ARTHUR AND THE WEEPING WILLOW 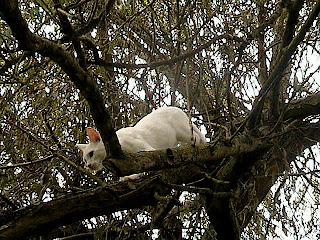 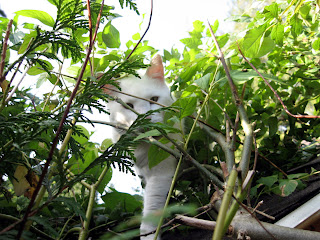 One evening we heard a wailful crying, it sounded like a little baby. But there are no babies around here.

Mr. Gattino got up and checked the garden. The crying came from our weeping willow tree. Approaching in the moonless night he saw a white spot far above him, on a branch.


"Arthur" he shouted "is that you ?" I waited for Arthur's answer responding "yes" but Instead I heard his continuing songs. Mr. Gattino hurried me to look after a pocket lamp as he could see nothing. I ran over to the house and put everything upside down to find the lamp, while I heard Mr. Gattino shouting "Got the lamp ? Where are you ?" as if I had disappearded to the north pole. Finally I found the lamp hidden in a drawer where I hadn't looked in for ages, catched it and returned running. He took the lamp and pointed it to the white spot. Arthur, squinted in the sudden light and stopped singing. He only greated us with a very little "meauw", which made our hearts melt.

He was sitting there on a branch and looked down to us. Mr. Gattino started swearing in his discret opera voice, as usual in italian, when he doesn't like a situation. It was past midnight and the neighbourhood slept. I suggested to take a ladder and try to get Arthur down. What he did, still swearing. It's amazing what Italians have for a treasury of words ! And on top of it, it sounds almost nice and not so ugly as when you swear in another language.

By the time my next neighbor had opened her window and looked out. The scenery must have been worthwhile to watch. Mr Gattino in his pajama, swearing and fumbling around with the ladder, me in my old T-shirt reassuring poor Arthur again singing in the tree.

Finally the ladder was in the right place, Mr. Gattino climbed up and told Athur to jump on his shoulder. Arthur found it very funny that his beloved canopener also wanted to sit in the tree and welcomed him by scratching his nose. The canopener sweared a little louder.

Then Arthur suddenly turned around and jumbed on another branch. No way to catch him. I called Arthur and told the hysterical Mr. Gattino to calm down. By now Arthur had reached the lower branches and like a dart jumped on the grass just besides my legs. Then he sat down and looked up, wondering what his canopener did up there.

Mr. Gattino was still sitting on the ladder in the tree ... and if he didn't climb down he still sits there.

But he finally got down, said "good night" to the neighbor and disappeared with his ladder. Arthur and I returned in the house where he throw himself on a bowl of good catfood.

This story happened two years ago. Since then Arthur is still climbing on his beloved tree, but not so high anymore and he manages also to climb down !

I very much enjoy the way you tell Arthur's stories, Gattina! And how supremely cat-like for him to jump down out of the tree while in the process of being rescued and stare up at his rescuer/canopener. LOL!

I am posting a little bit early as it's still Monday where I am, but since you had Cats on Tuesday up and running, I thought, why not? I hope you don't mind!

The continuing adventures of Arthur! LOL Our cats get as high as the back of the couch! They don't like the outdoors, unless they are watching it from the safety of inside! LOL!!! D :)

That's such a great story, Gattina! Thank you for giving me a chuckle after a day like I had today. I could see it all happen as I read it. Have a wonderful week!

LOL Arthur! Did your canopener give you the bowl of good catfood after what you put him through hehe :) Great story, be careful up there on that willow tree! Happy Tuesday :)

Oh Gattina, I have never laughed so much, especially about Mr Gattino swearing in Italian! Poor Arther, he must have got vertigo, never being that high before.

Oh that was so funny...you can write a really hilarious story. That Arthur is one comical cat.

Arthur, you look very handsome sitting in the tree. You are a very brave cat to climb trees! I'm only allowed outside on my harness or in a stroller, so I am amazed by all you cats who are allowed to roam free!

I'm glad to hear you no longer climb so high that you can't make it down on your own. It sounds like your humans weren't too happy to have to try to fetch you down!

That Arthur sure gets up to some mischief. At least he's going outside again !!
Not sure if I'll get in a Cats on Tuesday today ... huge apologies if I don't.
Take care, Meow

The continuing adventures of Arthur! Woww!!

Oh yes I know this. Luna is climbing through the bathroom window on the roof. What an adventure!!! I sweared I would let her there but...
I can imagine, you and Mr. Gattina and had to laugh , sorry :-)))
Aber es ging ja nochmal gut, but it takes a good end .

I was just looking at weeping willows to purchase for our yard at Lowe's yesterday. I think they are magnificant trees. Loved your photos as always!

I think it is pitiful when they get stuck in trees. Darius did once for an entire day and night before I married and moved here. When I was younger and still at home we had this wild kitty named Taca who twice we had to get the fire department to get her out of a tree!

ha-ha-ha HA. Can't believe it. I should have liked to be your neighbour. Top entertainment:)).

Felicia is down from the tree too. But she was quicker than I could follow - with the (video)camera.

Arthur is a mischievous one isn't he?

I am back... I will try to not go MIA again... life just got hectic there for while

What a great story.

Whew!! That is quite the trauma. I have heard a saying that if cats got stuck in trees, you'd think you would find more skeletons up in trees. I think they just like to see us act silly trying to get them down.

Mine is finally up. Late, I know. But it is still Tuesday here....(wink)

You're such a great storyteller! I always get a good laugh from your posts!!!!

Hi Gattina! I followed your suggestion and posted Nermal's bath pics as a WW! Happy WW :)

Arthur certainly loves his mischief. It is just like a cat to climb down the tree, then look up at his would-be rescuer.