The weather was nice so I took the opportunity to clean the entrance which was full of moss and looked rather green. With the help of a lot of chlorid in a bucket I scrubbed the whole entrance length. 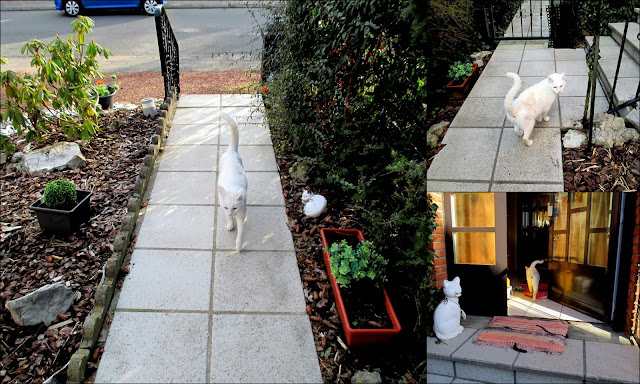 assisted of course by Arthur, who checked the finished work, was satisfied with the result and returned inside.

My friend Dominique is on holidays and we "babysit" her budgies. Arthur loves them ! 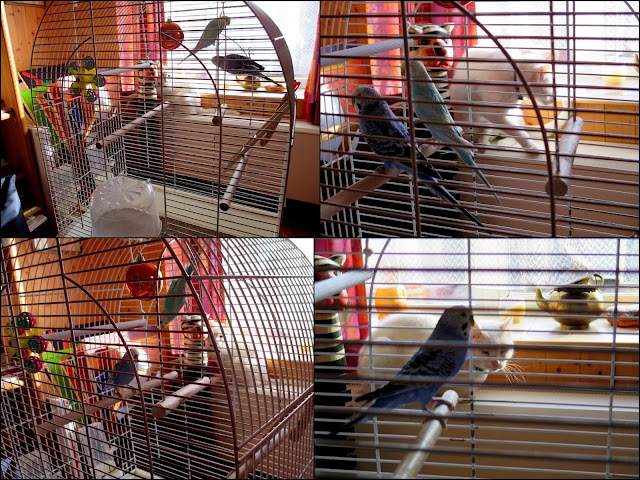 He doesn't try to jump at the cage and try to kill them, no, he sits just there and watches them. Apparently he is a cat ornithologist. Of course I wouldn't dare to leave him alone with the birds, they sit safely in the guest room with a closed door !

I tried to film Rosie when she makes these roaring noises chasing her mousies. Of course you just hear a little roar at the beginning and then she stopped. 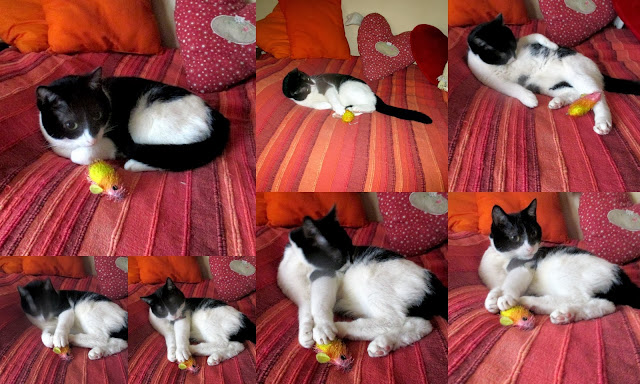 and at least on the photos you see the mouse ! No wonder that after that she slept the whole day. 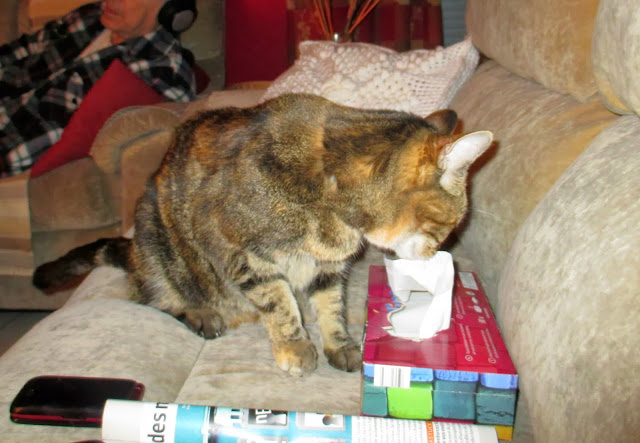 Good old Pookie is always looking for something to eat, since she shows the first signs of becoming an oldie, her first interest is food. She was rather disappointed that tissues are not eatable.

Kim is the ideal cat for somebody who doesn't like to write, because there is nothing I could write about her.

Ever since it rains and storms outside, my cats "storm" through the house too, except Kim of course who watches her siblings incomprehensible behavior stoically. 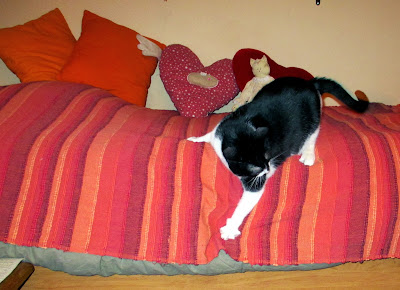 Rosie hunts invisible mousies in my room and like an arrow from one side to the other on my bed up and down and makes loud growling noises, difficult to describe. I have never heard a cat doing this. 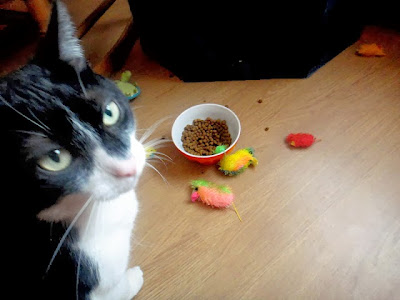 When she is not busy with her crazy hunting, she collects her mousies and apparently tries to feed them.

Or she gives them a bath. Pookie doesn't bother as long as she has to eat. Now that she has become an old lady, and has difficulties to climb on the sofa she only has three things in her mind. Food, talking and hissing at Rosie.

But she tolerates Kim laying besides her. 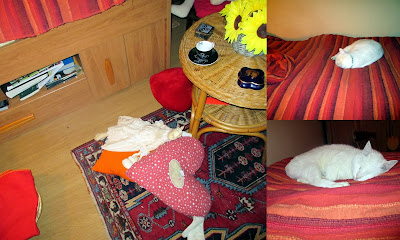 Yesterday evening preparing my bed for sleeping, I throw all the cushions on the floor as usual. But one cushion resisted and suddenly had a paw with claws and scratched my hand. Absentminded I had taken Arthur for a cushion and wanted to throw him on the floor too. He was not offended, turned around and continued to sleep. 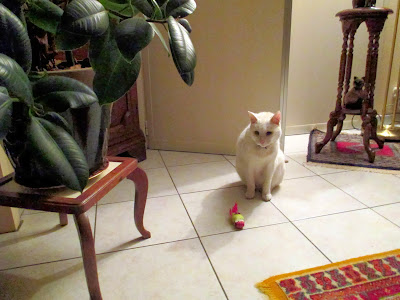 He still rumbles through the house playing with his bird, which apparently is very solid. 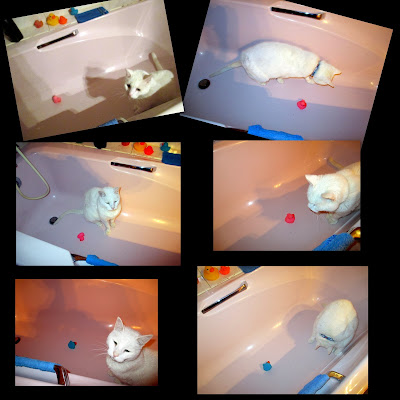 He also has discovered another noisy toy little ducks which he throws around in the bathtube ! From time to time he interrupts himself to use the bathtube for what it is ... to wash. 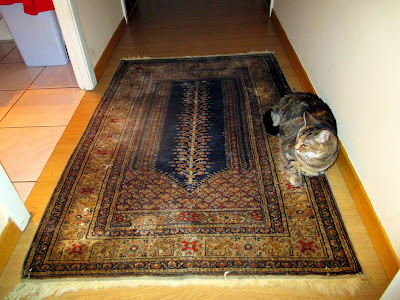 while Pookie sits outside the bathroom, and watches Mr. G when he shaves.

At 3 am I woke up because I heard somebody rambling through the house. I got up to see what it was, maybe a neighbor's cat who looked for something eatable in the kitchen, but what I saw was this : 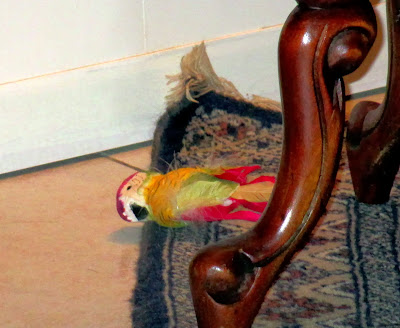 The stuffed bird which used to sit in the flowers of my season basket. It looked a little uncombed. I just saw Arthur disappearing to the basement. I returned to my bed, not very happy about the interruption of my precious beauty sleep. 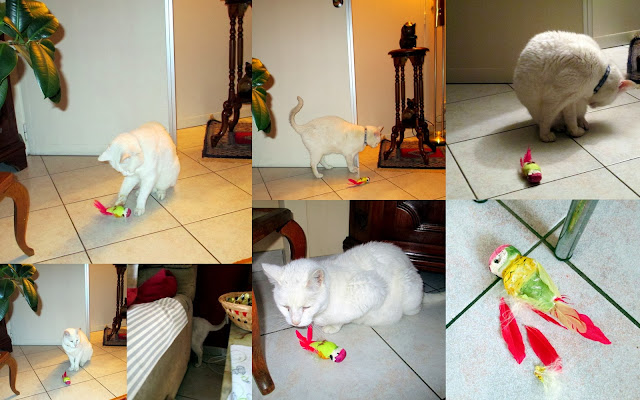 And then the next day Arthur was playing with this bird ! It is out of plastic and makes a noise like a ping pong ball. He threw it in the air caught it, put it behind the sofa, then couldn't get it out anymore, meowed until Mr. G. took a broom and got it out. As it's raining and cold and no real bird in view outside, Arthur has found a replacement. Now the bird has no feathers anymore, but he still is busy to play with it. 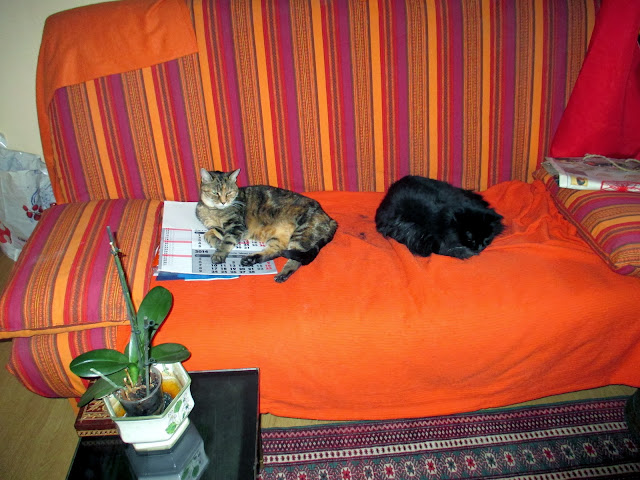 Kim is mostly inside now and follows Pookie everywhere, just as she did  when she was a kitten and took Pookie for her mother. But she still is the "autistic" cat. Unfortunately Arthur has discovered his love for her and runs behind her for playing, what she doesn't like at all as she had never played in her whole life. I wonder if spring is in the air despite the still cold weather. Anyway we don't risk to have  black and white striped kittens. 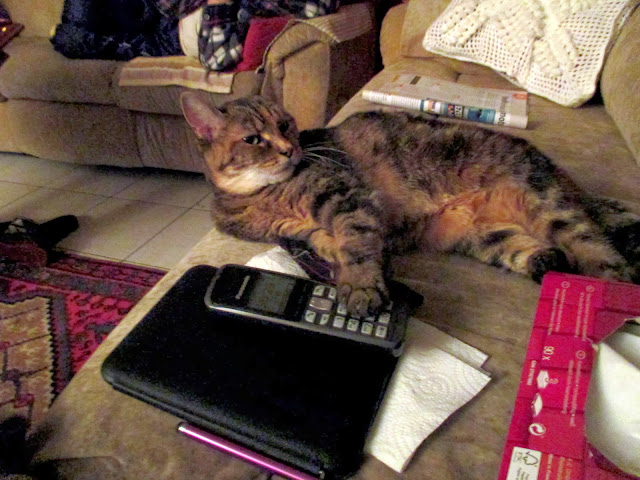 Pookie only thinks of food now and follows me everywhere, lifts herself with difficulties on the sofa and is happy. 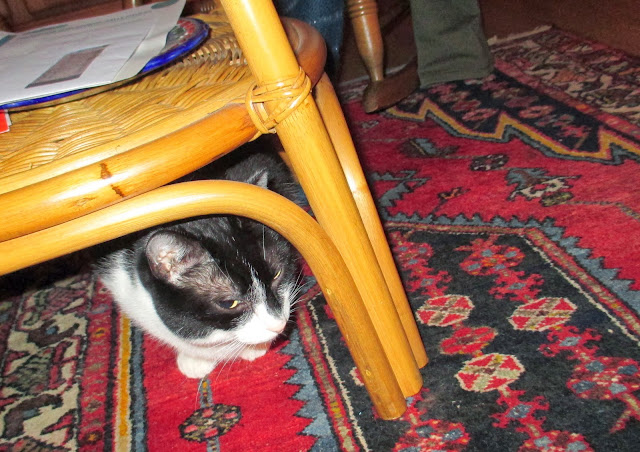 Rosie doesn't like the new behavior of Pookie especially the fact that she now is always in my room and often lays besides my feet. She is jealous and ready to chase her away and then the hissing starts. I try to settle this conflict as the UNO does with Israel and Palestinians, Syria and other wars exactly with the same success.

Pookie shows the first signs of becoming an old lady physically and in her behavior too.  She will be 16 this year and she can't jump anymore.

and fortunately still manages to climb in Mr. G's bed. When she walks she looks normal, but no way to jump on a chair or on the sink in the kitchen what she loved to do to drink water. She only tolerates Kim close to her and has started to hiss at Arthur which she had never done before, and of course Rosie. She also meows a lot and has become a very talkative cat ! She "speaks" all the time. And as so many old ladies do, she eats a lot but has lost weight. She isn't skinny, but not the round cozy cat anymore. According to the vet she is in good health and there is nothing to do with her hind legs. It's arthrosis. 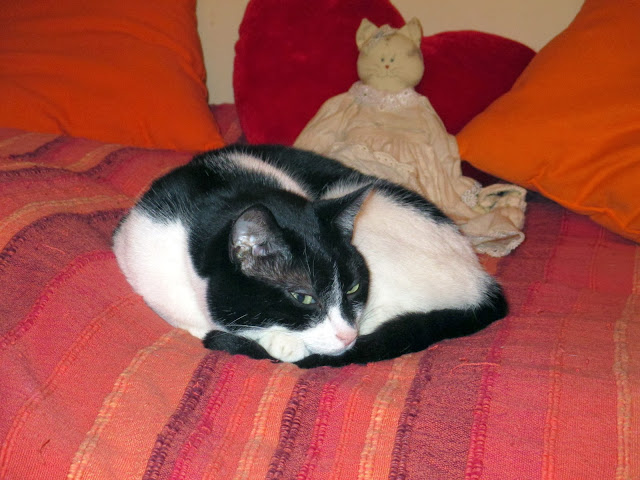 Rosie as all cats don't know what pity is and is rather happy about this situation, she has my bed all of her own it is too high, and as you can see from her look, she has seen Pookie enter the room ! 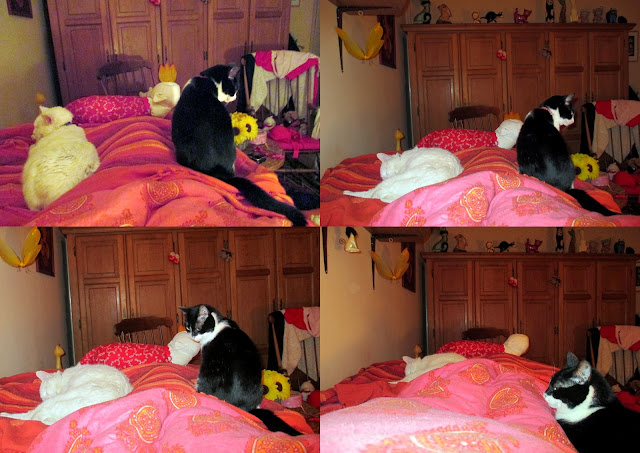 Arthur the philosophe doesn't care, he sleeps where he wants and doesn't bother about Pookie when she hisses at him. 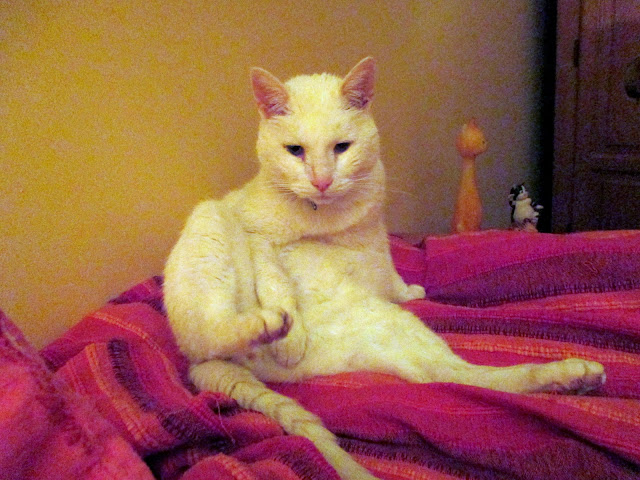 He has a lot to do to keep his fur white, outside it's quite muddy !

As usual he terrorizes Mr. G. and yesterday when he was laying in the bath, Arthur managed to open the door wide, letting in cold air which made Mr. G. shout at me to close the door again. This happened 3 times, because Arthur doesn't want to stay long in the bathroom and meauws and scratches at the door to get out. I open the door and then the whole story starts from the beginning !

If only the rainy days would stop so that he could use his energy outside and I could stop being his doorman !