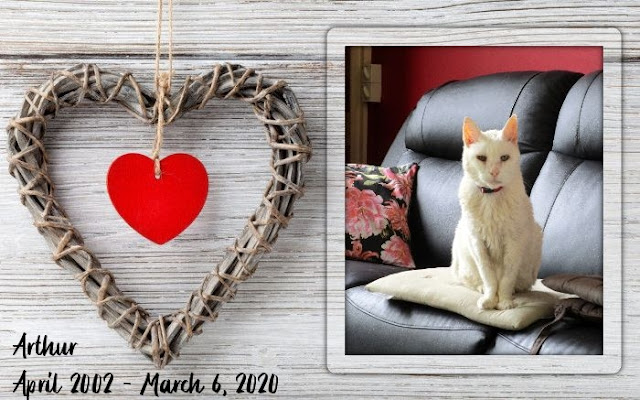 After 18 years of life together, Arthur fell asleep forever. He was sleeping on a chair when the vet came. He didn't even wake up he just opened an eye and closed it when he saw that it was me. He didn't see the vet. He just continued to sleep and after he had gotten the final shot without moving a bit he was gone as you say "over the rainbow bridge"

You can easily imagine how hard it is to loose a family member, but it was really time for him before he started to suffer. Despite the fact that he ate a lot, he was so skinny and all bones. The outside of his ears were infected and apparently he had started a skin cancer which happens mostly to white cats.

I am not able to write more I feel as if somebody has hit me with a hammer and Mr. G. couldn't hide some tears. I join a few photos of his life. He was such an intelligent, social and funny cat, we had so much to laugh about him with all his adventures. I will write about him when I can.

Now Rosie is the only "child". When she arrived they were four and one after the other passed away after 18 to 20 years of commun life. Rosie is  12 now we hope she will stay with us until she can go into the Guiness book of records. 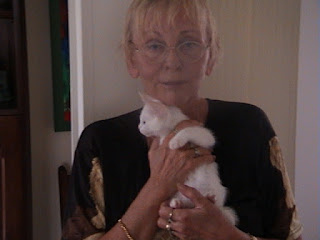 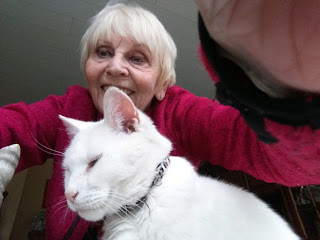 Between these two photos 18 years went by 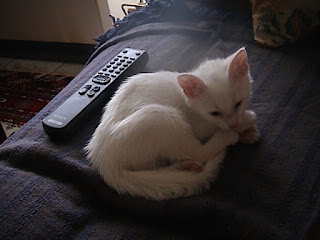 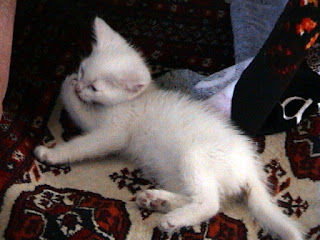 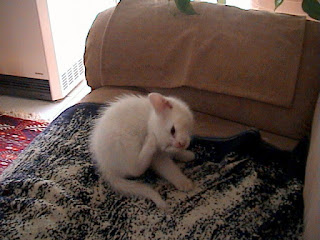 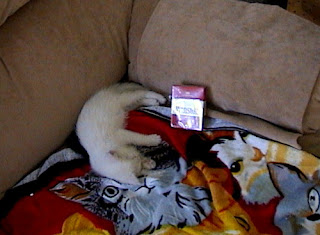 He didn' take much space on the sofa 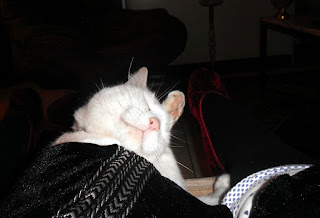 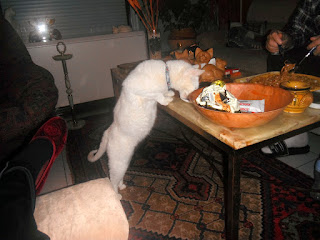 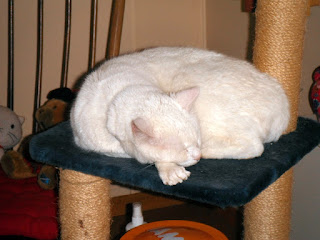 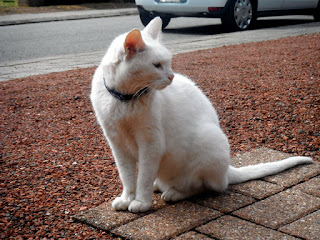 Sometimes he also used the cat tower or sat outside on the tiles and listened to people walking by "What a beautiful" cat ! 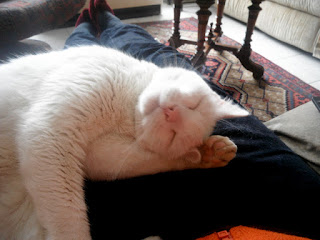 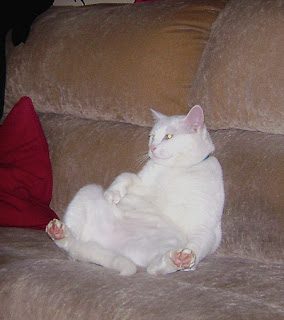 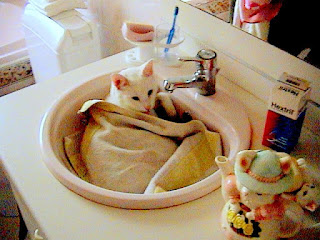 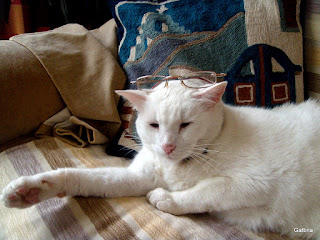 Once I managed to give him a bath, that's when he was not white but black, he had "worked" as a mechanician under a car. He also was the best model for all photo memes.

I could write a whole book about Arthur and maybe I will do it when his absence hurts less.
Posted by Gattina at 2:00 AM

I am heartbroken for you. It's so hard, even when you know it is time. Lots and lots of purrs to you, and Mr. G, and Rosie too.

From a cute kitten to a stately old gentleman you were a wonderful and much loved cat Arthur and you will be missed. I think Rosie will miss you too.

Oh no. This is desperate news and we send you our best condolences on your terrible loss. I know you will miss him.

Arthur has been a part of my week since I joined the selfies and now I will be without our shining Arthur, the cheeky boy and our handsome man cat.

Arthur I will miss you.

Arthur, You will brings alot of joys to all the other Kitties at the Rainbow Ridge.

Your news brings tears to our eyes. We have loved reading and being a part of Arthurs world, along with Rosie, Kim and yourself. Our deepest and heartfelt sympathy goes to you all at this time....
We will wait with much love in our hearts to share once more with you, your special memories of a very special guy.
Gentle purrs
ERin and Mrs H

Oh, we're so sad to hear this. We will miss him lots! Purrs and hugs!

Author had a long live filled life with you. He was one of the lucky kitties. I know you will miss him terribly but he is young again and healthy, waiting for you at the rainbow bridge. He will visit you in your dreams. Sending hugs of sympathy from all of us. It is so hard to say goodbye.

Gattina, we are heartbroken to read this sad news. We have loved Arthur from afar, and are sorry he was needed at the Bridge. Thank you for sharing this special boy with us all these years. Love, hugs, purrs and prayers to you, Mr. G and Rosie.

Alasandra, The Cats and Dogs said...

We are so very sorry to hear about Arthur. Purrs of comfort and paws of sympathy from all of us here at ATCAD

Sweet boy, we will miss you so much. There are heartfelt tears all over the world at your passing. Thanks to your Mom for sharing your beautiful self with us all. Sending purrs and prayers to your grieving family, be well Mom and Mr. G.

So sorry. It is just way too hard to lose our fur friends. Sending lots of hugs.

We are so sorry to hear about Arthur. Sending you many comforting purrs during this very sad time. :(

I am so sorry for the loss of your sweet boy. XO

Another Giant has gone to the Bridge to meet all of his Angel friends and we know Arthur had so many. We send our purrs and prayers of support at this sad time. We know Arthur is looking down with love and remembers all the wonderful times you had. Arthur dear friend watch over us from the Bridge and we will all meet again to nap in the sunshine and enjoy purrs with those we love.
Timmy, Toby, Rumpy, Miss Fitz and Einstien

Arthur was a blessing to you.

I am so very sorry at Arthur's passing. What a beautiful mancat he was and so obviously a deeply loved member of the family. We all of us know how terribly hurt you are- and Mr. G...and what a loss it is to you both. Please accept my heartfelt sympathy.

Fly free, sweet Arthur - young and healthy again, and with all your friends who Have Gone Before. We know your people (and those of us who knew you through them) will miss your very much, but you will never be forgotten and we are sure you will still be around a bit to keep an eye on those who love you.

Was Kin the first to meet you there ?

I'm so very sorry for your loss. What a wonderfully long life, yet we never have them long enough.

Thank you for sharing these memories with Arthur. He was such an adorable kitten and grew up to be a very handsome boy. He was such a character. I always loved reading about his mischief. Hugs to you and Mr. G.

Awww, my heart hurts for you. Your story about him was so poignant and special.
I wish I had had the pleasure of knowing him...
Arthur will be in your heart forever.

We are so very sorry to hear about dear Arthur. Purrs, hugs and love from all of us.

Farewell to your beautiful boy.

Arthur what a handsome mancat with such beautiful plush furs...run free dear one
Hugs Cecilia

We did not have the honor of knowing you Arthur, yet we wanted to say how truly sorry we are. Godspeed your journey to heaven ~~~~~ ♥♥♥

Oh, I am so very sorry for your loss. Arthur sure is a handsome ManCat. And it looks like you guys had lots and lots of funs together! Sendin' lots of love, {{hugs}} and tons of AireZens your way.
Kisses,
Ruby ♥

I put Arthur in my angels. Big healing hugs. ♥

We're so sorry to hear about Arthur. We send you comforting purrs and gentle headbonks. Purrs

We are so, so sorry for your loss. Arthur had a wonderful life with you. We are sending lots of healing purrs to you.

I am so sorry to hear of Arthur's passing. He had a long and wonderful life and will be greatly missed.

So sorry to hear of Arthur's passing. Hoping memories of all the love you gave him will help you through. - Kitties Tom, Bridget
and Julie Mackenzie xx

I am so sorry for your loss. Thank you for taking the time to share the wonderful photos. Arthur was an adorable kitten, and a handsome cat. I hope the memories of 18 wonderful years bring you comfort, now and always.

Arthur sounds like a cat I wish I had known. What wonderful years you had together, but it is never, ever long enough. May you find comfort in the memories, even as everything in you wishes he was here and healthy. Amy

Arthur sure was a handsum boy. We're so sorry fur your loss. We know how hard it is to lose family. There's never enuff time. We're sendin' hugs and purrayers fur all.

We are all very sorry to hear about your dear Arthur. Sending many purrs and prayers.

I came over from the Cat Blogosphere site when I read that Arthur had died. I wanted to extend my condolences. Arthur was clearly loved and had a good life; I am glad that his end here on Earth was peaceful. I sometimes become angry that more people don't know the wonderful cats we know and love, but then not everyone is as privileged as we are. I can well understand why people would compliment him when they saw him: he was beautiful. God bless you in your sorrow, and Godspeed, Arthur.

So deeply sorry of the loss of your sweet boy, Arthur, Gattina😿 Soft Pawkisses to comfort you and Mr.G🐾😽💞 Fly free beautiful Soul💗

Cody and I are very sorry to hear about the loss of Arthur. We are sorry we didn't know him. It is special to have a kitty for 18 years...my Angel Bobo went to the Bridge when he was 18 as well. Sending (((hugs))) of comfort and our deepest sympathy.

Gattina, I'm so sorry for your loss. Me and Arthur have known each other for nine years ! It's heart broken. Hugs to you, Gattina.
Sending soft purrs to comfort you.
xox

So sorry to hear about Arthur. He was a special boy we're sure. Sending love and comforting hugs.
Joan Ryan and Grady Lewis

I made a memorial card for your dear Arthur, to help a wee bit to send you some comfort... It will be in your email soon. And next selfie g[blog hop,I will add it there too.

While we did not know your beautiful Arthur, we learned of his passing to the Bridge this morning and just wanted to send you a HUG. Partings are very hard. We know - but we also know that the joy they bring to us for however long they are here is immeasureable and not to be missed but cherished forever. We hope time will heal your broken hearts....Arthur will ALWAYS and FOREVER be with you.

We are so furry sorry for your loss. Even when you know it's best for them to go, before they start suffering, it is neffur easy. We send you comforting purrs and pawpats.

Fly free, sweet Arthur - safe in the paws of the Great Cat in the sky.

So sorry for your loss.

Thank you for sharing him with us💔😰 It is one of the hardest decisions we have to make as pet owners🥺😭 My heart hurts for you. Fly Free Arthur. Until you meet again xx