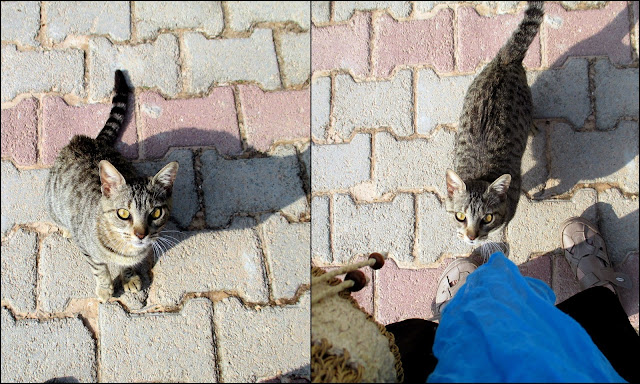 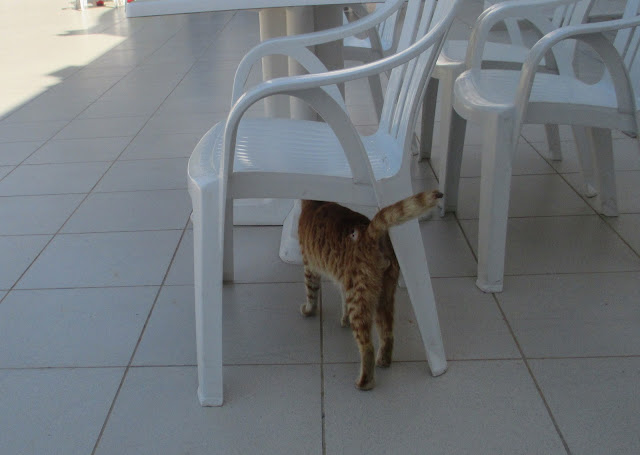 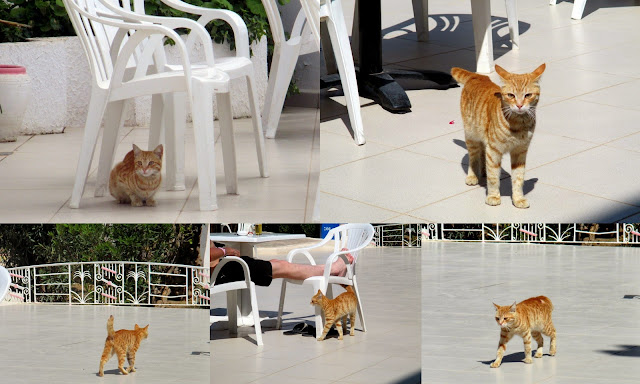 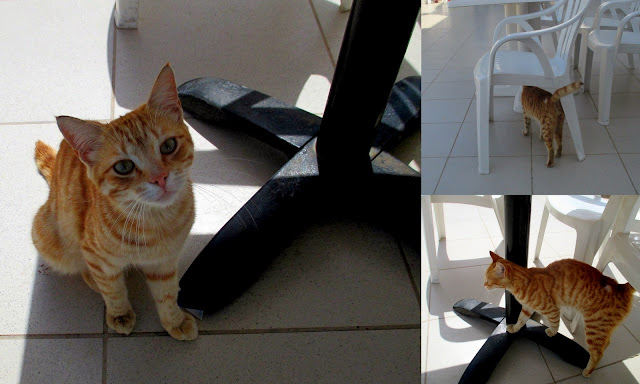 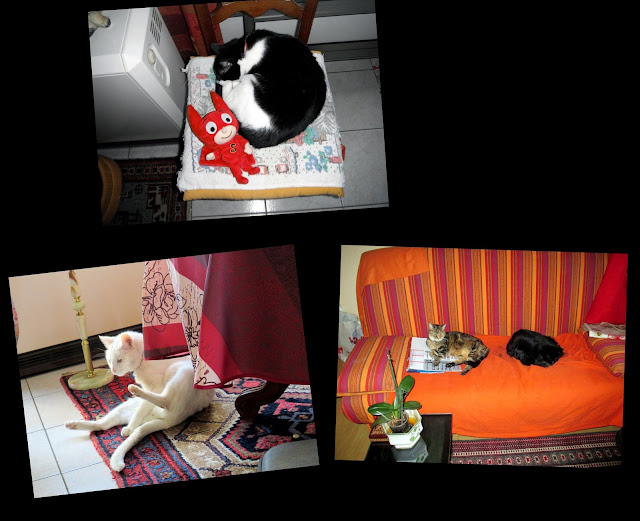 This post is scheduled. When you read this I am probably laying at the beach in Tunisia and enjoy the sunshine for a week. Mr. G. as usual will spoil the cats ! 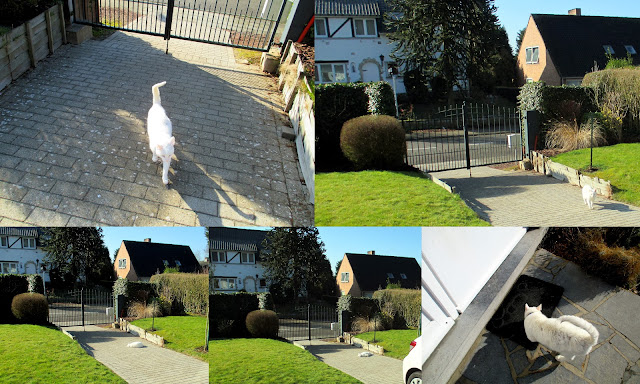 When I said good bye to Dominique my neighbor, my body guard Arthur as usual walked me til her entrance, where he sharpened his claws on her doormat. Then he waited sitting outside until I came out again.

My hair producing Kim is worse then a sheep ! She was again full of knots and I had to take her to the groomer. As usual it was a nerve-racking enterprise, which took me at least 15 min before she was finally sitting in her carrier and in the car ! 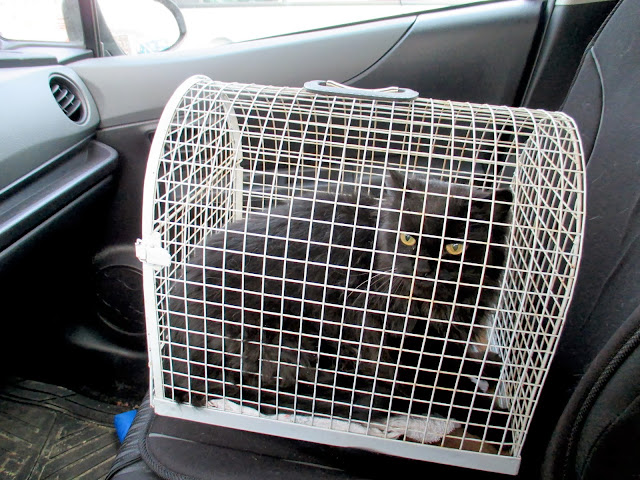 Once in the car she didn't protest too much but meowed pathetically the whole way long. 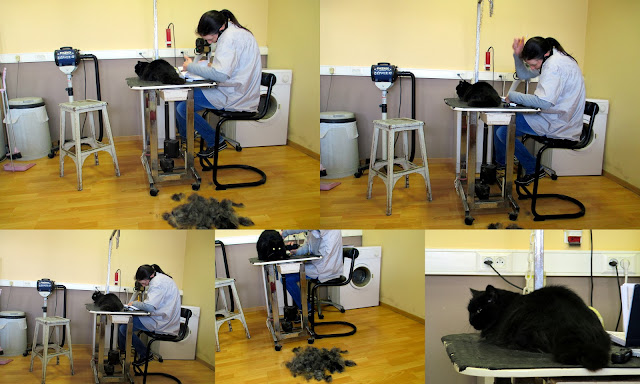 From the moment on she sat on the table she didn't move anymore and even purred, and during the grooming procedure, the phone rang, the young woman picked it up, took her notebook and wrote an appointment down, and Kim didn't move at all, she even made herself comfortable and closed her eyes. And I am not even allowed to show a brush, she runs away like a flash ! The amount of hairs coming out of her fur was quite impressive. 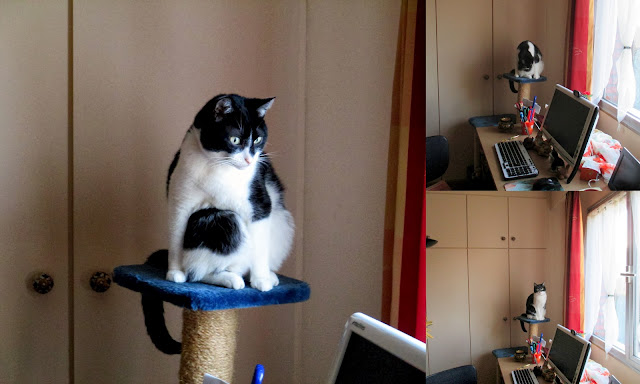 Rosie loves to sit besides me and we do our neighborwatch together, while I was busy on my computer 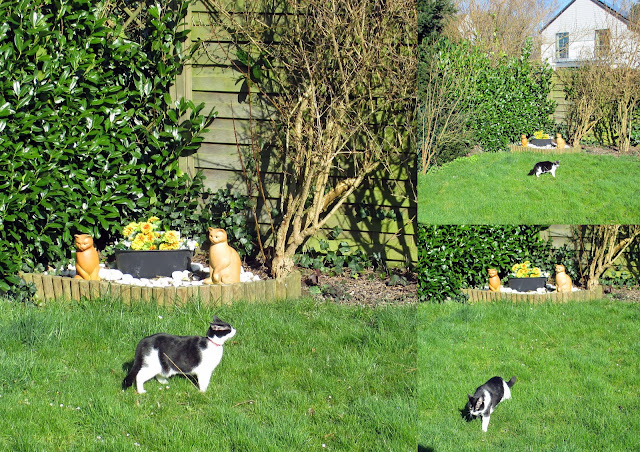 Spring weather had moved in, and a new neighbor dog too, so she smelled the new dog safely behind the bushes. 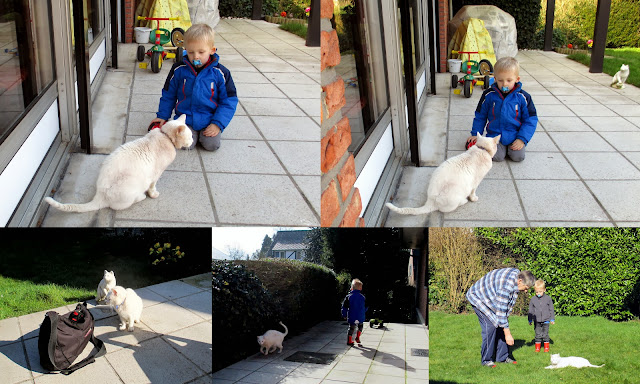 Arthur was in his element. He had the visit of little Toby ! He was always with him, ran behind the tricycle, played football (soccer) and with the little cars. When Toby saw that Arthur was eating grass, he pulled out some grass for him and put it on the terrace and was a little disappointed that Arthur didn't eat it. So he took a broom and cleaned my terrace ! Arthur found this very amusing and tried to catch the broom. It was very funny to watch them both.

Pookie becomes a real pain in the neck ! Now she has started to meow operas when I am not awoken at 7.30 am at the latest. She had never done this before. 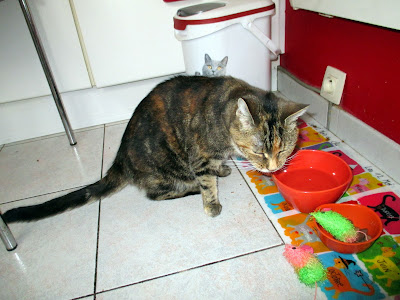 She eats her breakfast and 2 h later she is again asking for food. Maybe it is because she doesn't or cannot eat the dry food anymore. Even if there is food left in the other bowls, she insists and never gives up! 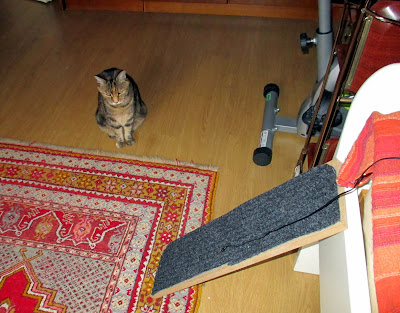 Mr. G. forgetting his arthritis has made a board for her covered with a carpet so that it's easier for her to get on his bed. Pookie so far only plays with the string and hasn't understood yet for what this thing is for. 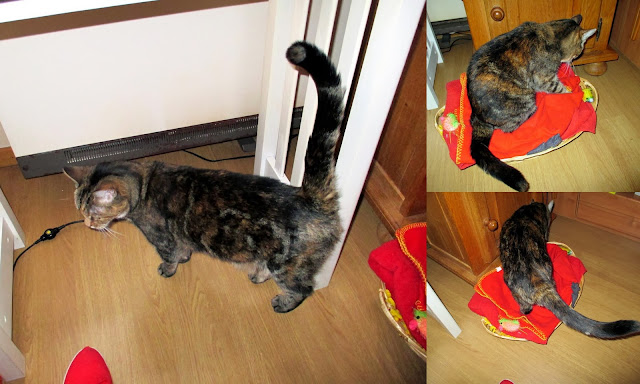 She also is always with me under or besides my desk, of course only when Rosie is not around ! Rosie is like Putin, she defends her territory for the time being only with hissing at each other. 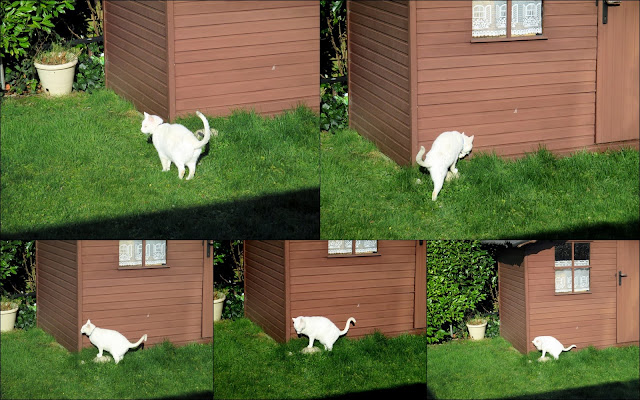 The weather was nice and Arthur took the opportunity to wash himself on the cat figurine, now hidden in the growing grass. No way to mow the lawn yet it's wet like a sponge. 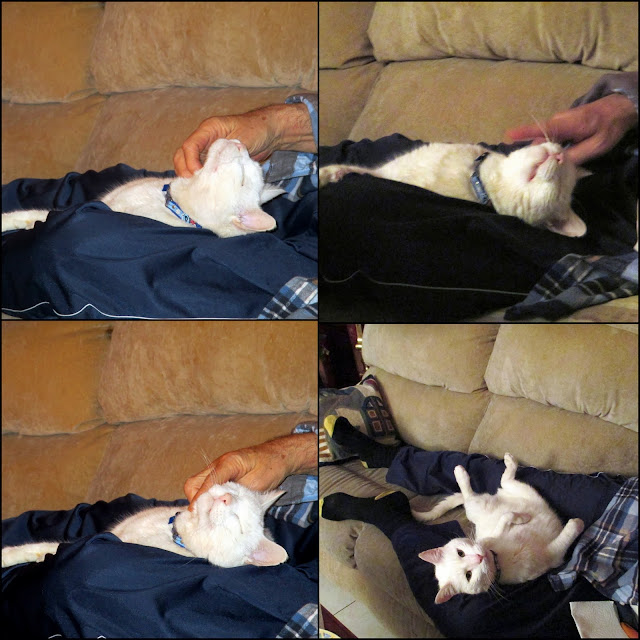 In the evening when he is back from his walks he watches TV with Mr. G. He distributes his affection very fairly between us, once for a few days on my lap and then he changes before Mr. G. eventually could get jealous. 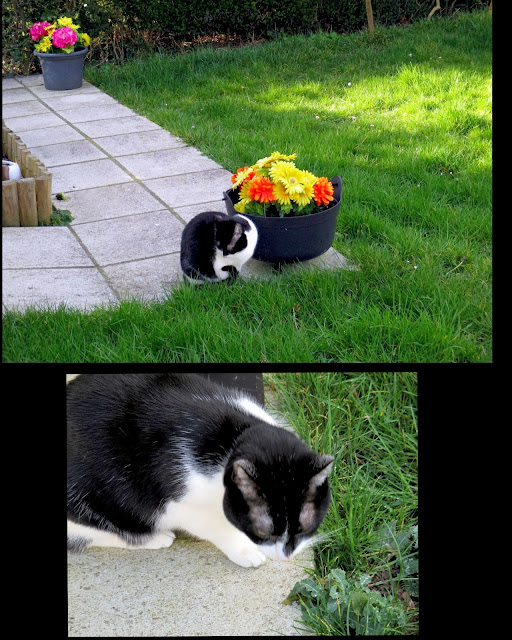 Rosie also went for a walk outside and sniffed at the fresh grass, and then ate a bit as salad, which she later barfed on the best carpet. 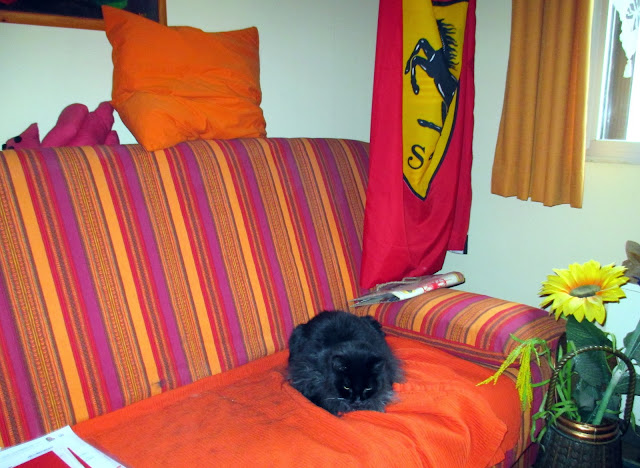 Kim leads her autistic life and runs away when she only sees me. She is full of knots again and on Friday I have an appointment at the groomer. I am already worried how to catch her and put her in the carrier !