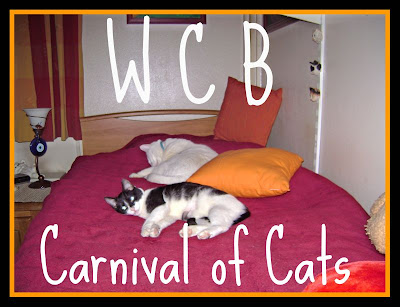 
Arthur warmed up his belly squeezed between two ceramic cats, when he had to move his ears (what an effort) because he had heard a noise. 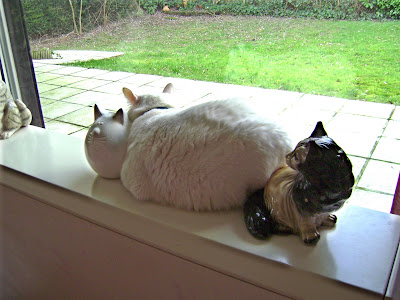 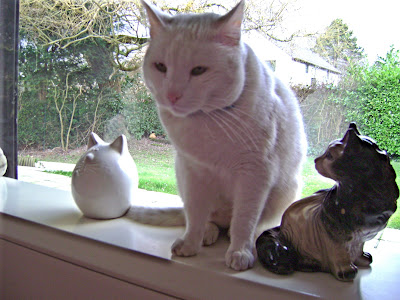 still half asleep he stood up and looked what it was. 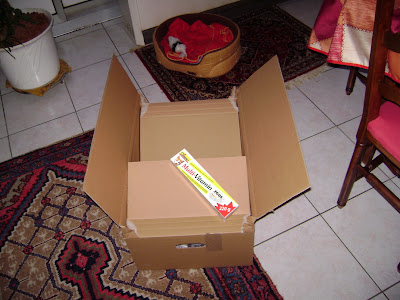 A parcel had arrived ! I was quite surprised that it went so quick. I had read on Luna's Cats on Tuesday post where she told us about treats she gives her cats. I found it at Zoo, which Dragonheart had already recommended to me for the little tent which his mum had bought him at Zoo.de.I thought that would be nice too for my cats and finally found it at Zoo.be an Internet pet shop with a lot of choice. I don't know why they had sent such an enormous carton just for two little tubes and a little summer tent for the cats. 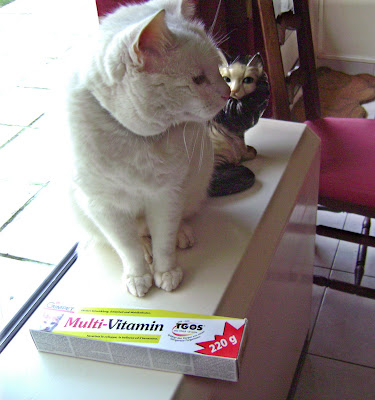 while Arthur checked to Vitamines 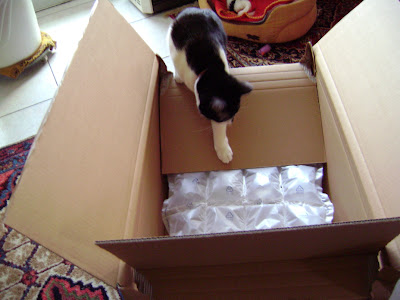 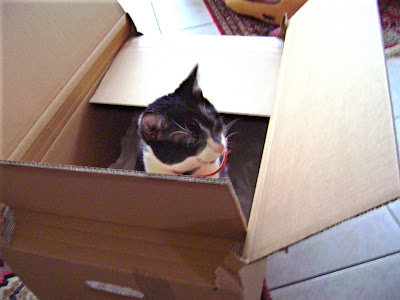 Rosie jumped in the carton and amused herself with it. Maybe this company send big cartons on purpose so that cats can play in them ?? 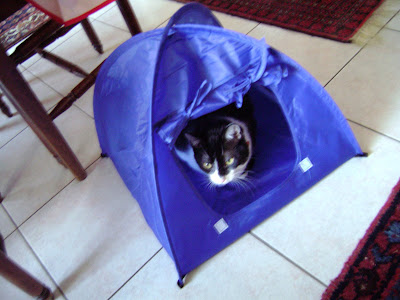 But as soon as Mr. Gattino had put up the tent, Rosie gave up the carton and squatted the tent for the rest of the afternoon !
Posted by Gattina at 7:41 AM

That's a great little Tent! I often find companies send huge boxes for little items but the boxes do make an extra treat for the kitties. Like kids they are more interested in the wrapping then the stuff inside.

What a wonderful tent!!!Something tells me one may not be enough. Arthur sleeps well in between the two 'cats',heehee
I like boxes too!!!!
Purrs Mickey

Hi I keep trying to get into
your Main site for Kelli's
show & tell - my PC freezes
don't know why???
Anyway love this cat site-
maybe want to write cat
stories, I have many stories
and cats, I have 4 cats.

Oh, I bet dat da company is smart and knows dat we cats just love a nice box! Have yoo guys tried to stuff all five of yoo in da tent at da same time?

You look so cute all snuggled in between the figures, Arthur!!

That looks like a great tent, we recently made a tent out of a blanket hanging over the couch. Our beans were very impressed with our hard work.

What a great tent!!

There is no tent selling here, hahaha~! I think I have to wait something else instead of tent~~

Both tents and boxes are lots of fun to play with! Enjoy your new tent! :)

Around Your Wrist said...

treats and a box! wow!

not to worry, gattina, i won't tell anyone that you 'borrow' graphics.

by the way, you're welcome to share that one (although maybe not until tomorrow so it can be special for my girl?).

click the link at the bottom of the graphic to go to their site for lots of cool stuff.

Hey,
That is a great tent! I don't have one of those. I will have to go get mom to take a look!
--JB

Your cats are so funny, Gattina...and like all cats,know where to find the warmest places.

Those tents look great. We see them a lot on other cat's blogs - but I doubt if we will ever see one at our house...... Maybe if we follow Chey's advice and steal the staff's credit card and order ourselves, hahahahahahah!

We can see what a big effort that Arthur made to get up. As for the box, well it's a know fact that us cats love boxes, and that box is a great size for sitting in. Nice work Rosie for claiming the tent as soon as it was up.

That is a great tent!
I hope you feel better, Gattina. A cold is never fun.

I love tents. But yes, if they are a pet shop they should know that all cats like boxes and send a cat sized one to be played in.