The last three days we had spring weather in February the sun was shining and it was unusually warm 15 ° ! Apparently that had never happened since 1830something. Arthur didn't care about this unusual "heat" he strolled outside to see if there were some people outside their houses.

I was in my neighbors garden because I had helped her to carry a piece of a new fence. Arthur had heard my voice and greeting us with his opera meow he ran over and suddenly showed up from under the hedge. 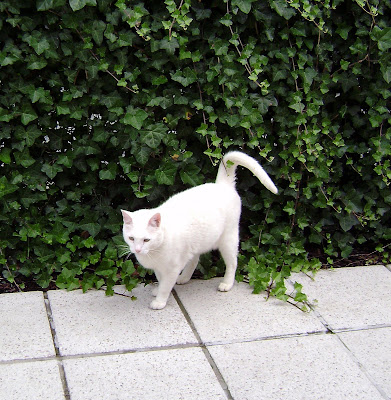 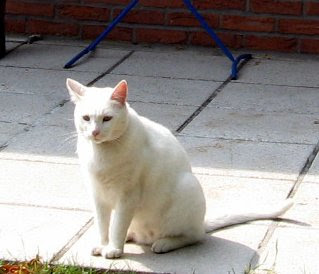 He sat down and listened to our conversation looking from time to time inside my neighbor's living room because his dog friend Yanouk stood behind the window, and they greated each other through the glass. 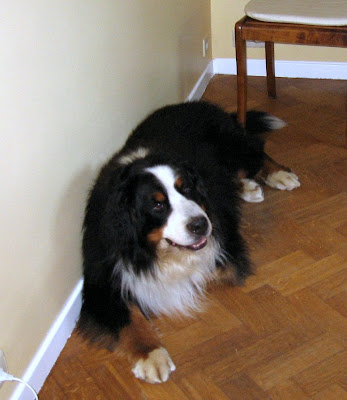 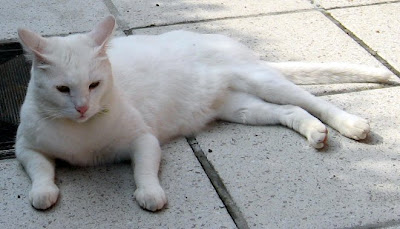 To show us how happy he was he rolled over and over between our legs and was very disappointed when I returned in the house. But my neighbor assured him that tomorrow if it is still so nice and warm she will dig little holes in her garden and he is allowed to help her ! Lucky Arthur ! 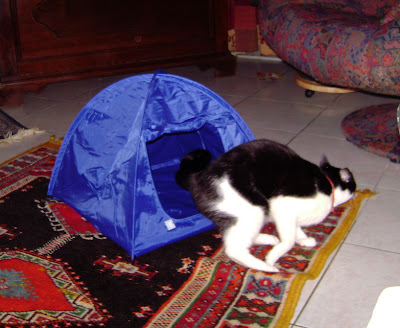 Rosie wasn't interested in the nice weather she had other things to do, she was too busy to collect her mousies and put them in the new tend, to run around and inside 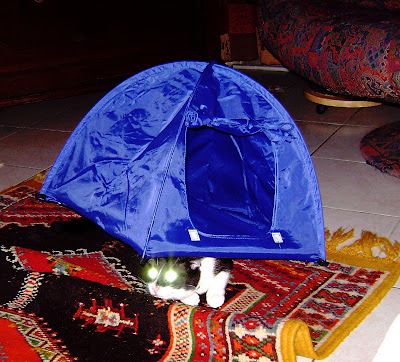 and even taking herself for a snail, carrying the "house" on her back.

It had been a nice day !

I am very happy right now Rosie has another place to collect the mice~~ Hehehehe~!!!!
Her laser eyes are classic~!!!! So touching my heart~!!

Rosie with that tent on her is one of the funniest things...you can't help but laugh. She is just a mess. A ball of fun. Arthur is lucky to have so many friends, friends kind enough to dig holes and let him help! Nice to have doggie friends too in this world! I love it when cats and dogs get along.

I can't believe how big Rosie is getting! It doesn't seem that long ago that she was just a little cat. I love her with that tent, too! LOL!

I wanted to let you know that I gave you an Award on my blog last night, but I wasn't able to provide a link to your blog. If you visit my blog, it would be great if you would include a link to this blog or whichever one you choose in your comment.

I thought the photo of Arthur with the bushes was great (is this why my boys are getting nasty? they can't spray the trees?). Then I saw Rosie racing around. Then I saw the video and I thought that was great. But then I saw Rosie's lazer eyes and I cracked up and burst out laughing!

I love Rosie's eyes in that last photo! She certainly appears to be having fun with her tent. How lovely that you have such warm weather (2 feet of snow here). Arthur must be so pleased. He can come out of hibernation now!

I am glad that you seem to be feeling better. Me too and I am back with COT!

Oh, I love Rosie's new tent!! how cute!
Hope you are feeling better, I posted a feline pic today :)

We're enjoying some warm weather, too.

But for this tuesday, we're hosting another cat-and-synth visitor :)

Rosie certainly loves her new tent, doesn't she? I laughed at her towards the end...she reminded me of Mitzi...mad cats!

Those are great photos of you, Arthur. We are glad you were enjoying the nice weather. It has been a very mild winter here in Munich, with warm temperatures and no snow! Rosie, you are certainly having fun with that tent!

Rosie seems to love her new tent! It's a good place to set up a ambush on her mousies.

Arthur, what great weather for you! You get to go outside and say hello to some of you friends, and tomorrow you might even get to help dig holes in the garden!

And Rosie, that tent has to be your best ever present, after your mousies of course. We love how you're racing around the tent and even underneath it. Great laser eyes too in the last photo.

Astrid (…and the kitties too) said...

Rosie is such a darling little lady.
We're in for Cats on Tuesday for the first time this week :)

I'm glad Arthur has a chance to go outside in winter! Arthur would be camouflaged here with our 30 cm (1 ft) of snow, but he would never venture out today since it's - 28C!

Oh my, I am just rolling over laughing at the cute video of Rosie, the house on her back like she's a little turtle and the adorable pictures of Arthur! I'm terrible at converting temperatures but I do get that the weather is abnormally warm, we're having a lot of that here in NJ too.

I can honestly say I have never tried to carry my tent around on my back. I'll have to think about that one...

With laser eyes on, no less!

That is a very nice tent!
Rosie is really having a great time being completely wild.
Arthur is a good neighbor ambassador

arthur, as always, so handsome and so friendly, lol

rosie is getting so grown-up, such a character though with her mousies and her tent!

I arrive a little late but I was busy at clinic with my mother in law for exams and it took finally a long time. What a nice video! A super reality show! Rosie is a star in her tent! I see Arthur took good time in the garden! Nothing better than a day with sun in february!

How cute is this?! That last photo is too funny! Rosie and Arthur have a great life!

PS. I brought my office PC, just to have the opportunity not to be all away.

Awwww, Rosie is just darling! It looks like she's having so much fun in her tent. And I hope Arthur has fun helping with the hole-digging -- that sounds like fun!

Belgium sounds warm, and at this time of year! My mom's cousins in Holland emailed and said it was warm there too and they were out sitting in the garden. I bet all the kitties are enjoying the warm weather!
--JB

I had a hard time trying to settle my internet problems that it is a waste that I could not join COT this week. I am still here to pay your cats a visit :)

Wow...Rosie sure has fun with the tent. I can imagine how messy it gonna be if my triplets were to get their paws onto one. Maybe I should get them one too. They have been giving me lots of claw marks sleeping on my laps all these while .. hehe :P

I like the description of Arthur's 'opera meow', lol.

Sorry I didn't get to participate this week. Hopefully I will next week.

The weather here is very Spring like too. Have a great day.