Arthur is bored. Since this stupid guy with his radiator (story below) had left, there had been no other visitors. He even had missed the post lady in the morning because of rain ! He therefore asked me to be his doorwomanman and open the front door. I took my camera and obeyed. 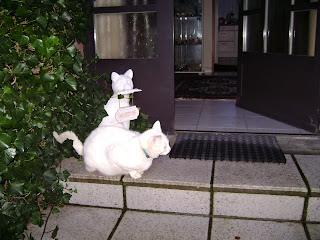 He looked out of the front door there was nothing, no neighbors digging in their gardens and no other cats around. After a while I told him to get in because I started to freeze. 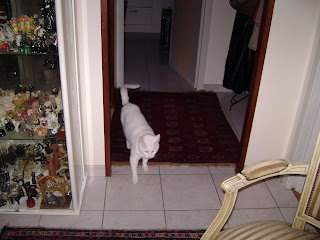 he went inside and turned around and around 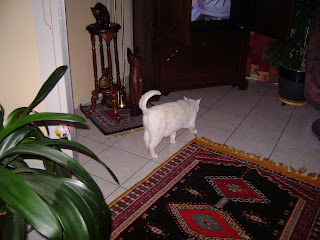 He checked the TV if there were any animal shows with birds singing to get a little excited, 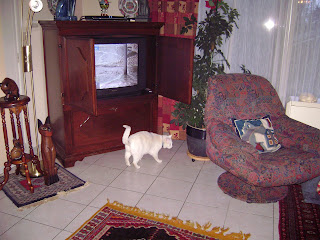 No ! nothing, not even that. 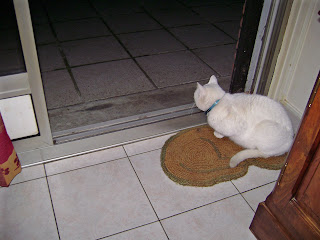 He asked me to open the back door. I did. There too he sat for a while, but nothing moved not even a little twig.

Finally he gave up and jumped on the sofa to join Rosie for a nap. But there he was wrong ! Rosie didn't let him sleep so easily, she has become a very energetic little cat woman ! She sniffed at him and probably found he didn't smell very well. I could listen to the following :

Happily he slept there the whole afternoon, until an empty stomac woke him up and directed him to the food bowls.

Poor Arthur, it's a shame he can't come a play with Boots she always wants to play.

Aww so cute! How can Arthur ever be bored with Rosie in the house? :D

*giggle*, Arthur is by Rosie the way I am by MaoMao! Sometimes I play with him, but he can be so hyper... often I go to seek my own space.

Well, I'd certainly like to pick the award up...but Mitzi hasn't yet reached the stage of lazing around...see my Cats on Tuesday post.

I can't wait until she does start sleeping all day...at least I'd get some piece or else I could annoy her...getting my own back!

Life on earth would be heaven if all males listened to all women as Arthur has listened to wise Rosie! We sort of have the same themes today!

Arthur has nothing to do? It does not sound right. My Jon practically spent his time doing the escaping act most of the time. I wonder what he did with his time too. Jon was never near Jess for sometime now with his "God knows what he does" time. I guessed when a tabby is busy taking care of the kitties, he would be busy "romeo"ing somewhere else...what a typical tomcat :P

If you are free, do check out my triplets' one month birthday "hacked-my-blog" post which is just below the COT post.

I'll be back for more commenting once I'm free as I'll be busy helping out in the pre-Chinese New Year reunion dinner preparation at my parents' house these few days. So, see you all later. Have a nice day :)

By the way, I had a good laugh at your captions for the slide show. They are good. We should have more of this in COT :P

Isn't a cat's life wonderful? If I get run over by a bus, I'm coming to live with you as a cat.

BTW We were awarded Blogger of the World by Kitikata whose ginger stripes are so much like Au's, Target's and our old Scoop. I'm not sure what the award is for but Colin who created it says it's used as a meme. So here goes:

I'm passing this Blogger of the World award along to:
Gattina who keeps all us cats together on Tuesday;
Meeyauw whose wildlife pictures of Vermont are so inspiring;
Sharlene whose very spoilt Spice Cats give me hope whenever I see the state Malaysian stray cats are in!

I love that slide show!

Poor Arthur so bored.
My cats are going to sleep til spring I think!

P.S. Thank you for making the Award!
I gave it to my Zander kitty for his marathon naps!

Oh it is too funny your slide show. I enjoyed it so much this morning.
Poor Arthur... perhaps he can catch some birds today ? Luna catched one last Saturday and come into the house with the poor bird. I hounded her out of the house with the bird.

Oh, your award is great, I pick it up too this evening!

That's a great Slide show Arthur and Rosie! You are both so cute. Arthur come on over to the card room. My typist took a nap before she finished getting the room ready. It's open now so come on over and play some cards. Maybe I can get Pepi to bring us some Nip Cigars!!

Poor Arthur... He even looks cute when he's bored though! :-)
My CoT is about cats & computers!

Arthur is very very cute, he is a big brother showing Rosie how to be lazy but in charge, hahahah~!!!

Very cute slide show. Arthur, too bad you were bored. We're never bored - we have lots of toys to play with, and, of course, we have each other!

Ah, Arthur. Tucker knows how you feel. He is still in his younger years, wanting to play all the time. Punkin is the matron lady of the house and does not play often, she supervises!

Tucker will talk to me when he wants to play, which is really me throwing the mousies and him chasing them until they stop moving. Then the game starts again with a new mousie. Sigh...

Your home is so pretty. I really like your rug and the tall cat statue that shows in the pictures. Poor Arthur sometimes Darius gets bored and trys his best to get me to make things better. Sorry but I cannot stop the rains. I loved Rosie forcing him to take a bath. They are too cute.

PS- I keep forgetting to pick the reward up for Calista. She has just become a bear sleeping all the time.

This such a cool and clever idea! It was so funny to see the realistic captions. Arthur and Rosie rock!

That slide show was so funny! Love the pictures! I think I put the wrong link back to my blog. Today's COT is actually here

What a cute slide show! You're so creative, and I love your new Valentine Theme! How do you ever find time to paint and travel????

After all, Arthur is a King. No doubt, and Rosie? The Princess.

PS. My internet supplier does have serious problems this afternoon and evening. So I hope to post in between.
Tomorrow I'll be deconnected until at least 6 pm CET.

Poor Arthur. I am sorry he was so bored. The slide show of Rosie supervising his bath is very funny.

Cute cats! I bet you got tons of photos of that lovely cat. Happy WW!
Totally Worn Out
The Future Pianist