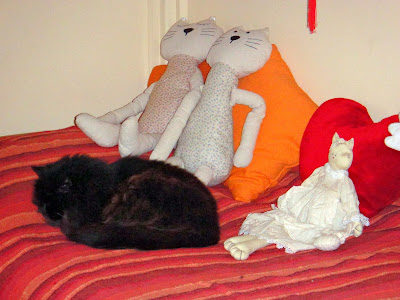 Kim apparently has chosen my bed as napping place,

while Pookie watches over Mr. G when he is on his computer 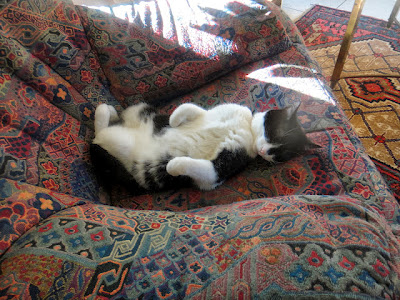 Rosie keeps him company while he watches TV 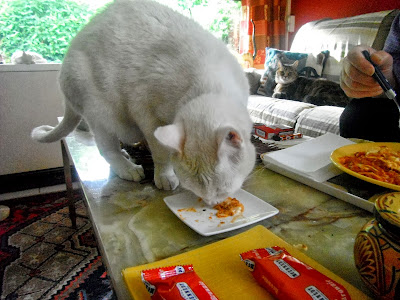 and Arthur of course terrorizes him for food ! 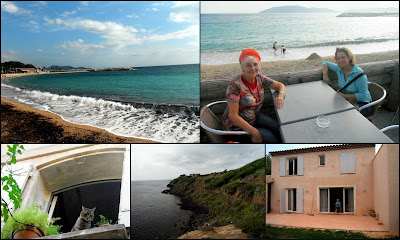 So everything is well. Today I leave this paradise and return home into the cold ! 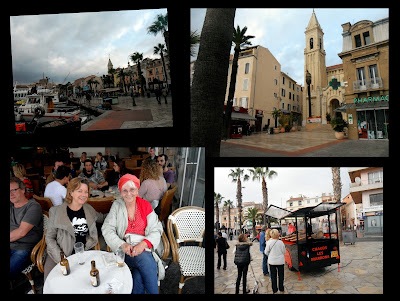 I am enjoying my holidays in the South of France since Sunday to escape the approaching winter, my cats are on holidays too with Mr. G. while I am sitting at the seafront enjoying the palm trees !

Fortunately Claudie has two cats too ! 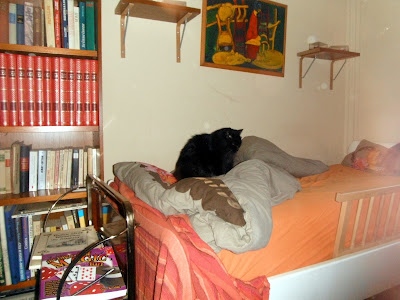 so does Kim, in his bed 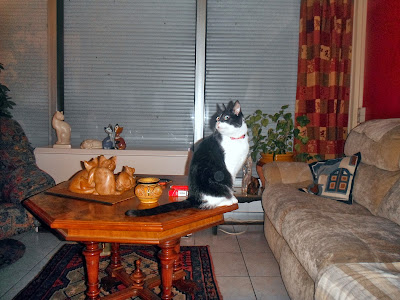 Rosie seems to see a ghost 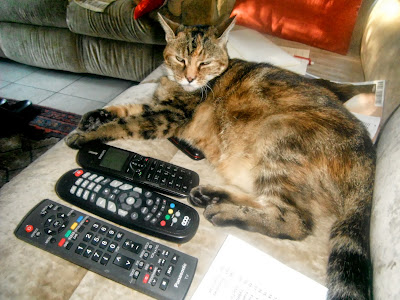 and Pookie watches over the remote controls.

Two days after the last "Cats on Tuesday" we still had summer, it was sunny and warm 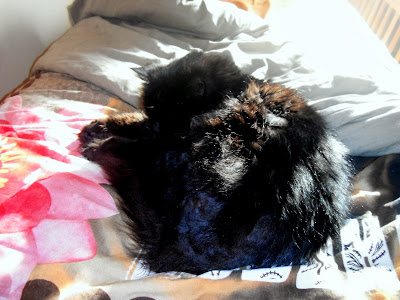 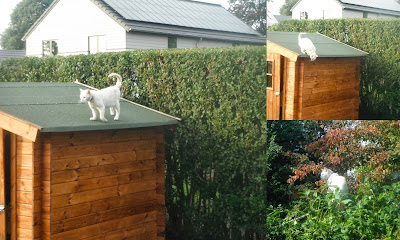 Arthur overlooked his kingdom on the garden shed in the sun

Or he waited for people who walked by so that they could admire him, or nagging dogs for which he jumps on the little wall besides the entrance, where they cannot reach him, and then he does his grooming. Dog owners are pulled on our gravel like if they were doing water ski.

And then from one day to the other autumn moved in with rain and winter temperatures. 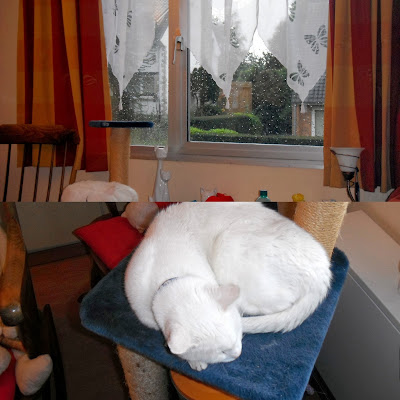 Arthur the philosopher adapted his lifestyle immediately. He slept the whole day near every radiator. 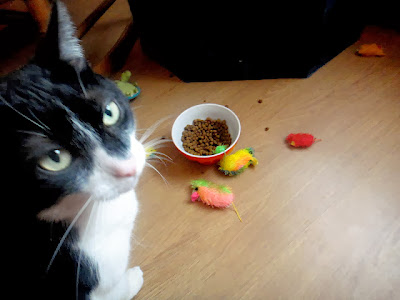 Rosie hadn't tidied up her mousies since a very long time. With the cold and rainy weather she rediscovered her housewife skills and started to put her mousies around the food bowls again. She probably had done a summer break. 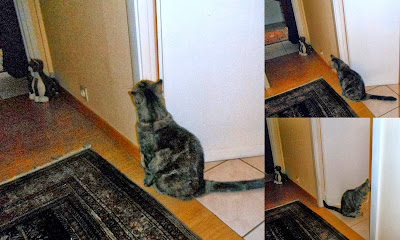 I had realized that our bathroom door frame was dirty on the bottom. Now I know why, Pookie when she waits for Mr. G. rubs her mouth against the door frame ! She does it against a little grey shelf too and I had to clean the dirty spots. Her back end doesn't get better and she can't jump anymore. With the help of her front leg claws she lifts herself on the bed, sofas and armchairs. As she doesn't seem to suffer at all, because she plays like a young cat and eats like a horse I am still hesitating to take her to the vet. But I will do so when I am back from my holidays at the French Riviera. I am leaving on Sunday.

Arthur was happy this weekend ! Our grandson Toby was on visit ! As soon as the car arrived he showed up from nowhere, rubbed his legs and Toby petted him. From there on he followed him everywhere. 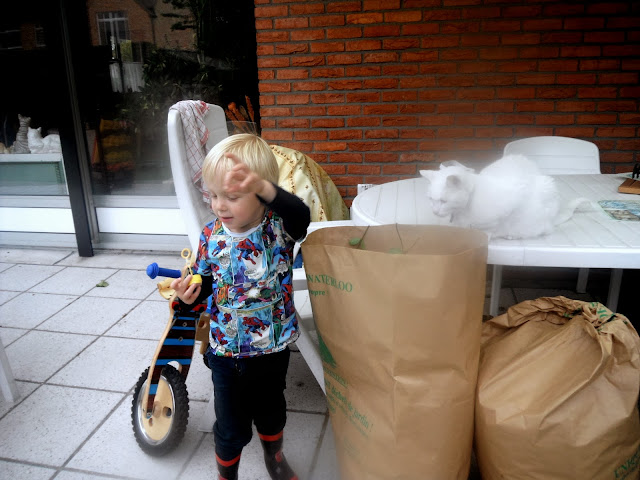 He watched Toby making soap bubbles and watched him biking. Even Toby's joyful screams didn't bother him at all. Unfortunately my camera wasn't working well so most of the pictures I had to delete. What a pity. 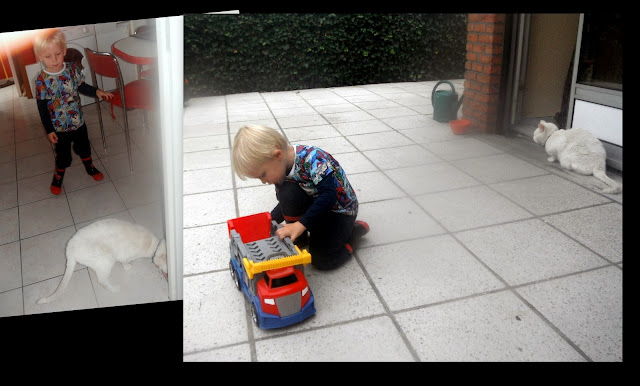 Arthur's appetite even increased with Toby's presence. He had a lot to do too, running and jumping around like a kitten !

The presence of a little human monster was not a joy at all for the others ! 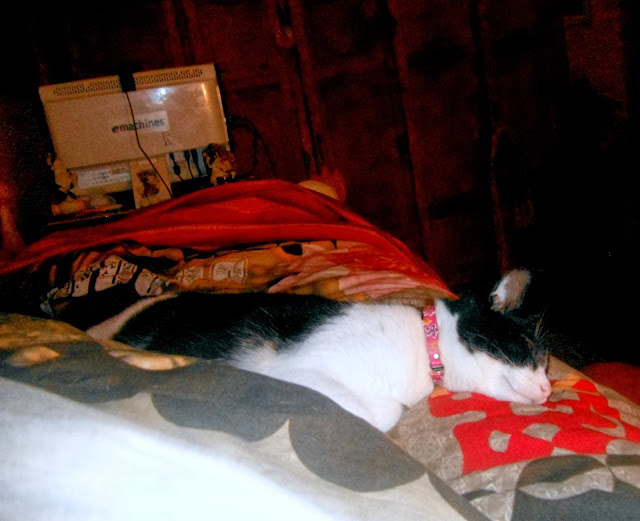 Rosie preferred to stay on my bed and only sneaked out when nobody was around.

Kim had disappeared and when  I finally saw her she was under Mr. G's bed 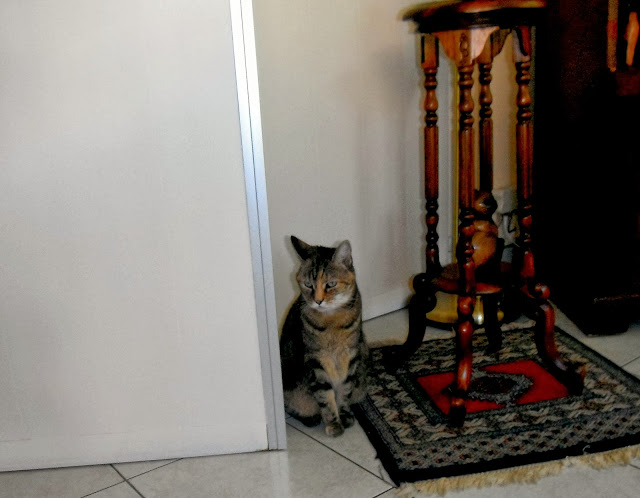 When the living room was empty and the little human monster had disappeared Pookie showed up to check if the house was "clean".

When finally on Sunday afternoon they left, and they all gathered in the kitchen, 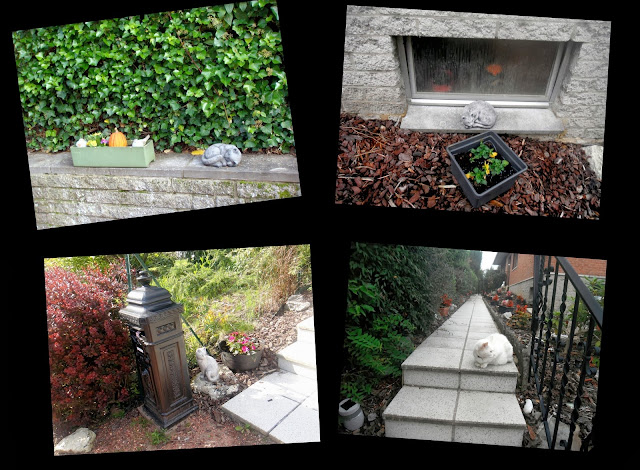 Arthur sat on the steps and did his Sunday afternoon job when the weather is nice. Lots of young parents with little children are walking in our street and our house became a big attraction ! I can hear the parents from my room trying to convince their kids to continue, but this takes time, there are so many cat sculptures at the entrance and a real white cat who doesn't move and with a big headed expression on his face let them pet him.

I should put a hat besides him .... one pet one euro ! We certainly would become rich !

The week started with a real torture for me ! I had to take Kim to the groomer and I was alone because Mr. G. had his surgery of a benign tumor just this day. 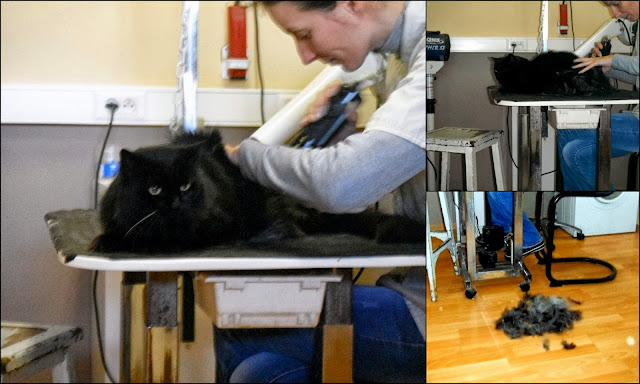 The whole morning until I had to put her in the carrier, she peacefully slept on a chair. But when I closed the living door, she already became suspicious, and hid behind the sofa. I closed all doors leaving only the steps free leading to the basement. With a broom I got her out behind the sofa, she ran into the kitchen and then to the basement, I quickly closed that door too. Now there was only me and the carrier. She sang like the Callas in her best days and I caught her and put her in the carrier and then in the car. I was exhausted ! The whole way long she sang, but once at the groomer she sat on the table, purred and made pasta, while I tried to recuperate ! What a hypocrite cat ! 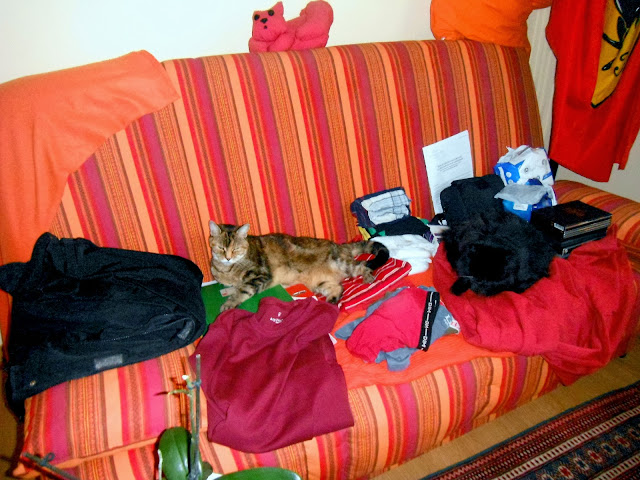 Before Mr. G went to hospital, Pookie took care of his belongings which he would take along, decorating them with her most beautiful hairs. Result, I had to replace the whole laundry. Mr. G. said it wasn't necessary, taking a few cat hairs to hospital is nothing. 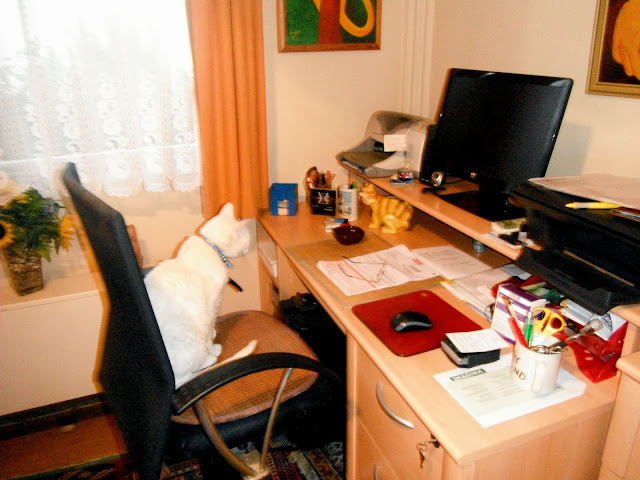 While he was away for 3 days Arthur replaced him at the computer.

3 worrying days later, I picked him up and he returned home in full shape, which wasn't my case at all ! I rather was a wreck ! 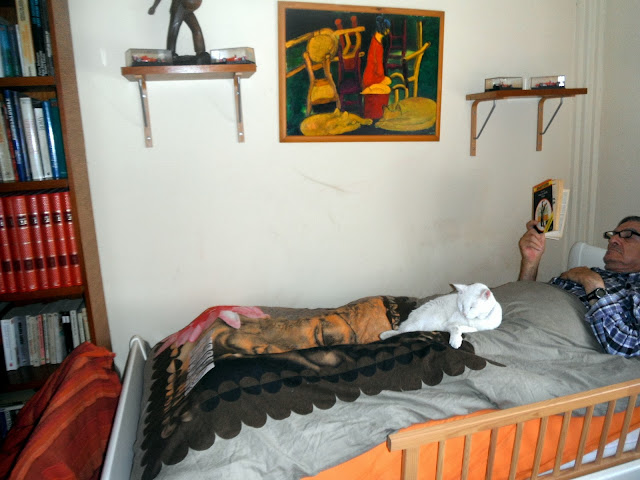 Now Arthur is his nurse and keeps him company. Kim too. 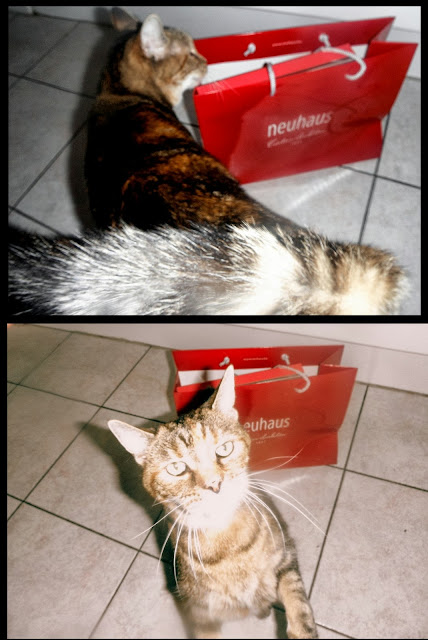 Pookie was quiet disappointed when a friend brought Belgian chocolate, they had no mouse or bird smell. 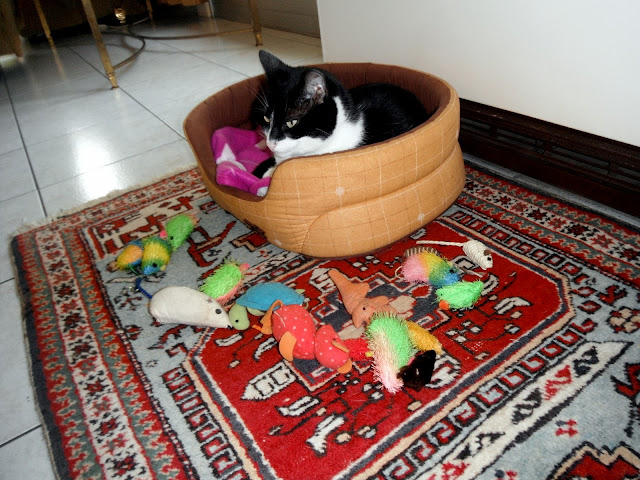 Rosie the housewife has got a new cover for her basket from my cleaning lady and therefore threw out all her toys ! Isn't she a poor orphan ? 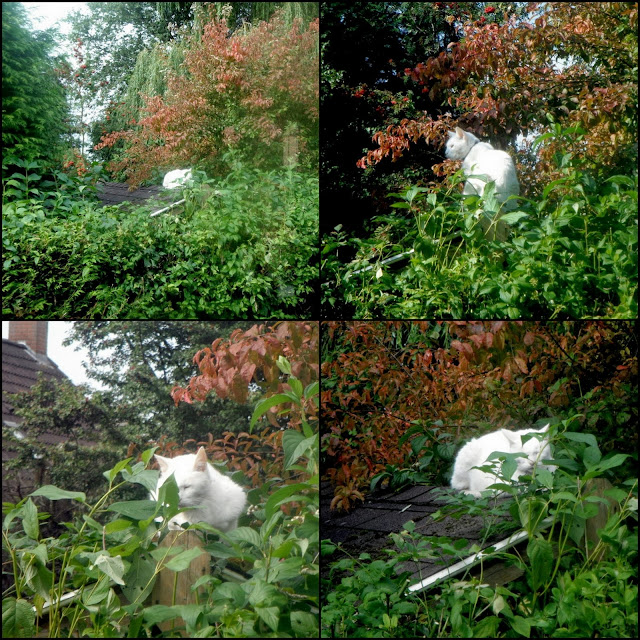 The weather is nice so Arthur tries out the garden sheds. First one neighbor 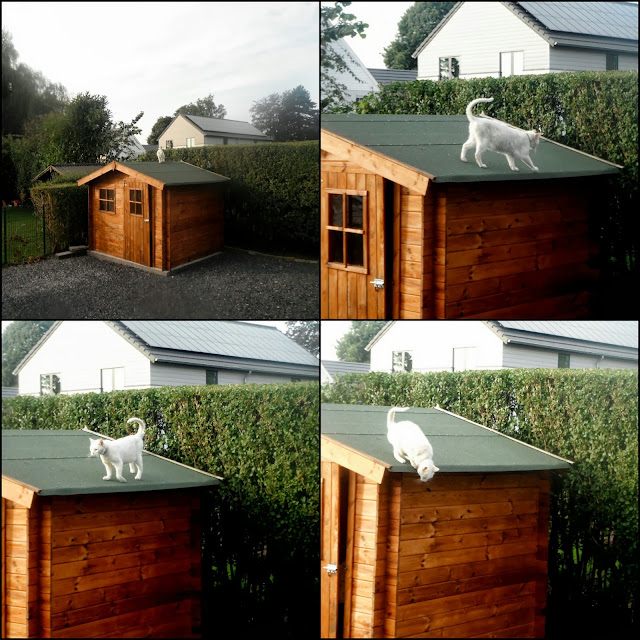 Then the other, my friend Dominique. I was there because we painted together and Arthur waited on the roof until I came out in the garden for a break. I almost got a heart attack when above me I suddenly heard his Hitchcock voice making "meeeoooooow". 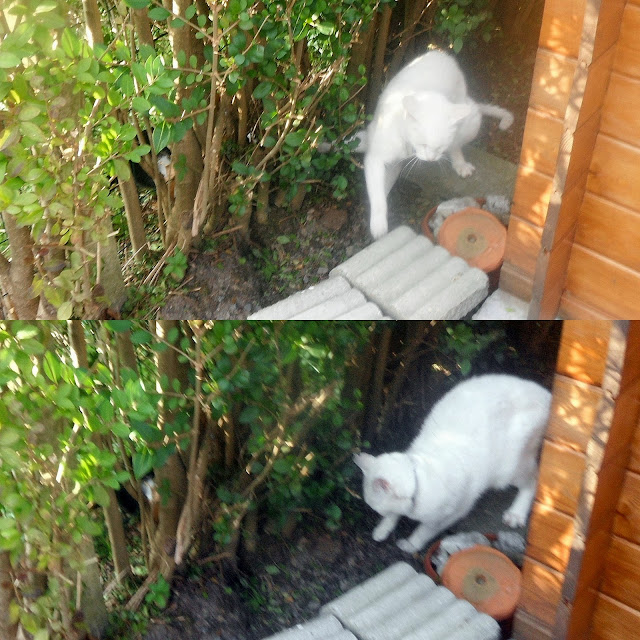 Rosie was on the other side of the hedge and they tried to play together, but it didn't work very well.