WHICH OUTFIT HAS YOUR CAT ?


As probably everybody knows there is a huge assortment of cat patterns. Here are only very few examples :

white, black and then the once who costs a lot of money and are "race".

At least the human has a lot of choice, as the once I have listed here are probably not even half of the existing patterns especially with the multi patterned and colored once.

The multi colored are all females, but I also have heard that sometimes mother nature makes an exception and a male comes out, but this happens not very often.

Here are my cats, which probably you already know and even with only four there is quite some choice. 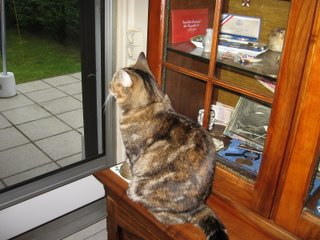 Arthur all in white

and Kim all in black

When I were in Amsterdam, I saw this cute cat sitting on a shoe stand on the market and watched people going by. Most of them stopped to pet the red and white cat. Who didn't bother at all.

And this is Sophie, white, black and grey (no red, again an invention of my camera) my girlfriends cat in England.

Cat colors and patterns are really international. All countries I have been visiting so far had all the same cats. The only once who were a little different were the egyptian cats as they had siamese looking heads and also were very long legged. But not as our spoiled and expensive siamese cats, the egyptian once you also could find near garbidge cans or even in them. But I have to say that the cats didn't look hungry at all and were mostly very well fed. There still must be a little trace from egyptian history where cats were considered as godess and even mommified. Now of course they have a lot of kitten but some of the egyptians start or had already to have them spayed. Which is a good thing.

The colors and patterns of a cat doesn't influence their characters. Each one of them is different, just like with us humans (sorry we have no patterns only colors). The only trouble is with white cats they are almost all deaf when they have blue eyes. Some humans too, when they have white hairs they sometimes need a hearing aid, which unfortunately doesn't exist for white cats

There are no preferences either when a cat man chooses his cat woman. He doesn't care at all about the outfit. In this human males are very different and difficult. Cats don't care about Mrs. cats age. An old cat is not only running behind a young girl cat, he takes everything to one condition : it has to be a female.

So if you want to be the proud owner of one or more cats, you have more choice in cats then in shoes.

Of course I only listed here the commun house cats and not all the breeds which also exists in many colors and pattern.

what color had dad cat ?

(I saw him in the neighborhood)

Pookie was born in September 98 we don't know the date, but as it is the middle of the month, we thought to celebrate this event this week-end ! Already 8 years old ! My Godness what the time is running ! She lives with now since 4 years.

Pookie isn't very keen on cakes, but a picture is OK
she of course preferes a mouse, although she takes care about bringing them in the house alive, as apparently she doesn't like its taste. To get rid of it is my husbands job.

Fireworks she doesn't like especially but doesn't care about them either. Baloons is another thing, that she likes to play with, but when suddenly they explode she is less happy. But flies !!! that's her big hobby ! Then she can run, jump and hop around for hours until she gets it and then ....she happyly sits down and eats it ! So I hope for her that there is a fly around for her today !

Little Pookie playing with a furry mouse toy. She was and is the first cat I saw in my life, apporting things. Little foils, paper balls, mice and other things, each time you throw it away, she runs picks it up and brings it back, laying it in front of your feet. She can do that for hours, until you don't feel your arm any more ! 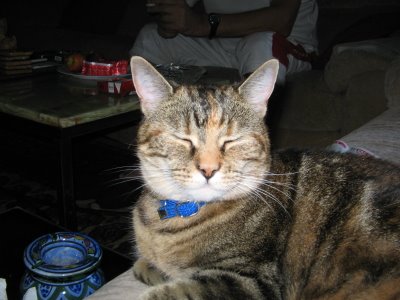 Pookie today, even if she looks so peacefully here on the picture, she is a real cat by all meanings ! She takes care of anybody and everything, governs the household with a soft strong paw and is of course very respected by the other once. Sometimes

Only old Lisa doesn't care, she likes to tease Pookie, squatting her favourite places and crossing her way on purpose, because then, Pookie gets upset and angry and hisses at her but old Lisa with a bored look uses to go where she intended to. 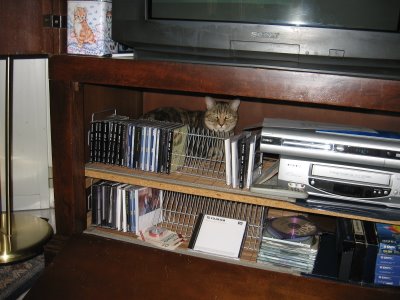 Pookie as a good housekeeper loves to sit behind the DVD player and therefore makes me happy as she takes the dust away while I have to do some gymnastic to get there. 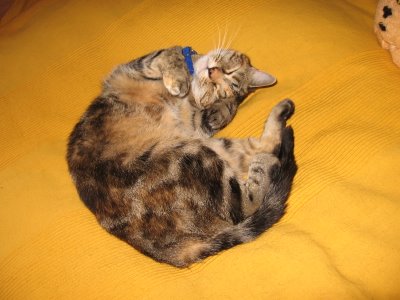 When Pookie is happy and usually she always is (besides when she mets Lisa) likes rolling around and stretching all 4 pawsin the air, but she doesn't like at all to be petted at her belly. 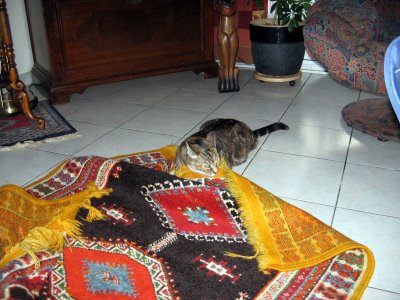 There is no carpet in the house when Pookie intends to play, which is not upside down. She runs around as if the devil were behind her, jumps on it pushes it away and hides underneath. When finally she has finished, we have to put all the carpets in the right places, which is good for us as we do not much sport. 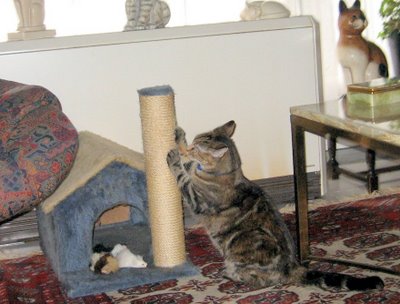 Pookie is the only one to use the scratch post, although that doesn't keep her away from from furniture, to keep her claws in good shape. As all women she wants to have pretty claws (in human cases that would be nails and usually at least I don't scratch at armchairs or use a scratchpost) 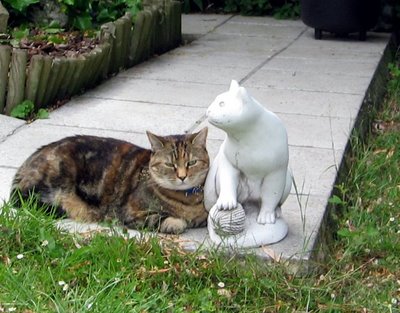 When I am in the garden, then Pookie goes out too. Otherwise she is more an indoor cat. But when the weather is nice then she goes out for mice hunting and had also brought us a little mole as a gift. Here she keeps company to another cat probably she hasn't noticed that it is a ceramic one, but the ball is very interesting.

When I have travel plans Pookie feels it and when I take my suitcase out she immediately jumps in it and doesn't like to go out anymore. She sleeps in it and I have to take her out to pack my things and then she gets angry and snarls like a dog.
But she has never ever scratched me on purpose.

Pookie's favourate place is of course my bed where she spents most of her time and she also loves the computer ! I have called her my personal cat (PC) as she never leaves me when I am at home. She is always scotched at my legs and accompagnies me everywhere in the house. And when I sit and write here on the computer she helps me by listening to my exclamations, swearings (yes even a well educated lady does) laughter and explanations with huge green eyes, understanding every word or sound, of course only when she is not sleeping. So I am lucky to have her as my confessioner and the good thing is she always agree to everything what I am saying. And it would really look ridiculous if I would speak to the walls.

As I don't want to repeat myself because I wrote already the whole life story of Pookie here in this blog I suggest to read it here http://gattinamycats.blogspot.com/2006/07/four-cats-of-gattina-funny-stories.htmlif you wish.