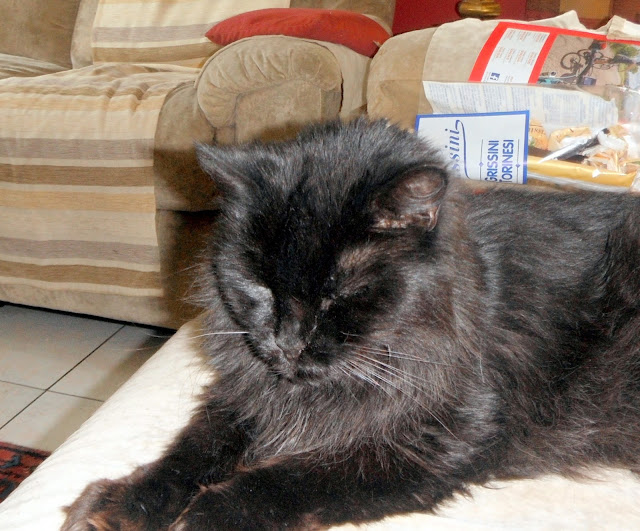 Meanwhile I learned to take this selfie photo session with philosophy ! 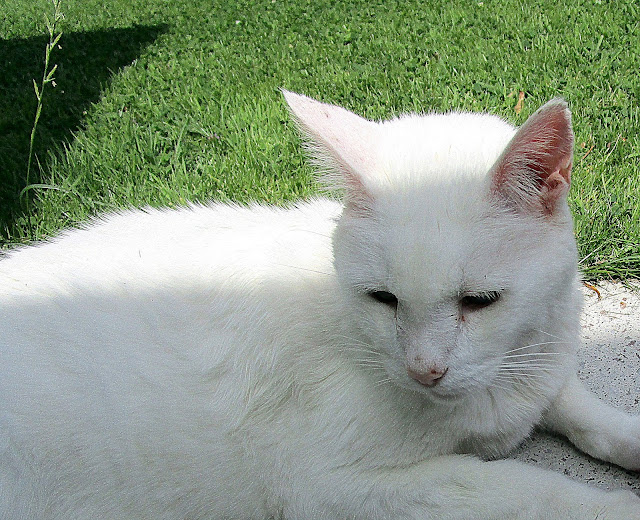 Sigh, fortunately I am in  a good mood,  I have to do these selfies again ! 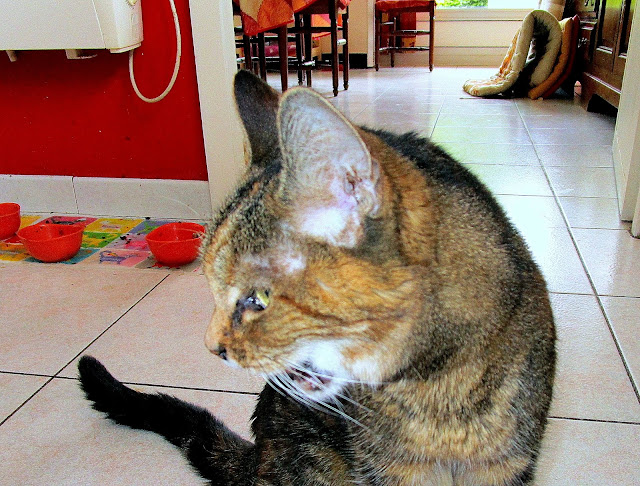 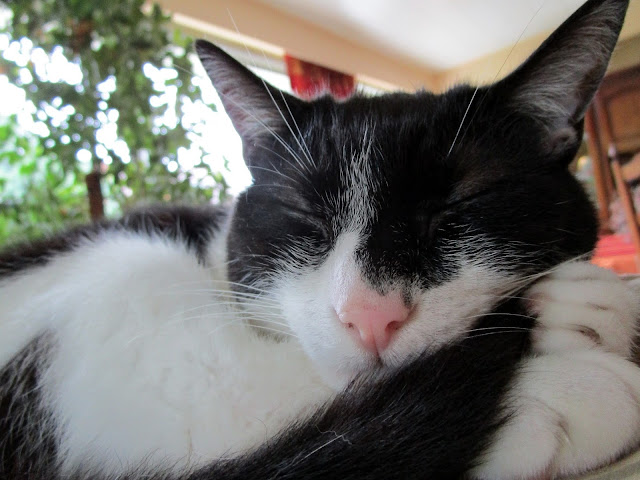 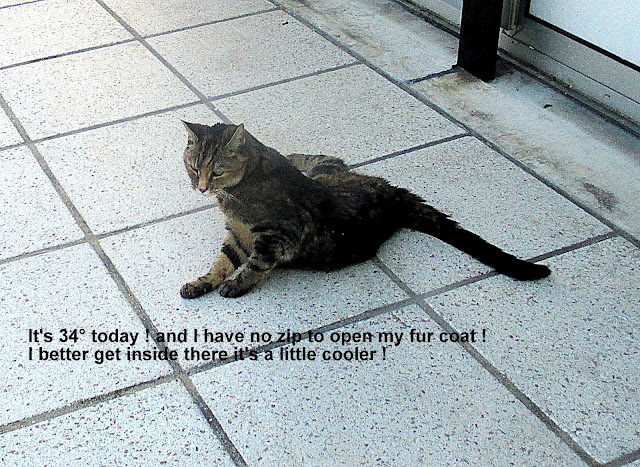 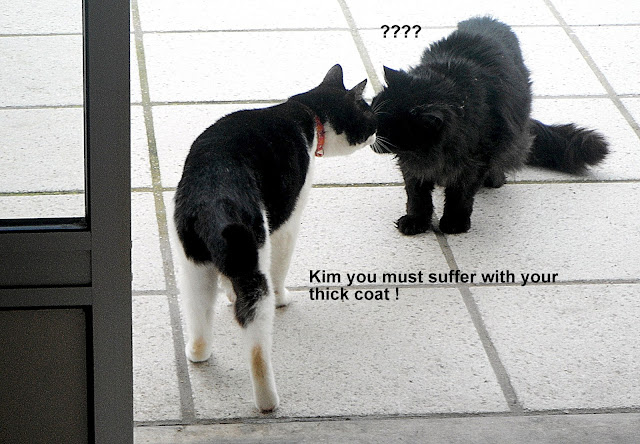 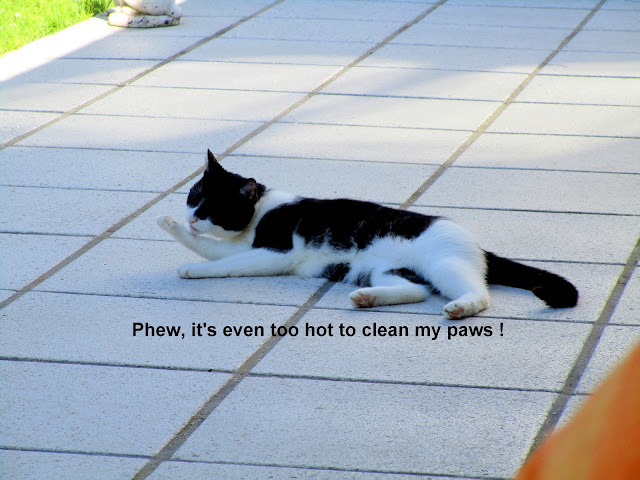 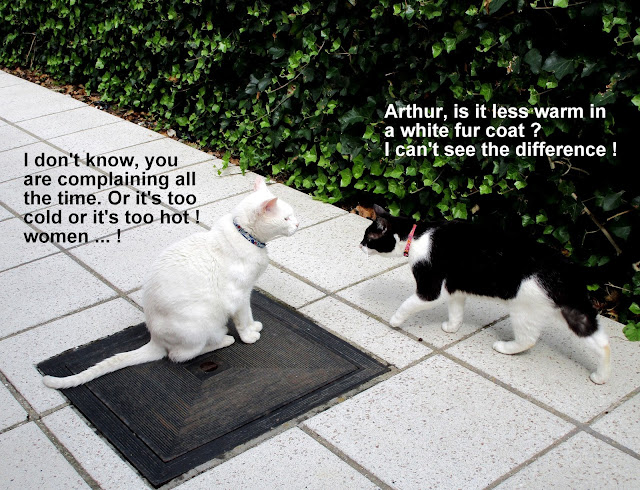 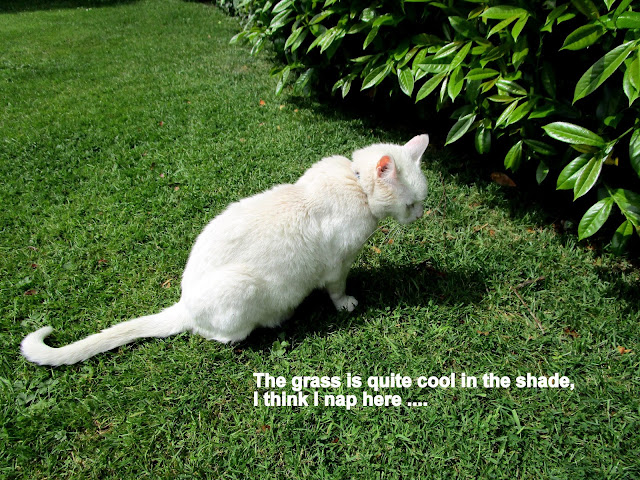 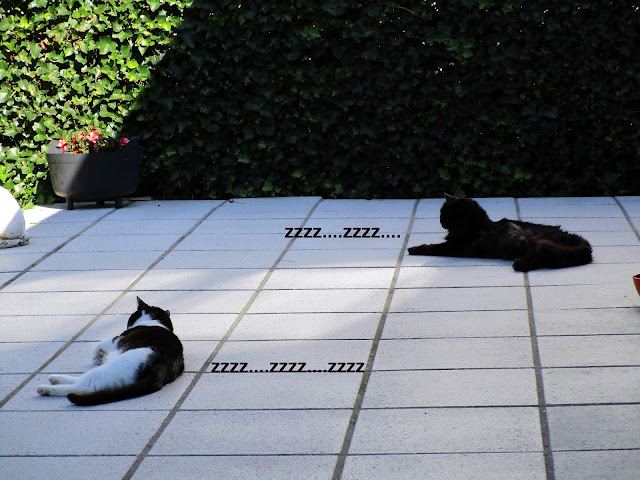 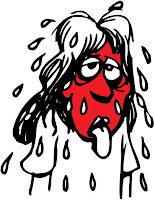 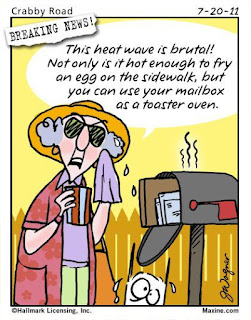 IT RAINS - ANOTHER LAZY SUNDAY

It's Sunday and it rains. I feel like in a dormitory ! 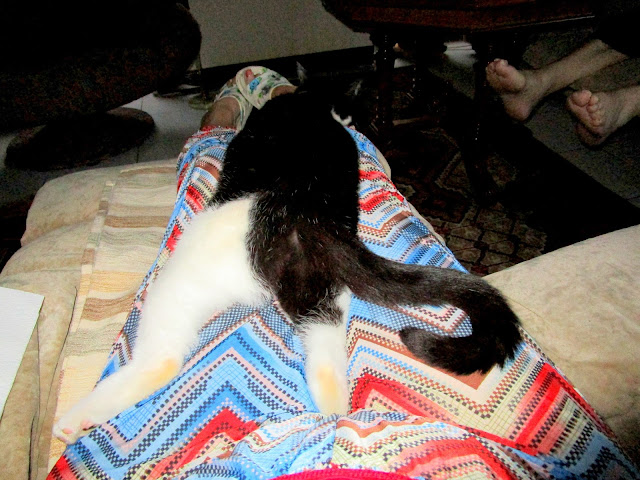 Rosie stretches herself out on my lap 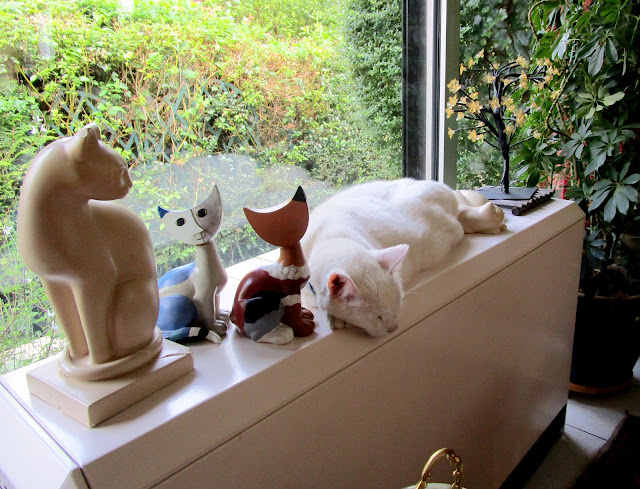 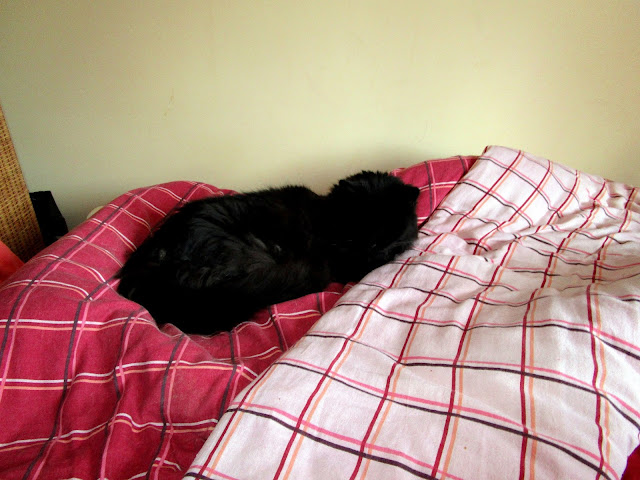 and from Kim I don't know if I took the picture of her back or of her front !

Have a better Sunday !

Yesterday evening I came back from my holidays in Scotland and England. It was nearly 10 pm, but dear Arthur showed up from nowhere to greet me ! He did everything possible to be in my way when I climbed up the steps ! 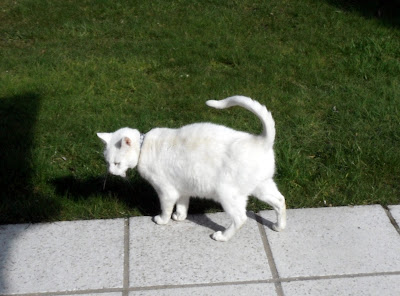 He tried to wear his tail straight up, but since he had been bitten in his tail and nearly lost it, it always hangs half over his back.

From the others no one showed up. 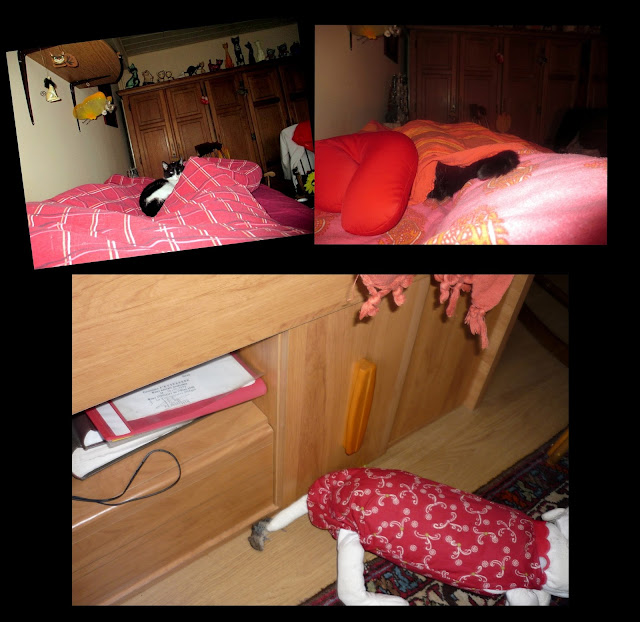 But during the night, somebody washed my nose ! It was Rosie to show me that she was happy I was sharing the bed with her again. From the nose she tried to wash the rest of my face, and was a little offended that I pushed her away.

The next morning I  also noticed when I made my bed, that she  had brought me a gift ! A mouse was laying at the bottom of my bed ! Fortunately she hadn't brought it up and put it on my chest ! 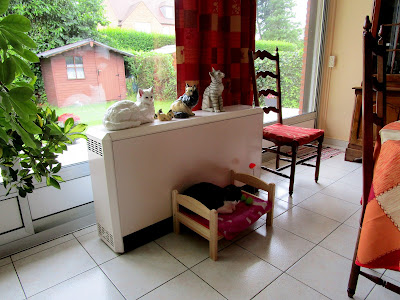 Now she sleeps in the other little bed which is in the living room. 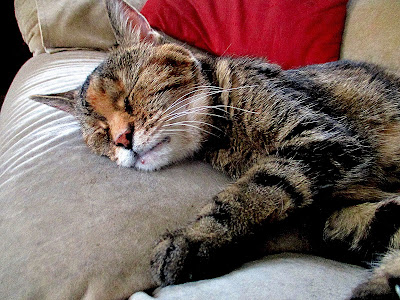 As Pookie is deaf, she didn't hear me coming and continued to sleep 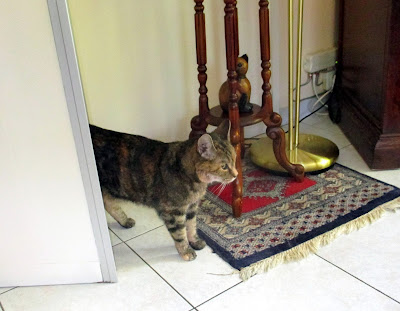 I only saw her in the morning and she was also happy to see me. 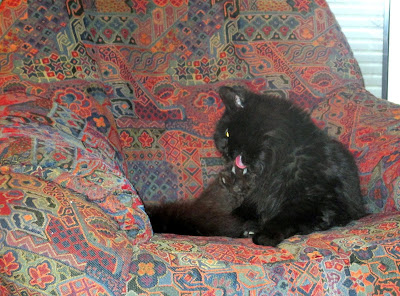 Kim of course hadn't probably even noticed that I had been away for nearly two weeks, because she sat there were she always sits and washed her fur. I didn't even get a welcome glance.

I am still half on holidays and nearly forgot to clean their litter boxes, what a shame !
Posted by Gattina at 10:36 AM 4 comments:

On Friday morning when I woke up Mr. G. told me that Pookie had disappeared. He had looked in the whole house but couldn't find her. This was very unusual as Pookie since she is deaf doesn't go out anymore and with her 18 years she is rather careful. We checked again everywhere, even in the closets, but no Pookie. I feared the worst.

Then suddenly Mr. G. found her laying on the bark in front of the kitchen door. She lay on the side and didn't move. He touched her thinking she was dead, but she got up and walked like a drunken sailor into the kitchen and then hid behind the sofa. Her hind legs seemed to have no strength anymore. I called the vet and asked her to come it was 9 am. I even forgot to tell my name and address, but she had recognized me and came half an hour later.

And what happened ? Pookie appeared from behind the sofa, walked nearly normally and went to her food bowl where she started to eat ! She had resurrected ! I was ashamed that I had bothered the lady for nothing, but I couldn't know. She told me that I had well done, because she would have put her to sleep forever, because we didn't want Pookie to suffer and bother her with treatments at her age.

The vet did a check up, told us that she is still in good health, of course she has kidney problems, but for her age she is normal. The fact that she had lost balance and meows the whole morning are all signs of an old cat, just like old humans who also get strange with the age. We were so relieved ! I almost cried ! 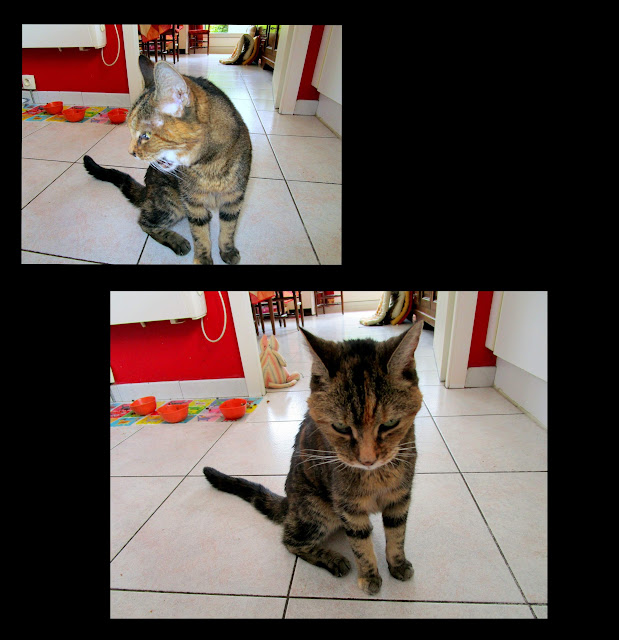 And here is Pookie after her check up, and probably wondered why we observed her the whole day.
At least a happy end for a while. 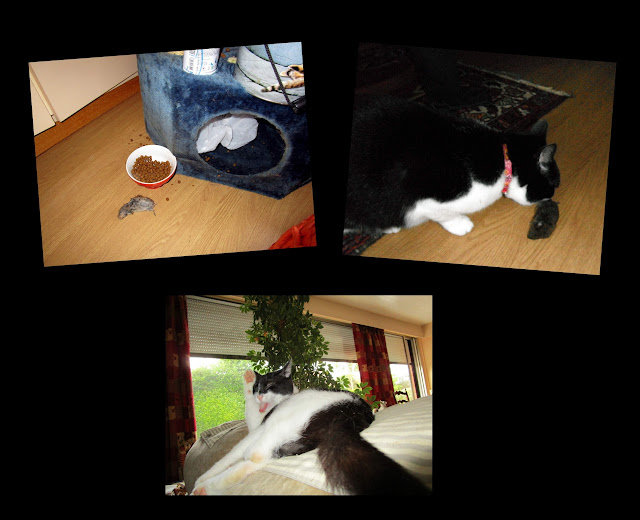 Rosie in full shape, brought two mice in my room, I walked on one in the dark when I went to the bathroom, but didn't realize what it was, only the next morning, I was disgusted and the second one I found later besides her food bowl. Can't she keep her prays outside instead of bringing them in my room to show me what a good cat she is ?? 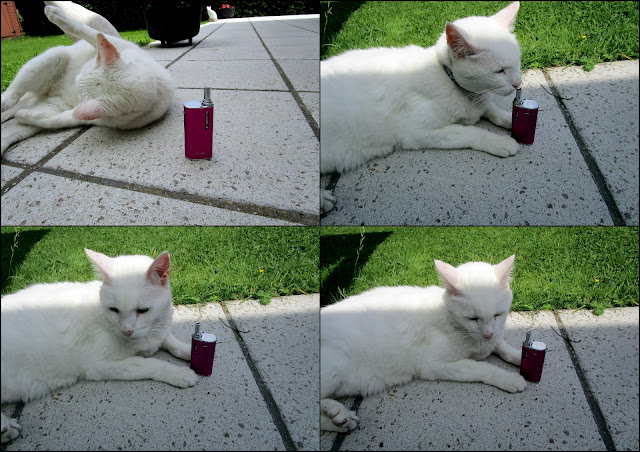 Mr. G. had bought himself an electronic cigarette. Arthur smelled on it and then rolled around. He is not yet addicted, and Mr. G. smokes only 3 cigarettes now and wants to stop. Apparently it helps.

Today I am packing my suitcase, because tomorrow I am off to Eastbourne in England for 12 days, as I do each year. So Mr. G. can spoil his cats to his heart's content !

From Kim there is nothing special to report except that now, after 12 years she lives with us, sits now on Mr. G's lap and he is even allowed to comb her ! Miracles happen. When she sees me she runs away ! and it's mostly me who feed her !