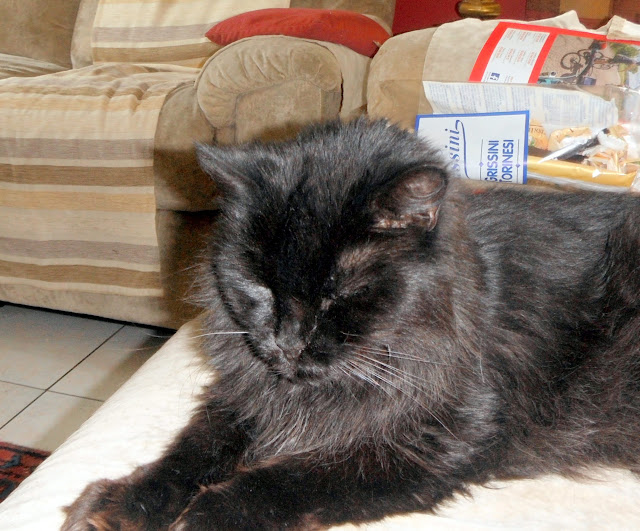 I forgot to keep my eyes open ! 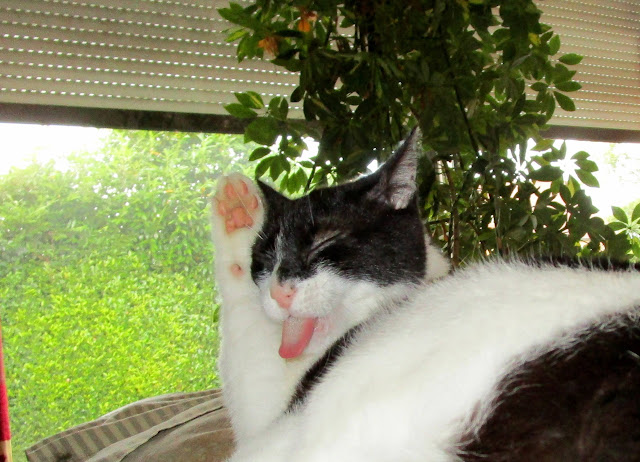 That's what I think of your selfies ! 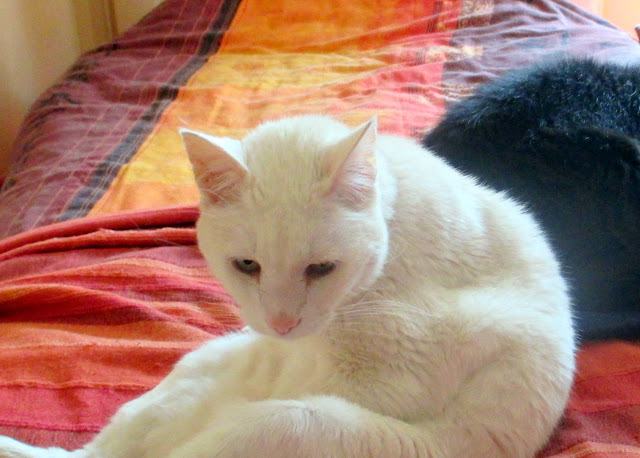 Wow, I look much younger ! 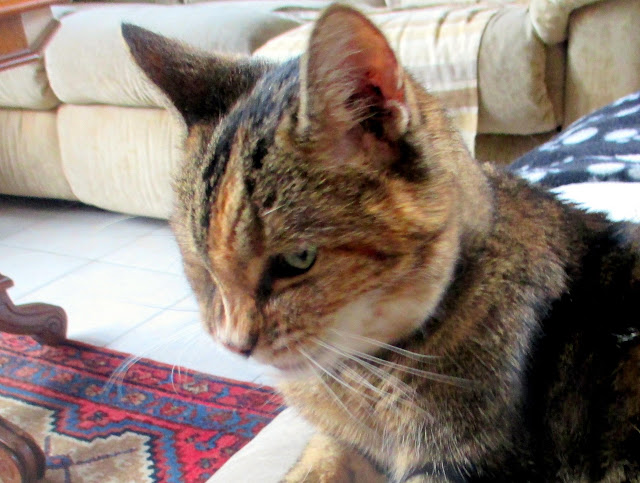 Where was the lens again ?

Twice this week when I got up I stepped with my naked foot in cat vomit. I don't know who it was but as a wake up I didn't appreciate at all, especially because I had to scamper like a rapid on one foot to the bathroom to clean my foot !

Besides that I had to pick up twice a bloody mouse corpse, one in my room and one in the bathroom. This is the joy of having cats.

It had been very hot during the weekend, and wherever I looked I saw this scene ... 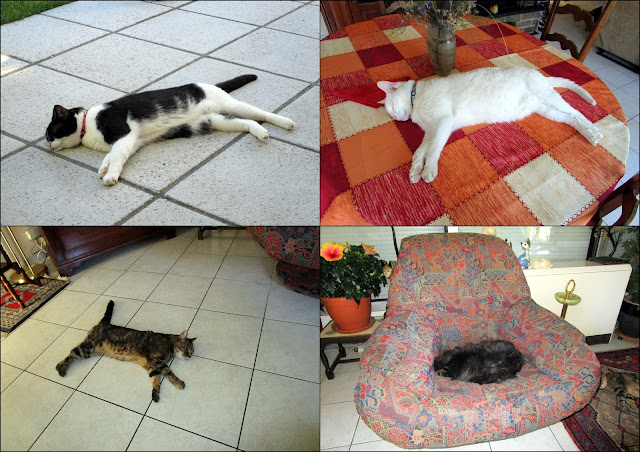 Except Kim who slept on the warm armchair the others stretched out on the cool tiles. 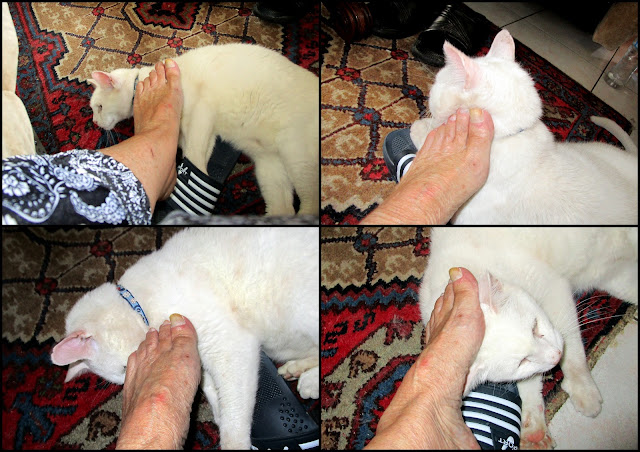 Through Facebook (for once it was useful) I had found a pedicure. She did such a nice job that I wanted to thank her and asked Arthur to be my background, because my foot alone wouldn't have looked nice. He was sleepy so I could do what I wanted. 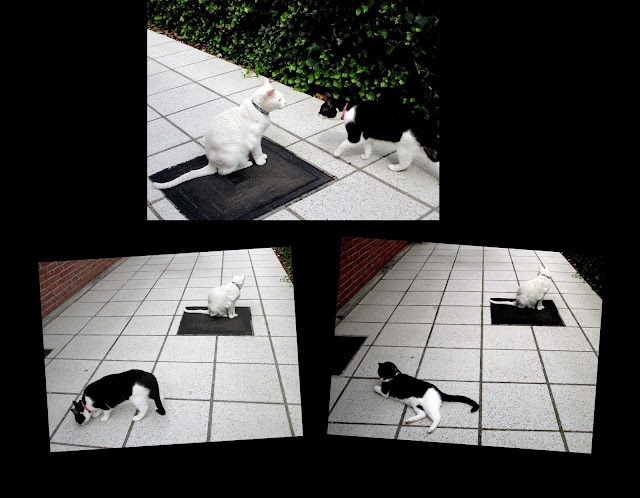 It cooled down and they are all out, laying on the terrace or discussing who sleeps on the warm bark 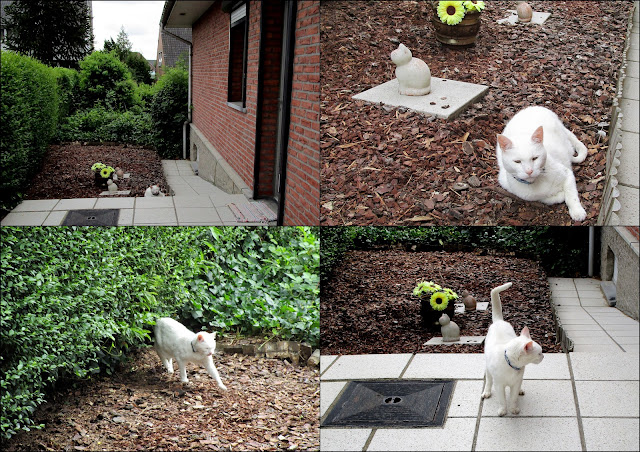 Arthur won and spent the whole day there, just interrupting for meals.

Pookie stays inside and slept on the garden cushions, she only goes on the terrace when I am there. Now she needs a body guard because she doesn't hear anything anymore.

So the week went by without major happenings.
Posted by Gattina at 5:03 PM 6 comments: 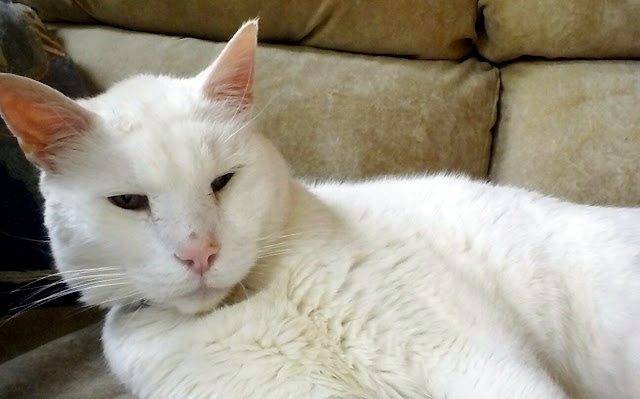 I just had breakfast ! 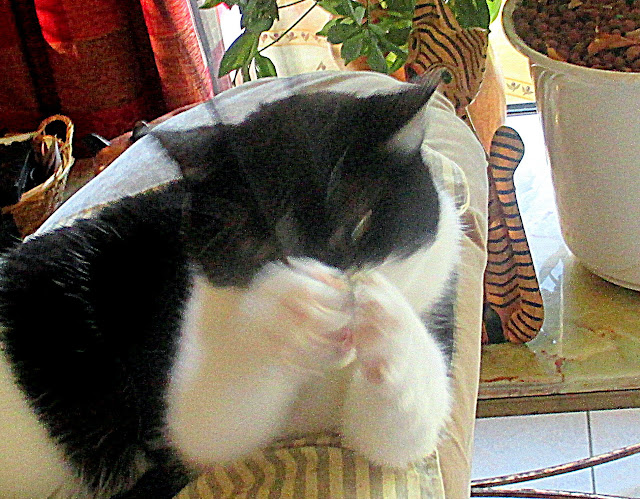 Nooooooo, I am not looking good today !

Not so bad for once 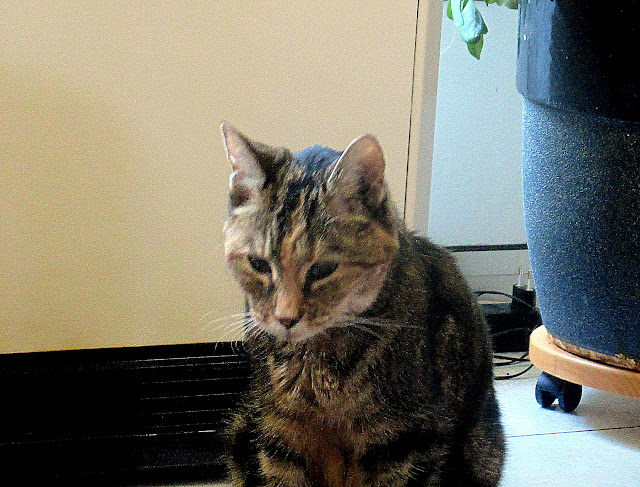 Did it work or not ? 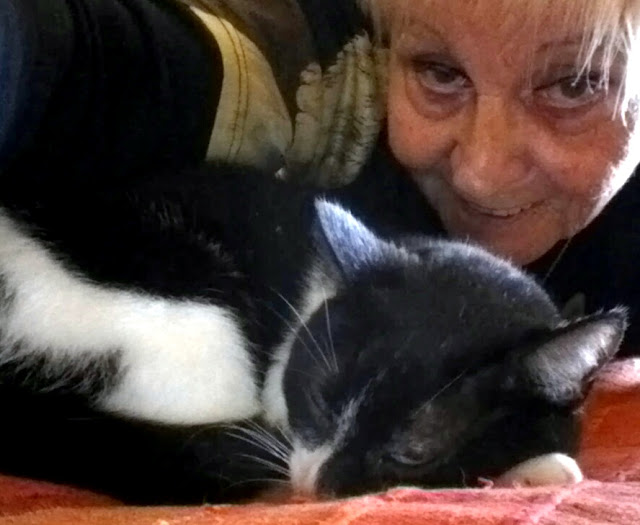 I am exhausted from mouse hunting, that she had to help me ! 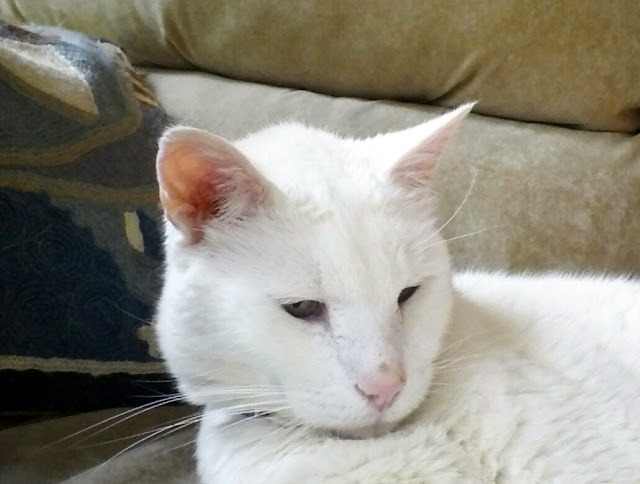 Sorry I just woke up

It's not a good photo, but I am too lazy to do another one !

Ever since Rosie has seen that I comb Pookie, she has changed her mind and wants to be combed too ! 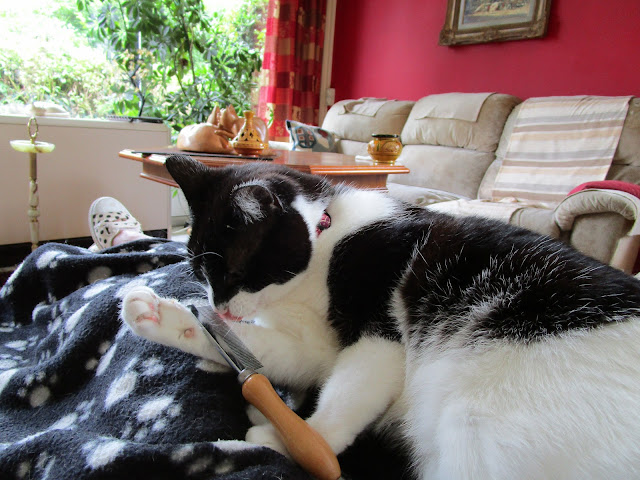 She took a good sniff when we were finished and seemed to be quite happy with the result ! 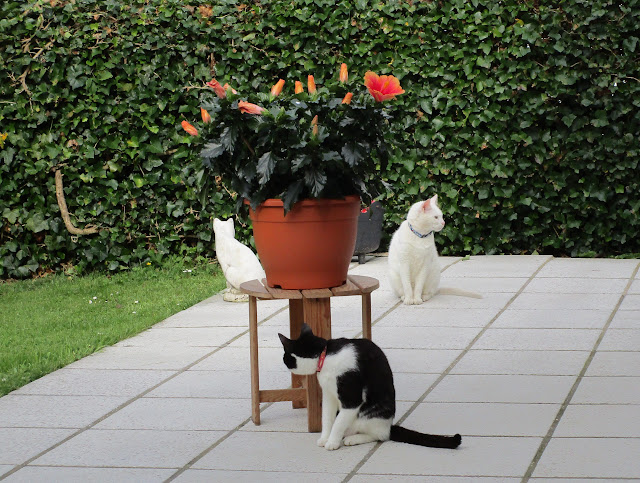 I have got a beautiful Hibiscus plant from my neighbor, which Arthur and Rosie had to admire. As it didn't smell at all, they quickly lost all interest.

This weekend Arthur was happy ! The house was full of visitors, not only my friend from France but also my son and of course Toby ! 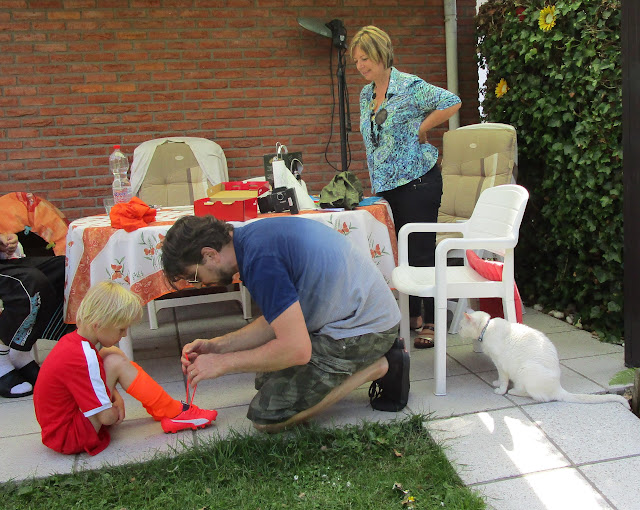 During their whole stay Arthur was with Toby. Here he watches when Toby put on his football (soccer) costume, under Arthur"s watchful eyes. When afterwards he played with the ball, he looked from far, the ball was a little too big ! 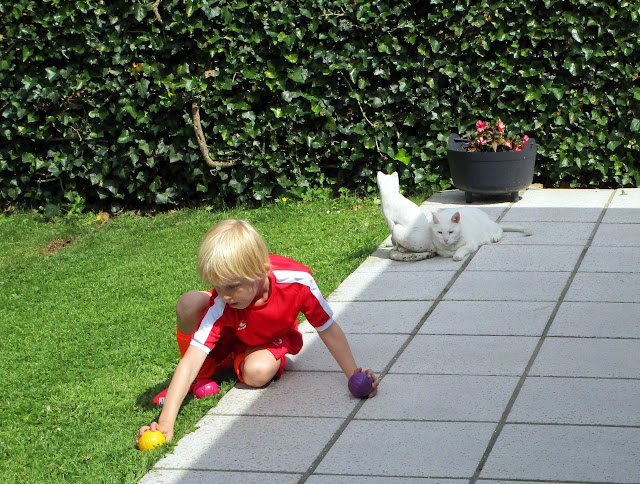 He was really happy that the house was everything else but quiet as it is usually. Arthur loves company.

When they had all gone, he fell in his sleeping marathon again.
Posted by Gattina at 12:05 PM 6 comments:

Summer still hasn't moved in and my cats continue their winter/summer sleeping marathon. And when they wake up from time to time, they observe us to see what we are doing ! 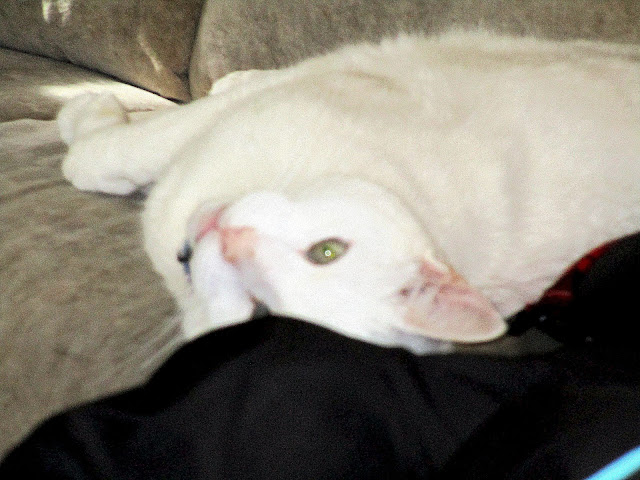 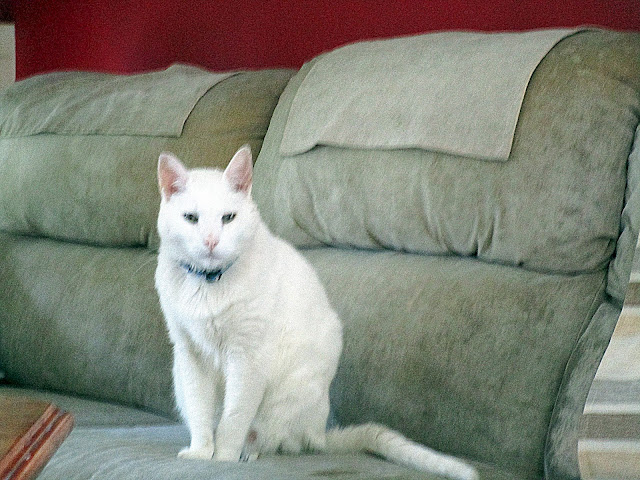 A noise in the kitchen had woken him up, now he hesitates if he should check if there is something to steal eat ! 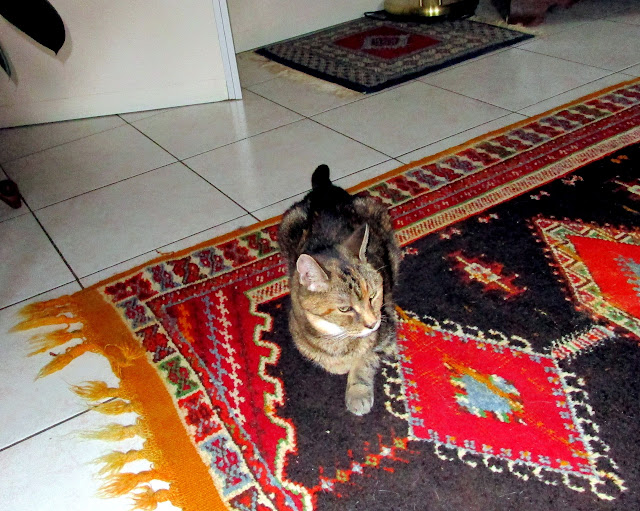 Pookie keeps an eye on us and if I or Mr. G. get up she starts to meow and shows the way into the kitchen, even if she had just eaten. It must be an old woman quirk ! 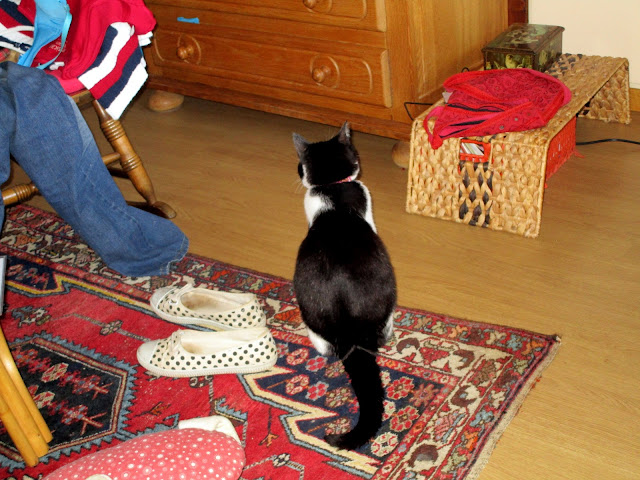 after breakfast and a little walk around the house, she settles down on the top of the sofa and observes what is going on. 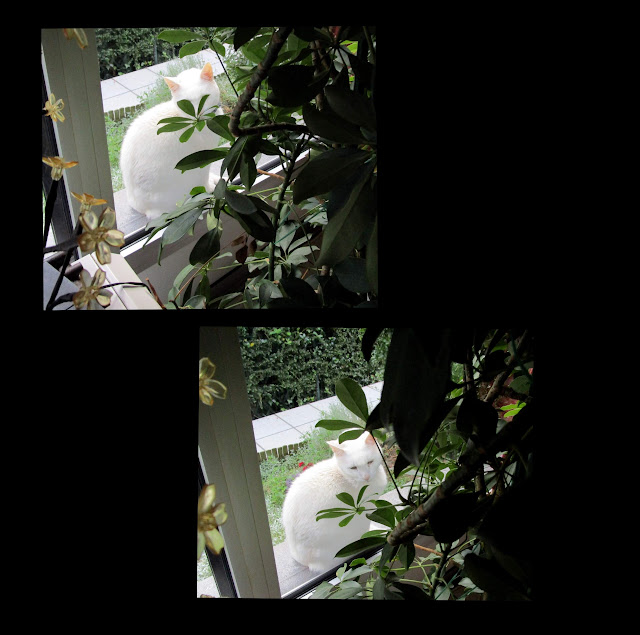 Usually the sun comes out when it's bed time. Arthur is our stalker, he sits outside and looks inside and we have to pay attention when we close the stores !

The clean fresh water in the kitchen is ignored by Kim, she prefers the old water in a bowl standing on the terrace !

So another week went by, without any special happenings, except that Rosie had barfed on my bed and I had put my leg in it !
Posted by Gattina at 8:58 AM 6 comments:

I look like on a passport photo, you are not allowed to smile ! 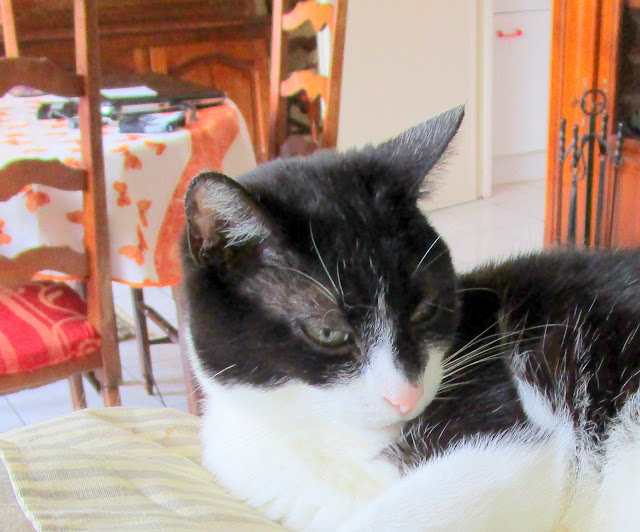 I am in a bad mood today, and she bothers me with her selfies !

Sorry, I got too close, I didn't want to show you my old woman wart ! 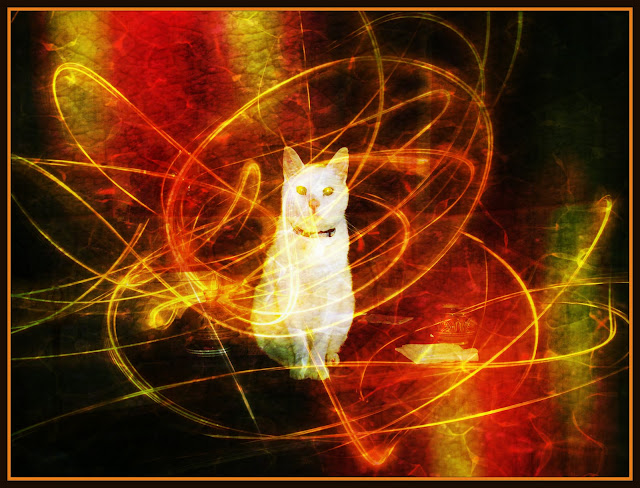 more participants at here
Posted by Gattina at 6:30 AM 13 comments: