Yesterday evening, Mr. Gattino took Arthur to the vet. When they arrived, Arthur was still in good shape, but Mr. Gattino near a nervous breakdown. During the whole trip Arthur did sing with full heart and a Callas was just nothing against him.

He immediately recognized the vet, a very nice lady and got out of his cage. He said nothing when she examined him and even when she gave him a shot he looked around with interest at all the strange instruments.

The diagnosis was not bad. Apparently Arthur had cut himself probably at a barbwire and had licked the wound all around. She also said that his strange behaviour is probably due to the four days of his adventure trip, where he probably got very afraid and stressed. (as many of you believed too) We will never know what had happened to him, but I am convinced that he were "kidnapped" and locked in by probably a child who wanted to keep such a beautiful white cat. Otherwise I can't find any other explication. Everybody knows him here around and nobody would "steel" a cat, especially him as he is the only white cat in a milewide area.

On the way back, Mr. Gattino had opened the cage, because he couldn't endure Arthur's soprano voice anymore. Arthur was very happy about that, sat down on the seat behind and looked happily out of the window. He didn't open his mouth at all. But the poor drivers in the other cars, made almost an accident, looking at a white cat in a car ! Arthur proud, savoured this instant, but didn't wave with his paw. (I suspect Mr. Gattino felt proud to as Arthurs chauffeur !) 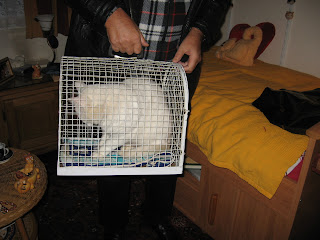 Here you can see the wound 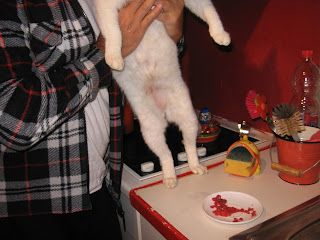 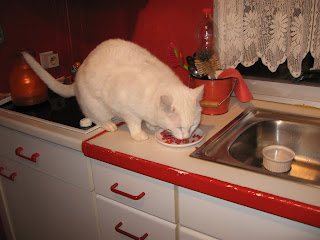 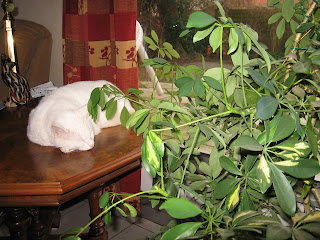 After all these emotions and finally home, he got his favourite plate : minced meat !

Then he settled down in the living room and took a little nap besides the window.

And we were very relieved ! Now Arthur has to take one pill a day, but with him there is no problem, we have just to put it in a little ball of minced meat.

We start to be worried about Arthur, since he disappeared for four days beginning January, he still doesn't go out which is really quite unusual. Our neighbours start to ask if something has happened to him.

He only would put a paw outside if one of us is with him. Mr. Gattino once went to our neighbor across the street and Arthur followed him and sat down to listen to the conversation. Then he profited from the occasion to be outside and did his little business. But as soon as Mr. Gattino returned home, Arthur did it too. He only goes into the garden when I stand at the window door, otherwise he would sit there and look outside.

It seems to me as if he is very scared about something. But about what ? Since he is with us he had never behaved that way. He is always around me between my legs or sitting on my feet, as if he looks for protection.

Yesterday when Mr. Gattino lifted him up, we suddenly saw that under his belly there is no fur anymore ! It's all pink skin ! And we had never noticed it because he doesn't scratch himself unnormally, he eats well and is not behaving like a sick cat, he even runs behind Pookie to play with her. Usually we don't lift him up very often because he doesn't like it. 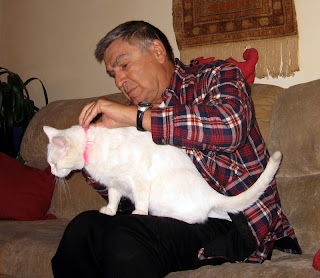 When Mr. Gattino took Arthur's collar away and had lifted him to his knees, he saw Arthur's pink belly.

Arthur apparently wanted to keep it ! 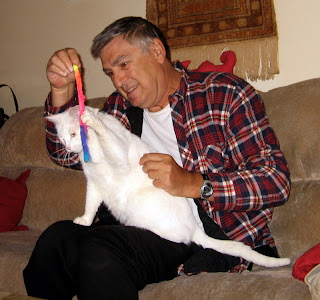 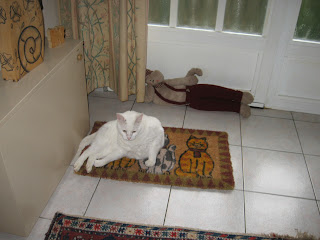 These are his favourite nap places, the mat at the front door. 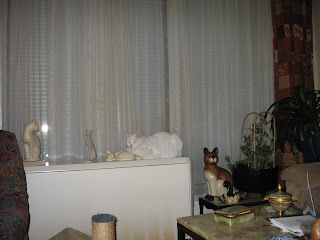 Or on the heating 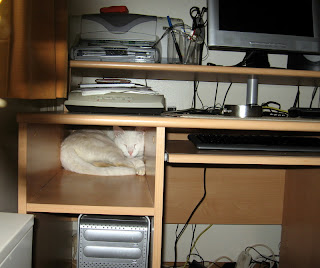 He also hides in the house and we have to look for him. 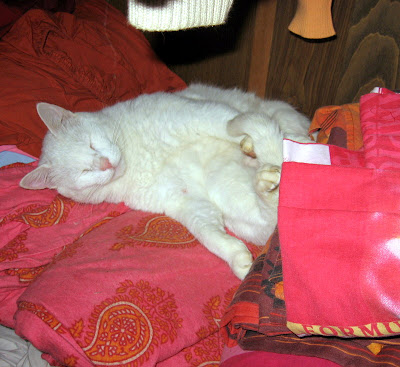 But still, his favourite place is my wardrobe, where he feels safe. In there he spends most of his time.

This evening we will go to the vet to see what had happend to his belly, I thought that maybe he has an allergy ?

Tonight we will know

My cats were all raised from aristocats to aristocrates. Please note that from now on you have to great them with the following titles

His Most Noble Lord Arthur the Saturnine of Buzzing St Helens 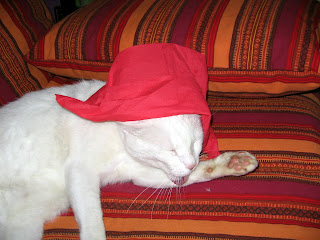 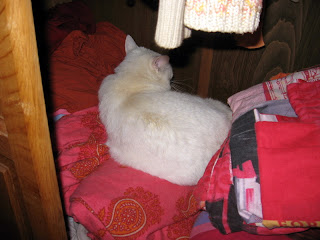 But he still sleeps in my wardrobe and apparently hasn't even washed his back. Probably he is waiting for his personal Buttler. 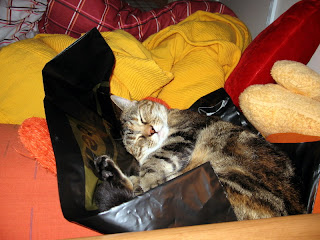 Now that she is an empress, she prefers sleeping on a garbidge bag. Noblesse oblige ! 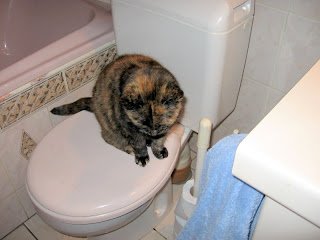 has finally earned her thrown 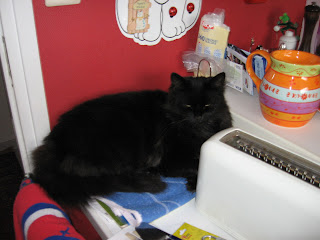 waits now for her 4 oh' Clock Tea and Toast.

And I ? Probably have to serve them more now !

Mr. Gattino had a strong cold, due to Arthur probably, who had him go out in the cold and rain to look for him while he (Mr. Arthur) was lying peacefully in my wardrobe and slept ! Neither of us had seen him disappearing. 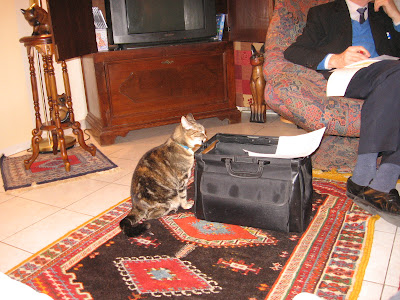 The doctor whom we know since 32 years came as usual with his bag full of strange things and Pookie had to put her nose in it to sniffle if there were no hidden treats in there. 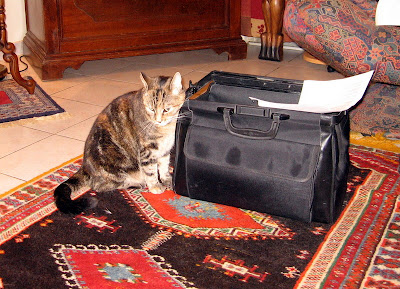 As she found nothing special she stroked around the bag and ... 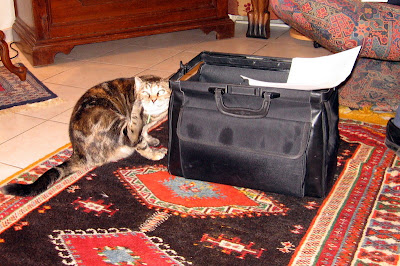 when cats don't know what to do they scratch themselves behind an ear (just like humans) to think it over.

I nearly hadn't the time to shout "NO" and order her NOT to climb in, because that's what she intended to do.


She looked at me reproachfully and went away, very offended. I had spoiled her last investigations. 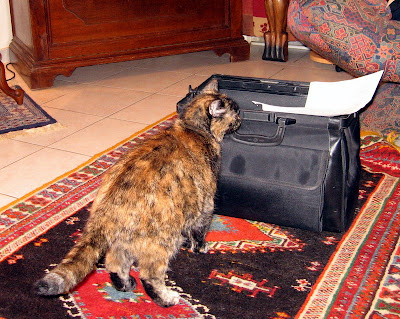 As soon as Pookie had left the room, Lisa showed up. She of course had to look in their too. But she didn't like it and prefered to jump on our doctor's knees. There she settled down and listend full of attention to the diagnostic.

Nothing special, just a few pills, stay warm, and in a few days he would be fine. 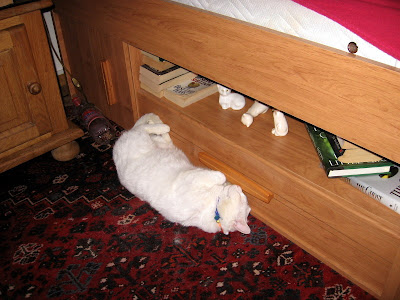 The only one who didn't hear anything of these events, slept deep and peacefully besides my bed (and not on, why ?) which made our Doctor ask "Where is Arthur ?" because they are big friends and usually Arthur greats him like a long lost friend.

But Arthur is still in his hibernation.

As so many people wonder why our doctor makes home visits, I will explain : He still is the Doctor of the "old school" although he is the same age as me (63) . He loves his patients and likes to come to their houses. He is not married and his job is his hobby. Usually a doctor only comes to your home when you are half dead with one leg in your coffin.

WHERE IS ARTHUR AGAIN ?

Again I thought ! It was 7 pm and no Arthur in view. Last time we had seen him was in the morning and there he slept in front of my bed. The weather outside was terrible, it rained cats and dogs (maybe Arthur wanted to join them) and a strong wind blow. Mr. Gattino went on the terrace and shouted in his opera voice "Arthuuuuur" but nothing. I looked in all rooms and in the basement, no Arthur. After his last adventure he didn't go out anymore or just for 10 min and now that ! Mr. Gattino put his shoes on and disappeared on the street. As I couldn't do anything but waiting I sat down and read some posts.

Suddenly I heard a strange noise, I listened, no noise. I continued to read, again this noise. It seemed to me it came from behind me. I turned my head but there is only my wardrobe and the door was closed.

Intrigued I opened the door and what did I see ? This here : 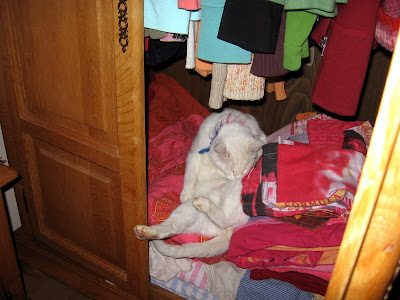 Mr. Arthur in all his beauty sitting in my wardrobe and washing ! Relieved I took this picture ! Apparently he had slept there the whole afternoon. He had opened the door slipped inside and the door had closed for itself.

Mr. Gattino fears now for his life with all these excitements !

Arthur couldn't understand our behaviour. He made his big eyes and collapsed to another deep nap.

ARTHUR IN HIS WINTERSLEEP 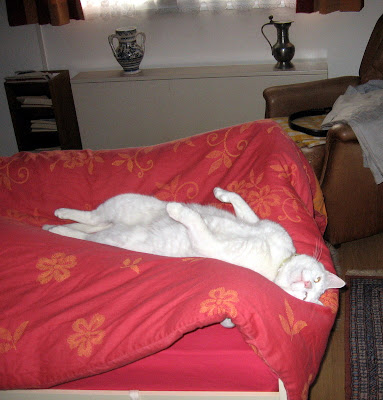 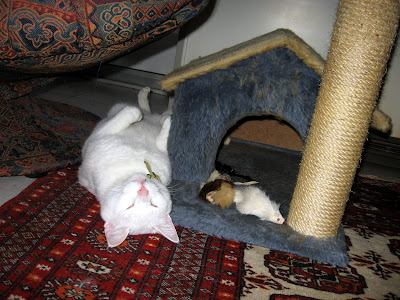 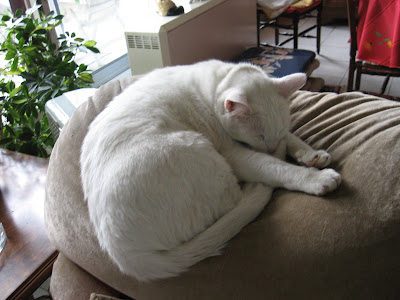 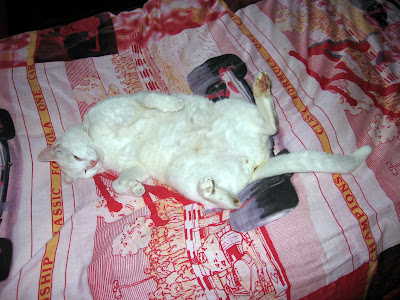 Storm, rain and cold weather and the shock of his late adventure, when he disappeared for 4 days, decided Arthur to put himself into a long winter sleep. (see above) But, when he woke up because his stomac claimed, he looked in a cat fashion magazine and that's what he found and suggests to all cats before they go out in the cold :