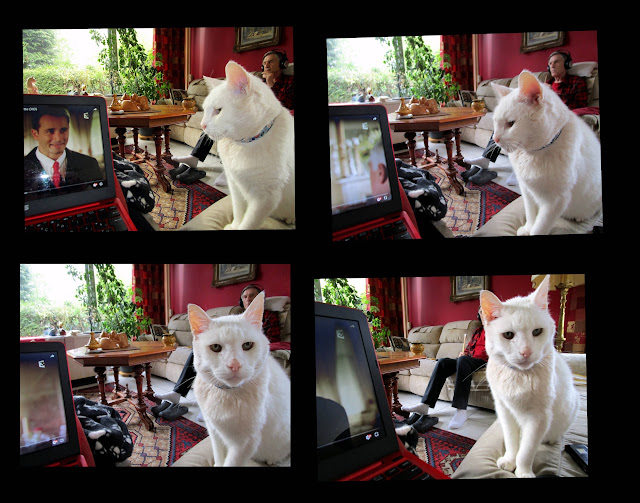 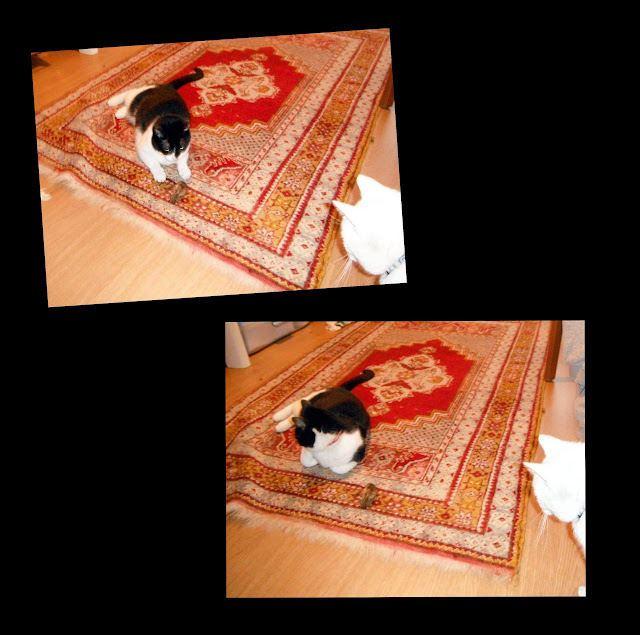 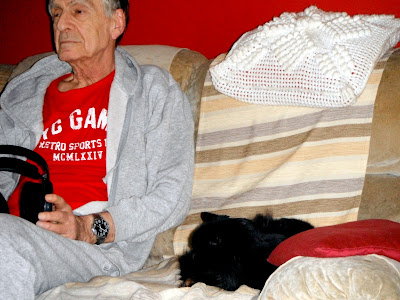 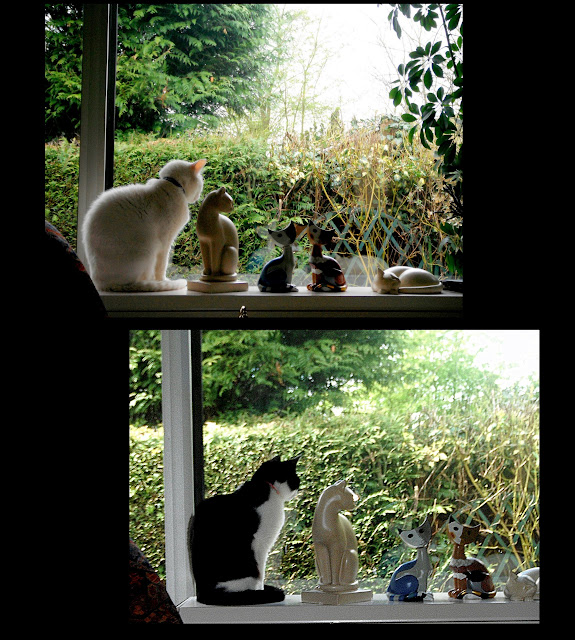 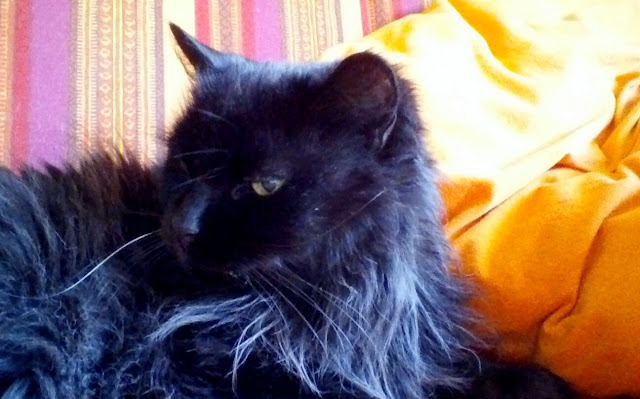 Sigh, I think I come into an age where I have to dye my hair ! 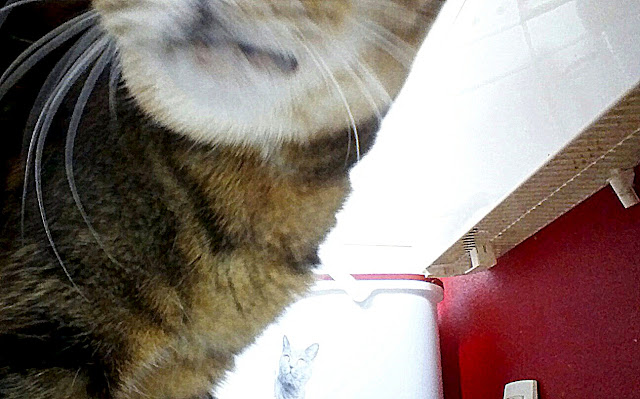 See what happens when you are pursuing me under the kitchen table ?? 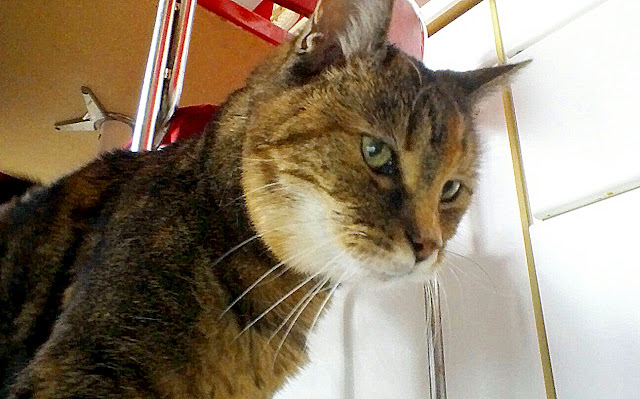 That's better, but you should see how you get up ! 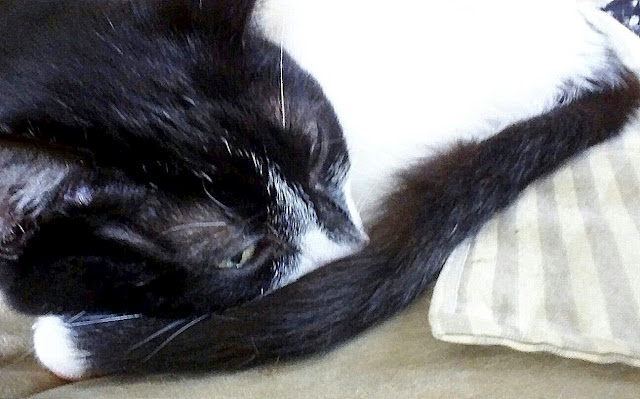 No ! I refuse to take my tail away ! A tail selfie or nothing ! 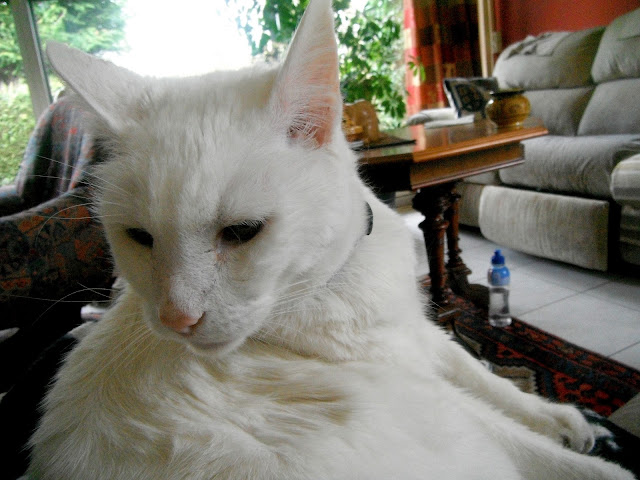 It's selfie time, I almost forgot ! 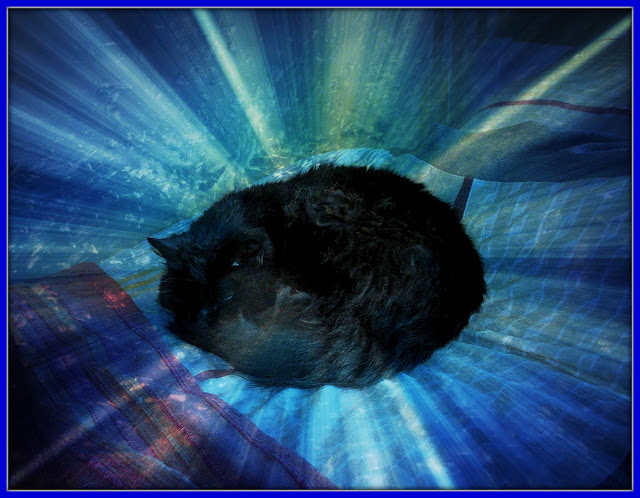 more participants at here
Posted by Gattina at 6:00 AM 7 comments:

I came back from my holidays in the South of France late evening and my cats, ALL of them behaved as if I had never left ! Apparently nobody had missed me. Of course with Mr. G. they can do what they want even dancing on his head and he would still be in full admiration of his darling cats !

So I found everybody sleeping in their usual places, the only one who made an effort to great me in the garage when I arrived, was Arthur. 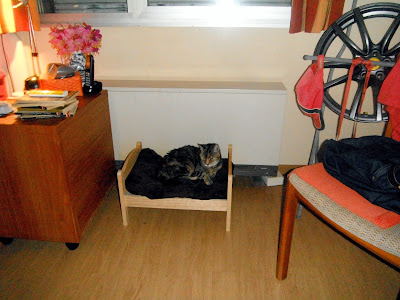 Pookie hadn't heard me and lay in her bed 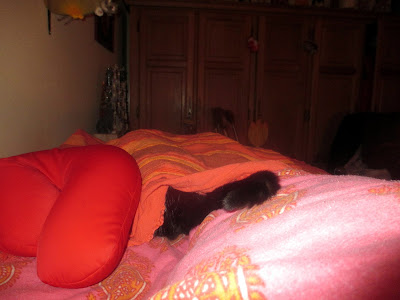 Rosie must have joined me during the night, because when I woke up I had this view ! I also remember that I woke up because she probably thought I was dirty from my trip and washed my nose and face !

As it was cool she watched her birds sitting on the heating, which is also Arthur's favorite place.

The next evening grandson Toby arrived with his parents. Arthur was happy but not for very long !
Toby didn't play with little cars anymore or other little moving things which could make a cat happy, 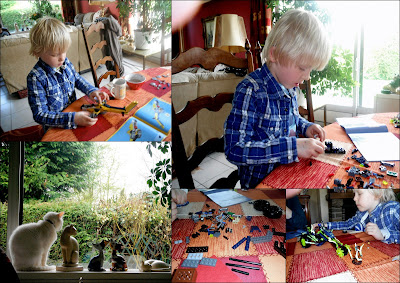 No he played with Legos  ugly things called Ninjago, which were Greek to me and the cats ! He was so busy to assemble an helicopter and a future vehicle, that he forgot about Arthur. 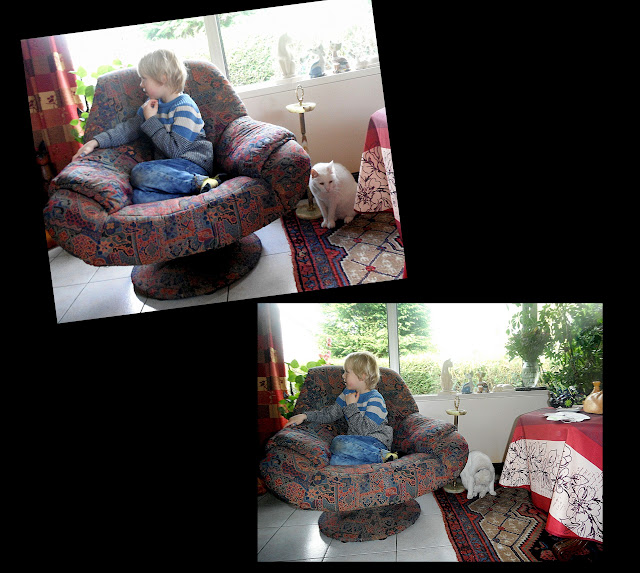 Even when he watched TV, he ignored him and didn't even pet him. 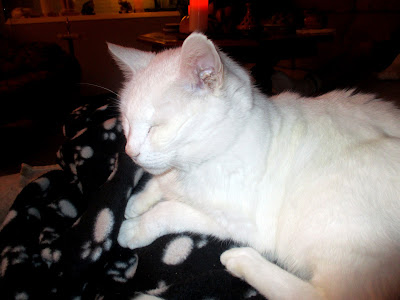 before he fell asleep.  He didn't even say good bye !

The other cats, realizing that this little human wasn't running around and making awful noises which hurt delicate cat ears or eventually chased their tails, returned all to their usual napping places and ignored this little intruder during his whole stay !

Oops I was too close, now I have a close up of my nose ! 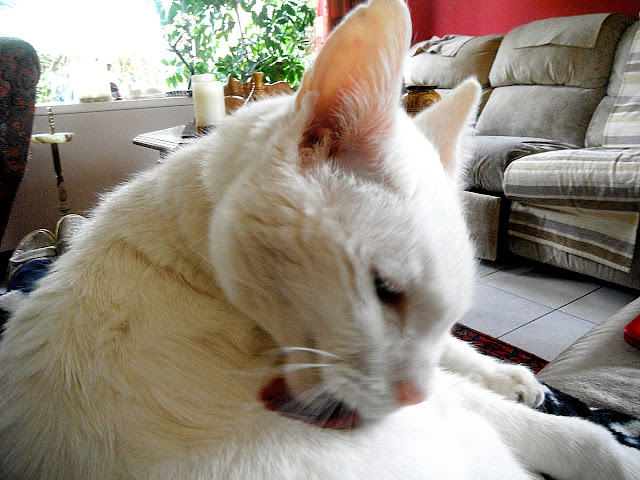 I want to do like the humans with their selfies, they show their tongues ! 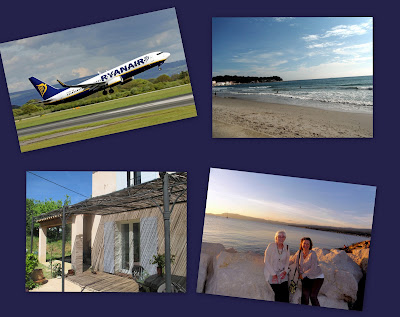 I will be on holidays in the South of France visiting my friend Claudie, as I do each year.
The cats will enjoy as usual, because they can terrorize Mr. G. ! 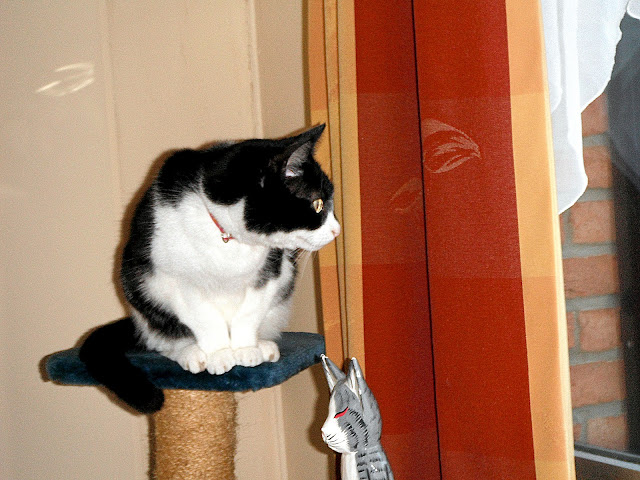 Rosie watches if the rain would stop and she could go outside to do some mouse hunting ! 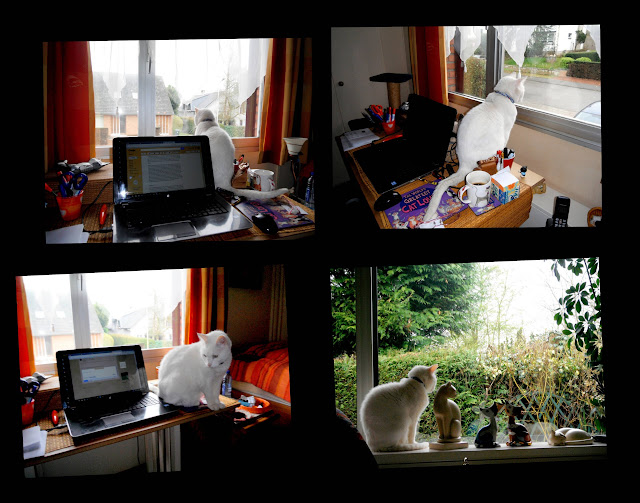 and Arthur does the same, although he prefers birds, but it's still better to stay inside. 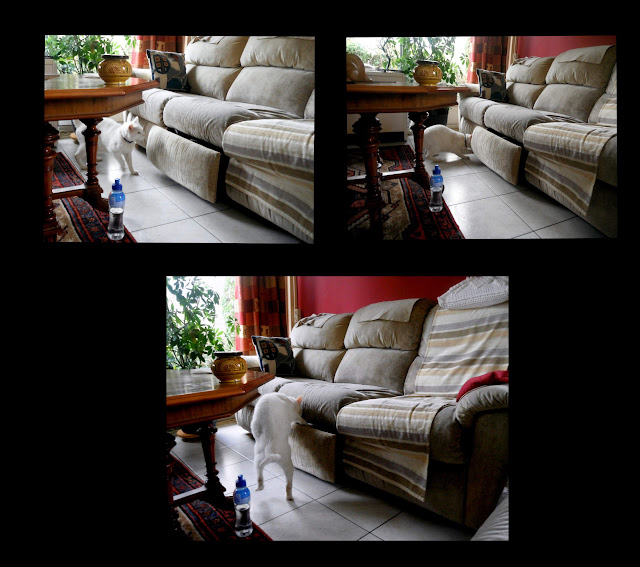 Apparently he is looking for a new napping place, he must have done all available places in the house, so he tried to open the drawer under the sofa and after a long and hard work, he finally gave up.

Then he meditated for a long time if he should settle down on Mr. G.'s lap ! 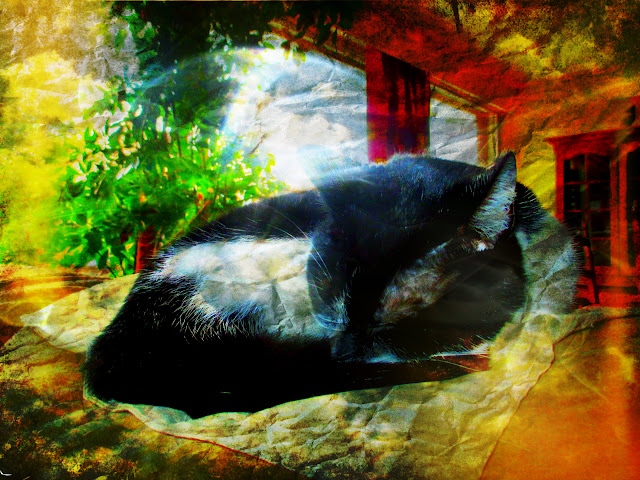