Finally ! The weather is sunny and the cats happy, they can go out ! Arthur inaugurated the garden officially with a big waterfall, just besides his cat statue. 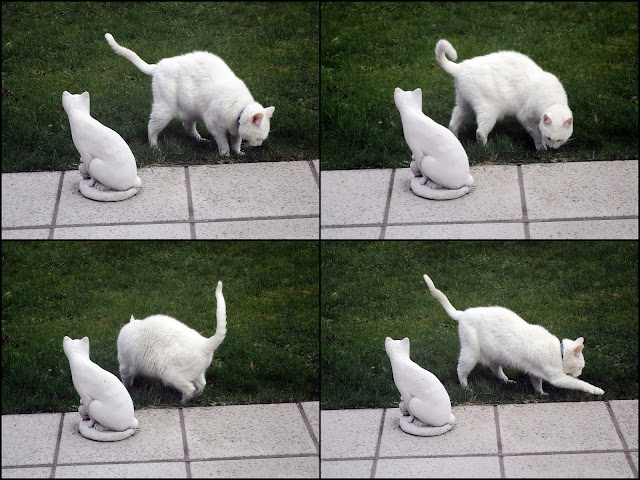 Then he went off and inspected the neighborhood. I didn't see him anymore until late afternoon.

While I was watching TV, I saw a little fur thing running over the rug and then sat down and washed it's face. At a closer look I saw that it was a cute little mouse with very big ears ! I called Mr. G. who came with the speed of a young snail with a paper cone in his hand to catch the mouse and save her from a certain death. The cats, all four were laying around on sofas and chairs ! The mouse hid under the TV cabinet. Arthur who had seen something moving jumped from his radiator and sniffed under the cabinet. Of course he couldn't go underneath the space was far too narrow. So he sat there for a while and waited patiently. The mouse decided to stay under the TV.

When we went to bed, I closed the living and just left open a little space for the mouse under the shutters of the window door. That had always worked. Once alone, smelling the fresh air from somewhere the mousies had always escaped. But unfortunately not this one. 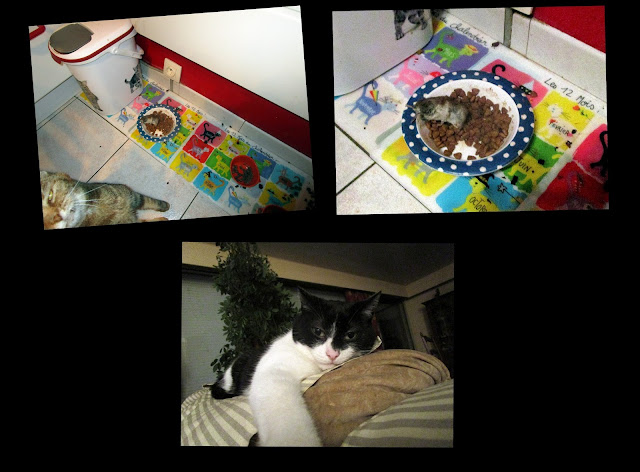 She probably was still in the living room when Mr. G. got up and opened the doors, because I found later the mouse in Pookie's bowl, dead of course. The murderer was Rosie, she is a mouse killer ! Then she was tired and rested for the whole day ! 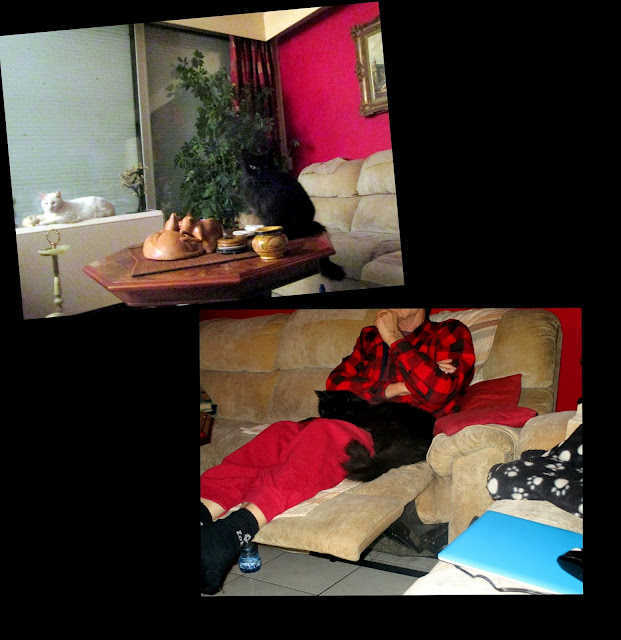 Our ex outside cat, becomes more and more affectionate. Even I am now allowed to pet her and could even brush her a bit. Not like her big love Mr. G. because there she waits on the table until he sits down and immediately jumps on his lap and remains there the whole evening. 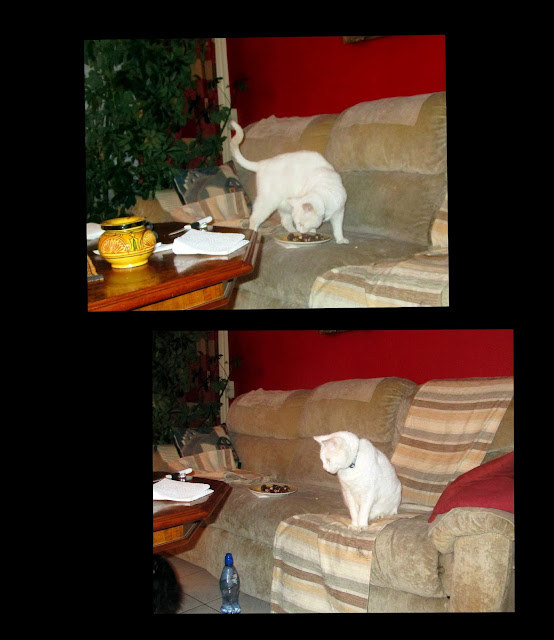 Arthur was offended, he had thought that Mr. G. had prepared a nice plate for him and then he stated that it was this awfully tasting chocolate which humans love ! 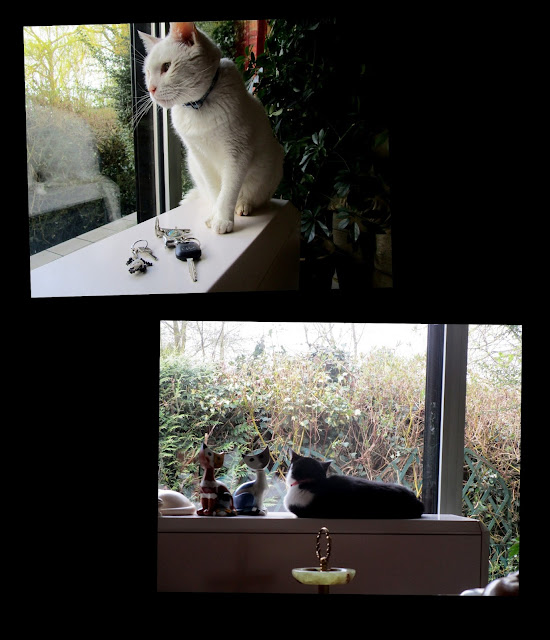 Arthur and Rosie always use the same radiator, although there are two ! So when one is squatting it, the other waits until it is free ! 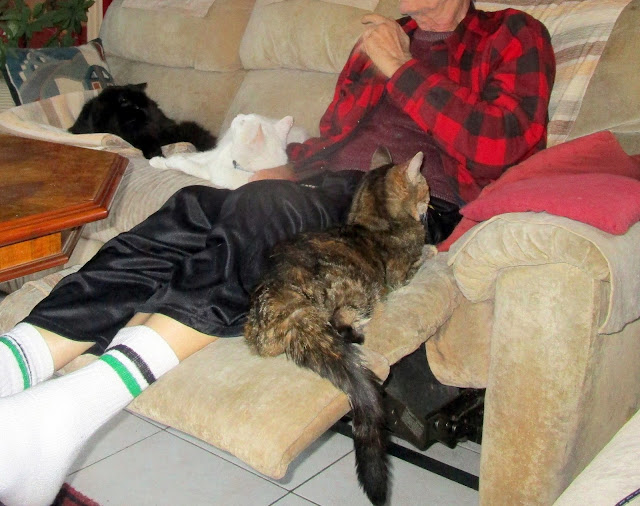 Evening Still Live, while watching TV,  only Rosie sleeps on my lap ! 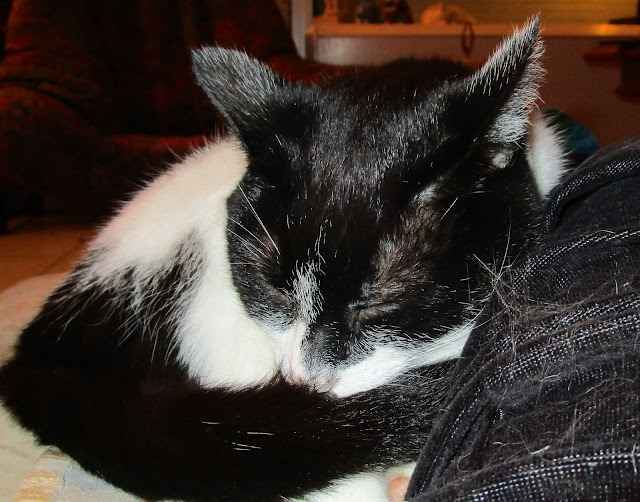 Why did you put the tablet under my tail ? Couldn't find the button, do it yourself, I sleep ! 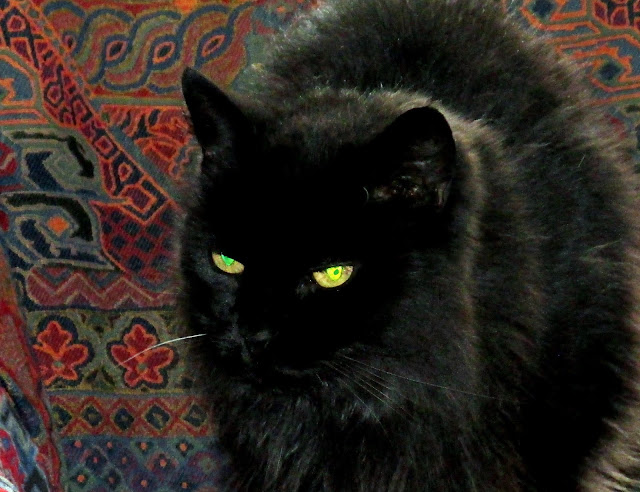 Is this the cleaning lady who comes and disturbs me while I am doing my selfie ?? 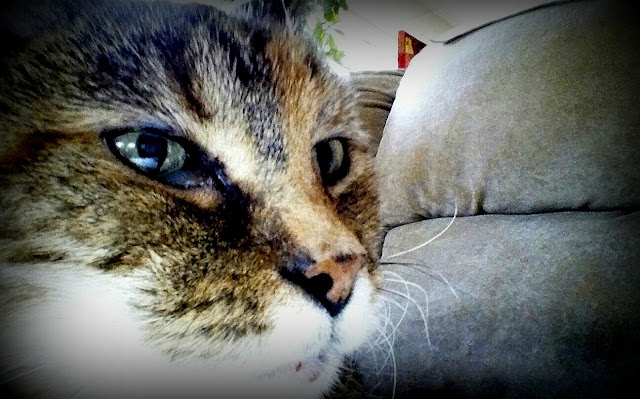 I am very satisfied with the result of this selfie ! I look as it was 15 years ago ! 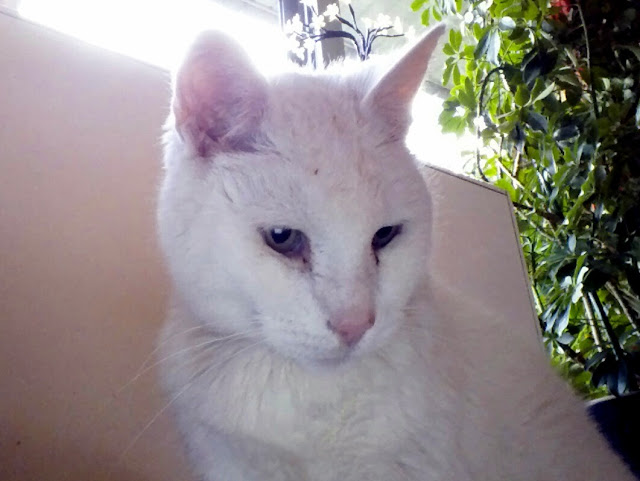 Why didn't you tell me that I have a dirty eye before I took the selfie ?? 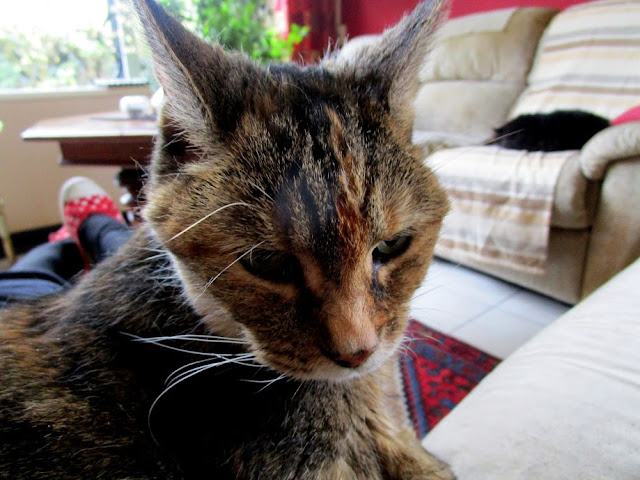 I think I have to eat more, my face doesn't look round anymore ! 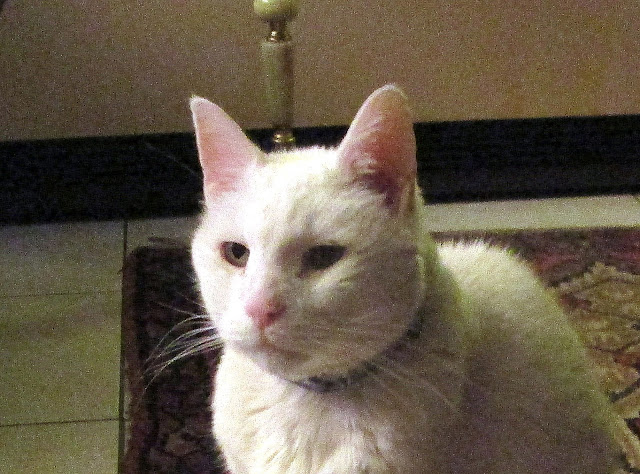 I still look good, no doubt about that, but I think I have to loose some weight, my neck is so big ! 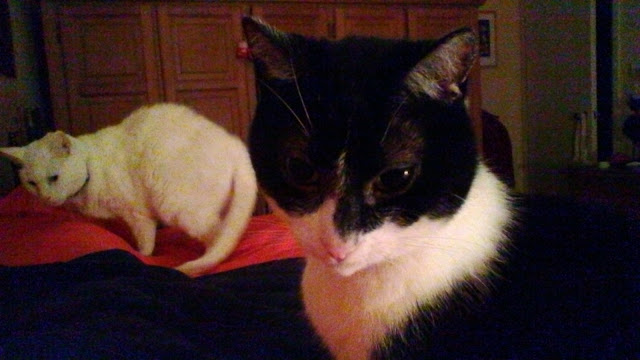 Arthur go away, you are in my selfie !! 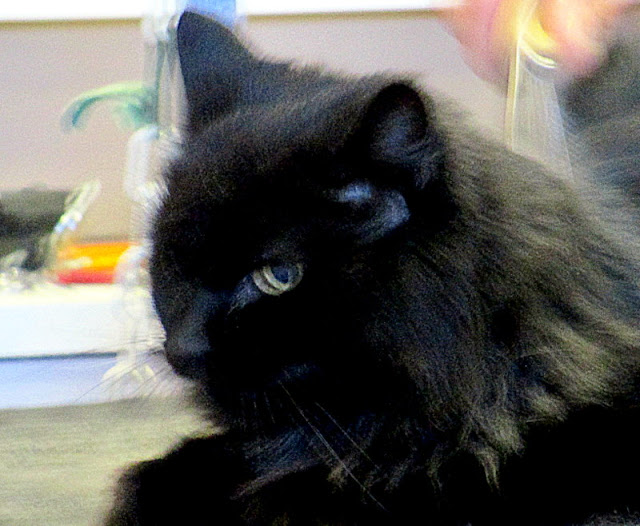 Strange, I have two eyes in one ??  and I don't wear contact lenses !

I had been visiting a friend in Germany and had to come back a day earlier because I had caught a cold. Therefore I have not much to tell about my cat family. 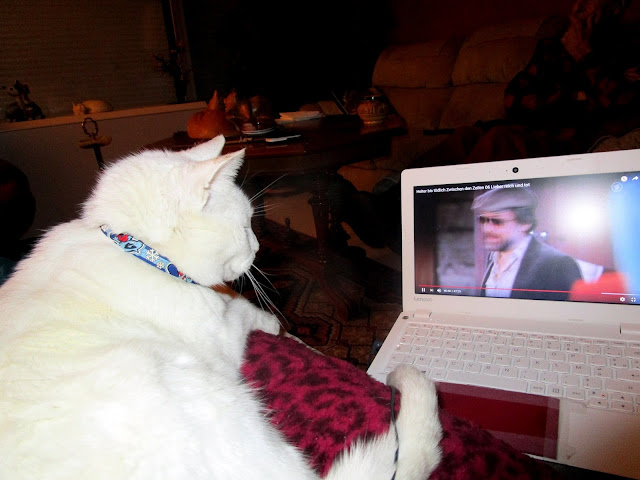 I changed from Computer to TV, suffering in silence, Arthur played my nurse and watched TV with me ! 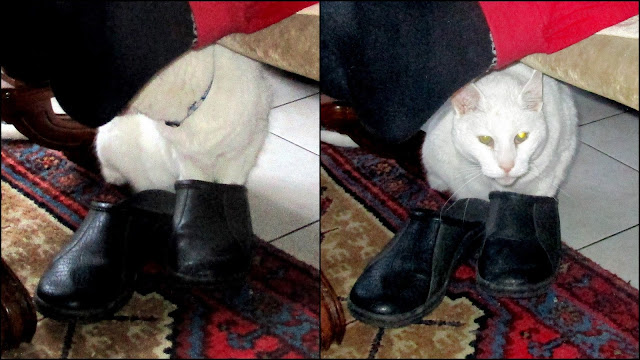 He also made me laugh because he tried to get into Mr. G's shoes, which didn't work of course he is to fat big and after trying for a while he finally put his paws in the shoes, while I despite my discomfort laughed my head off ! 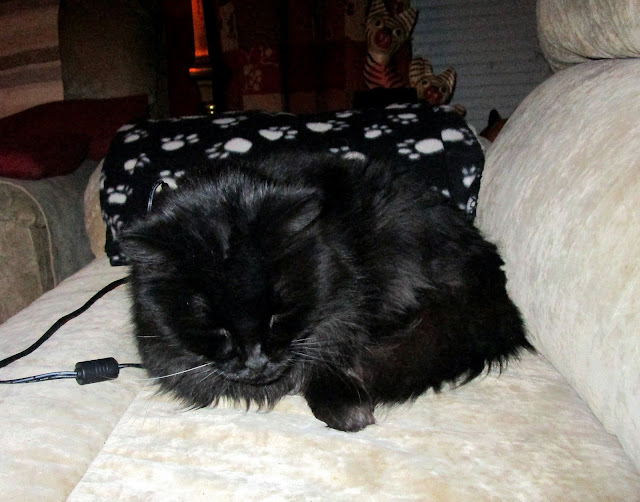 Kim as usual slept and waited for her darling Mr. G. Now she even lets him brush her belly and meows to be brushed. I can't believe it, this cat is really special ! 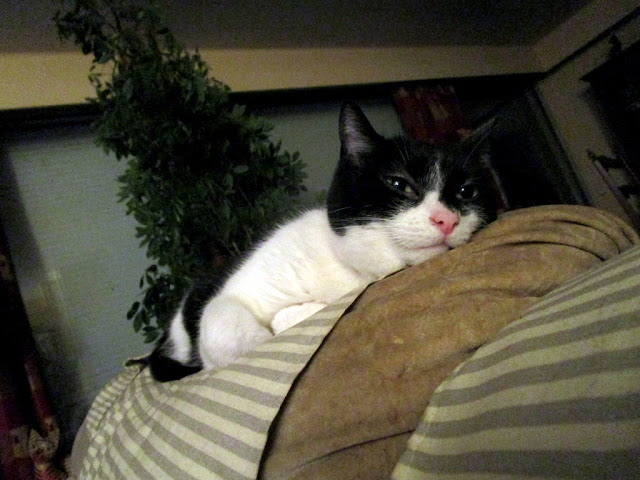 Rosie was all the time with me and shared my miseries. She lay behind my head, on my lap, and during the night besides me. Everybody who tried to come near she chased away ! 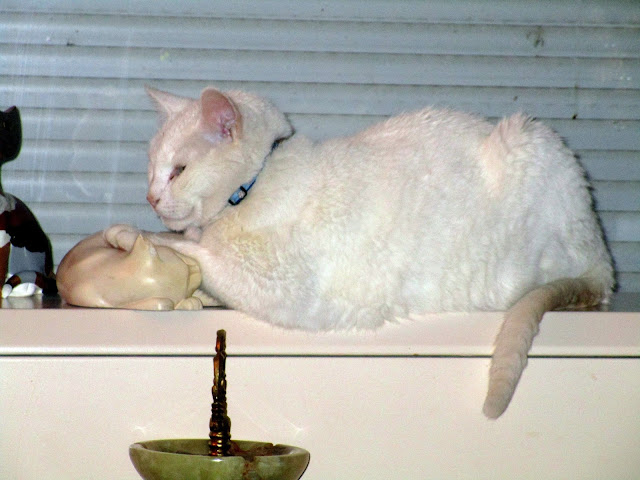 Arthur when he doesn't play the clown, he is a philosophe ! He sleeps on the warm radiator and waits for better times, when he can go out again and visit the neighbors.
Posted by Gattina at 11:07 AM 6 comments: 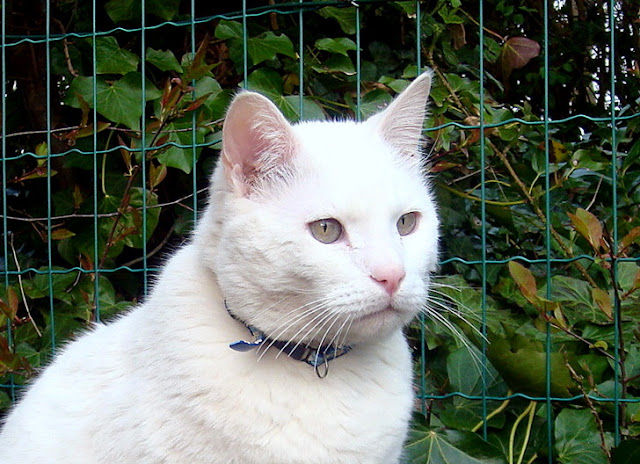 I prefer outside selfies, I look much better and I could see a bird ! 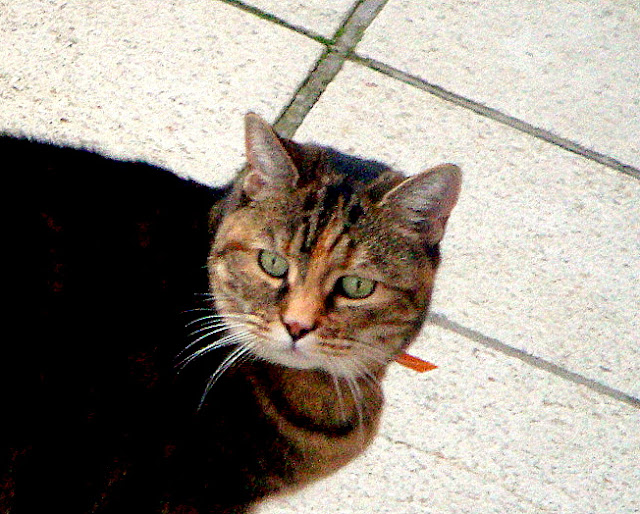 I just pushed the button, and now the mouse is under the tree !! Your fault ! 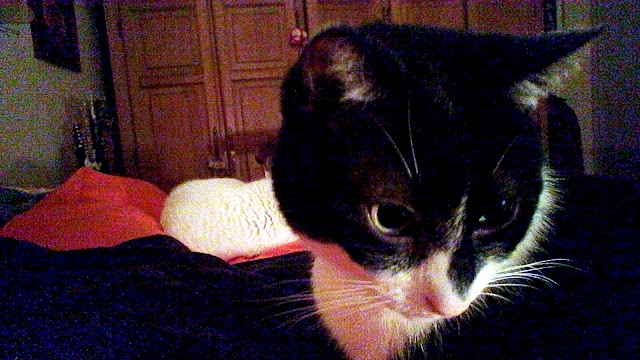 OK I do my duty, but I still think about my "to do list" for today 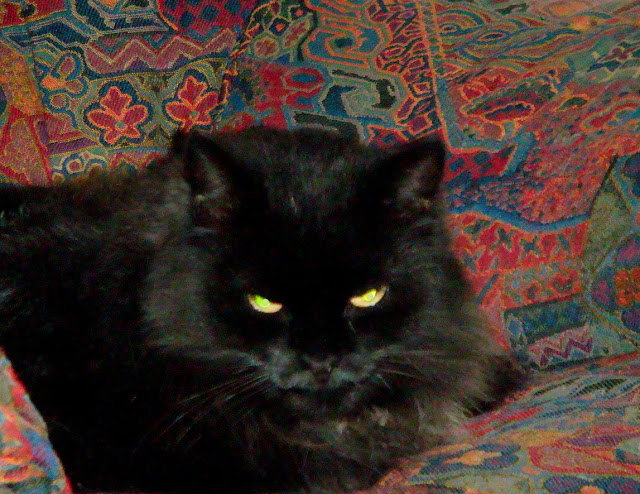 I have heard that there is a cat around named "Grumpy" ! I am not grumpy, I only look like !