Lisa despite her 18 years can still stand on three legs while using the fourth to scratch her ear ! Please dear humans, try this when you are 86 years old !
Posted by Gattina at 5:09 PM 10 comments:

I don't know what happened to Kim, the shy and never playing cat, but I saw her in our garden playing with something ! She jumped in the air, ran around and for once had a normal cat behaviour ! I had never seen her playing not even when she was a kitten ! 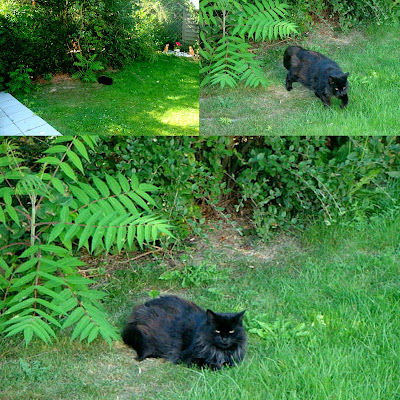 But then she had to lay down again and rest ! 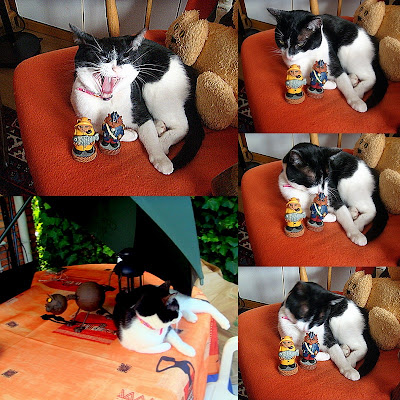 Rosie hasn't found new mousies to bring home and leave them in my way, she looked with polite interest at my little fisher costumed cats, I had bought for myself ! As it is warm or even hot, she spends a lot of time with me, when I sit outside and write. 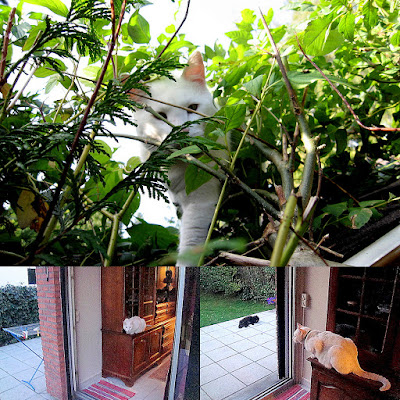 Nothing spectular happened to Arthur either, he now is mostly outside and sleeps in the shade under some bushes. Here he hesitates to join Kim, but decided then to rather climb on the roof of the garden shed.

A new house is built behind our garden, where fields used to be, and Arthur started to watch the workers if they do their work properly. I have to tell them to look in their cars before they leave, because Arthur loves to sleep in cars, no matter what as long as the door is open !

THE WELCOME OF MY CATS

When I came home on Tuesday night, I was only greated by Pookie who purred when she saw me and turned around my legs. She also was interested in my suitcase, and in me in general. Lisa also showed up and complained that she needed a new bowl fill up.

From the others I didn't even see a tail end. Rosie and Arthur were gone out and Kim was probably as usual in her tent.

During the night I woke up because Rosie had decided that she was not angry with me anymore and washed my nose with application then tried to roll herself around my neck and purred like a motor saw. I thought she could have wait until morning instead of waking me up in the middle of the night.

I didn't see Arthur the next morning either. He probably had eaten during night and as it was very warm outside he probably had slept somewhere else in the cool bushes or in a neighbor's bed.

When I finally saw him in the afternoon, he showed no feelings at all, and didn't even look at the cute little pepper and salt cats I had offered to myself.

I had a lot of work with my photos I had taken in England and as it was so warm I used my outside office. Rosie kept me company.


Pookie suffered from the heat and didn't know where to nap. First she tried the carpet

but moved then to the cool tiles.

I finally saw Kim as watch dog in front of the garden shed.

Lisa loves the heat which warms up her old bones. She was the only one who had caused a LOT of work to poor Mr. G, as he complained to me. He was completely overworked ! She eats and drinks like a horse but also has the same quantity of poos and pees. The poor man had to clean her private litter box several times per day, because when Lisa was in there once, you have to clean it immediately, otherwise she would choose another place which could easily be a carpet or the tiles. For that reason he was very happy that I was back !
Posted by Gattina at 9:54 PM 10 comments:

Today I leave Eastbourne and will spend the day in London before taking my train back to Waterloo.

She loved my computer and always wanted to sit on my mousepad.

Sophie is already a quite old Lady with her 15 years, but she is in a very good shape.

Pepsi the black and white long haired cat, spent the days on my bed when nobody saw her. She is mostly outside but became more social since I saw her last year.

Pepsi looking at me with a suspicious eye ! She is an aunt to Kim and comes from the same family.

Lilly is a half sister to Kim

From her I didn't see very much. She slept outside under a bush or spent the day in the wardrobe. Nobody knows why she is so shy, because she was born in my friend's house and never knew another family. Just like my Kim.

Conclusion, cats are all different just like as us humans and it's not always the fault of your childhood when something goes wrong.

Sophie and Pepsi feeling well on my bed !

This evening I will be happy to have my little Rosie besides me, hopefully without a mouse present, Arthur deeply sleeping and falling off the table with a loud boom and Pookie purring and purring as if she was payed for. Kim probably will stay in her tent. 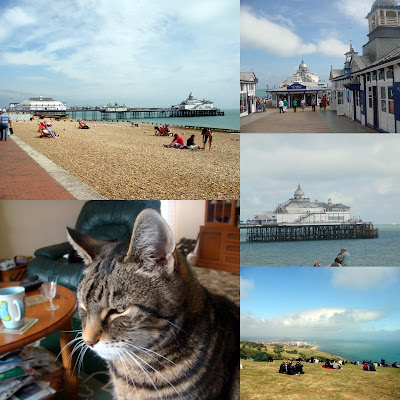 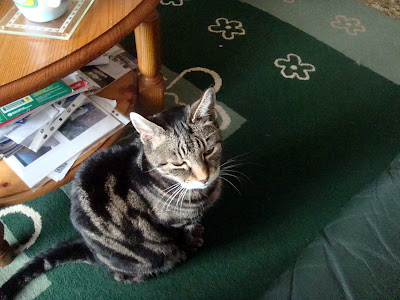 Here is Sophie an adorable cat who is very affectionate ! She adores cuddles and belly rubs. She became my private cat and has adopted me as her temporary servant.


Pepsi is rather shy and doesn't like visitors at all. With me she does an exception, she even allowed me to pet her, usually she would run away. 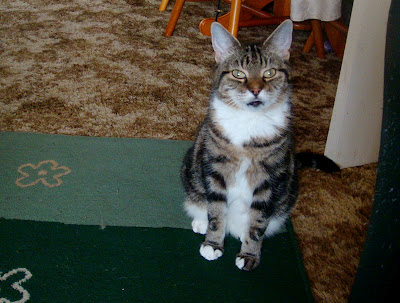 and Lilli is the wardrobe cat, although she is much better this year. The other years I didn't see her often, because she just left the wardrobe where she slept only for eating. She hates visitors too, but made an exception with me this time.

Of course I miss my little darlings, but at least I have some replacements.
Posted by Gattina at 12:41 PM 6 comments:


Rosie found a feather on the pation and asks herself and where is the rest ?

I am actually here in Easbourne at the south east coast of England, I arrived yesterday evening and of course hadn't time yet to take pictures of the three host cats, Lilli, Sophie and Pepsi, so I am not catless.


But before I left Arthur Pookie and Rosie helped me packing, while Kim prefered to stay in her tent, she probably will not even realize that I am away as long as someone feeds her
and Lisa decided to watch over my computer.

They will have a terrific week with Mr. G alone at home, he will give them all they want, especially too many treats ! In my case I can say "when the mouse is gone, the cats danse" !

Although Arthur doesn't suffer yet from rheumatism he loves to heat up his "old" bones on the warm tree bark in our garden.

Or on the gravel in front of the house, where he also watches over the car.

Last time when my friend Chantal visited me, and Arthur slept besides her, she said :"I never realized that Arthur has a reddish shade in his fur" !

No wonder when he sleeps and rolls around in the red gravel !

Rosie this little bitch with her innocent cute face, became a terrific mouse hunter ! In the last 5 days she has brought us 4 mice ! Fortunately dead, except the one yesterday which Mr. G had to kill himself. Since 33 years I live in this house and always had cats, but I never had such a mouse harvest ! When I think that there are at least 20 cats living here around then I wonder how many mice must live here now ?? It must be a whole army.

We thought we should rename her "Killer Rosie". Here she watches over the garden under the freshly washed bed cover.

My little sleeping pill Pookie as usual on her 24 h spot on the bed.

As a lot of elderly people, Lisa looks young on a picture, because you don't see how bony she has become. (People have wrinkles) She will be 19 in October and this would be 90 if she were a human ! She still could go into politics.