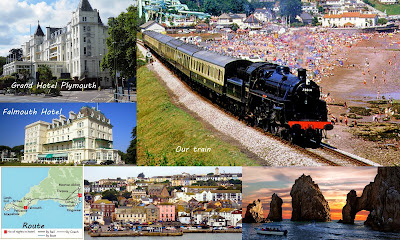 I am on holidays in Cornwall. My cats are happy they get spoiled by Mr. G. and I certainly will NOT be missed !

Arthur will try to eat in the plate 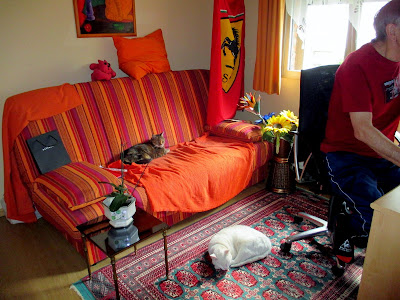 They will watch Mr. G when he sits at his computer 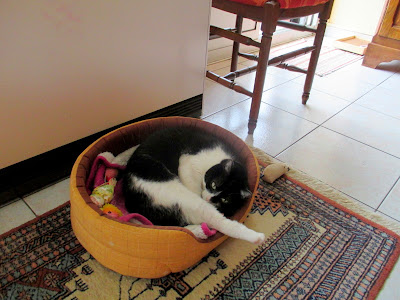 and Rosie will spend most of the day in her basket.
Posted by Gattina at 5:00 AM 9 comments:

I had discovered a new feature on my computer ! It takes pictures ! 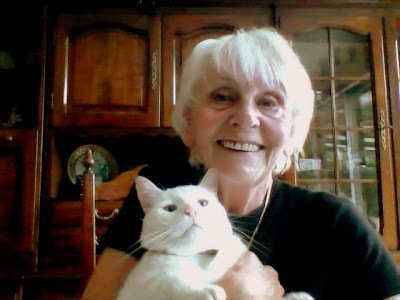 So I caught Arthur to make a "selfie" of us, he wasn't very happy and struggled to get out of my arms, but I managed to take this picture ! 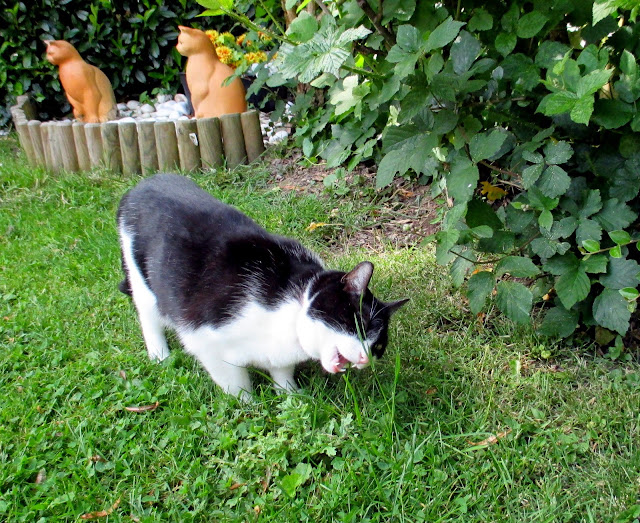 Rosie my little sheep, found that the grass had an especially good taste, she ate and then went inside to barf on a carpet ! Why don't cats barf on tiles ? 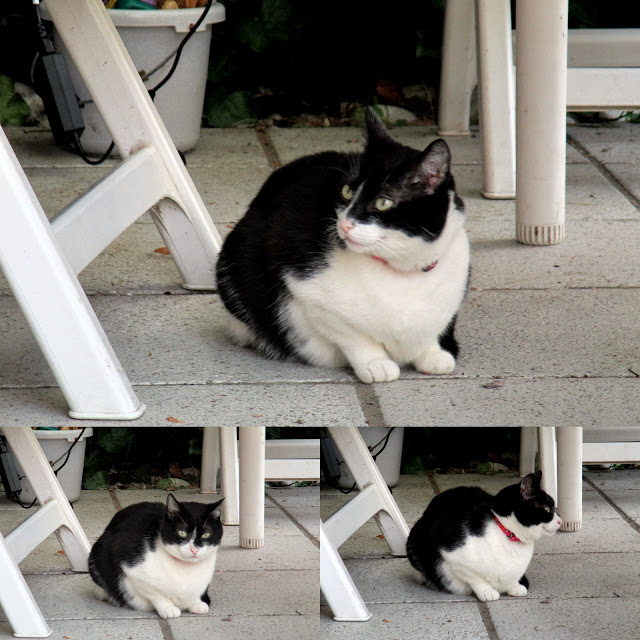 Still enjoying the good weather she sat under the garden table and did bird watching ! 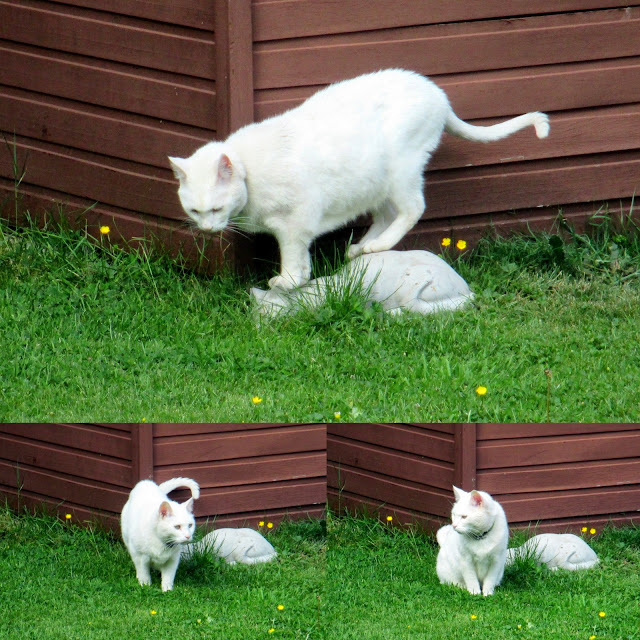 Arthur discovered his talent as acrobat and climbed on the little cat statue, he often even uses it as napping place, which looks rather funny one cat sleeping on the top of another !

Our week without Mr. G. went by without any problems, Arthur ate bravely his cat food.
On Sunday evening Mr. G. came back from Amsterdam and was very disappointed that no cat was there to great him. When I had picked him up his only worry was "how are the cats" ? I could have had a heart attack, this was more important.

He was happy to be home his holidays in Italy had been quite stressing. And then ... there was no cat ! 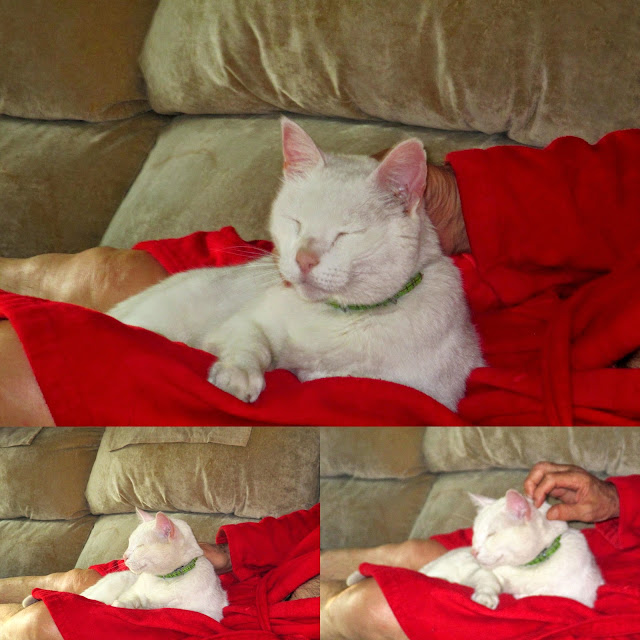 Arthur showed up AFTER supper, which is a miracle, and then found his favorite TV watching place on Mr. G's lap. They both were happy !

My friend Ilona had given me this cute little wallet. Pookie loved it too and used it as cushion.

As my cats enjoy a very good appetite, my stock was empty and I had to buy their menus, each cats eat different food ! 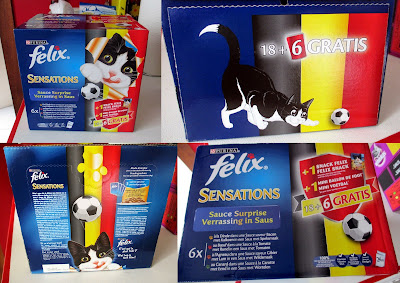 I went to buy their different brands. The Belgian football fever for the World Cup in Brazil had even affected the cat food ! On Arthur's favorite food was a Rosie with a football and a little football inside the box ! 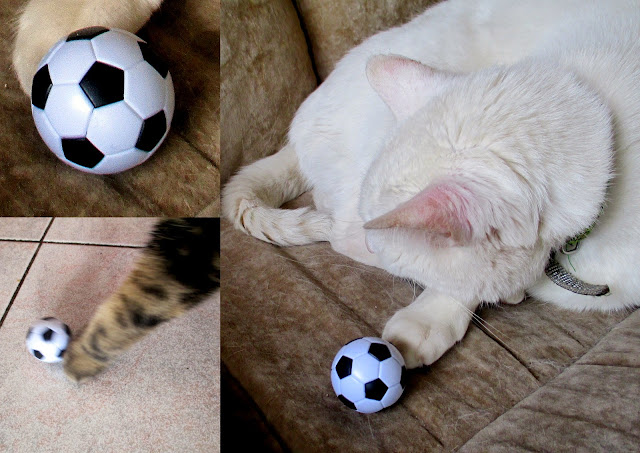 Old lady Pookie wanted to show that she is still fit to run behind a ball, but I could only catch a paw. Arthur wasn't impressed by the ball and continued his nap, and Mr. G. doesn't like football either, for the moment we feel like outsiders ! (More about the Belgian Football team craziness and merchandising here.)

My cats are half orphans ! Mr. G. went to Italy to see his sister and is gone for 10 days ! I thought at least Arthur would miss him and all the junk food he gets from him, but not at all, these ungrateful cats behave as if they wouldn't miss him at all !

Arthur tried twice to pull out food of my plate with his paw, but got a little slap and was pushed to the floor, so he gave up (for the moment) ! Maybe there is nothing interesting in my plate either.

Ever since I am on holidays with my cats ! The weather is sunny and warm. 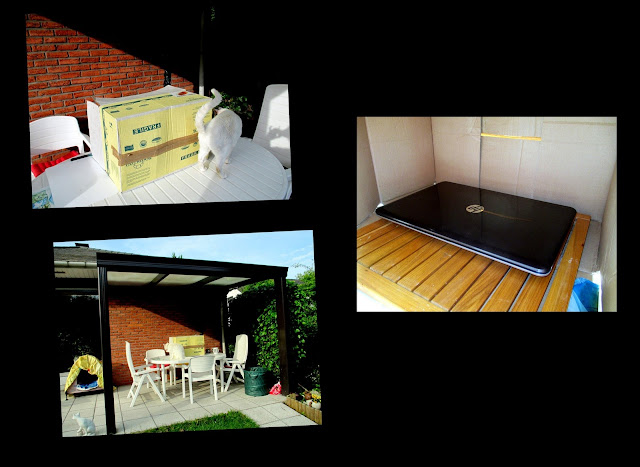 I installed my computer and made an office out of the terrace. Arthur of course had to check what was in the carton, in which I put the computer because of the light. Even Kim stays and lays in her tent. 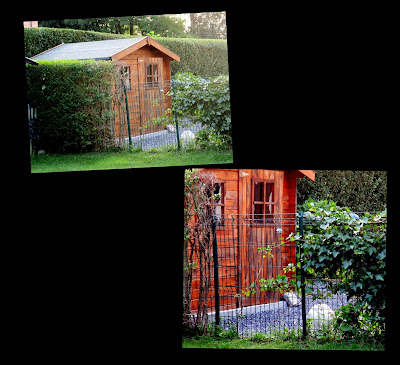 One morning I saw him arriving in a hurry from the neighbor's garden, 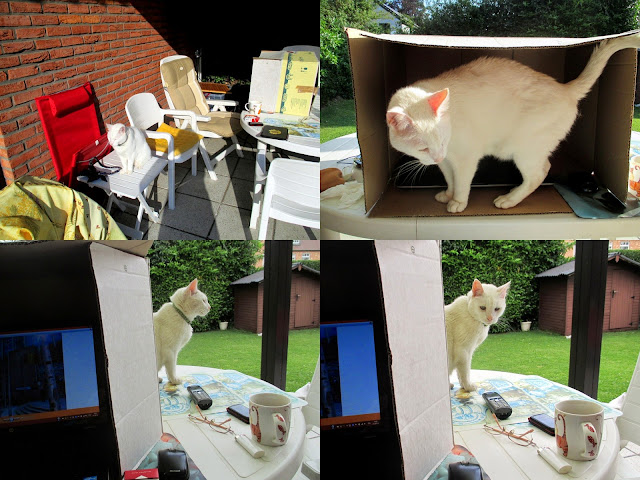 and was quite happy that I was still in the garden the next day. 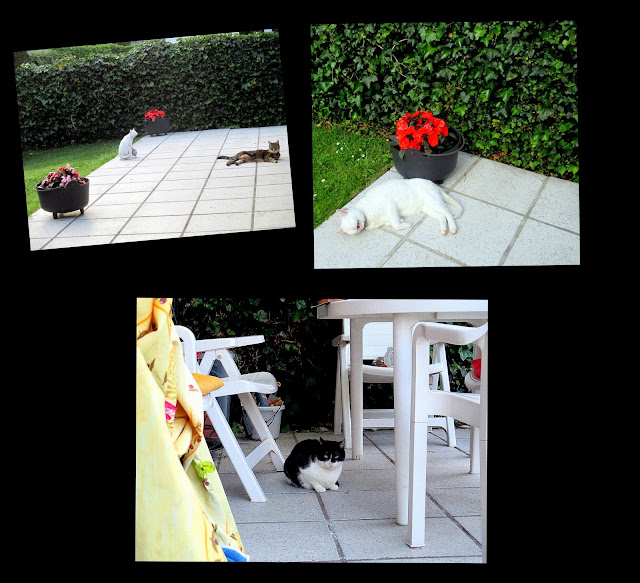 They lay around happily in the sun, except Rosie who prefers the shade. 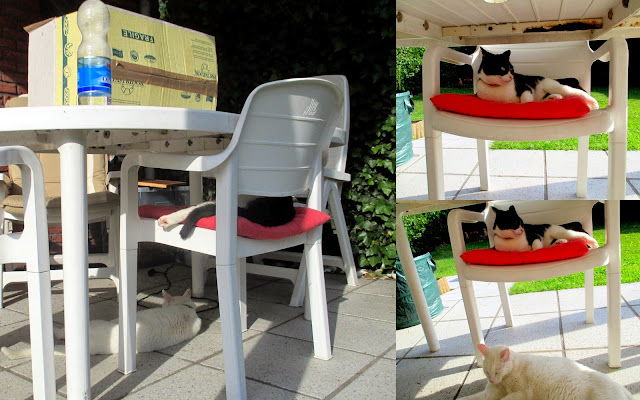 They really take care of me so that I don't feel alone !

Our neighbor dog barked and Arthur and Rosie were scandalized ! How could he dare to break this peaceful atmosphere ? 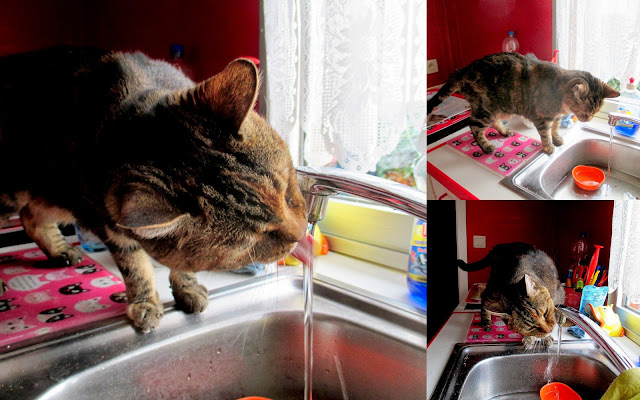 Pookie continues to meow and wakes me up in the morning ! She is so kind to wait until 7 but still, sometimes I am not ready to leave my bed. I feed her each time I go into the kitchen, because she behaves like a starving cat. I only add a little bit to her bowl, it's more psychological then hunger ! As she used to drink from the tap, I lifted her up once as she can't jump anymore. From this day on, she sits on the floor fixing the tap and meows so that I lift her up again. Jumping down is no problem for her. It's hard to get old !

One morning when I woke up and opened the stores, Rosie jumped on the dresser what she had never done, while Pookie meowed for breakfast besides my bed. 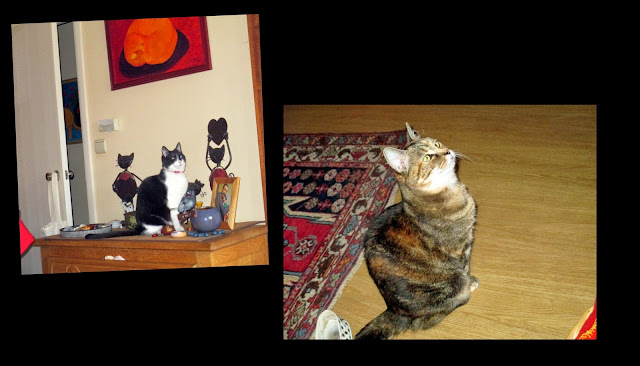 and they both stared towards the window. I wondered why and when I got up I saw a Daddy long leg spider sitting on the white curtains ! A German proverb says that spiders in the morning bring worries and grief ! How nice ! 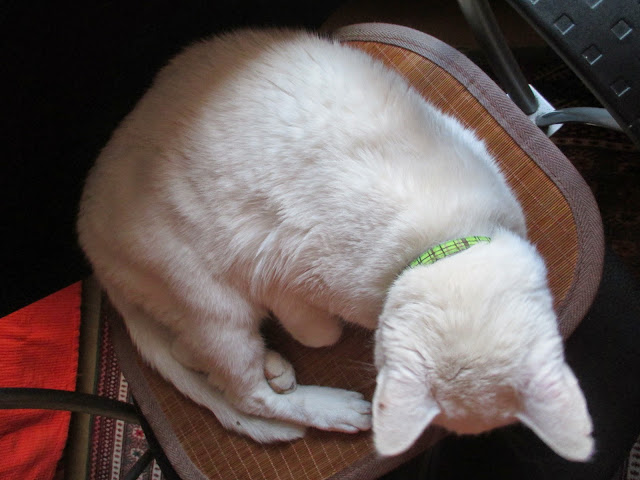 Arthur lost his collar in a Waterloo battle and I had to buy a new one. This time I choose a Scottish pattern ! He looks very elegant ! 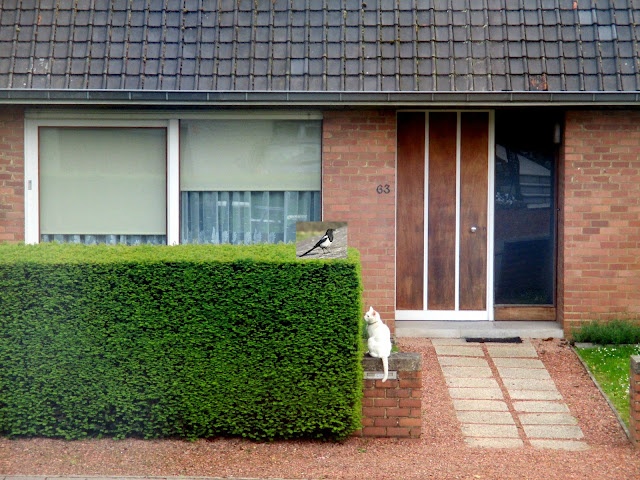 Ever since I had moved my desk under the window and do Google street watch, I saw Arthur sitting on the Neighbor's little wall talking with a magpie ! And they had a loud conversation ! Arthur croaked like a frog and the Magpie screamed like a hysterical woman ! I was a little worried because Magpies can be dangerous for cats they attack them, but looking at croaking Arthur it finally flew away. 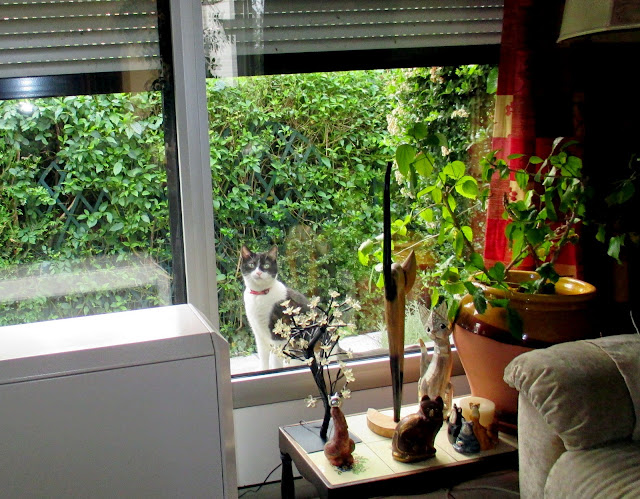 Rosie has become a stalker ! We watched TV one evening and felt observed. It was Rosie looking through the window !