Since Pookie was a kitten, I noticed that when I had a alu foil in my hand (from my cigarettes for example, and yes I know smoking is bad) she could be asleep somewhere but suddenly showed up like a flash and sat in front of me with big eyes waiting that I made a very small foil ball , the smaller the better, and then threw it for her somewhere in the room. Then she got crazy and ran and jumped behind the little ball, using her paws and played football (soccer) or basket or whatever. Now you would say all cats do this and that's true. But the special thing with Pookie is, that when she has catched her little ball, she picks it up in her mouth and brings it back to you ! Just like dogs would do. Then she lays the ball on or besides my feet and looks at me, waggling wildly with her tail, asking me to pick it up and throw again and that she could do for hours ! 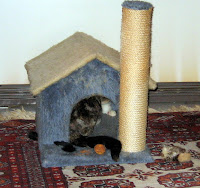 Since at least 3 years, Pookie hasn't used the cat house anymore. Nobody uses it, they sleep besides or just before but never in, except this week.

I discovered Pookie in the house. At first I didn't see her but then I took this picture to keep it for eternity, it's such a rar event.

I had some chocolate in my hand wrapped in alu foil and she heard the noise when I took the foil from the chocolate. 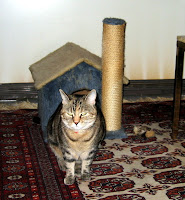 She came out, looked around. (Eyes should be wide open)

and run over to me. Of course this you can't see because I had to take my camera and first put the chocolate away. 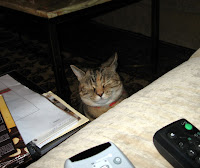 Then she looked at me with wild huge tiger eyes, just like on the picture. (I ask you to use your phantasy, because the poor thing was blinded by the flash) ! 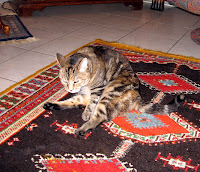 She jumped on the little ball felt on her bottom turned around and put it in her mouth. 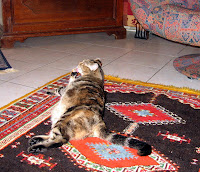 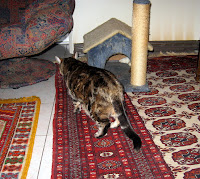 And again I threw it and it landed behind the chair, she brought it back put it down to my feet and as I threw it again, she kicked it under the sofa. 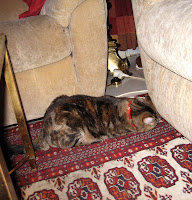 Now to find it was another story.

finally she gave up and returned to her cat house. 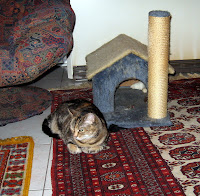 But not inside of course, that was an exception, now she sleeps again outside.

Conclusion, as the living room is cleaned once a week (don't forget Mr. Gattino doesn't make any crumps and is quite clean for a man) we can collect about 10 - 20 foil balls in all corners and under the furniture. If I were Mrs. Gates I would threw $ bills !

That's how I spend my evenings.

And Sir Arthur watches the show and after a while falls asleep.

This is the sleeping position of a discrete, distinguished cat.

Wow I'm first! What a lot of news this week. I can't wait to see the cartoon. That is so cute that she retrieves balls! Your cats interact with you so much. I loved the hats for the cruise post: Arthur is just great sleeping in that hat! Have a great week!

Punkin retrieves, too! We thought it was odd, but she enjoys it so! We throw little plastic nubs from my insulin syringe ends. Just small enough to pick up in her mouth. She likes them thrown down our hallway. But the boys interrupt and she gives up. sigh....

Sir Arthur has it down. he knows what hanging out really means...

Aw, Pookie is a great cat -- I love that she retrieves for you. None of my cats will do that. Stevie's half-sister, Toto, (my son J.D.'s cat), used to retrieve but he says she doesn't do that any more. Your pics are very enjoyable!

Pookie is a smart cat. She knows how to play, and engage her people as well:) And, I'm sure she has heard about the cruise. Why else would she use her old cabin again!

I've posted a secret from the stay in Oslo. Hope the video is up.

btw. Thanks for wonderful posts and photos from Waterloo.

What a smart kitty !! Bambi doesn't retrieve, but she throws her mousey, or balls, or whatever, around herself ... only if it happens to roll near my feet am I allowed to touch it again !!!
Great pictures.
Take care, Meow

That is cute! Maybe I will join next Tuesday....

Pookie is adorable. Mr. Rhett will retrieve but he likes to make you exercise for him, so he drops things about four feet away. Just far enough that you have to move out of the chair to get it. Of course the five seconds while you are out of your chair, he jumps up into the chair and takes your place.

Your cats should get sunglasses to protect their eyes from your camera's flash!! Pookie not only plays like a dog she housesits like one...that's why she sleeps outside that cute cat house.
Arthur's distinguished manners crack me up. Happy tuesday!

I meant, Pookie is a watchcat!

Pookie, you are a very smart cat! It is very cool that you play fetch with your human. :) I like to play with crumpled up paper balls, but normally I make the humans fetch the balls for me.

You look lovely in your photos! And you are very cute in the cat house!

I'm lucky that my human usually turns off the flash when she uses the camera. That way it doesn't hurt my eyes!

I keep watching that black kitty jump out at the kid below...that is too funny.

Pookie sounds like a lot of fun to have in the house. Calista is the only cat I've ever had that will fetch her little balls and they all are of a distinct fabric, maybe I will give her a foil ball to see if she likes it.
Enjoyed your pictures as always....off to meet Lehanne.

I love your blog, Gattina.

We have a new addition to our ever-growing family. I actually posted about her on Sunday and left the link for that entry in the Mr. Linky thing.

I just posted the beginning of my story of Sebastian.

I see you also have a very comfy, beautiful carpet for your cats! My COT speaks of a carpet and Anela.

i have only ever heard of one other cat that would play fetch and actually bring the ball back. what a treat! lol

and always i love seeing arthur in his sleeping positions! how he makes me laugh! (better not tell him, i would never want him to think i laugh at such a distunguished gentleman...)

Princess Ginger at home sleeps like Sir Arthur too. Maybe its just the way the royalty sleeps.

Oh Gattina, I have just been catching up on your posts and have thoroughly enjoyed the humour about what your cats get up to.

Oscar has a little soft rubber ball that bounces so well. He loves me to bounce it has hard as I can...then it's all on. He bats it all over the place, tearing around after it and generally having a great time.

Sorry, Oscar's late for Cats on Tuesday, but he has posted tonight.