ARTHUR AND THE VISITOR 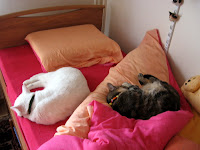 Spring is in the air as you can see here with Arthur and Pookie ! They suffer from severe spring fatigue.

Yesterday Gianni, an (of course) italian friend of Mr. Gattino came visiting us, to the great pleasure of Arthur. He loves guests. He immediately interrupted his spring nap and came over to sniff at Gianni's feet. He always has wonderful Italian leather shoes which of course smell also very good. Arthur likes to smell leather. He settled down on these nice smelling shoes and looked around. Poor Gianni was slightly worried that Arthur would scratch them. 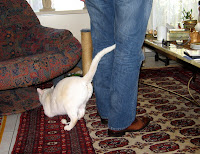 But he decided then for something to play and found finally one of his varous mice , a white one of course, because white suits very well his fur. He also has black mice but he prefers whites, he is an optimistic cat. 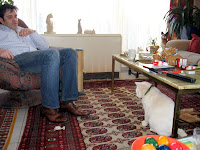 When he had found it he brought it over and layed the mouse to Gianni's feet.

Gianni threw it at him, that's of course what Arthur had expected. With one paw like a basketball player he catched the mouse and made his "cute cat show". 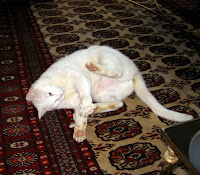 Meanwhile Gianni had told us that he had had a terrible accident the evening before and it was a wonder that now he could sit here and watch Arthur. As he still felt a little dizzy, Mr. Gattino thought he should take Gianni's blood pressure. 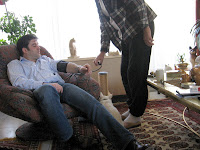 He brought the thing in and of course Arthur had to check immediately what it was. and when that thing made strange noises he even had to take a very close look. Mr. Gattino feared for his instrument and waved Arthur away.


Arthur was first a little offended, but then he thought that he should look cute, so that all of us wouldn't look at that strange thing anymore, but at him. 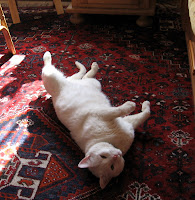 and this is the result of his efforts !

Arthur is such a showman! LOL What a love! So interested in everyone's doings. A natural supervisor type. Blessing is the investigator in our household. He MUST know what's going on and who's involved! Even outside workmen! Gets right into their tool boxes! LOL

I think it's so neat the way Arthur gets in there and investigates new and interesting doings in your household. My cats would have run and hid, except for Socks, who is the most social of my 3.

What a show off he is! My kitty would hid as well if we had visitors, and would stay hid until she felt it was "safe" for her to come out.

I'm up early, I may be MIA tomorrow... we are supposed to have nice weather and want to take advantage of being outside with the kiddos.

Have a grear "early" Tuesday! (well early for me *wink*)

He is so cute! I love how they decide t check things out! NOt camera shy!

Arthur is such a showman! He entertains your guests so well Gattina! He looks like a bit of an athelete too catching the mouse like that... good job Arthur... good job catching the mouse, and good job being so curious :) Maybe he would like to learn how to take the blood pressure, hey you never know ;) Happy Tuesday from me and Nermal to you, Arthur and the rest of the gang :)

Arthur is such a "ham", he should be on stage. The Arthur Show would be a big hit for cats and humans alike. I have two such cats who love to stick their nose into everybody's business. They are very, very funny.

i should think that such a cat would be able to bring anyone's blood pressure down. i'm sure arthur knew exactly what he was doing and was precisely the good treatment the doctor (dr. arthur) prescribed for Gianni.

Arthur, don't your humans know that you are just acting like a cat, being naturally curious? Nice job with the mouse catching. :) You are a talented hunter. Good job looking cute too. :)

I think, Arthur, that you should be a Hollywood cat. You would be beautiful in a movie with all your antics and your almost human behaviour.

That Arthur is shameless! He really has to check things out! My Callie is like that too! Very annoying sometimes!

Arthur is such a ham for the camera. He has so much personality.

I had to put a new link in as I had a typo in the first one and thus it didn't work.

You always have such a great story to share!

He-he Now he's Doctor Arthur. And suddenly he is Clown Arthur. And Arthur the Controller. He is really a personality.

Cats are such curious critters ... they always want to know what everything is, don't they.
Great photos.
Take care, Meow
PS. your linkies won't let me add my name :(

Thank you for your comment.
I'll try to write in english, even if it's no so good.....

I want to load some photos of my cats on my blog, but I fail!!!

Arthur is a good kittyboy and a generous and friendly host to give up his naptime (due to severe spring fatigue, such suffering) to entertain the visitor.