If by any chance you walked by our house this morning then you would have heard a big sigh of relieve ! Arthur feels better, in fact much better because he took up his favorite game of "Pookie chasing" ! Still locked inside yesterday, he had worked with application on our nerves. Each door leading outside was sieged by him, sitting there and meowing like a sirene announcing an attack !

Today it is a week since his tail accident (see below if you don't kow this important world changing matter) and I decided that he could run outside behind girls instead of bothering poor Pookie with his accumulated energy. It also is raining, cold and grey and I thought with this weather he won't stay outside very long.

But Arthur, now that all doors to paradise were open, decided otherwise. He remained on his (mine during nights) bed and washed. Probably he had to think over this whole story. I thought this would be a good occasion to check the sensibility of his tail. 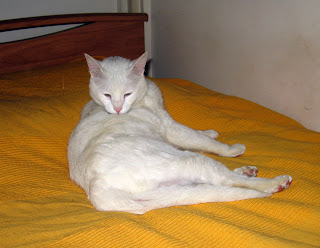 Tail position n° 1, I put it against his body. No reaction 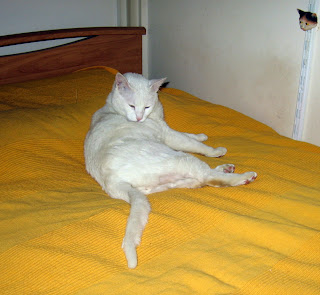 Tail position n° 2 I pulled it straigth. No reaction 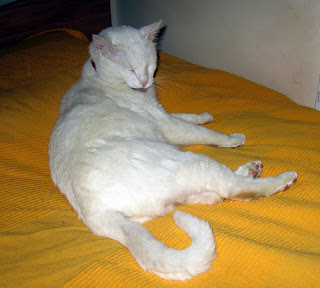 Tail position n° 3 I folded it, no reaction

In normal times he already would have killed me as he didn't support at all his tail being touched, stretched, pulled, folded or whatever, but now it's completely unsensible. It's rather funny to see him running or walking around because his tail swings with each body movement and hangs down. Apparently that doesn't bother him anymore and he shows his old himself. What a relief ! The only problem which remains now, does he get his "tail feelings" back or has it to be cut off ?

After this, Arthur disappeared armed with a new collar and telephone n° to say hello to his friends and came back after an hour.

Has anybody experienced such a tail tale ?

It is wonderful that Arthur is feeling better and adjusting well to his new physical ailment.

I do hope the senses return to his tail. What a shame it would be to need to have it removed. Such a lovely appendage!

I will keep Arthur in my thoughts for a full recovery.

I'm sorry to hear about Arthur's tail. He's so beautiful, and his tail is part of that! However, I know that a kitty can do fine without one, as my Stevie is lacking hers. She had it damaged in an industrial accident when she was a shop cat, and it had to be removed. This was before I adopted her here at the house, about 10 years ago. She does fine without it, although it's sad that she had to lose it because it was so pretty. I love her just the same. I will be thinking about Arthur and watching to see how he does!

Arthur looks like Macavity, the cat that I blogged today...

Gattina, I'm not sure I know the story of my Arhtur baby's tail. What happened? Whatever it was, it's good that he seems to be mending well. But why is he at risk of losing his tail? Poor sweet kitty!

Oh My Gosh! Poor sweet Arthur baby! I went back and read the story of the tail. I sure hope there is nothing more to this story. I hope everything works out well for him! Keep us posted.

Oh dear. Poor Arthur! But I am glad he is OK now.

Hi Gattina: My Mouse has a tail that is partially paralyzed but she can hold it up out of danger. I never knew until one day I accidentally stepped on it and she never hollered at me. The vet said she most likely would have to have it cut off but nothing has happened and she still has it. I do notice that over the years, she can't hold it up as well and it is usually dragging now. But when she needs to, it is up. So don't lose hope. Healing may take a long long time.

Sophia would kill me if I did that! Glad to hear he is doing better - Purrs

Poor Arthur! I had missed the post where he squished or broke his tail! I wonder what happened.
I know from experience that when Tom's go after a young Tom they will pull and bite their tale but this is not the case here....my friend's cat almost lost his tail when a Tom attacked him, and her cat was fixed. But Arthur would have a wound if that had happened.
I wonder if it got closed in a door by accident or something and he had to jerk through?

I am asking cat owners advice tonight too with Darius's new back problems.

A tail is a most important part of a cat's communication process! Your photos show signs of healing! Yippeee!

I am so glad that Arthur is getting back to normal, even though his tail is still limp.

I was very impressed with Mr. Gattino's cord. What a wonderful idea! I expect that Arthur is very happy to be back outside without leash or cord however.

Please keep us updated on his progress. People the world over are concerned for his health!

We all have our tail troubles. Lydia published a picture of mine that makes me look fat!

Please forgive my young colleague. He is still very young. Arthur, I extend my sympathies and wish your tail a speedy recovery! We have something in common; I too very much dislike having my tail folded, etcetera. I hope your tail is soon back to its usual catlike flexibility!

Eeeew, I totally hate it when anything happens to my tail. Glad you're feeling better, Arthur, because, like, you are a role model for me. I want to be a Eurocat someday.

I am glad Arthur is feeling better. He really gets into trouble doesn't he.

We had a blue-point Siamese who was very large. She was staying at my in-laws house while we moved and she went behind their washing machine. She got stuck and couldn't get out but they didn't hear her call. So she bit a hole in the water hoses and they saw the water running out and found her. Her tail was crimped and in a few days the hair started falling out and her tail was dead. The vet had to cut her tail off and she had a tiny two inch stub left. But she was very agile, had good balance and could still express her feelings by whipping that stub around.

Poor Arthur !!! Sorry I was for a long time not here. I was too busy for Blogging. But I would like to read the other posts.
Gattina ,tut mir leid, aber ich war zu beschäftigt hier in der Familie. Ich werde aber alles noch nachlesen, ok ?
Einen schönen Dienstag !!!

Poor Arthur! I am glad that you are feeling better, but I hope you get the feeling back in your tail, and don't need to have it cut off! If you do, though, you'll look like a Manx!

How are you liking your harness and leash, Arthur? I'm only allowed outside either on my harness, or in my stroller. So I think you are very brave to go outside alone all the time! That wouldn't be very safe around here.

Oh Arthur, what happened to you? I hope you don't lose your beautiful tail...then you would be a Manx cat. I hope your tail gets better soon, Arthur, so you don't have to go to hospital and be "de-tailed".

Gattina I always forget that these links are to whatever article I posted last rather than to the current one. The second damozel link (and this) will take you to Cats on Tuesday. This happened last week as well. I keep forgetting to fix it.

Poor Arthur. He really does seem to get into lots of trouble! Oh at such a painful cost!

I am so glad he is off and running again!

It is wonderful that Arthur is feeling better!

Poor Arthur. And I did not know. It's hard to be without Internet connection. Becomes so isolated.

I do not have experiences with cat tail problems - we have Manx you know.

But I'm sure Arthur soon will recover.

Poor baby. I have had several cats get their tail broken. Depending on where the actual break is determines how well they hold their tail up. He should be able to keep his tail. If it needed to be removed it would already be yucky by now. I had one cat break his at the base. After a few years he was able to hold it out straight agin but never high in the air. His balance was affected at first but improved over time.

I am so glad that Arthur. What happened to his tail? Poor baby. I certainly hope that he does not have to have his tail removed.

Yes, please add me to the Cats on Tuesday Blogroll. Thank you! :o)

ah - poor Arthur - such a dilema to face. Our cat had the end of her tail bitten off by a fox. Hopefully no such mishaps will befall our new cat (who is called Dixie and will be collected as soon as I can get a chance... Saturday at the latest!)

Oh Poor Arthur! What a time he has had.
My little Wikipedia wants to go outside all the time and can be quite loud about it.
When she does get outside she forgets she is scared to death of the great outdoors and will instantly become frantic and climb the screens to get back in.
Your Arthur is such a beautiful kitty!

I'm glad Authur is not in pain anymore. My mom's cat has a broken tail, bent around in a knot at the end. She's always worried he'll get it caught in something.
Authur is such a beautiful cat and I'm sure he'd look just as handsome, tail or tailess.

You've been tagged by me on my blog Blog-Blond to answer some questions. Hope you play along....you're so funny, I look forward to your answers!

so glad to hear that arthur is recovering from his mysterious ordeal. and how funny the "drunken sailor" bit while he was getting used to having no tail to help with his balance! (okay, not so funny for him, i'm sure)

i do wonder what happened. if it was that mean black cat then shame on him!

i hope he doesn't need to have the tail removal surgery but of course there are indeed plenty of cats who live quite happily with little or no tails at all. (i suppose if you're born without a tail you're already used to it and don't have the drunken sailor problem)

i'll be eager to watch his recovery...at least now he can wander around a bit without mr. gattino attached to him all the time!

My bruddy HGL has a bobbed tail, but he's a natural bob. The cat that came before my oldest bruddy Punkin, he broke his tail real close to the base and had to have it removed. He was young at the time and it affected his balance for the rest of his life.