Have you ever been knocked out by your cat ? This happened (nearly) to me yesterday evening. I peacefully watched a murder at TV and suddenly heard a long awful complain behind me which came out of the depth of Arthur's chest. He had spotted his enemy the black cat with the big head who had dared to enter the living room !

Before I could turn my head to see what happened and eventually get up and chase the intruder away, I got a hit on my head, the TV switched off alone, I heard water splashing on the ground and saw 3 shadows disappearing in all directions.

I gathered my spirits and rubbed my head and then saw what all had happened in one second. Pookie, who napped on the sofa back behind me, had jumped on my head, and catapulted herself by putting a paw on my nose somewhere into the living room.

Kim who was peacefully sleeping on the dining table had got up and kicked over the vase which was full of water. Arthur who was watching his enemy from a chair under the table had knocked it down and was invisible. Only Lisa hadn't attented this event.

Our living room looked like a battle field. The vase lay just at the border of the table. A big puddle had formed on the floor, two chairs were also laying down. The remote control had disappeared, I found it later under the sofa and I sat dazzeled there and wondered what had happened to my head, nose and me in general.

Mr. Gattino took the events in his hands. First he sweared, chased the black intruder outside, stepped in the puddle and got wet feet (which increased his vocabulary) He picked up the flowers, throw them in the vase (I had to arrange it later) picked up the chairs and comforted his little Arthur who sat there with huge eyes transformed into a pillar of ice.

Today the carpet is still wet, but the cats are fine. 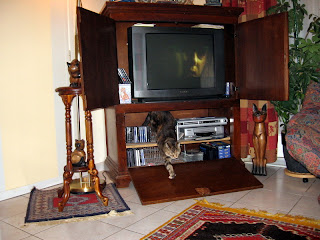 Pookie checked why the TV is not working anymore 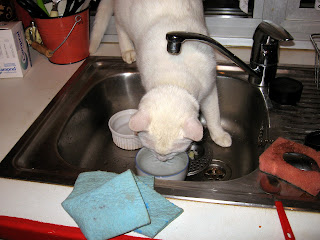 Arthur to recover needs a glass of water !

LOL! It's crazy what cats will do in an instant. I loved it, but I'm sure you didn't.

OMG, what a kerfuffle !! Hope everyone and everything has recovered !!
By the way, Rosel is beautiful. Bet you can't wait to get her home.
Have a wonderful week.
Take care, Meow

Sounds pretty typical of cats, doesn't it. I thought it was hilarious but I'm glad you weren't too badly injured and that the cats are okay. That big black cat has got a lot of cheek, hasn't he?

Poor Arthur...I hope he gets over the trauma of having his space invaded by his enemy.

Wow, Arthur, you had quite the adventure!

I will be happy to host Cats on Tuesday next week. :)

Ha ha, the battle field without a battle :-)

Things can happen very sudden when being around animals.... and they can looks as surprised as we can of what happened!

oh my goodness! that black cat is certainly some sort of demon, alright.

i've been used as a launching pad by Emma before (she has feet made of concrete, lol) and it isn't pleasant...once she was frightened and left deep, bloody scratches in my legs as she flew into space from my lap. i can only imagine your poor head and nose!