Saturday my friend visited us together with her 3 year old grand daughter and was of course very intrigued by the cats ! She has a big dog at home, but cats she only had seen in Kindergarten on pictures. Now I don't have to explain how 3 year olds behave when they are happy and want to touch an animal. It doesn't work without noise of course.

Pookie and Kim got hysterical and disappeared to all points of the compass. Lisa just had a bored look on this strange mini human and vanished too. But Arthur stayed. He apparently loves children and probably had never had a bad experience either. It looked like if he had met her everyday. 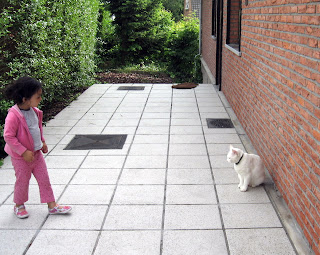 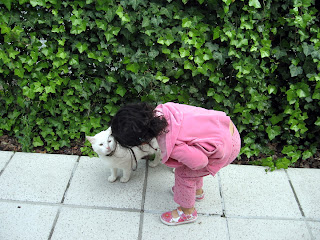 Arthur wonders who it is, never saw this mini human and 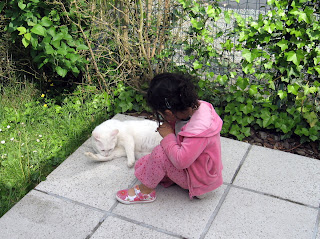 lay down to wash. Of course what else. Cats when they don't know how to behave they wash and think it over. It's more esthetic then digging with a finger in a nose and think ! 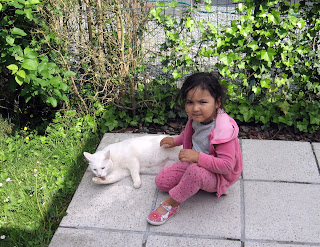 That mini human is OK he thought 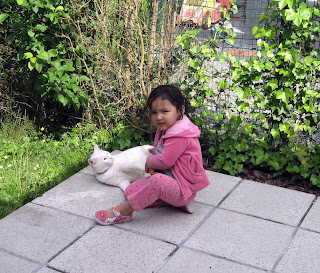 and asked her why she stopped petting him ! 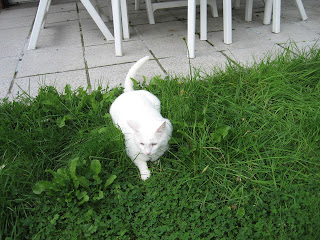 Finally as nothing new came up, he strolled away. But not very far, he even came back and followed her in the house. Do your cats behave like that with a 3 year old ?

As he is always tracking the neighborhood he must have met a lot of kids and because he is not afraid of them he apparently only had met nice once !

The rest of the cat family only showed up when there were no strange sounds around anymore.

The Unplugged mom has reminded me that we all have to do something for PEACE in the world. Maybe if politicians don't listen to people they may listen to their cats if they have any. Usually they are more "dog" because a cat is too independent and wouldn't do what they want ! so please lets all together Blog Blast For Peace and read this from Mimi's Blog !

There is something especially endearing about a cat who is good with children, and Arthur truly is a good example of that.

As for my cats with children, Silver and Stevie run away and hide but Socks is very social and will stay around them and interact with them. That's one of her most precious traits, in my mind.

Tigger will let Mom's granddaughter pet him. I mostly hide. I am not sure about the mini humans. They move to fast. We just joined Cats on Tuesday. We'll do our first one tomorrow. So nice to meet you and your cats.
Have a terrific Tuesday,
Be blessed,
Samantha & Tigger

Arthur seems like such a nice kitty! All my cats love my two oldest children (ages 4 and 6) because they are gentle, having grown up around cats.

However, five of my six cats run wild-eyed from the room when my 16 month-old tries to say "hello." 16 month-olds don't know what "gentle" means yet.

Nutmeg (the ornithologist) must be a real optimist because she is the only one who actually goes over to the baby and rubs against her saying "hi." She seems to soon forget if she gets a rough reply.

Arthur, always a gentleman! What lovely manners he has. So kind to all, even a mini-human, imagine that! I am so impressed by his adventures, he never ceases to amaze me, and of course entertain me with all his wonderful escapades.

My cats could certainly learn a lot from his good behaviour!

WOW, a little miniture purson...we've nevur seen one of those before. It's good to know that little mini people are nice and we should be nice back to them just like arthur is.

Your blog is sooo imformative!

Arthur, it looks like you made a new friend! :) I've never encountered any two-legged kittens myself, but you look like you are having fun!

hi
yes, that WAS my photo, my words, my creation

Arthur you are such a kind-hearted cat. I don't mind the baby, he doesn't know any better and after, he has to learn. But older kids who torment and tease me...nuh uh, I go and hide from those little devils.

Glad you had a nice day, Arthur. Actually, she's rather a cute kid!

A 3 year old kids means invisible cats for hours. May be Rosa can be very curious after an hour or so, but Felicia. Nope. She hides.
It's seems like, larger males cats are less afraid of kids, than females. Maybe females do know more about kids and their behaviour than males?.

What a wonderful experience - children & cats! Arthur is a very sociable kitty, got to know what's going on! LOL

How is Arthur's tail healing? Will they need to remove it? I do hope not!

Awww how cute! Out of the 3 cats I have had since my grown up years, only Miss Lulu is a kid friendly kitty. My other 2 wanted nothing to do with kids.

Have a great Tuesday!

Authur is so good! We are having a sad day here.

I think it is a very endearing quality that Arthur posses. You are lucky. My boy used to let the neighbors grandson pet him for hours but that was the only one, and that was a long time ago.

I tried to copy your blog roll but Typepad didn't work with that. Soon I will try to make my own side bar Cats list but it will take me some time getting all of us in there! I'm sure there is a way to just use your info but I can't figure it out.

Arthur's tail looks like it's getting better in that last picture.

Arthur has very good manners, doesn't he? I'm afraid that my Aloysius is very shy with strangers.

Arthur is such a loving cat! Mine is now up--Anela surprises us!

Stopping by to see the banner. I had a referral from your site today. Keep up the good work!

Arthur is a cool cat, no doubt about that. He is very much alike another cat I've met in my life: a former neighbours, butt that was a she and looked very much like Pookie! Funny huh? With that brownish spot she has in the forehead too!

Gretchen adores every human that walks through the door. She's suddenly found a long lost freind in each, until a child came to visit. She stayed out reach of mini hands, but just enough to tease the little girl. Good job Arthur. You're a good soul.

Oh Arthur you are such a good kitty!
My Alex cat is good natured like that. He loves everyone he meets and gives kisses too.
I am going to write about him next week!
I just love tuesdays now and can't wait to get home and read everyones cat posts.
Today was a verrrry long day and I had to wait until now to relax and read and comment on all the cat stories.
What a nice way to end my hectic day.
Thank you for starting this group.
>'.'<

Arthur is a very nice cat. I like your photos !
I have very busy days and could not write yesterday, sorry.
Ich hoffe du bist nicht böse, aber ich hab so viel zu tun zur Zeit .
Have a nice day :-)