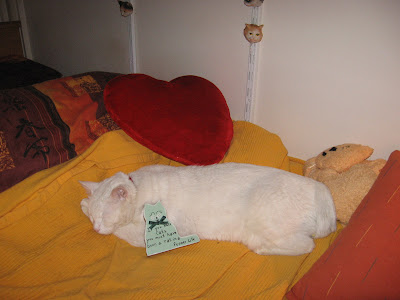 I think we should do something that "CATS ON TUESDAY" group keeps up its quality and not quantity.

There are some people "playing" without being member just by putting in letters "Cats on Tuesday "on top of their post, not even with a logo and of course nothing in sidebars either.

We started with 7 and now we are 25, but sometimes I counted until 36 in Mr. Linky ! If we want to be able to read the posts of other members, only people who intend to play this on quite regulary basis should be admitted.

So I did some new logo propostions, maybe not all of you love a toilet ! This new logo has to be put in your sidebar just like for other groups. On each post on tuesdays has to be either the little cat on the toilet logo or one of the others showing us that you are "in".

I took one member out for this reason : Since she became mother of a little son, she forgot her cat completely. Her blog was only about her cat now it's only about the baby. I am not even sure if she still has her cat. I am sorry, but people like that don't belong in our group. We are probably all mothers or fathers and didn't drop our animals just because now it became useless ! An animal, in this case a cat, is not an object to be thrown away, just because the person has other interests now. I have asked several times about the cat (the baby is now about 3 months old) without success and in her posts the cat is not mentioned once ever since.

I also took out some people who only played one or two times since the creation of the group and don't have a logo in their sidebar.

Of course I can understand that some of you just can't, don't have time, or are not feeling well to participate, but until now I always have been informed when it happened. I think you agree that our group doesn't become a Wordless Wednesday or a Thursday Thirteen, just rushing and catching for comments without even reading.

And a note for those who are on "comment hunting" for business purposes ONLY, taking a cat as an excuse : THIS PLACE IS NOT FOR YOU.

If you don't like the above then you can choose between : 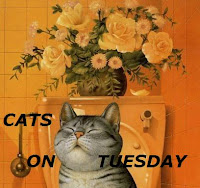 Hi Ingrid,
I understand what you are saying !!
I'm glad you haven't removed me from your list, but I sure am sorry I haven't participated in a few weeks. I will again, hopefully this week. Time has been getting away from me, and Tuesdays haven't always been successful for me to post, as I have been working and haven't had a lot of blogging time.
Hope you are well.
How's Arthur's tail ???
Take care, Meow

Any of those logos would be fine with me. Personally, I kind of like the original cat on the toilet.

Let us know if there is anything else to be done. (I have the blogroll with Cats On Tuesday label in my sidebar and cat on toilet picture on every post).

Thanks for taking the time to organize this for everyone Gattina! I hope Arthur is feeling better.

I stopped by to see how Authur was doing and read this post. Because I am new, and my daughter (Paula-Basset Knitter) has set things up for me, I want to be doing things right. I just learned last week to ad the little Cats on Tuesday sign, so I should use the cat on the toilet instead? Also, tell me if my post are not right. My daughter had explained when she signed me up that we wrote cat stories on Tuesday. This was was exciting to me, and I like writing about Gretchen. We live in a rather small world, her and I, and sometimes a faciful one. I like to right fiction, but my stories are always based on a real event. If this is not a good thing, please let me know. I really like this group and want to stay in it.

Oh I like the new buttons!
I liked the kitty on the toilet on too! He was my favorite because he reminds me of the cat who owns the main character in the burglar who series. His cats uses the toilet instead of the sand box and he is always trying to teach the kitty to flush! ;)

Gattina, I don't put any of the meme logos in my sidebar - there's already a lot of stuff there, and I don't want to add more. I do always put the "Cats on Tuesday" small button on each of my Tuesday posts, and I make an effort to visit as many people as I can on Tuesday, and leave try to leave thoughtful comments.

I don't like putting the logos in my sidebar either... do you really mind? I was gonna start playing again now I have a cat again but I'm happy not to if you prefer. You had a Cats on Tuesday banner that I copied when you started this off that I used instead of the toilet. I was just gonna use it again and have already posted this week but I'll pick one of these next time if I'm playing.

Just let me know either way!