Last sunday Arthur came home and looked strange, he walked like a drunken sailor and made noises like an old ghost in a castle something like ououou. I checked his hind legs but couldn't find anything. While I did that he growled but didn't do anything. Later I understood that this was his way to show that he had pains. 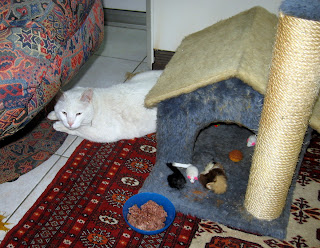 He settled besides the cat house and as he didn't move I brought him something to eat and he ate. I couldn't go to the vet because it was sunday. So there was nothing to do but wait until the next day. But while I was busy he suddenly disappeared.

I had never thought that he would be able to go out as he walked so badly. Now Mr. Gattino got in panic and looked (again) everywhere outside, checked all bushes, fields and neighbors, but Arthur had disappeared into thin air.

40 hours later I suddenly heard this ououou behind me in the kitchen. Arthur was back ! still walking like a drunken sailor and hungry like a lion. He emptied a whole big can of food and I was so relieved that he was back. I had already thought that he was laying somewhere and couldn't get home because of his bad leg.

All doors were closed immediately no way to escape anymore. As it was the 1st of May and a bank holiday no vet again, except the emergency service. But as he looked and ate well I thought I could wait for the next day.

First thing in the morning was calling our vet and announced an emergency. I could bring him over right away and 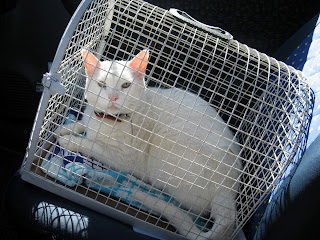 here you see Arthur in his cage in my car. He was very brave he didn't "sing" as usually, he said nothing. Only when I stopped talking with him, he started to growl again, so I told him about phone calls to make, unpaid invoices to pay and my friend's miseries and everything going through my mind non stop until we arrived at the vet.

After meticulous examination the vet pointed on that : 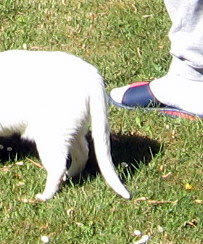 Arthurs tail ! It was completely dead. He felt nothing in it anymore. What he had done or what had be done to him remains a mistery. Diagnosis : Broken or squashed tail !

Now that was the reason why he walked so strangely, he had no balance anymore and had first to get used to the fact that his tail was useless. Otherwise he was in very good shape. But he had to get a shot against possible inflamation and other things, to heal the tail. If it's not OK in one month, it has to be cut off. Poor Arthur ! But I was almost relieved that it was not the leg or something else and "only" the tail. 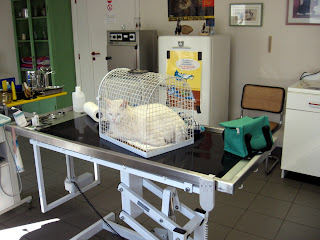 Here sits Arthur after the procedure and had been really a very good boy. 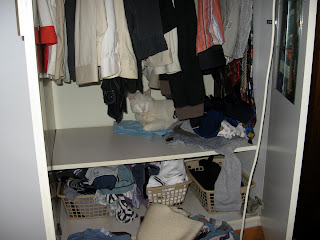 When we came home and I took him out of his cage, he walked already much better and disappeared again. I looked through the whole house and finally found him here in Mr. Gattino's wardrobe ! He had pulled out pajamas, socks and slips and had made himself a cosy little nest. There he rested for the rest of the day. 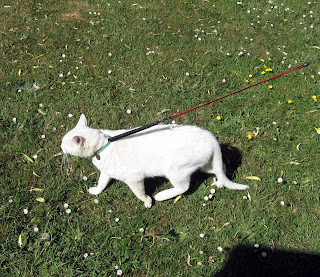 But then the next morning he wanted to go out and he meowed and growled and scratched every door, that finally Mr. Gattino put him an extendable leash on and went with him in the garden. 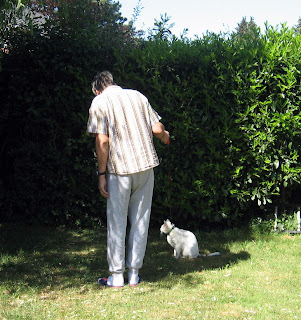 Mr. Gattino had blanc nerves with all these events and was more exhausted and sick then Arthur and when Arthur wanted to dig his little hole for his business and had some difficulties because the ground was so dry and hard, he asked me to bring him a little shovel to help digging ! At this moment I really thought this is the end and now he has become crazy ! 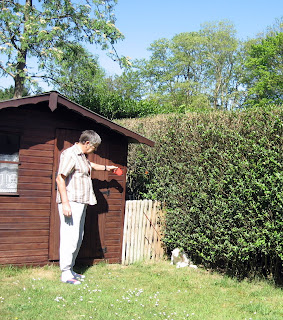 and did his washing up afterwards.

As the normal collar was not a good solution if we have to walk him everyday I went out to get a harness. 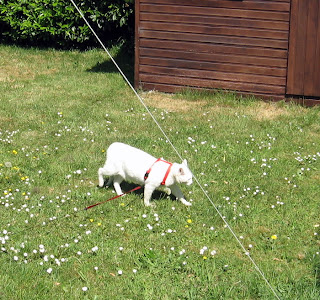 Arthur didn't complain at all about this at least to him very strange thing, as he had never worn one before. But there was no problem he didn't get crazy or hysterical, he just walked around as if he had done that his whole life. 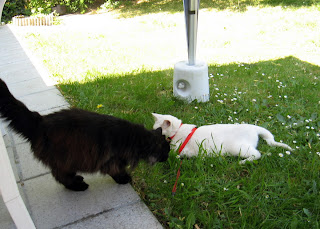 Of course Kim had to check the harness too. 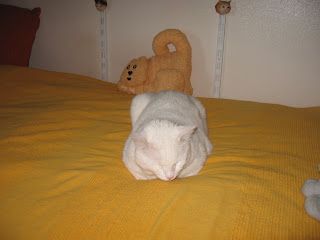 And then after this rough day, he finally could sleep in peace.

What I think more and more is that he had been bitten by the black very aggressive cat who is new in the neighborhood and with whom Arthur already had some fights.

Now we have to wait how it will continue.

He was really trying to tell you about his broken tail, didn't he? Talking to his Mom ;-)

How wonderful that he is accepting the leash that easy!!!!

That is a wonderful cat. My fave as you know. I hope he heals faaast.

I'm sure that you (and Mr Gattino!) is taking very good special care of him now, so he enjoys his time anyway!

Give him a good scratch under his chin from me :-)

Poor Arthur!I really hope he is better now. Arthur is really clever now , maybe he understands you are helping him.
Get well Arthur!

ok ... now i wanna say dat dere wuz a cat wid a problum tail in dis howse ... but all tailz seem to be in good shape now ... so i hav mi pawz crossed dat arthur'z tail will be ok.
an i think dat mr. gattino will be ok, too.
luv--yer grate frend--jh

Oh Gattina,
I really hope Arthur is OK. Poor Arthur! I feel like I know him personally from all your wonderful stories. Get well soon Arthur!

Poor Arthur! I hope his tail heals up really fast. It's amazing how quickly he took to his new harness.

We hope that Arthur's tail recovers. It is very good that you took him to the doctor and that Arthur got the injection. We are hoping he is well soon.
Get well Arthur!!

Gosh, Ingrid, I hope Arthur's tail recovers. Poor thing. I can't believe how quickly he adapted to his harness ... my Bambi would fight it. Obviously Arthur knows you are trying to help him.
Good luck, big hugs to Arthur.
Take care, Meow

Oh Arthur, how on Earth could I have missed this entry?! You poor, sweet boy! You are one of my favorite kitties and I hope things work out well for you!