A PART OF ARTHUR'S LIFESTYLE 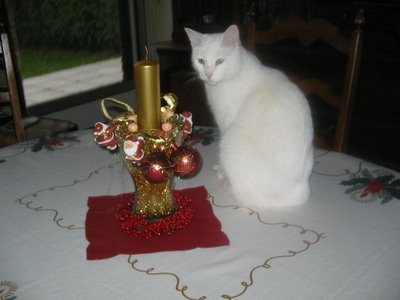 Arthur the only male cat in our cat family likes Christmas time very much. There are so many things showing up suddenly that he almost forgot to make his dayly check up visits to our neighbors.

He actively helped me to pull out especial tiny Christmas decorations, like little Father Christmas, angels and red little baubles. Then he sat there looking at all this with a disdained glance turned a little Father Christmas around and touched him with his paw as this strange mouse didn't move. He sniffed at the white cotton beard, sneezed turned around and walked proudly (tail up) away, this would be work for later.

When I looked out of the window, I saw him on our street sitting on a neighbor's car and watching out for somebody to walk or talk with.

Yes, Arthur is a very social cat and a real crooner ! He loves to charm people on the street and very often I can hear "ah what a beautiful cat" "isn't he cute" and other ah's and oh's. Then Arthur flattered, would put himself in position and just look cute.

Yesterday the door bell rang. I opened the door and saw a man in a blue uniform, he was from the Electricity company and wanted to see our counter. And who was sitting besides him ? Arthur of course. I let the man in still escorted by Arthur and all three of us went to the basement for the counter.

The man looked anxiously at this white cat and asked me if he scratched. I took my most offended face and told him of course not ! Arthur savoured the situation and prowled around the poor man's legs. The man while looking at the counter and quickly wrote down the numbers he saw, step danced around to get rid of this attaching cat. Then he quickly said good bye and escaped in a hurry .... still followed by Arthur. When I looked again, I saw him going from door to door and who was following him with eagerness , still tail up ? Arthur of course. 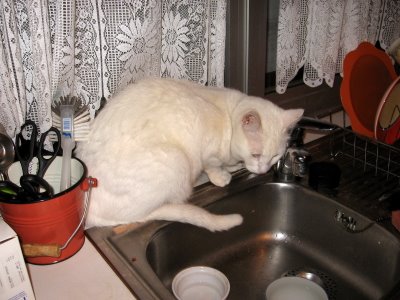 When Arthur is not busy to get on the nerves of all people in the street, he looks for new occupations in the house.

I have to say that Arthur is a very curious and active cat when he is not sleeping !

Here after 5 years (already) he discovered that we have a sink in the kitchen. Now, every day I have to let the water run, because Mr. Arthur doesn't drink anymore out of his bowl ! It's much more interesting to play first and drink after !

Unfortunately I am afraid that our water bill will consequently be a little higher this year ! Unless I only take a shower once a week !

After one or two hours of activity depending on the weather, he then decides to nap. When the weather is bad then he would first try to play with Pookie (Kim doesn't know what playing is and looks at him with astonished eyes, and Lisa the old Lady just chases him away. For these games she decided, she is really too old. She only deigns to play with us. Pookie like an annoyed mother would play a little but just to keep peace and then chases him away too.

Poor Arthur what a hard life !

It would be helpful for me if you leave your email here in the notify list.

Arthur sounds so friendly and sociable! We'd love to play with him. purrrrrrrs!

I have to say that Arthur is certainly right to like Christmas... it's a great time for cats.

Kandi has been exploring my front room this evening as we've changed the layout in anticipation of tomorrow's Christmas tree decorating fiesta. She hasn't seemed very impressed so far.

Have a great day!

Arthur sounds like a wonderful cat ... but then, aren't they all !!
My Cats On Tuesday is up (finally) ... I even got the Mister Linky thingy to work !!!
Have a great week.
Take care, Meow

Arthur sounds like he thinks he is a dog. The funny thing is that I have met people that are so frightened of a small cat, they will not go in a room with them. Bless their hearts, they miss out on so much.

Arthur seems to be a funny cat, and he really likes people`s company.
My "cats on tuesday" is up.

Arthur is so cute! :) He sounds like a real "people cat" - my Whiskers was the same way, he loved following people around (although he was an indoor cat only), and Dragonheart is looking to be very similar.

A lot of cats seem to enjoy drinking from the faucet. You are right - it can cause the water bill to be significantly higher!

Arthur is such a charming fellow. Him and my Callie would get along great! She has the same spirit he does. Only she does not like to go outside but does sit in the front window and wave at the cars and critters! I posted about my Annie Cat today!

Hi Gattina, Tried to join Cats on Tuesday, it would appear that I did not go about it the correct way. I should have waited until I had someone to help me with it. Cheers Margaret

My post this week is about my kitty and our kitchen sink too!! Aren't cats funny?? I love reading about the many advenuters of you kitties!

Have a great Tuesday.

Hi, I just wrote my first Cats on Tuesday post this week (well, my cat did!!) It's just an introduction to him and a few photos. I couldn't figure out how to post my link in your Mr. Linky and have not gotten Mr. Linky on my blog yet but I just thought you'd like to know that I decided to join you :)

Gattina so enjoyed your cat blog

Unknown said...
This comment has been removed by a blog administrator.
3:56 PM

Gattina I can´t put the cats on tuesday sorry the next time.
Mom will be operated on Monday December 11 of a quister in the stomach,she will be seven days in the hospital. Dad will take care of me and I will take care of him.

Ha! I got through on the link from the email. The cats in my photos are my daughters cats. I have a white cat just like yours back in Hawaii that looks just like yours. My niece has her now.

Thanks for stopping by.

Arthur is a beautiful pussy cat :)

Anonymous said...
This comment has been removed by a blog administrator.
7:21 AM

I posted a Cats On Tuesday post. Of course it's cats 7 days a week at my house.

hahaha....Gattina, I have a tummy ache reading your antics. In this frozen time, I guess it is justifiable if you can make a lil sacrifice to accommodate Arthur's whim by letting the tap endlessly drip so he can have so much fun in the sink. That's what Jassie does in my daughter's kitchen. And he's a male cat too. Lemmy doesn't do that. Enjoy your Cat meme very much though sometimes I just come like a car doing a hit and run.

It's Cats: My Halle's Crown for me.

What an aristocratic feline, Arthur is...I don't trust people that don't like cats, my mother used to say, they were rats in former lives. I mean Arthur sounds like a true ambassador! Hmmmmph, is all I can say for the utility man!