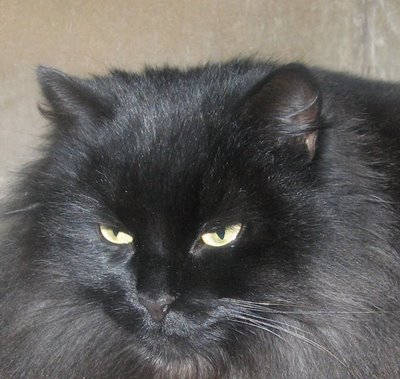 Today I want to talk about Kim, because I never really talked about her. Unfortunately there is not much to say. Kim is a beauty, nobody would contest it but she is a very strange cat. If I wouldn't know where she is coming from and even have seen her when she were two days old, I would have been sure that she was mishandled when she were a kitten.

But Kim was born as a Christmas cat in 1999 on Dec 23 in the house of my English girl friend in London. When our son saw this cute little black fur ball, he immediately wanted to adopt her. And that's what he did. When Kim were 2 month old, he brought her in his house.

Kim only saw Pookie and Pookie took the little fur ball to her heart and warm belly and from that day on, Kim follows Pookie everywhere and can't exist alone. Pookie defends her and Kim who is much bigger than Pookie hides behind the little motherly cat. Kim is very big. 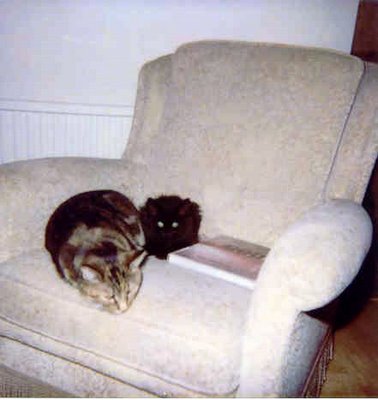 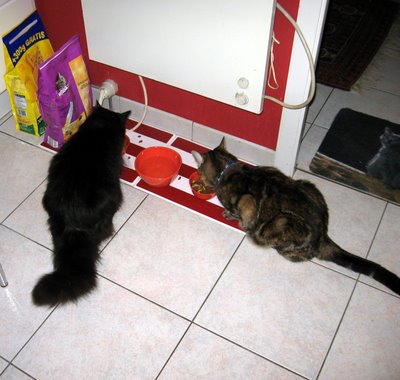 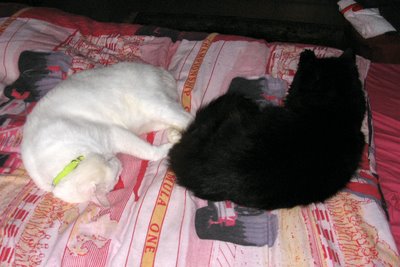 And here with Arthur

From the very beginning Kim didn't play as normally little kitten do. The nicest cat toys, strings, paper and foil balls, she just looked at it with big eyes and hid behind Pookie. Only when Pookie started to play, then Kim tried to imitate her. Our son didn't know anymore what to do with this strangely behaving cat. From the vet side, she was in a very good health.

When she arrived in our home, because our son had to go to Amsterdam and couldn't keep his cats, it took almost 4 years until she finally accepted to be approached. It's only since this year in spring that she started to come closer and even let pet her.

It was quite a drama with her long hairs, as it was impossible to catch and brush her and twice I had to go to the vet to get her shaved because of the many knots she had in her fur.

So Kim leads a quite life. She loves her fellow cats and especially Arthur (besides her beloved Pookie of course).

She often sits or sleeps in the garden which is her favourite place, in summer, winter, heat or cold or rain.

All cats in the neighborhood accept Kim without any problem. It's just as if she didn't exist. Even the dogs don't get crazy when she sits in all her beauty on our little wall and observes the street.

Poor Arthur has given up to play with her. He is fat up to danse around her and get her play.

The only thing she does and she is the only one in the group, she talks ! and a lot ! She would sit somewhere inside the house and meauwing without any reason. Just like that. A whole conversation all to herself this can last for half an hour, several times a day. And it doesn't sound like a complaint, it sounds more like a happy monologue. She cannot purr either. When you pet her you can feel under her chin some vibrations but no sound comes out. And of course if there are visitors, Kim disappears until every stranger has disappeared.

During the first two years she lived with us, when our son came for a visit, she were hiding the whole time he were there. Afterwards we realized that she were afraid that he would take her back, because now when he comes he is even allowed to pet her.

So of course we accept as she is, a beautiful, quite almost non existing cat who never ever broke something or behaved badly. Fact which is compensated largely by her cat family !

Has any of you cat lovers ever had such a strange cat ?

our Lady's mom had a big fluffy Maine Coon kitty who acted just like that, but he was mistreated as a kitten. we love Kim - she's very beautiful.

Well, my sister Ninna sounds a bit like that - when Mom tells people they have 3 cats, people ask, "Where's the other one?"

Kim's beautiful, though, and it sounds like has a wonderful understanding home.

Your Kim is a beautiful girl! She looks a lot like my Gracie.

Enjoyed all your pictures!

I loved to read about your beautiful black cat. They really have their own personality. I do also have problems with brushing my long haired cats.They don`t like it!

Hi Gattina - no my cat is nowhere near as strange.. but she does like to sit and chat to herself now and then.

Kim sounds lovely & looks very like our old cat Oscar did.. he had MANY relatives so you never know.

aww, Kim sounds like a sweet shy thing. She is quite a beauty, isn't she?
Our fluffy black cat, Tas, is shy around all strangers, .. and sometimes us, when we are outside. And he is terrified of children. He too is a very large cat. Fortunately, he loves being combed and brushed!