Arthur looses his hair so much that sometimes I think it had snowed in the house. Wherever he goes or sits or sleeps he leaves white hair. Fed up I told Mr. G. to buy a special brush for cats. I had one, but couldn't find it as my cats are rather brush hostile.

He came back with a comb for dogs ! I told him that he didn't even need to read because there were two big dog heads on the package. He pretended that fur is fur. So I had to go back and swapped the comb into a cat brush. 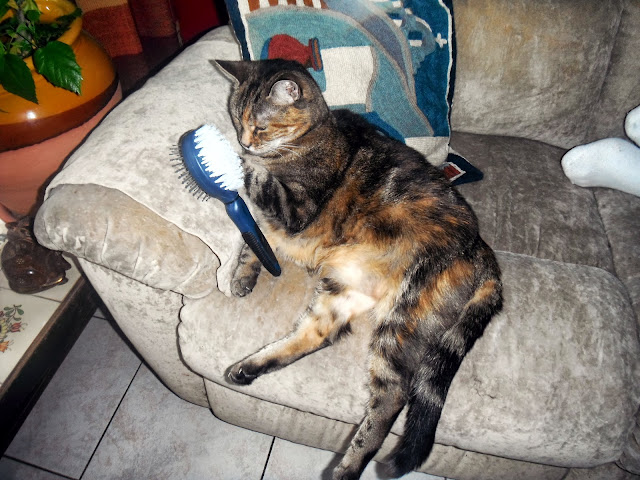 I first tried it with Pookie. She was very suspicious about this thing, but then when I brushed her softly, she got used and purred but suddenly had enough and hissed at me ! 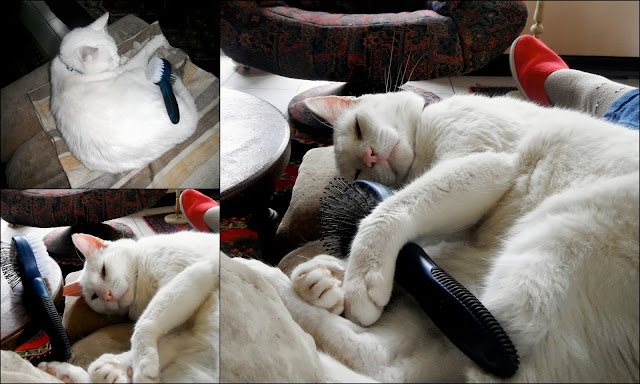 Arthur too, was very distrustful, let me brush him for a minute, then he slapped at me, took the brush out of my hand and kept it between his paws. No way to get it out of there, without being scratched !
Ungrateful cats ! Rosie didn't bother, but there was nothing to brush either. 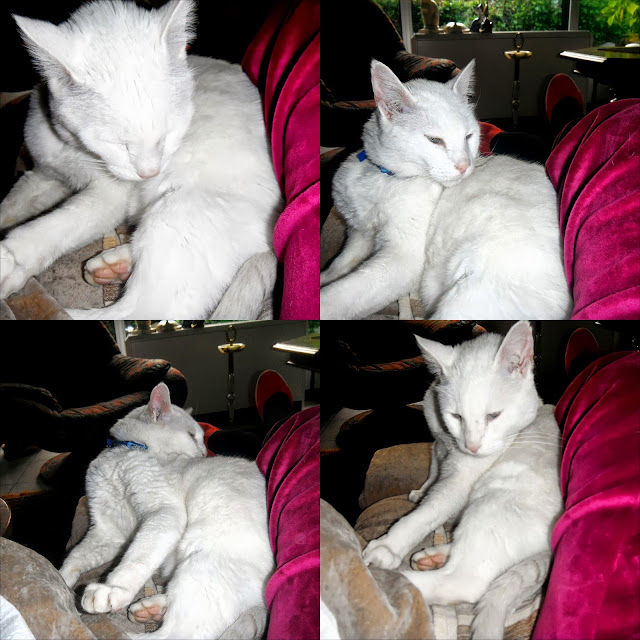 Arthur told me clearly that he prefers to groom himself and without brush ! 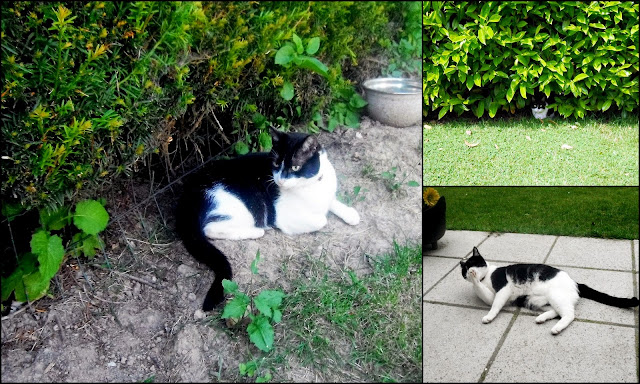 Rosie after having waited for a while had caught a mouse and brought it in the living room, while we were watching TV. Mr. G. creaked out of his sofa and tried to save the mouse without success. She escaped into the garden and the last thing Mr. G. saw from the mouse was her tail, just disappearing in Rosie's mouth. As you can see, she was very satisfied with herself. 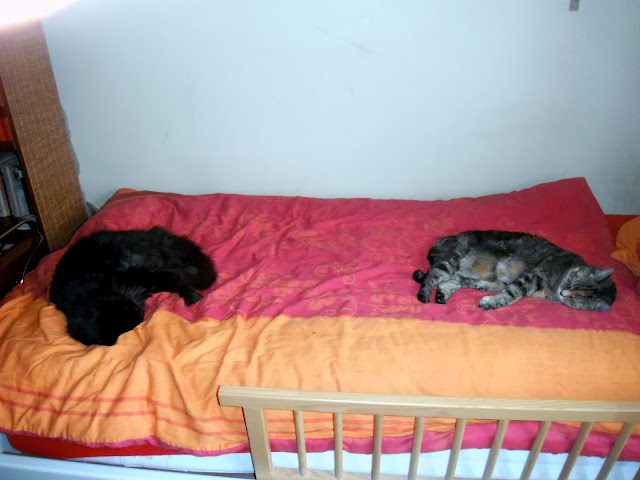 From an outside cat, Kim since a few months changed into an inside cat ! I first thought it was because of the cold and rain, but now even when the sun is shining she prefers to stay on "her" bed. Maybe she is getting old, she will be 14 in December. Her character hasn't changed though, she still is very shy and runs away if you want to pet her.

I LOVE being brushed! My human sometimes uses it as a reward for letting her photograph me, except it has to be before, doing and after the photo shoot.

We loved being brushed but there are certain sensitive spots where we don't like the comb to touch. All of us have different sensitive spots. Perhaps Pookie and Arthur jumped up because of that.
We think you should not give up brushing. Purrs to you to continue brushing.

All the brushes and combs in the Kingdom will never be good enough to get rid of cat hairs, you need a magic wand for that.
Pookie and Kim really love Mr G's bed, I hope they share when he is ready for bed.

I LOVE to get combed and brushed !
When my mom come with my special towel and comb I come running miaowing :)
Have been a lot of raining over here too :(
Typical swedish summer say´s mom :)

I use the Furminator on our cats and they seem to like it.

Mommy uses the FURminator on us kitties (Whisky doesn't shed so the FURminator can't be used). We tolerate it long enough for Mommy to get rid of quite a lot of shedding fur. :)
Maybe now that Kim stays indoors, she won't mat so much. :D

Hannah likes being brushed until we comes across a knot and then it turns into a war! Lucy tolerates a little brushing but she doesn't really need it too much.
Luv Hannah and Lucy xx xx

I haven't tried brushing our kittens. When they're asleep I like to leave them in peace - and hopefully keep the house safe from further assaults!

I can see how a white cat would be a challenge for shedding. Luna always complains when I start to brush, but after that she likes it and starts purring.

We understand completely! Moosey does not like being brushed at all. He is like Arthur, and will swat our hand if we try to brush him.

One nice thing about Kim staying indoors is now you can keep an eye on her. :)

My Sweepy loves brushing but Babur does not. I wanted to brush Petrocelli (stray cat we feed) but he refuses to be touched.

I am sure in time your cats will enjoy your brushing time, Gattina ;-)

White cats are the worst about shedding. I'm not surprised Arthur doesn't like to be brushed ;)

We use one at the rescue with very tiny wire bristles. It is excellent for removing excess fur.

Dads friend has a thing called a furminator. Says it is really great. Since Rumpy is the only one with a shed issue Dad is holding off a while.