The weather was crazy this week ! Until wednesday it was very warm up til 20°C (68 F) and Arthur of course took the opportunity to watch the street from our front yard. 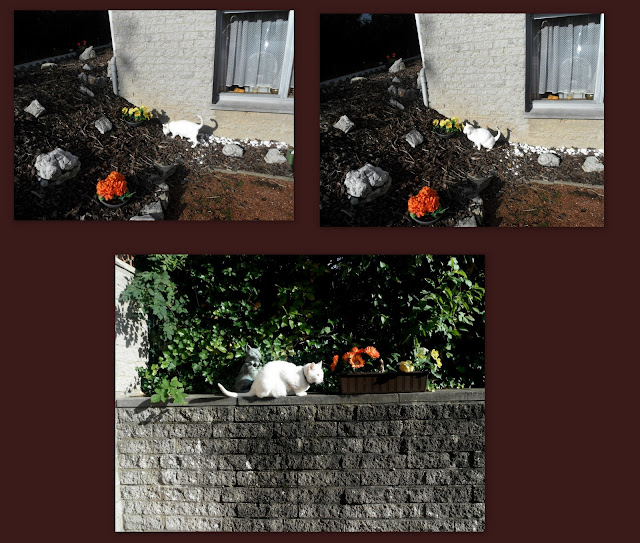 Noboy escapes him especially the dogs which he is nagging only by sitting like a little statue on the wall.

For the moment he is the only cat with some other activities then sleeping ! 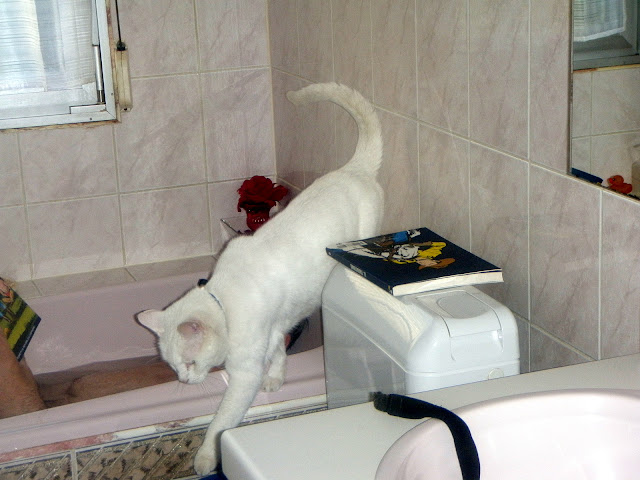 He watches over Mr. G taking a bath, 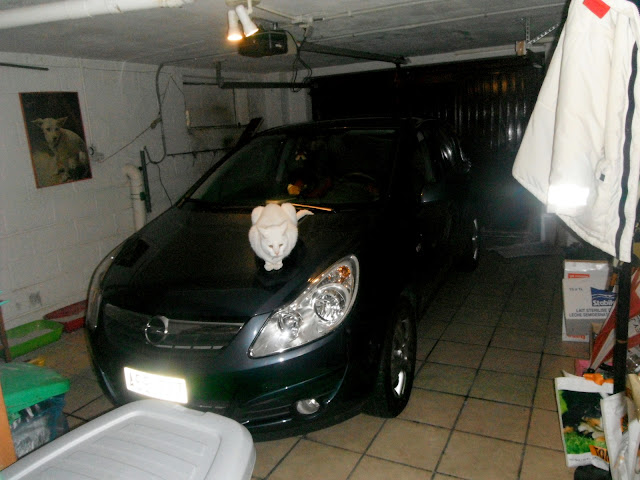 and keeps my car nicely decorated with paw prints.

Our living room became a dormitory, with Mr. G. included as he still has his eye infection and doesn't see very well, except the cats of course. 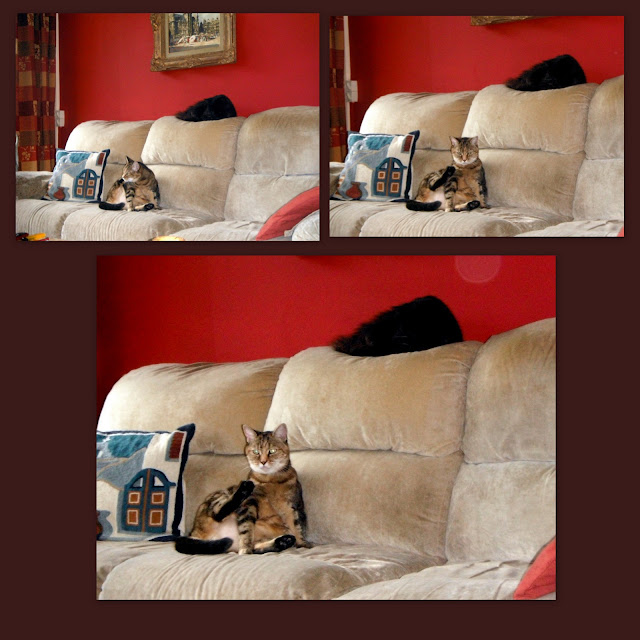 Kim has come back and is now always together with Pookie whom she still considers as her mother, although they didn't come from the same litter. Pookie stems from a pet shop in London and was bought by my son, while Kim one year later came from my friend's cat litter also from London. BTW they still meow in English together so that the others don't understand ! 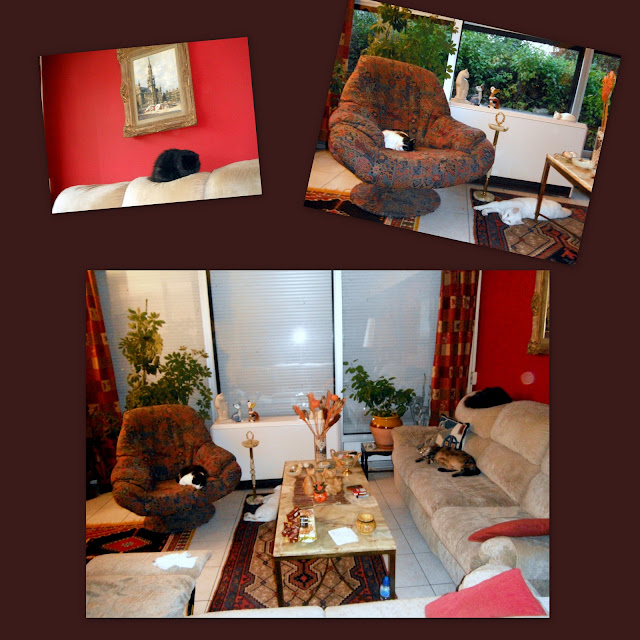 This was the view I had yesterday when I came back from shopping ! All cats united in the living room  dormitory. 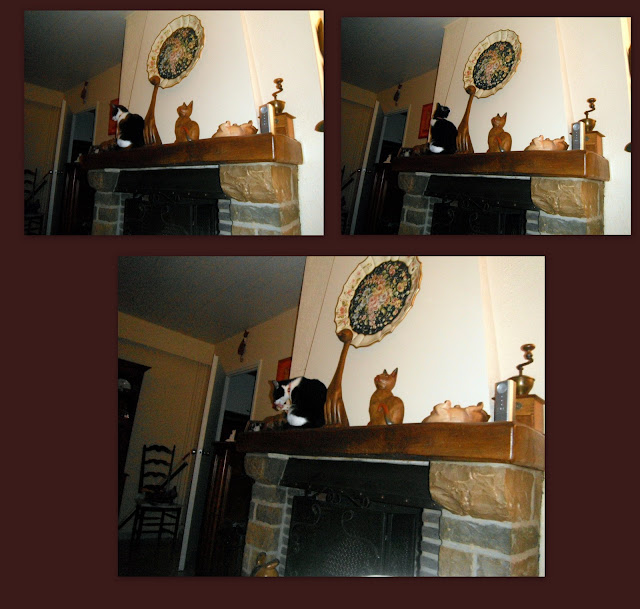 Rosie has her "flying cat" period and jumps on the mantel piece to groom ! So far she hasn't broken anything ! 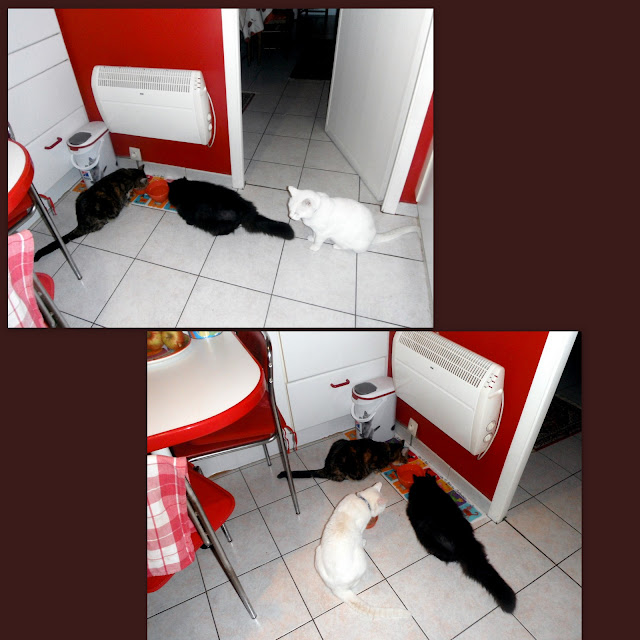 For once I managed to take a picture of the three eating together ! Usually they all eat at another time, Pookie her dry food during 24 h and Kim and Arthur like chicken, beef, or fish "mousse" which they eat in the morning !

Mr. G. had heard about a kleptomanical cat in California, and I found the corresponding video ! It is just unbelievable the cat had stolen about 600 (big) items over 3 years ! 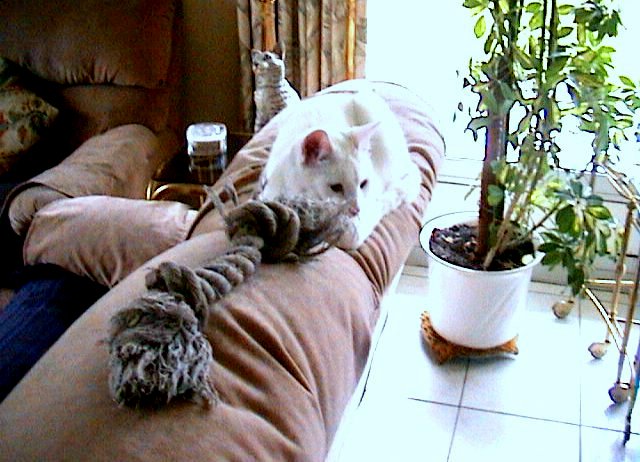 I remembered then that Arthur when he was about one or two also stole things ! Here he had carried this big cord bone from our neighbors dog through the cat flap into the living room !! Mr. G. of course thought it was me ! Another time he brought a whole French bread home, it was almost bigger than Arthur himself.

But what you can see here is just incredible !

Arthur's activity levels make me feel tired - such industry! Love the thought of Pookie and Kim miaowing in English - at least my lot would be able to understand them :O)
Arthur the kleptomaniac - LOL!
(Great video by the way).

I heard about that klepto kitty too - although we live in the same U.S. state, we aren't that close to each other. Which is just as well, I would not want that kitty stealing anything of mine!

We laughed when we saw Rosie grooming herself on the mantel piece - I am not showing that picture to Hannah and Lucy as they have enough places themselves without getting new ideas!
We are so pleased to see they get their food by the radiator so they can warm their paws at the same time!
Luv Hannah and Lucy xx xx

When the weather gets cold we all go in the living room to sleep too. That how the humans know it's getting cold outside.

Love that photo of Mr G with the kitties sleeping with him.
LOL! Arthur stole things? Do you have a picture of that French loaf Arthur stole?

Have been freezing cold here in south Sweden where we live too ( - 6 Celsicius).
LOVE the picture on Arthur with his trofé /cord bone :)
We have seen that video with the kleptomanial cat before , that cat sure is amasing !

Arthur is quite active. The weather there is not as crazy as it has been for friends and family back on the U.S. east coast.

That Arthur is quite a clown. I think white cats in particular have extra PURRsonality! Mommy looks like Mr. G in the morning--loaded with cats!

Love all the snuggly and gorgeous kitty pictures! I've seen the kleptocat video before, it's too funny! I can't believe your kitty dragged home that dogs rope! Wonder what the dog thought!!

Arthur, you kept very busy when the weather allowed! So nice to see you all inside (including Kim). Stay warm, friends!