CATS ON TUESDAY
Poor little Rosie started caughing on  Thursday and I thought maybe she had swallowed a hair. But as it continued through the weekend I preferred to take her to the vet. 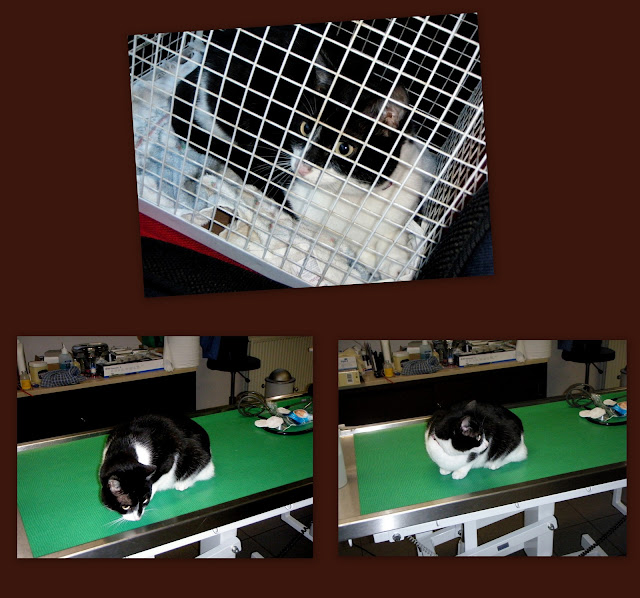 She was very good, but purred so loud that the vet couldn't check her breathing correctly. Apparently it was nothing serious she got a little shot for her cold, but otherwise she is in a very good health. 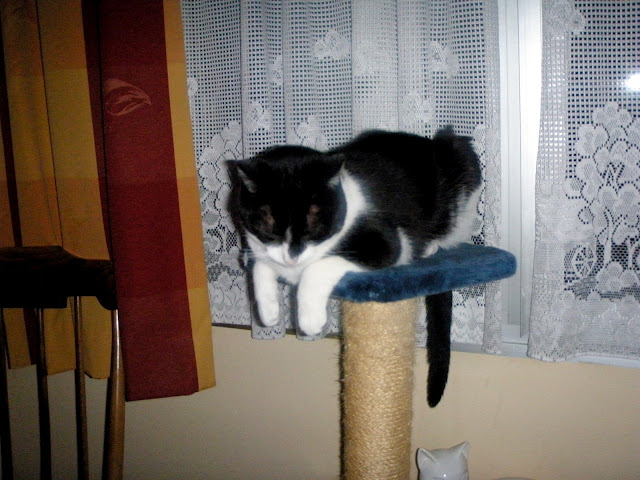 After that Rosie was exhausted, and I happy that it hadn't been something more serious. Now she is her old self and looks after mousies again.

Arthur also was hunting and decorated our entrance with a fat rat ! Fortunately dead. I wonder from where they are suddenly coming, we never had rats before ! The end is near ! 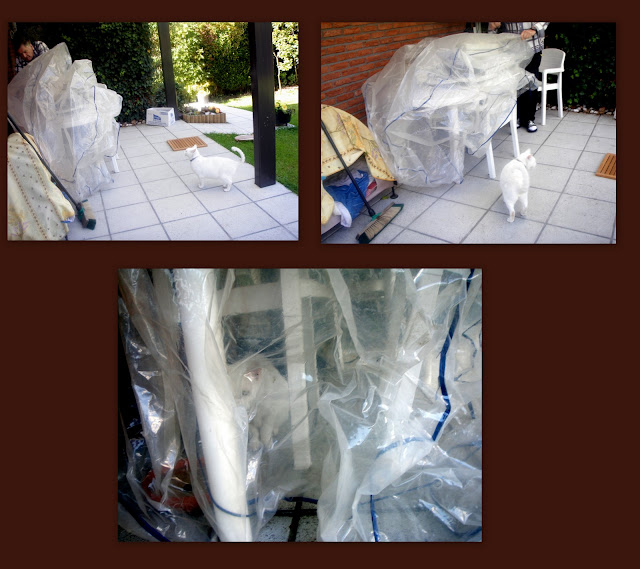 Now summer is over, although we didn't have any, and we had to put the garden furniture away which we had used exactly 6 times in the whole season ! Otherwise they stood there as decoration. Arthur helped especially with the plastic and then checked if the table was well covered and now rain could come in.

As Kim has moved inside again, I took an appointment for her at the groomer. To catch her and put her in the cage is a titanic work ! Although I had closed all doors, put on my shoes and my coat faking as if I would go shopping, she felt that there was something in the air and tried to escape through the stairs to the basement ! There I picked her up and she screemed like a sirene and ran straight in the cage. I just had to close the door but I felt exhausted. 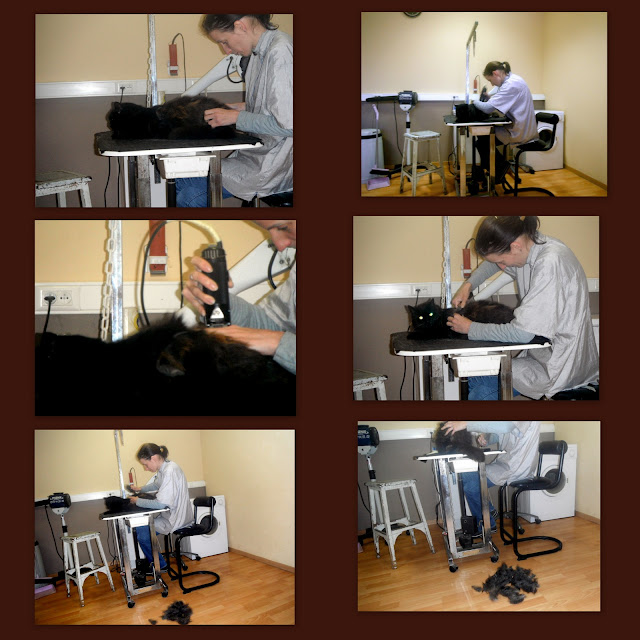 Then as usual she was the best cat ever, holding still, purred and made pasta on the table, I just can't believe it. When we try to brush her she runs away without even seeing the brush, she feels that we want to attempt something bad on her ! She is a very intelligent cat and has a special sense for feeling when something changes. 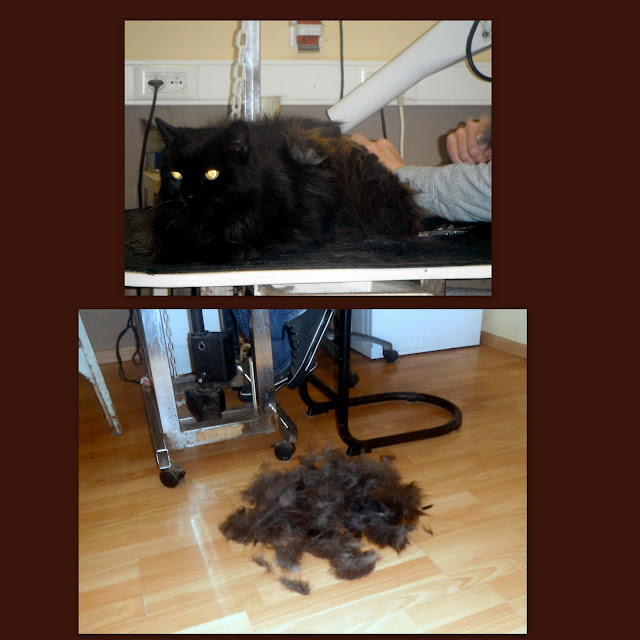 The result was this huge mountain of fur pieces and hairs and this in only 3 months ! If I could she would make some nice pullovers and scarfs ! Probably she had been a sheep in her former life !

When we came home she escaped immediately and hid in the garden and came only back during the night ! But now she is back to "normal", I mean as "normal" as she can be ! But when I want to sit down besides her she runs away !

That's so good that she doesn't mind being groomed. There was enough hair there to make another cat :) I've linked up so thanks for hosting. Deb

I am glad Rosie had nothing more than a small cold!

Glad Rosie is ok - what a good girl she is a the Vets! Kim is so... eccentric (!), all that fuss with you and yet look at her lying there being pampered like a show-cat. She is lovely though, I want to hug her (although she probably wouldn't let me) :O)

So so glad Rosie is doing just fine!
Big hugs to you all.

A busy week for you taking Rosie and Kim out for their appointments. A good thing Arthur was home to keep an eye on things and check on the rats while you were out. Pleased Rosie's cough is better. Pookie must have been asleep while all this was happening.

A busy and exhausting week for all the cats and especially for the poor humans !!

Oh, Rosie, this is Buster. I had to go to horrible doctor, too! I'm glad you are okay and you will not believe what they did to me, though! Good job on catching that rat, Arthur!

We thinks The Mum is exhausted just reading about all the exhausting things that happened. We're glad Rosie is okay.

Looks like it wasn't a fun week for the cats and appointments. Glad that Rosie is OK.

I've never seen such a calm cat when being groomed. WOW. Kitties never stop amazing me.

I wish all my kitty clients were so well behaved when I groom them!
We're so glad Rosie's doing well after the vet visit. Apparently, one way to stop a cat from purring long enough for the vet to listen to the heart is to turn on the water. This way, the cat stops purring to watch and listen to the water run into the sink. Maybe you could try it next time. :D

We are so glad to hear Rosie is okay. Arthur, that must have taken lots of work to catch that rat!

And Kim, we bet you will feel better now that you got a grooming.

I think it has to do with long haired black cats. I have one that is too smart for her own good. She is very hard to catch to take to the vet. She wakes up the dead with her screaming once in the carrier. She is very good in the vet's exam room, though!

What a week! We're glad that you are OK, that KIM is all relaxed once on the table, and that you don't have to think about it for another 2 months!

How lucky you are that Kim is so relaxed having her furs "done".
I always do Hannah's furs at home (a little each day) the vet had to give her a whiff of "gas" the only time they tried to tidy her up!! She was like a mad dervish!
Luv Hannah and Lucy xx xx

Wow Kim sure did lose a lot of hair, but I bet it feels better now!

Whoa -- that's a lot of fur on the floor! Maybe you could use it to stuff a cushy pillow! LOL!

Aww, Rosie loves her vet which is good as check-ups will be less stressful for all.

As for Kim, perhaps you should try to pet and stroke her often so she will come to you naturally. Our human has tried it with our timid Winnie and it worked. It need constant work.