CATS ON TUESDAY
As boring as the week was, as agitated was the weekend ! A mini human visited his grandparents together with his Daddy. Except Arthur who was delighted about this new company which brought a little life in his daily routine with his human mummies, Pookie, Rosie and Kim didn't like the visit at all ! Especially the first day. 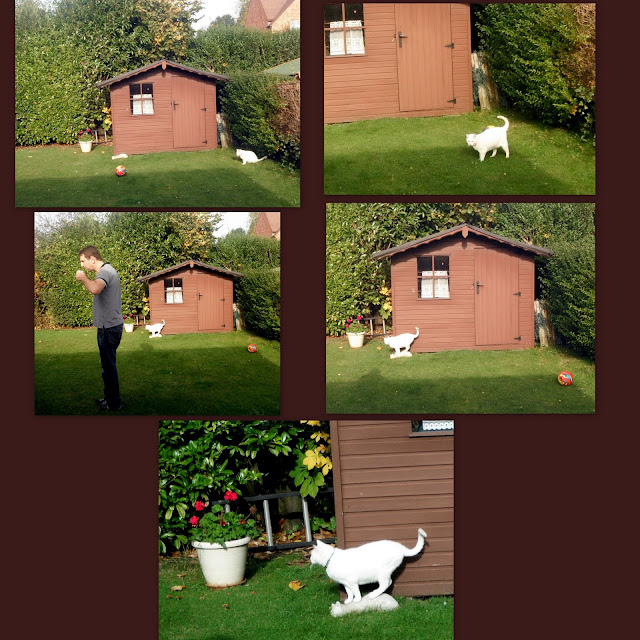 Arthur played football (soccer) together with Toby, Mr. G. and the giant human, and as goal keeper stood on the cat statue, only Arthur can choose such a place ! He ran after the ball which I found rather amazing because compared to his size, the ball was rather big ! 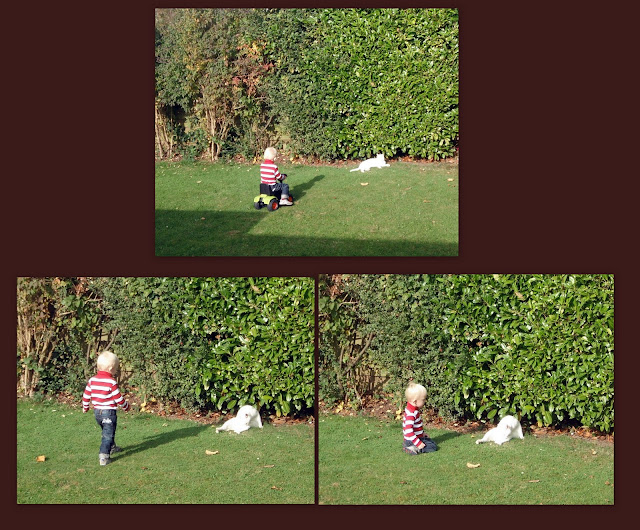 He watched over the mini human and Toby learned how cats take a bath ! Arthur really showed his best ! 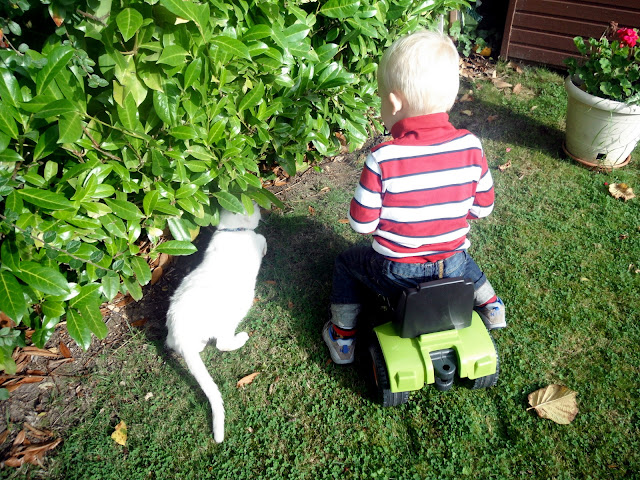 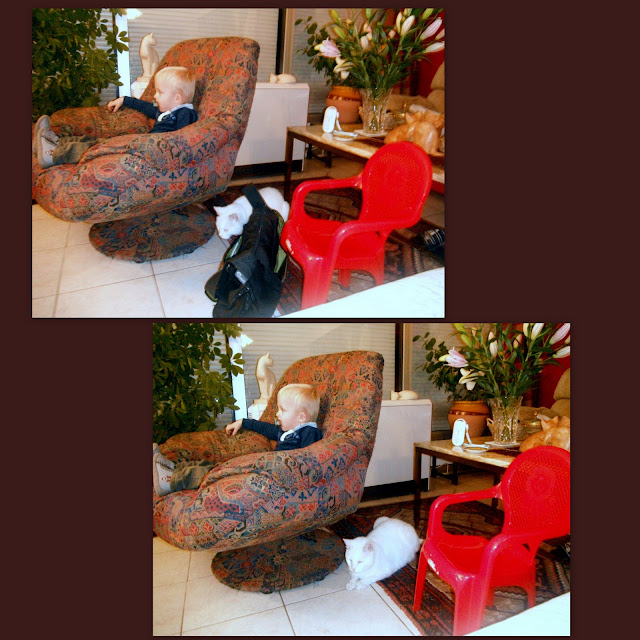 In the evening they watched TV together, Arthur always besides.

He also watched him playing with the toys inside 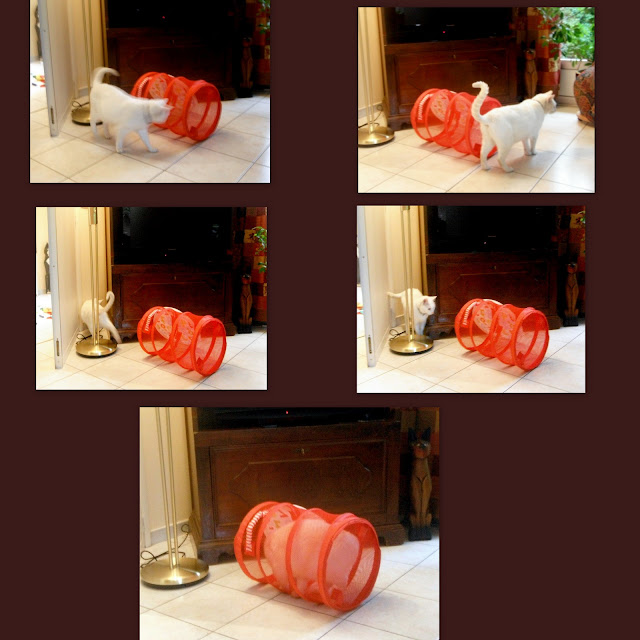 and after Toby had gone to bed he tried out the toy box and used it as a tube to play inside ! Arthur suddenly was a young boy cat again ! We had such a fun !

The others retired on different beds and just crossed the kitchen to go outside. They didn't hide anymore because they were quiet reassured, the mini human didn't bother them, he didn't scream, ran behind or even tried to catch tails ! He was a very good boy ! 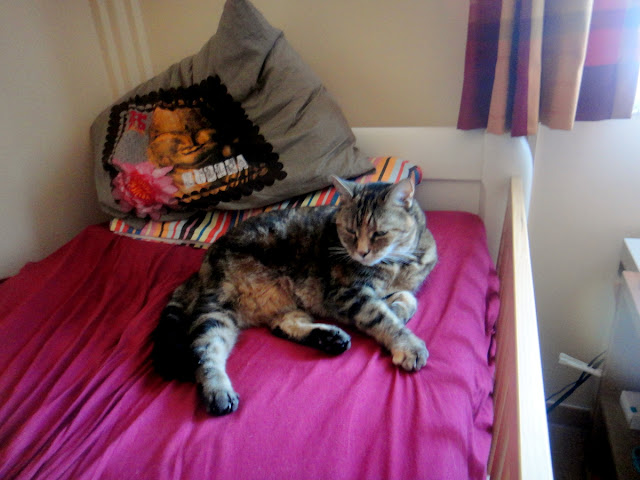 Pookie listened to all these strange noises and to what was going on in the house on Mr. G's bed 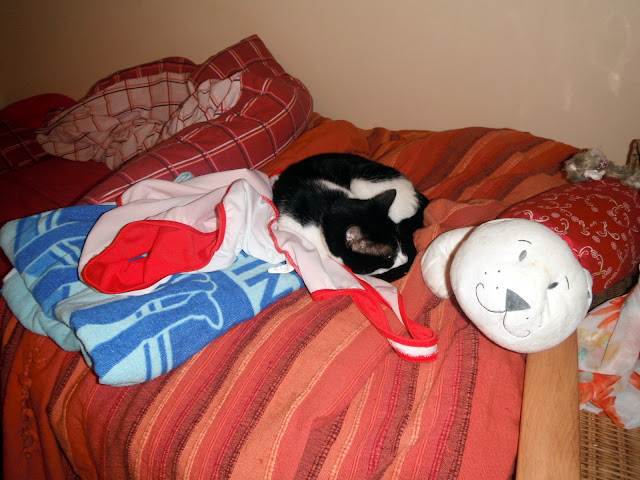 Rosie slept with one eye open (you never know) 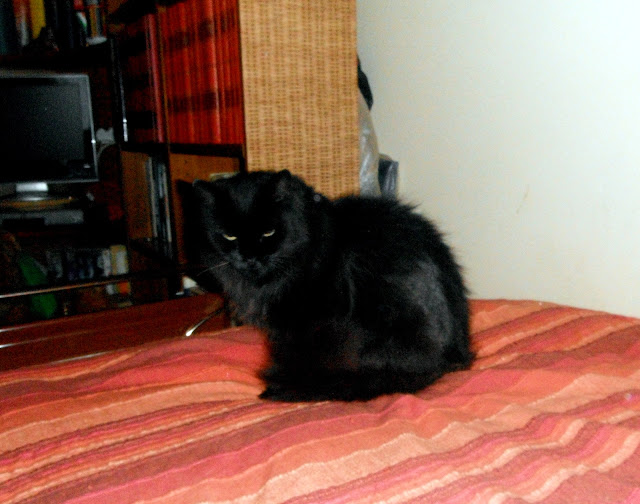 Kim looks very nice now since she had been at the groomer, all the red fur is gone and she looks really beautiful. I only saw her once sleeping on the bed.

When they were gone, Arthur helped to put the toys in the box, pulled the string with a little telephone through the kitchen and collapsed then in Mr. G's office to rest.

Arthur did an awesome job of playing host!

Arthur must be hoping Toby will visit again soon. It's great to see him beside Toby so much.

Well, at least one kitty had a good time! I love how he's standing on the statue kitty!

Arthur is so good with Toby, amazing! You will have to get him a play tunnel of his own :O)

Arthur you did a great job watching the mini-human !
So I can understand that you crashed in Mr G office :D

Bonjour dear Gattina and cat friends!
Adorable pictures, it's wonderful to see the friends together, Arthur and Toby!Sweet friendship!
Léia and little LUNA - WE LOVE LUNA

Well done Arthur, you obviously know how to deal with mini humans!!!

That's good Toby is learning how to be nice to cats--I'm sure they appreciate it.

I just love the pictures of Toby with Arthur! So very sweet! Seems Arthur loves children!

That mini human sure is a good boy, and so is our pal Arthur! :)

We loved the picture of Arthur standing on the cat statue! No wonder he was asleep early after playing with Toby and showing him how to do a spit bath!!
Luv Hannah and Lucy xx xx

It's vey sweet how Arthur likes to play mini-human. I like seeing kids and cats together :)

You know...I don't think I've ever even SEEN a mini human. Hmmmm...do they taste like chick-hen?
; ) Katie

What a grand babysitter Arthur is! It's wonderful to see a miniature Cat Daddy in the making.

Arthur is a purrfect mini human sitter and it looks like the small addition could be trained to provide treats! :-)