Since quiet a long time Rosie hadn't put her mousies in the food or water bowls, she didn't play with them either, I think she had decided that it was mousies' summer holidays.

But now she opened her hunting season again and twice I found a real mouse corpse once in the commun water bowl and once in Pookie's food. Both times I burried them without flowers in the toilet and flushed. Maybe I should have shown more respect to the poor creatures. 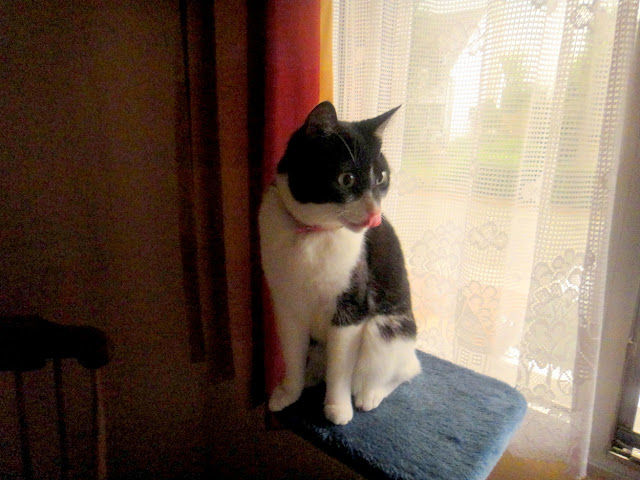 Rosie very satisfied about her nightly huntings cleans her whiskers 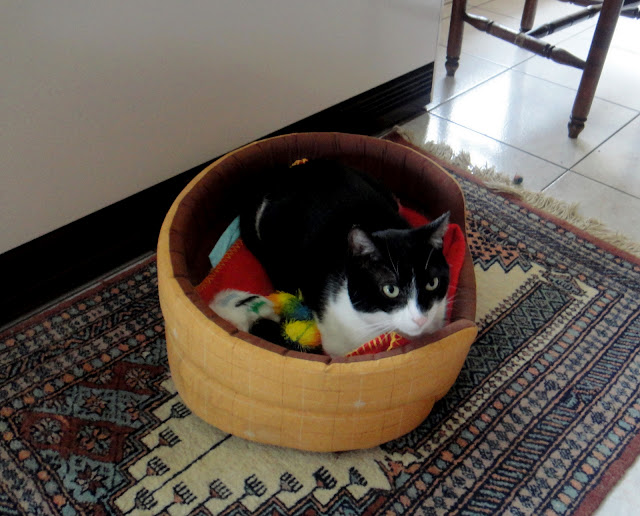 I still can't believe that behind this angel like looking cat a terrible killer girl is hidden ! 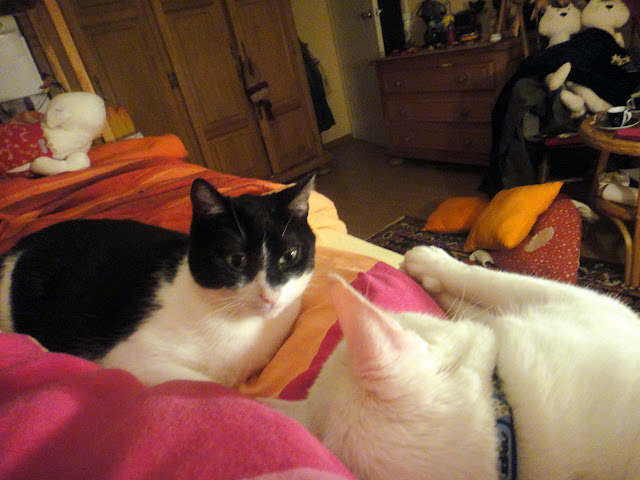 Arthur doesn't care and for a while kept her company on my bed during the nights.

Now he has changed and moved over to Mr. G and Pookie. Now it's a snoring trio. 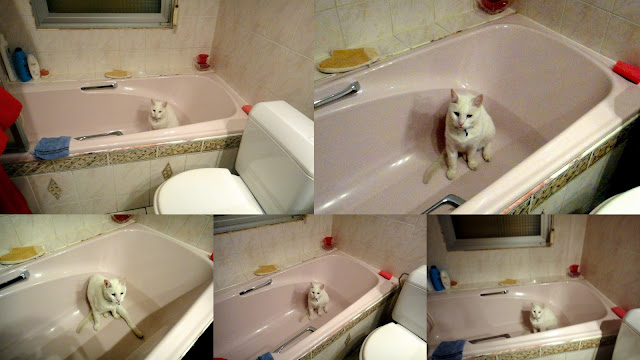 He also loves to control our hygiene by sitting in the bathtube (when Pookie is not in there to chase her tail) and observing us. He also shows us how to wash ! 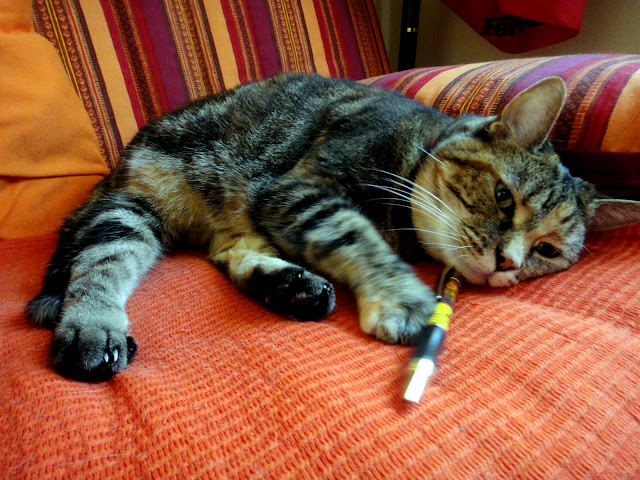 Pookie suddenly is very active in the mornings, she runs around as if the devil would chase her, turns over all rags and doormats and hides pencils and ball pens under them. No wonder that I am looking for a writing instrument the whole day. 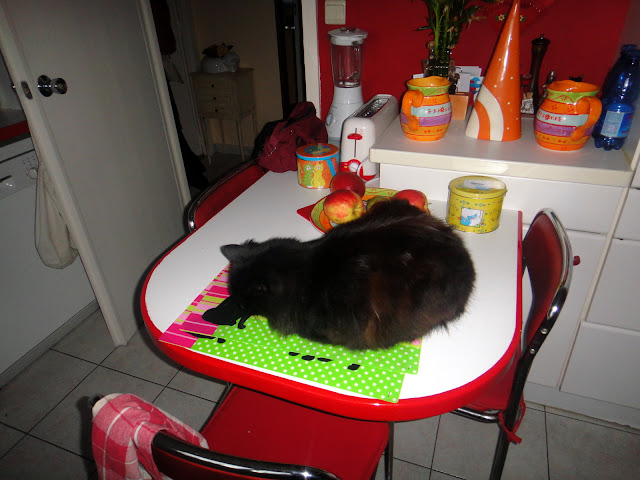 Kim finally had decided that now it's too cool outside during nights and moved in again. Unfortunately she has chosen the kitchen table as sleeping place and there is nothing to do each night she sleeps there and when I come into the kitchen in the morning she jumps down and hides in the basement ! Yesterday I heard rumbling in my wardrobe, suddenly the door was pushed open and a black arrow dashed out, while I was peacefully sitting on my chair at my computer ! My poor heart ! Living with cats is dangerous !

P.S. just found another real mousie in Pookie's food bowl ! Another funeral, this time in the bin !

Heehee Rosie, you looked so angelic in that bed, Mom is right, it doesn't look so obvious that your a mousie killer! Well just be sure wash your mouth after hunting...meowww!

Fall is a great time for mouse hunting, as Rosie so obviously knows!

Living with cats is dangerous - you not only lose your head, they also rob you of your heart.

Hi Gattina,
your cats are so nice. There is never any tediousness in your house. Love the idea, that the cat put her mouses into her foodplate. What do they think in their heads?
Best greetings, Johanna

MOL, it's like living with a warm furry poltergeist!

What a GOOD hunter you are Rosie !!

Arthur it´s really good of you to show your beans how to behave in the tub :)

Pookie me too hide my mom´s pencils :)

Kim , it+s nice to see that you now are an indoor kitty !!

Have a pawsome tuesday :)

Bonjour dear friends!
I guess Pookie could help my mammy Léia with her French homework,she always has to write something in French.
I also like to go inside the tube to inspecting everything there.Last week I decided to drink water with soup and then I throw it up! Nothing good at all...
Very nice that my friend Kim is inside home.It's cold outside indeed! :)
purrs and love to you all
Luna

We've had some excellent hunters in our extended cat family: Missy caught birds, Chauncey caught crickets, Sasha caught mice and Jenna goes for anything that moves!

Great pictures! I found 2 mice on my patio this week...not sure which one is doing all the hunting, but I suspect Rudy! Love the pic of Kim on the kitchen table. lol
Cindy, Rudy, Sam and Buster

We had to admire Arthur for showing you both where to start your bath - does he sit on the side while you are bathing to check you haven't missed a speck of dirt? Rosie must think you are starving if she is bringing in your
morning mousie to pad out your brekkie!!
Luv Hannah and Lucy xx xx

Yeek. Your Mom flushes the mousies down the toilet!?
Everycat in the family looks very happy and well. And it's nice to see Kim again!

Never a dull moment at your house! We are jealous of Rosie and her mousie kills; we would LOVE to have hunting like that!
Arthur, make sure you get OUT of the tub when it's bath time, human's baths are so...wet.

I wouldn't want to have to dispose of all those mice Rosie's killing but I guess it's a good thing she's so skilled at it! What creative and original places your cats find to nap or play, lol!

What a beautiful cats in this post!!!! Lovely pictures!!!!

Oh mine goodness mousies in da bowl? Maybe they are getting a bath before eating. Hee hee.

What a precious post...your furbabies are so cute! You gotta love those cats lol...they are something I tell you :) I love cats too and am glad I found your blog...I love it and I will be joining in your linky party someday soon...
Big hugs,
Queenie

You go Rosie, the mouse slayer! Arthur, its nice of you to help your humans to clean the bathtub, Pookie I guess you like to play hide and seek with pens?! Have a great Wednesday! purrs, Rio from Barcelona

Did you know that many places recycle the water from sewerage? So putting dead mices down the toilet may not be a good idea. There is one place in the UK that boasts that water passed in the morning is purified and cleansed ready to be drank in the evening of the same day.

Rosie, you are a clever hunter, just like my Rappy and Callie.

What would we do without our lovely feline friends.

We are glad to hear that you are seeing more of Kim these days. Rosie is a mighty hunter, indeed; those mice don't stand a chance. Arthur makes us laugh, sitting in the tub like that. And Pookie ... we hide pens and pencils, too! :)

Hugs to you all,