From time to time I need some cash in my wallet and while taking a 50 € bill, it fell on the floor. 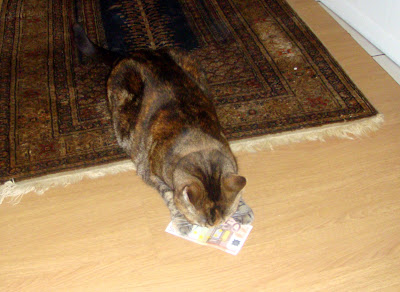 Pookie thought it was for her and as she loves to play with paper, she jumped on it right away. Maybe I should have been a generous person and let her play with the bill, but then I thought that's a quite expensive toy and took it away from her. She wasn't very happy about that ! 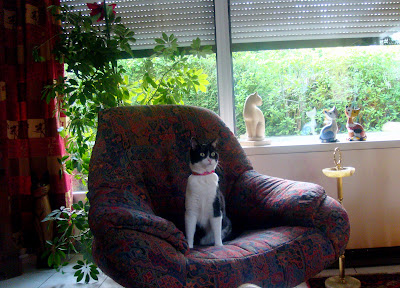 Rosie watched us and was scandalized ! 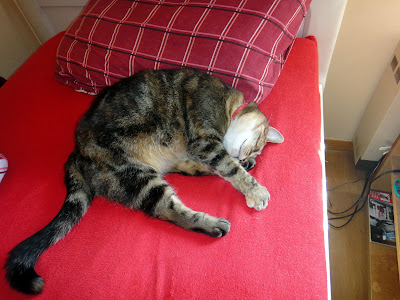 After her game with the bill, she continued her spring sleep which she had started after her winter sleep. She spends her time mostly on Mr. G.'s bed. 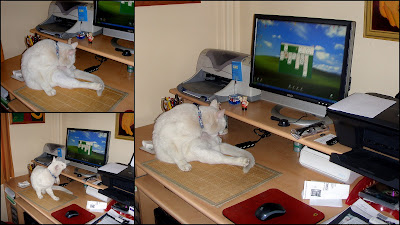 Arthur has found a new occupation that means to do his grooming while Mr. G plays cards. Sometimes that gives strange results. The cards disappear, another program shows up and when he scratches himself the whole desk moves and Mr. G gets dizzy. But he would never disturb his darling, so he is complaining to me but I shut my ears. After 41 years of marriage you learn that ! 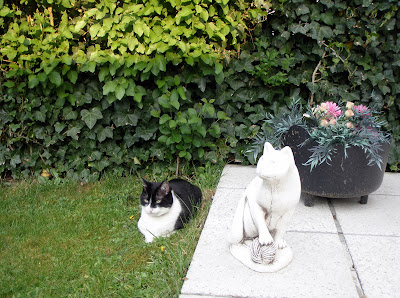 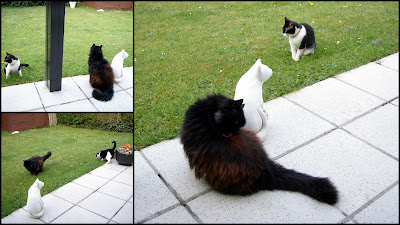 As the weather keeps on being warm and sunny, Rosie likes to join Kim in the garden. She tries to play with her, but Kim just doesn't know what playing means, she just sits there or goes away. She really is strange.

I guess I am not very "smart", because I never succeeded in sending you a message... :-)

Your cats are wonderful! I have a little preference for Rosie, because I am just fond of Tuxedo cats, and she's sooooo cuuuuute!

Have a nice day!

Euh, I don't have anything to hide, but I didn' expect my e-mail address would appear...

Haha. 50 Euro is a very expensive toy indeed! I would pick it up immediately too!

The picture of Rosie looking scandalized had me in stitches just imagining what the two of you were doing. ;)
Arthur looks so intense keeping his coat clean, Pookie has such a sweet smile in the picture and Kim is looking good!

I just wonder " Did Rosie wear a fake eyes in the first photo ? Her eyes look Massive Alert !!!!

Hee hee, Rosie cracks me up! She is just too cute. My Mimi can get my computer to do things I still haven't figured out lol! Lovely pics this week. :)

The weather is warming and the birds are swarming. Lots of sights and sounds to delight our cats.

Her ist is cold, we had frost last night. Hope it will be warmer for the weekend.

Rosie's expression on that sitting picture is very funny.
It looks like the 50 Euro bill is a fun (if expensive) toy :)

*mol*
Rosie´s look sure lookes scandalized :)
Play with 50 euro lookes like much fun !
Sure understand that Pookie needed som rest after that :)
And you Arthur have found the PURRfect spot for grooming !
See that you still have PURRfect weather !
Here in Sweden it´s raining today :(

Oh that expression was funny but mum said she agreed that it was an expensive toy. Hugs GJ x

We came to wish Rosie a happy birthday (May 5th)! We hope she has a great day!

Haha, we love that picture of Rosie being scandalized. :) And we love how Arthur and Mr. G. are so close!

We heard it is Rosie's birthday, so Happy Birthday to our pal Rosie! :)