For the third time this year, Kim's fur was again full of knots. So I decided to take her to the groomer. What a show to get her in the cage ! I felt like a tiger tamer ! I had to chase her in the kitchen, close all doors open the door to the basement where I had also closed all the doors so there was only space on the steps where she couldn't hide. 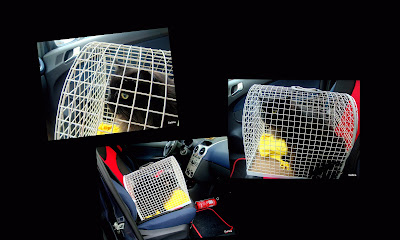 Here she looks as if I would take her to the slaughterer ! 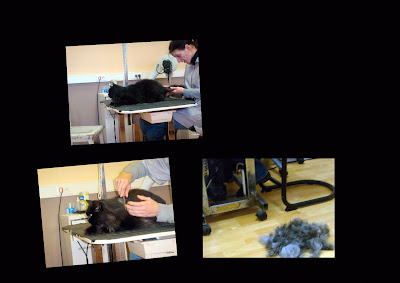 But once there she completely changed, she let herself take out of the cage without any protests, then she started to purr and kneaded invisible dough with her bottom in the air ! It was rather offending for me ! With all the hair the groomer combed out I could make a second cat ! 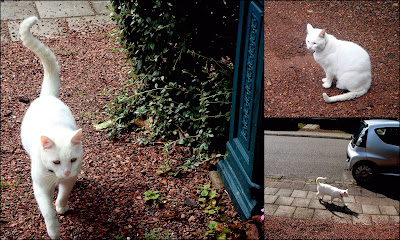 Each time when I go to my neighbor Domi, Arthur comes with me. Yesterday I went over with the flight informations for our holidays in Egypt and we sat in the garden while Arthur meowed loud at the gate until I opened it. He could have gone through easily but he decided that I had to open the door. Then he settled down on the travel catalogue and did his washing. Arthur loves company. 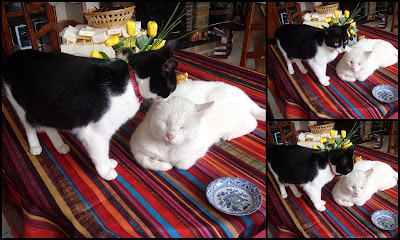 For the moment it's love and harmony between the couple Arthur/Rosie, until she starts to hunt his tail again. 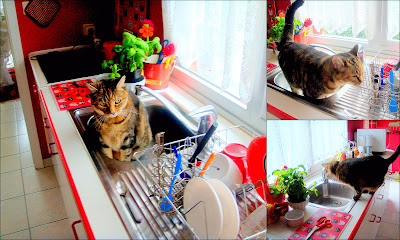 Pookie has decided to sleep in the kitchen sink and I have to take her out each time I need some water. She doesn't like this at all and meows her protests.

As you can see my life is not easy !

What a fun bunch of cats!You sure do keep your Mom busy!
Mandu

Kim,you are a drama queen today : )
And Rosiie, you are so sweet, I think Arther feel mellow when you kiss him : )
Pookie, That's a smart place to be : )

Kim is so wicked to make such a fuss with you and then curl over for the groomer, but at least you can pretend that she's well brought up!

Love the way Arthur and Pookie tease you.

Hahaha, cornering a cat is never easy and can be exhausting sometimes. I groom the cats myself.
King Arthur behaves and wants to be served like one! LOL!

I,m sure Kim really likes to look and feel good after a grooming session. Rosie and Arthur look content and Pookie happy in the sink BUT have you told them all you are off to Egypt again. I hope they will be good for MrG and you have a great holiday and bring the cats back lots of souvenirs.

Bonjour dear friends!
OMG poor Kim, and poor Gattina LOL
I imagine the scenery there! But I think now Kim is feeling much better and she is such a sweet catgirl!
Those pictures of Rosie and ARthur are so beautiful and I'm surprise in these cold days that Pookie likes the fresh spot to take a nap.I would prefer my blanket indeed!LOL
Enjoy your day sweet friends and lots of fun with Cats on Tuesday!
purrs
Luna

Love the cute pictures of Rosie and Arthur.
We don´t think that a sink is a good place for a nap, Pookie.
*Happy Tuesday*

The fur is groomed and the lion is tamed. At least for a little while.

Hello! We are new to your blog...Mommy is laughing at how your kitties rule your life JUST like we rule hers! Naturally.

Some cats do seem to like resting inside sinks. I used to have a cat that did that. He actually liked the water, too.
Those pictures of Rosie and Arthur together are very sweet.

Wow! Look at all the fur that came off of Kim! It sounds like it was quite the ordeal to get her in the cat carrier ... we are glad it all worked out.

Arthur is such a social cat, and we love the photos of him and Rosie. Pookie, you would probably get along well with our cat Moosey ... he loves water, too, but prefers the shower. So you could have the sink, and him the shower. :)

Haha! What adorable furries!
I understand you completely Gattina. After all, I'm a Keeper myself (er, Pet Guardian?)I nag and get exhausted at the end of each day yet when I look at them furries I would never ever give them up for anything!

Cheers Gattina!
And here's drooly kisses to The Cats!

PS. Btw, I am using the name/URL option since it is easier to link back to us! ;-)

Oh oh! I often get comments from pet owners that it is IMPOSSIBLE to groom their pet but once they are with me, they become model pets. :) Lucky me, I guess!
You really have your hands full with the endless antics of your beloved cats!

What wonderful cats! I love the photos.

You should totally submit pics of them to the Lifetime Companions and Co-Stars Photo Contest.

The contest ends at noon on October 14th, so I'm trying to spread the word to all my favorite bloggers! Just submit a photo and you could win everything from cash to a one-year supply of cat food:).

Check out all the details here:
Companions and Co-Stars Photo Contest

Thanks and best of luck:).