MAKING THE BED WITH ARTHUR

Have you ever tried to make your bed when your cat is sleeping in it ? A normal cat would wake up, be offended and go away to eventually come back when you are finished. Not so Arthur !

Arthur when he sleeps he sleeps and nothing can disturb him, not even me with my bed making intentions. 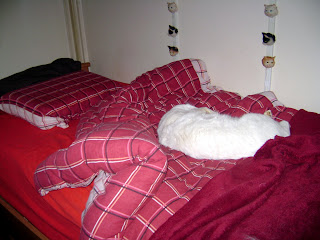 Arthur sleeps while I pull the bedsheet fix it, and shake the cushion. 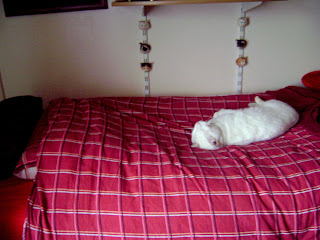 I pull the bed cover in place. Still with Arthur on it. 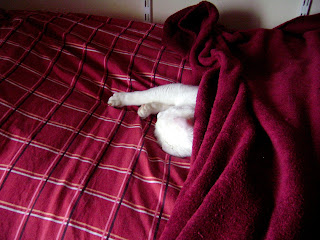 I then pull the blanket and as you see he still doesn't move. 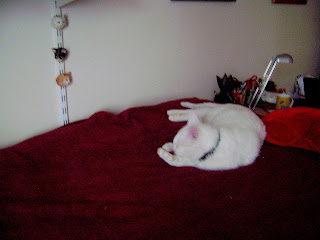 I lift him up with my both hands, just in the same position he was sleeping and put him on the part of the bed which was finished. Arthur just lifted his head a bit 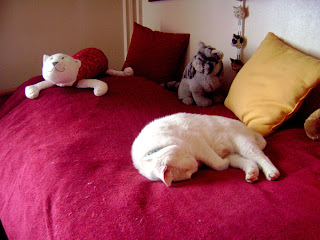 and let it fall down again and continues to sleep ! There is nothing which can disturb Arthur's nap !
Posted by Gattina at 2:45 PM

Ah now that's my boy! He knows how to relax and enjoy life!

*giggle*, Arthur is a very determined mancat! He looks so cozy and comfy, too. :)

Way to go Arthur! A real mancat doesn't care about anyone disturbing him!

I gave up making the beds. The kitties prefer the bed in its original state! ;-)

I LOVE your cats! They are all so adorable. I would be in absolute cat heaven!! I have two of my own. At one time I had five but alas they grew old and passed on. I feel strange with only two. I may have to get another one. :)

Thank you for your wonderfully funny blogs!!

Now that reminds of Oscar...he was exactly the same. Is it because they're males? I don't know, but Mitzi and Bella become really put out, as you say, because they've been disturbed. Who can understand the psyche of a cat??

Just found your blog via the Friday Ark. Love the look of it! My little Miles does he same thing; sometimes he goes under the covers and I end up making the bed and leaving a Miles-shaped lump in the middle of it. He doesn't seem to notice.

I will definitely participate on Cats Tuesday! How fun!

Hehehe he is too cute.
You can doo this with Luzie too. After a few girl cats I´m so excited to have a boy cat.
Bin nach meinen ganzen Zicken gespannt, wie es mit einem Kater im Haus wird.

Oh i like a red bed. it looks so cosy and warm! arthur you have nice white fur, i love that!

So you are really on strike too!!!!!!!!!! Ha! ha! I would want to stay with arthur on the bed but I have to go now to school! On en a marre de la vie chère! Luttons Pour que les prix baissent!
Bon après-midi à tous les strikers!!!!

Arthur is definitely a nap-master!

We gave you an award, please stop by our blog to see!