After a rainy day, Arthur was in a playful mood and started to scamper like an old rabbit behind his little Rosie, light like a feather (see the picture !) 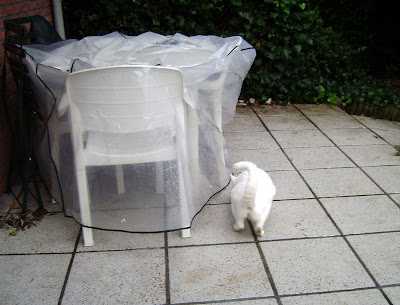 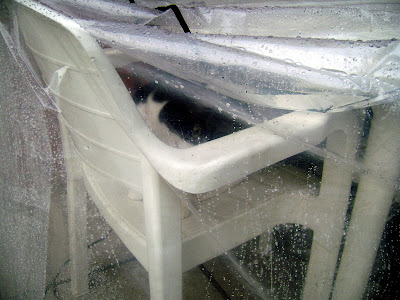 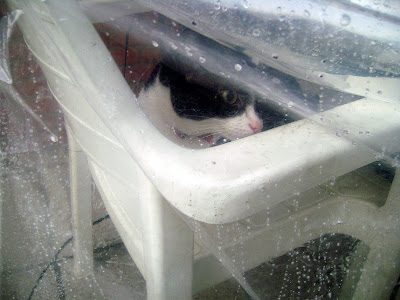 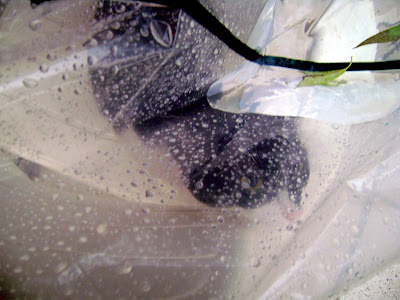 and peeked out. Arthur of course was still looking on the floor ! 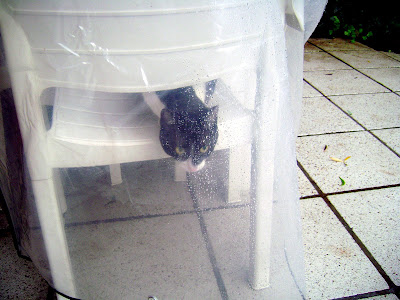 Finally Rosie had enough of hiding and sneaked out. But Arthur had given up and strolled away !

He had better things to do ! Sleep ! 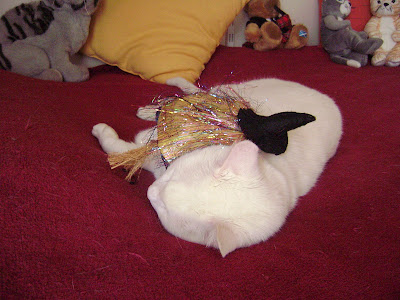 It's rather frustrating to have an always sleeping model ! How can he scare people when the witch collapsed in his paws !

He told me that he is fat up that everybody tells him that he is NOT a Halloween cat because he is white and not black. As he doesn't want to tint himself into a black cat, he decided to be a ghost ! Nobody can say that ghosts are not white ! 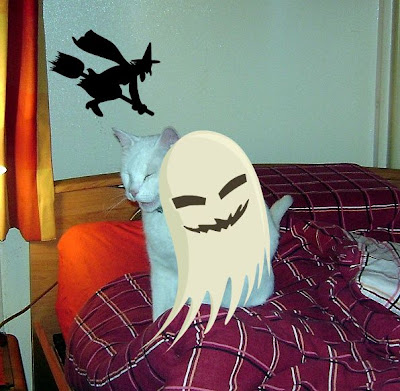 and here is ghost Arthur !

Does Arthur sleep even when he is sitting up, as in the last picture...he has his eyes closed. What a funny cat!

Arthur looks like a champion sleeper. Love the way he simply crashes wherever he likes. And isn't Rosie getting big?

Arthur's on Halloween mode now! My cats also love entering plastic bags... I think they love the warmth inside.

Oh yes Arthur is a perfect Halloween cat-ghost cat..
He is a good sleeper, I think Olli will be that too... He can fall asleep during he plays .
Playing, eating, sleeping...what a good cat life!
Happy Tuesday

I think Arthur and Rosie will make a perfect Holloween couple!

Oh Rosie is such a devil! LOL! And look at handsome Arthur, he has such a wonderful face!

Rosie is so funny teasing Arthur! He looks very cute snuggled up with his witch!

*giggle*, Rosie and Arthur are both so cute! Arthur looks like he's having a nice nap with the witch. :)

This last photo is just too adorable! Happy Halloween Rosie and Arthur! Hope you can trick your Cat Slave out of lots of treats!

halloween is near! muahahaha

I think Rosie was very smart to get up under the plastic cover in the rain. Arthur sure does love his naps! He makes a very good ghost cat.

Rosie and Arthur are so cute playing together. Arthur knows he looks great if he sleeps. ;-)

Oh what a nice cover to walk and climb around int. Very safe from wet.
Arthur, you make a very handsome ghost!!

It looks like Rosie found a perfect hiding spot to stay dry in! I like Arthur - their relationship is cute because he's like the old, wise cat and she's the young hyper thing, hehe!

Cats always tickle me in the way they can find the best hiding places! Good to see these two are still buddies and having fun together! I loved the shoe post (above).