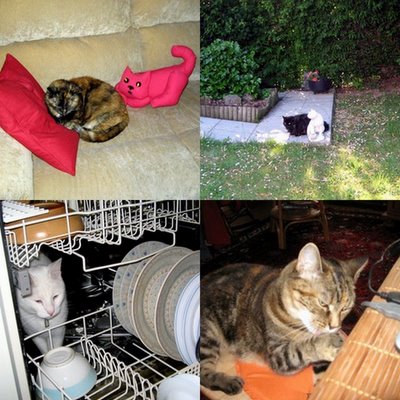 All cats decided to go back to normal Blogger life. They were fat up that pumpkins, witches and other scary stuff were put around them and they had to make their most beautiful posture.

Except Kim of course as she cannot change her furr coat and that's not a question of money.

For me it's easier to switch to normal life as I only celebrated Halloween virtually on my blog and nobody put staff around me and I didn't have to disguise myself into a witch but there I am sure my husband would say I wear always this costum.

The mistery of this frog stick has not been cleared.

We have never seen it and we don't now where it came from. Probably a Halloween left over.

Lisa (with the red cat) is to old for such ridicolous games she would never pick up things in a street and also she only goes to one neighbour because she feeds her. Love goes through the stomac. And this neighbour has certainly never possessed such a stick.

Kim (black) either would never pick up something. She even doesn't play at home or very seldom, I think she played twice in five years.

She likes to walk around avoid all humans, lays in the sunshine to get white (not brown as we do) or when it rains likes to sleep in the neighbours dog's hut.

So there are two left, Arthur and Pookie (PC Pookie as I call her PC meaning "personal cat"). Pookie likes to play and also brings back little paper or foil balls and put it in front of your feet, she also likes to clean up ashtrays and disperses butts in the whole house, but she is inside most of the time. She only goes out for important businesses or when I am in the garden.

(she hasn't done this yet)

The only one we therefore concluded with the suspicious mind of Sherlock Holmes must be Arthur. He loves people and is well known in the whole neighbourhood. He also likes to discover other bedrooms, and above all comfortable beds, basements with fresh laundry and garages with open car doors. He is a very social cat.

We still are unable to understand how he carried these big things in our house and that through the cat flap !

A little frog stick is nothing for him. He probably found it somewhere in a garden or besides a garbidge can who knows. And I don't see myself going from door to door with a frogstick like the Jehova witnesses with their bible, and ask to whom the stick belongs (or to convince them to take it) !

Conclusion, he was it ! Also when he always looks so innocent

And finally it's a nice gift isn't it ? I can put it on a cake or on cheese and that changes for a bit, as everything here in the house is in cat form.

I suggest this form of gymnastic for everyday, and over all during the forthcoming feasts.

Cute story! Our cats are our children! I haven't written about mine in a while and they do make for a great share! You know yours very intimately and they get lots of love I can tell! Thanks for clearing up the mystery!

You forgot the turn-around step. Stand up turn completely around and lay back down in the same place you were before, then nap for three hours for being so tired from standing and turning around!!

Oh my, do you clean your cats in the dishwasher?