I wanted to show you the latest napping places of my cats. Lisa discovered the microwave although it is standing there for years, maybe not this one, but then another. It's only since two days that she is sitting there and is upset when I open it to put something inside, because Madame is disturbed in her rest. 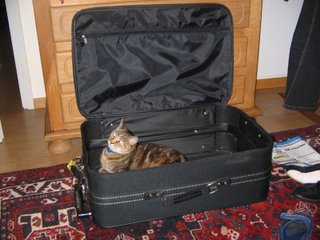 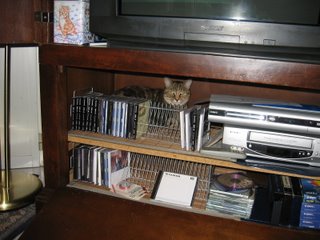 And also Pookie left her "holy seel" besides my computer and moved in an open suitcase and in the evening while we were watching a video, kindly dusted behind the player.

Arthur since a few days squeezed himself between the armchair and the cat house (instead of taking his nap in there) and loves to stare at the ceiling. I checked but couldn't see anything not even a spider.

Kim also wondered what he is doing there.

But after satisfying her stomac, she also found a very nice place .... 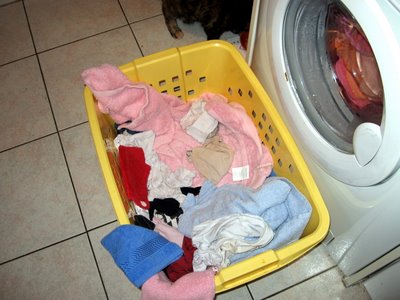 the laundry basket which I had forgotten on the floor and found a nice cosy place in there. I discovered this the next morning and had to clean off all the black hairs she left me there as a friendly souvenir. 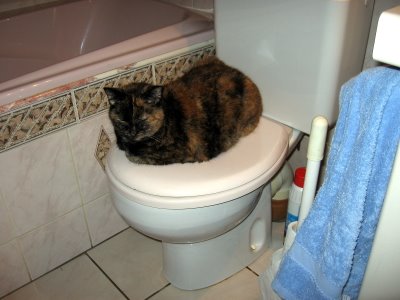 And then I found Lisa here, where I wanted to go ! and there were nothing to do, she decided to stay and not move a bit. So I resigned and went to the guest loo.

Gattina,
you are so right: Observing cats are really good for your mood and daily life. Your stories are adoreable.
I have some similar on my blog (more will come), you're welcome to visit.
However, thanks for sharing your catstories (I found your blog at RennyBa - a friend)

Wherever a cat is napping it's probably the warmest place in the house.

I love your cat pictures!!!

furry nice all of you! we like the laundry basket best and we always cover everything with black fur too.

Oh boy, what a big job for you.

Gattina, your cats are very pretty, but I like the white most.