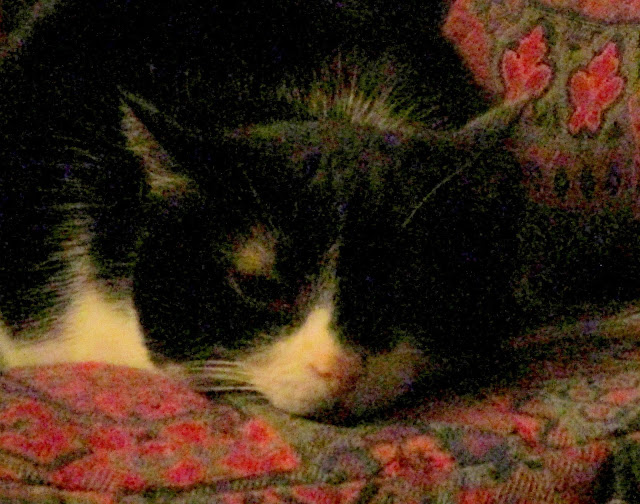 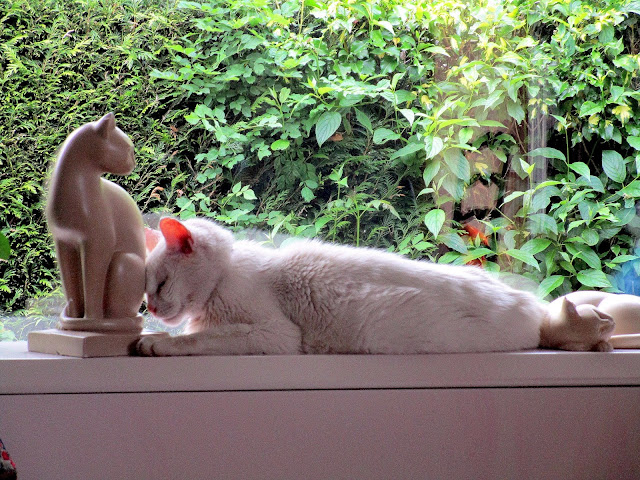 It's so nice to sleep on the radiator, can't do selfies anymore, I don't want to ! I want that everybody keeps in mind that I was a handsome boy and my servant agrees !

In the evening while I watch TV Arthur sits or sleeps on my lap. Since a week Rosie joins and lays besides him. That had never happened since Rosie was a kitten. 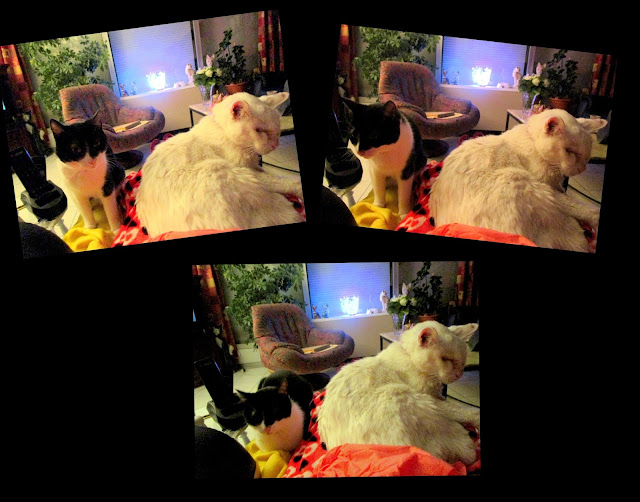 My lap is not large enough for both, so Rosie sleeps just besides. I refuse to put on weight to have space for both cats ! 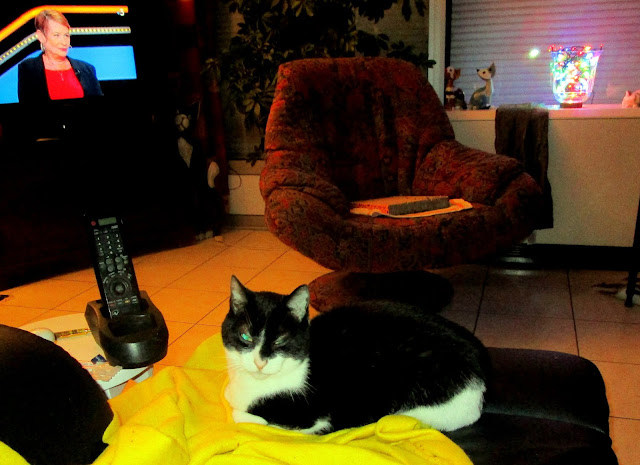 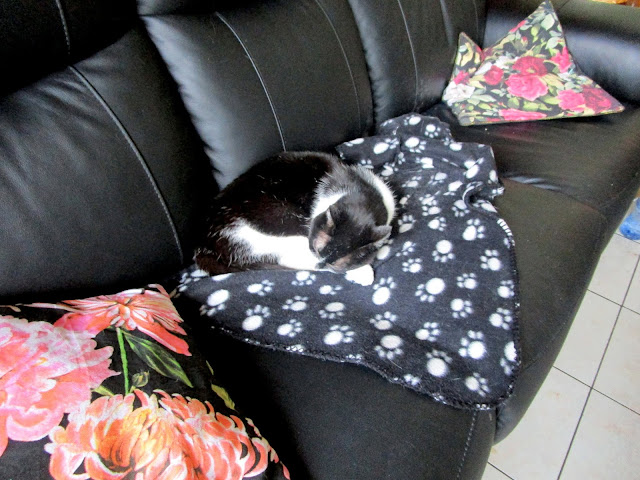 Or on Mr. G's place. She is the only one who goes out mostly during night, Arthur doesn't go out anymore. He became very fearful outside, but when we have people at home he is still the old crooner. 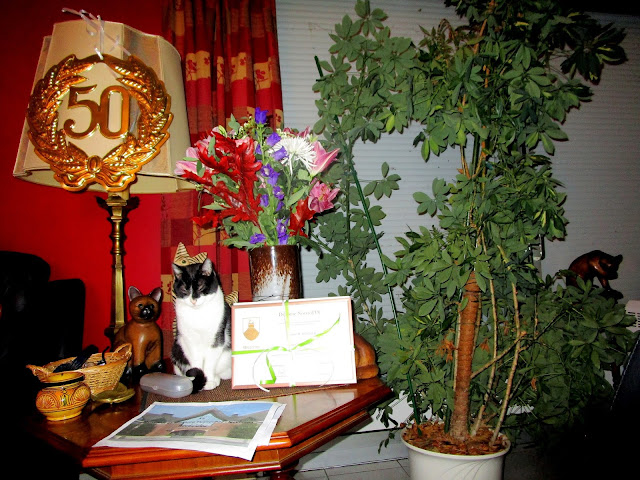 We had celebrated our Golden Wedding a celebration had been organized by the city. Rosie presented the Diploma we have got together with flowers and a vase. 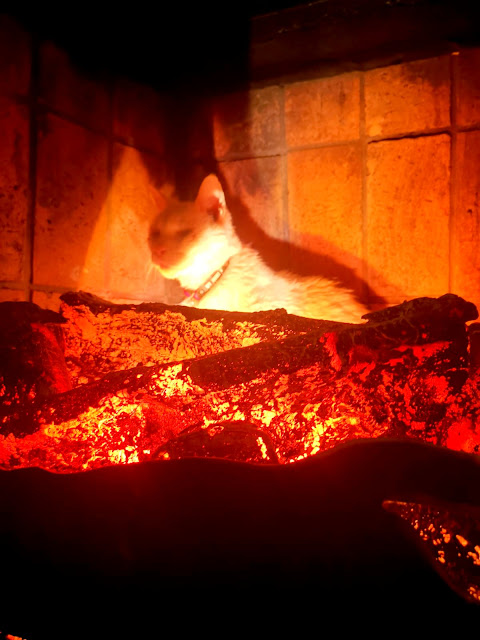 We had invited our family and friends and Arthur was happy to be amongst so many people ! And to honor his reputation he sat in the open fire, fortunately with fake logs 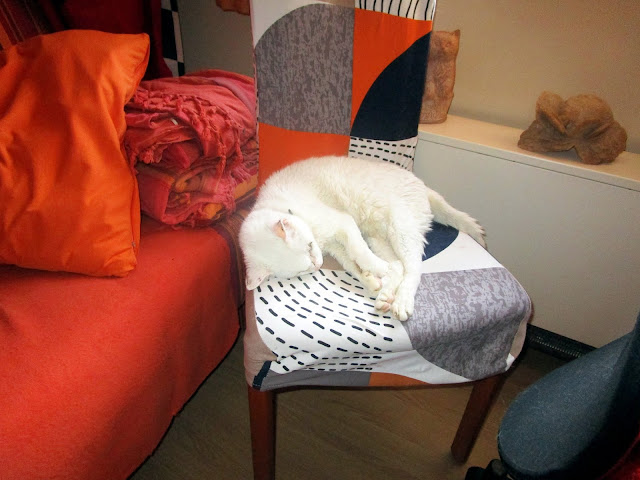 After they went home he retired in Mr. G's office on a chair he had never slept on.

His appetite is still good and he also uses the litter box, only sometimes he doesn't sit in the middle, but I put a doggy pad underneath.
Posted by Gattina at 7:00 AM

How cool that your Golden wedding got acknowledged by the city!

CONGRATULATIONS on your Golden Anniversary! And as Summer said, how cool that your city gave you a certificate and a gift of wonderful flowers.
Arthur and Rosie have a great life and a loving family, and what more can a feline desire.
Lots of Purrs for you all.
ERin

Congratulations on your Golden Anniversary!
We love how Arthur placed himself between the two kitty statues.
Purrs and hugs!

Congratulations on your Golden Wedding Anniversary.

Those pictures with the kitties make Us feel all warm and cosy.

Congratulations on your golden wedding anniversary! And that is special about Arthur and Rosie sitting on and next to you. <3

Congratulations on your Golden Wedding Anniversary! I love that picture of Arthur on the radiator.

Thank you all for your wedding wishes ! It really had been a special day !

Congratulations on your Golden Anniversary. Glad Rosie and Arthur could help you celebrate.

Heartfelt congratulations on your Golden Wedding and how thrilling to have it so celebrated!

Your Arthur makes me smile. He is a sweet boy and a handsome one, please tell him from me.

Wow, the city recognized your Golden Anniversary? That must have been nice. Oh, and remind Arthur that he is still a very handsome boy.