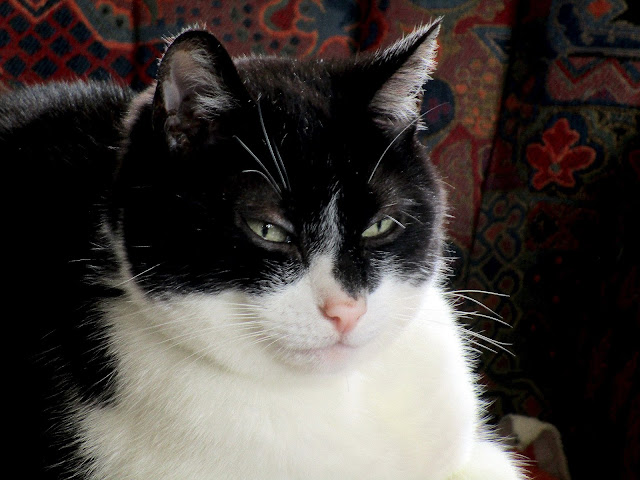 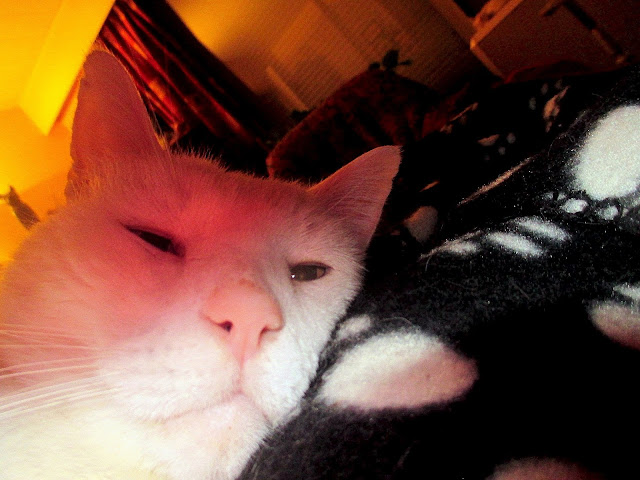 The main News this week is that Kim has left us forever. I observed her over the weekend and it got worse and worse. She ate, but vomited immediately after. She carried herself with difficulties to Mr. G's room to lay down on the carpet. She must have had pain in her back too. On Tuesday finally I couldn't stand it anymore and we thought it would be better to have put her asleep.

The vet came and without protest I could carry her and hold her on the kitchen table and then she died peacefully. It was a real relief for us and for her. She would have been 20 years old on Christmas Eve, when she was born in London from a cat which belonged to my friend Anne.

My son who lived in London for almost 8 years, choose her as company for Pookie who passed away 2 years ago. 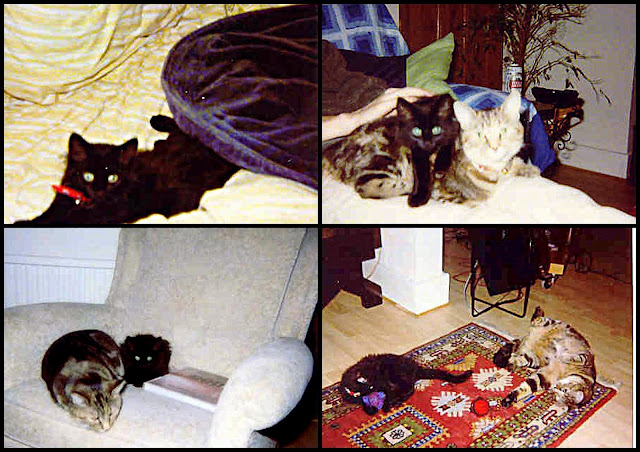 Kim as a kitten, a little black furball, but already with a strange character, she didn't play as other kitten do, only sometimes with Pookie whom she considered as her mother. 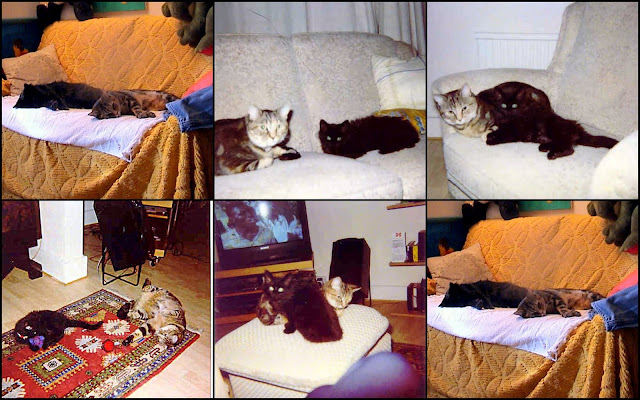 She grew and grew and soon was bigger then Pookie. She loved to go outside that's why when my son had to move into an apartment in Amsterdam for his work and took his two cats with him, she didn't get used. There was no problem with Pookie but Kim didn't support life inside. She didn't eat anymore and let herself die. That's why my son asked me to  take his two cats for 3 months the time he would be in Amsterdam. 12 years later she was still living with us ! 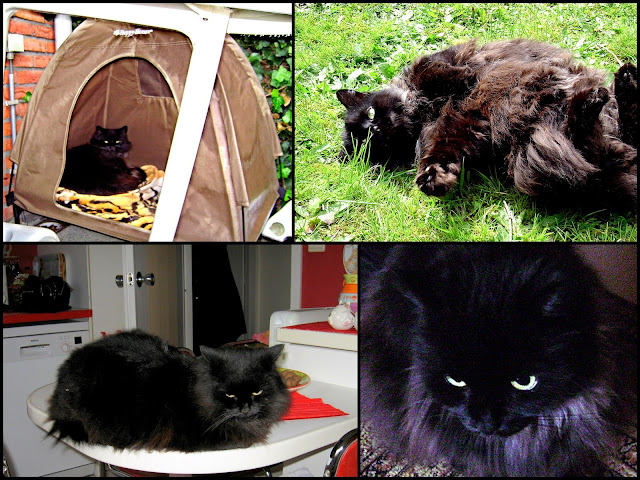 Kim was a real beauty, but was very special. She seldom came into the house or only when nobody was there. She slept outside or in the basement although she had everything like our other cats. She hated all humans us included and you were not allowed to pet or even touch  her she always run away. 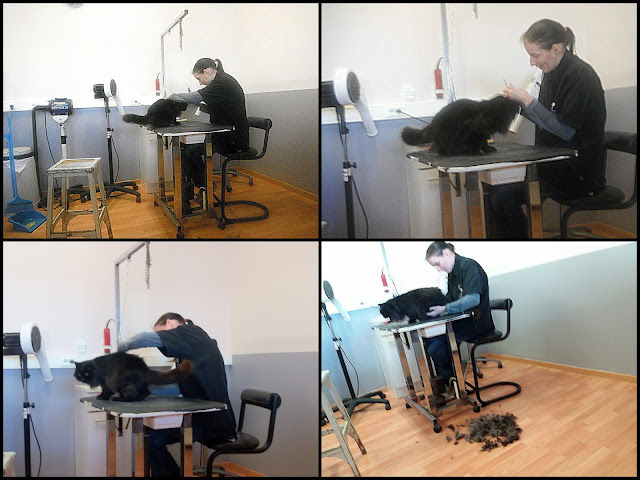 As I couldn't brush her, I had to take her to the groomer when she was full of knots. Each time a drama to catch her and put her in the carrier. And then when she behaved like an angel and the groomer could do his work without problem. She sad that she was the bravest cat amongst her clients ! And with us she run away ...

And suddenly she changed, she was sleeping more and more inside in Mr. G's room, she also allowed him to pet her. Not me ! I was good to feed her. This started about one and a half year ago.

Slowly, slowly she didn't go out anymore and used the litterbox in the Garage, which she had never done. She refused to sleep in a basket but preferred a bath mat. As long as she ate well and her fur was shining I wasn't worried. I thought this is normal after all she approached the age of 20. 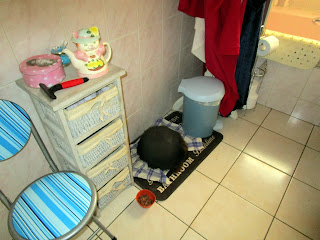 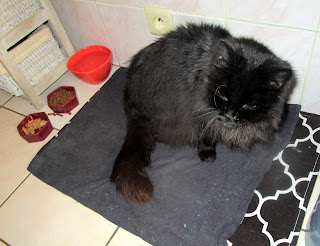 She was mostly sleeping in the bathroom 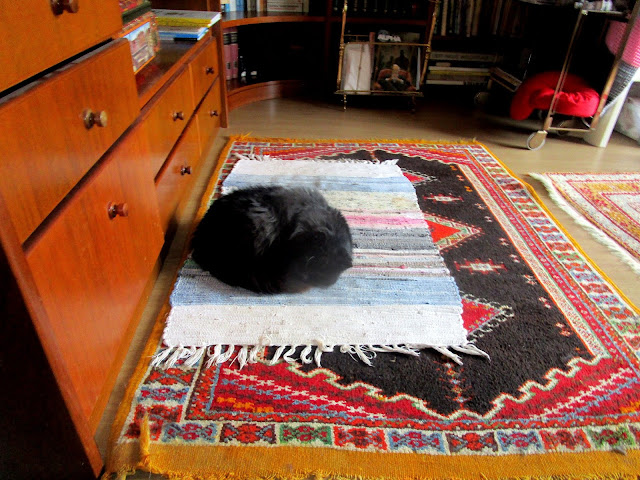 but also sometimes in Mr. G's room especially when the sun was shining on her.

And now she is gone, the bathroom is empty I always think she is still there. But she had a good life and 20 years is quite a long time for a cat. As she was mostly living outside we were used to not see her, so sometimes we think she will be back tomorrow !
Posted by Gattina at 7:00 AM

We are so sorry to hear that lovely Kim passed away. Gorgeous Kim had a 20 long wonderful life with you. Purrs and hugs!

I'm so sorry that Kim is gone. But she did have a good, long life, on her own terms.

I'm so sorry for the loss of Kim. She was truly lovely and she had a good long life.

We're very sorry to read about Kim's passing. She had such a good and long life with you, and your son before that. We will miss her! Sending you purrs and prayers.

Brave KIm, she is now pain free and reunited with her friends. Purrs and prayers for you and your family at this sad time.

I am so sorry for your loss. Kim was a beautiful kitty. XO

Oh Gattina, my heart reaches out to you all, and to Kim, who has now left us. I am so saddened by the news, but know this will be for the best.
This must have been very sad to write, but we are thankful that you have, and shared her life with us all.
Gentle purrs to you and your family at this saddest of times, but may the fond memories be a guiding light in the days ahead and occupy the space in your home and hearts where Kim lives on. . . .
Gentle purrs
ERin

I'm here t pay my respects to Kim. *bows head* I have a special soft spot for cats that never truly become domesticated.

We are so sorry to hear about Kim. Sending you many comforting purrs.

All cats are individuals. Kim allowed you to be her servants and surely enjoyed her life of privilege.

I'm so sorry for loss of your precious Kim. She had a long, beautiful life. My thoughts are with you...sending hugs xo

We are so sorry for your loss. Hugs and kisses.

I am so sorry for your loss of Kim and send my condolences.

Sorry for your loss but think that was very nice of your vet to make a house call! She was a beautiful cat!

That does make me sad, but your chat noir Kim did have a long, full life. You gave her nature space when she wanted it and indoor space when she needed it. I"m sure she thanks you furr giving her a home for all those years. Purrs for your loss.

That is so sad to hear, I am sure she had the best home☺

I'm so sorry to hear about Kim. What a beautiful cat and such a long life. I know you will miss her. Our thoughts are with you as you grieve your precious fur companion.

Kim sure was a beauty. We're sorry fur your loss. Sendin' hugs and purrayers.

The condolences of myself and all of my cat family on the loss of Kim. I always look forward to hearing your updates about her.

No more pain, no more worry. She is at peace.

I'm sorry for your loss. What a wonderful life Kim had. She was lucky to have found your family where she would be loved and cared for in a way that met her needs.

I'm so sorry to hear about Kim. Thank you for loving her and accepting her on her own terms. Deep compassion to you.

We are so very sorry to hear about your precious Kim and we send hugs and love to you.

So very sorry that you have lost your beautiful girl. Each and every loss breaks our hearts all over again.

So sorry of the loss of your purrecious kitty, Gattina. Soft Pawkisses to comfort you❤Fly free beautiful Soul❤❤❤

What a lovely tribute to Kim. I'm so very sorry about your loss. Big healing hugs. ♥

We did not have the honor of knowing Kim, yet wanted to say how very sorry we are. Hugs from all of us in trout towne

We are so sorry that Kim has moved on to her next life. She was certainly well-loved,and able to live life in her own way. She will never be forgotten.

Very sorry for the loss of your Kim. 20 years is a long life. No wonder you are still half expecting her to show up tomorrow. we send hugs.