I never had a cat like Pookie ! She is terrorizing us ! Sadly terrorism is in fashion for the moment, but having one at home and in a cat costume is another thing ! 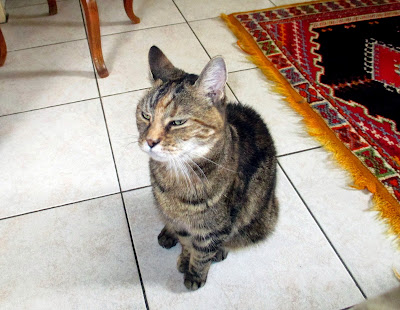 She starts meowing around 7 am, non stop until I get up and feed her. After that she wants to drink on the sink at the tap. I have to lift her up, wait until she finishes and then put her down. If you think that now she would stop meowing you are wrong ! She continues, I feed her again, she doesn't eat. I lift her up, she doesn't drink. She meows ! And that lasts until Mr. G is up too, feeds her and let her drink, but she only would stop once he had switched on the TV !! She is punctual like a train ... every single day ! Now I am waiting for the cat fountain, hoping that it will get better !

She also has found a new place to rub her chin !

and when the sun is shining she takes a sunbath with Kim.

Arthur too became a maniac ! He had chosen my bed for his naps for a week by now. 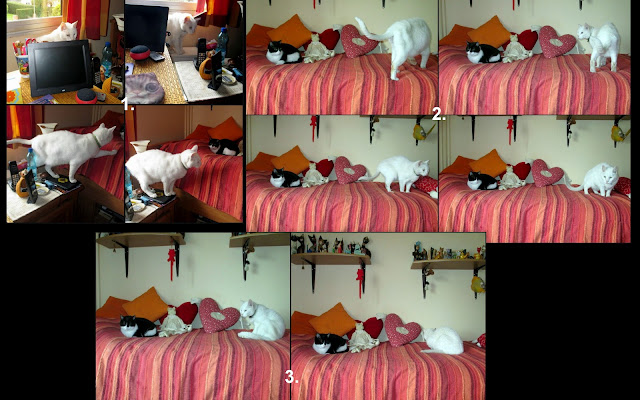 and he doesn't like at all when it is already occupied ! In picture n° 1 he thinks for a while, to sleep or not to sleep, in n° 2 he is shocked because Rosie is squatting the bed and hesitates to join her. On n° 3 he finally decides to also sleep on the bed but far away and turning his back ! 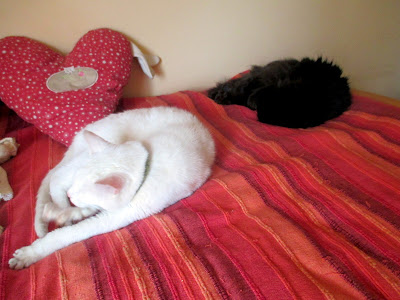 Only Kim is tolerated, because Kim never bothers anybody neither cats nor humans.

It's cool outside, Rosie choose the radiator for a nap

and Kim likes to sit on the new table cloth, as decoration.

The cats are furry little despots!

I like that new tablecloth - it makes for a decorative seat for the cats!

I hope that Pookie likes the fountain... but then, maybe it is the attention she wants!

I like to meow nonstop in the morning - once everyone is up and I am fed then I go back for another nap.

Wow Pookie... you am demanding!
Hope you gets some rest from water duty when the fountain comes in!

Had a boy kitty with asthma and a collapsing trachea. He had to drink from the faucet with his head up. His name was Sandy Red Tigger. He understood and said lots of words, hung-ree, want out and want 'er... hm water. He called water 'er. Really funny since to him the first part of Water sounded like the verb Want!

Unknown said...
This comment has been removed by a blog administrator.
8:44 AM

Well Fair Dinkum as some Australians would say (but not me) I think it is time to call in the Cat Whisperer if there is such a person. I don't know what you have done to deserve such bad cat behaviour.

Pookie we hope you will stop being a terrorist before the cat fountain is delivered or poor Gattina will be going frantic.
Luv Hannah and Lucy xx xx

Here, my four cats have their maniacs too!
And they are soooo punctual too!!!

I know all about it. I lived with a feline terrorist as well. So tiring. But I loved him so incredibly much.

That is the natural order of things here, too. ;)

We hope the fountain works well for Pookie. Moosey and Zoe both love ours. Gracie thinks it is okay.

So glad back to blog to see your cat stories~!
Hi guys!!!