None of my darling cats are interested in Christmas ornaments or decorations. 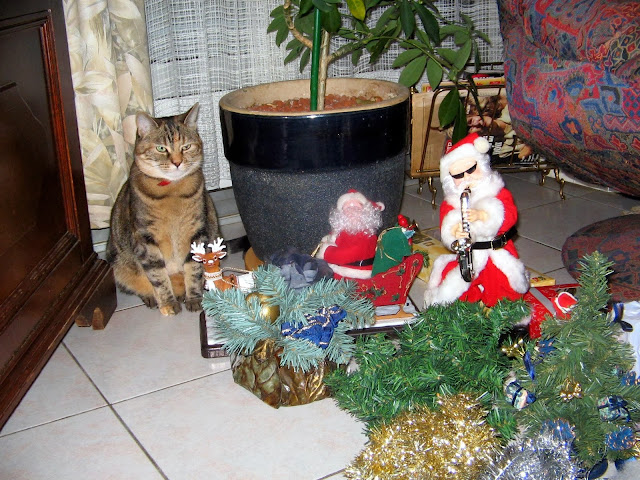 Pookie had a quick look on all this stuff and then went away, The balls and angels were of no interest to her. 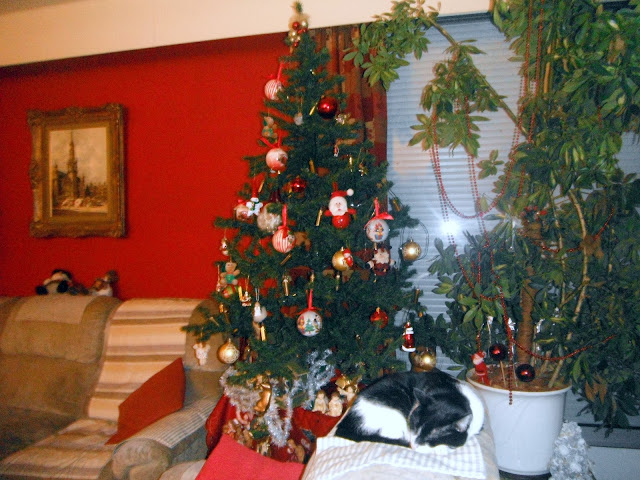 Rosie too, completely ignores the tree and hasn't tried once to catch a little Santa Claus and  taken him for a mouse. Usually she also prefers green mousies. 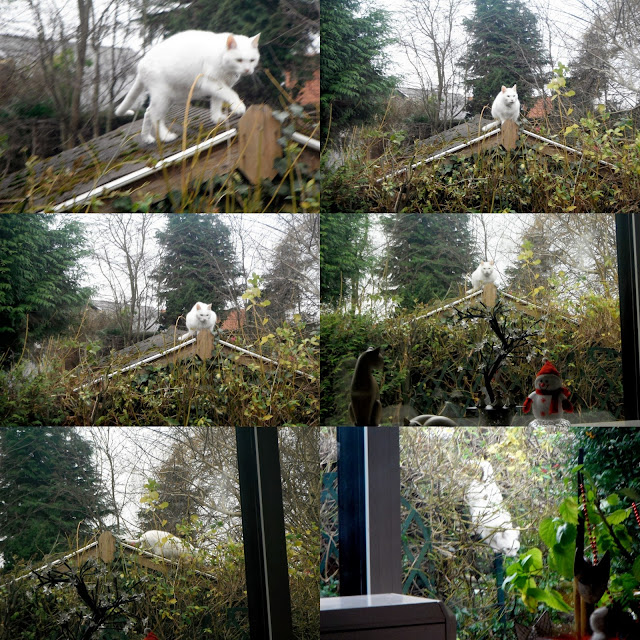 Arthur has found the place to watch me and the Christmas tree from outside, on our neighbors garden shed. 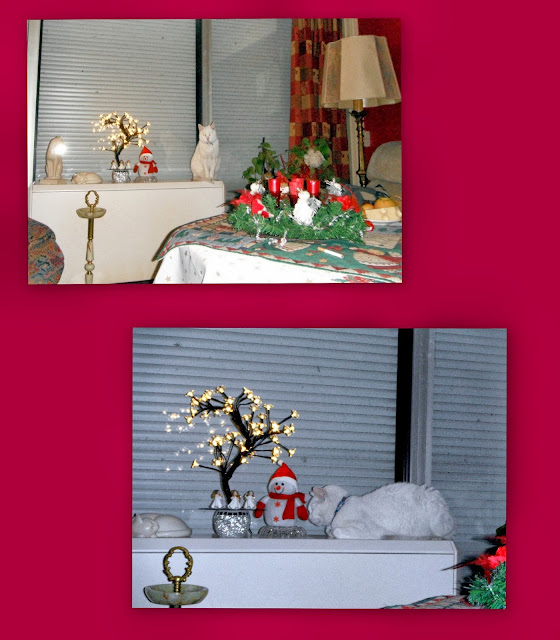 He likes to sleep besides the snowman on the radiator, fortunately it's a snowman who doesn't melt but changes colors !

My neighbors went to France for the holidays and as usual we take care of their cat Chouchou. He is a cat who mostly lives outside and doesn't like inside life at all. He has a spacious doghouse and warm blankets in it. Normally there is no problem at all, we feed him in the mornings and evenings, he is a good cat and eats it all. But this time he had to take medication which I should add into his food. What I did. But he didn't eat at all ! Not the first day, not the second and not the third. I started to worry very much about him and finally called his vet. 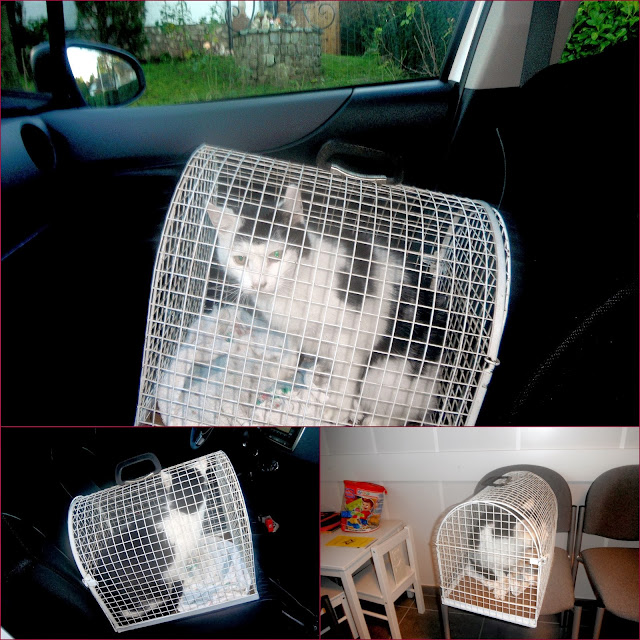 Chouchou didn't protest at all when I put him in the carrier, which is rather strange for a half stray cat. He didn't say anything while I was driving either. I had spoken to the vet who knew him very well and that's why he asked me to come he would give him antibiotic shots. Poor Chouchou has a tumor in his mouth and can't eat. The antibiotics should help to heal it, and it helped, but apparently it had come back again and he couldn't eat !! What a stress and that in the middle of Christmas preparations. Chouchou got two shots and I hope he will eat at least for the next two days so that I can put his medication again in his food. Although it's not my cat I am very worried. The worst what could happen is that the vet would keep Chouchou with him. If I can I want to avoid that, because it must be awful for a cat who is used to so much liberty to stay in a cage for a week ! Wish me the best !

I think Pookie is sitting judgement on your decorations and judging them poorly. Rosie is so bored by them she fell asleep and Arthur thinks the shed roof is more interesting. Kim must be hiding from all the fuss. I think Toby might like all your efforts.
Poor Chouchou I hope he is better soon.

I am sending lots of purrs to Chouchou! I hope that tumor goes down soon!

We are sorry you have to get Chouchou to take his medication and hope it all goes well and his tumour is not too ouchie for him. Arthur seems untroubled by your dilemma with Chouchou.
Happy Christmas wishes to you all.
Luv Hannah and Lucy xx xx

That's so pawsome that your kitties don't bother your decorations!

We're sorry poor ChouChou doesn't feel like eating. We hope the shots will help him feel better and he'll start eating again. Poor little guy. You're so good to try to avoid keeping him at the vet. We're sure he appreciates that!

We sure hope everything turns out okay for Chou Chou. We are sending purrs!

Our cats do not play with the ornaments, either. I guess we are lucky like you. :)

Merry Christmas to you, dear friends. Sending you much love, and wishes for a holiday season filled with peace and joy.

Oh how kind of you Gattina to help keep Chou for the holidays! I bless and wish your kind heart all the best!

As for your lovely cats, they all look happy and contented, Christmas or not ;-)

Hmp, I don't know what the hoomans like about holiday decor too. They don't smell and look edible.