The highlight of this week, was taking Kim to the groomer ! To catch her and put her in the carrier is real hard work, which leaves us red faced and breathless when finally she sits in the carrier. 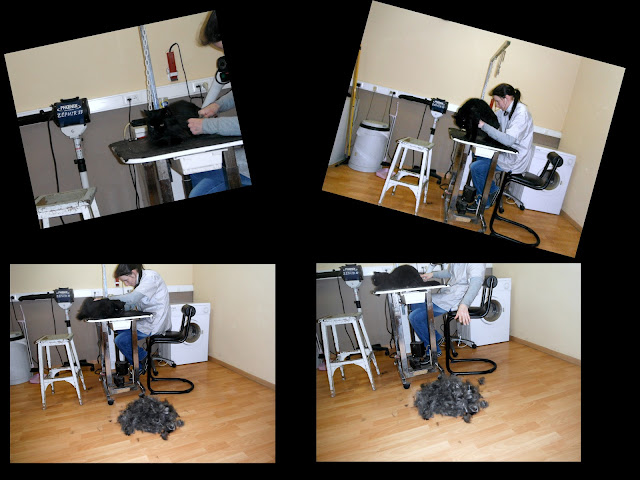 She sang the whole way long like Celine Dion, only a little false. But once on the table she is happy ! She purrs and makes pasta with her paws and is very patient. 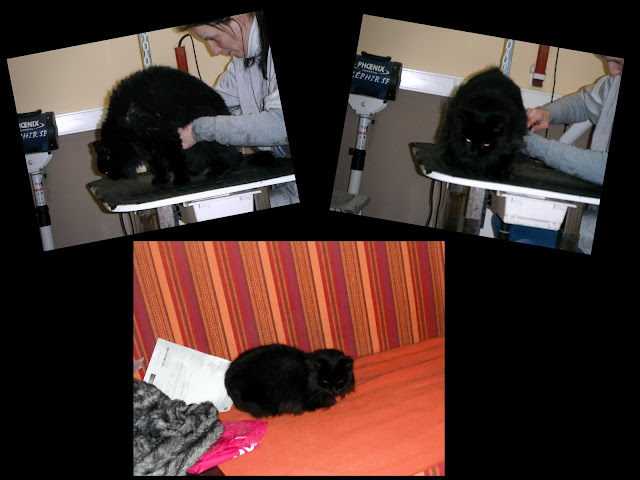 Isn't it unbelievable how much hair she produces in only 3 months ? I am convinced that she was a sheep in her former life. 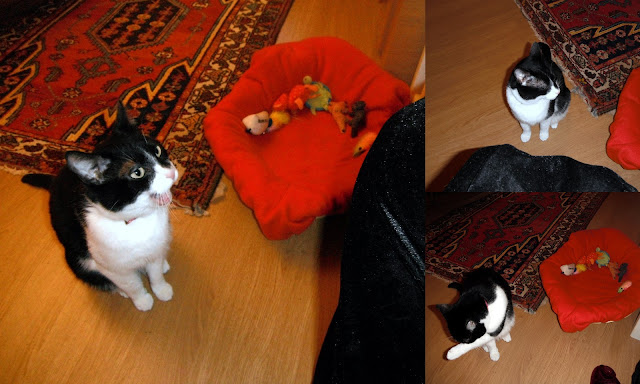 Due to the bad weather, Rosie keeps herself busy with her mousies ! She carries them around and throws them in the air and runs behind. And she also still gives them a bath each night ! 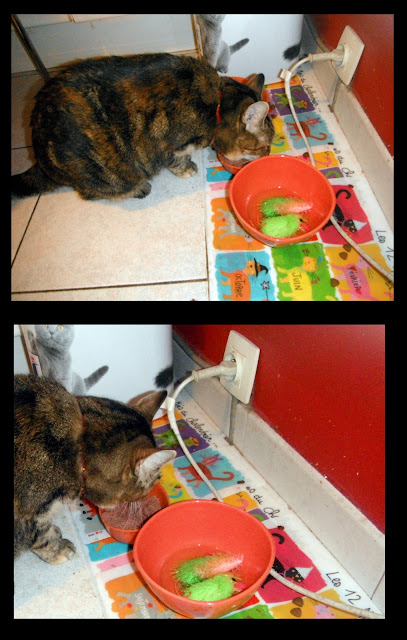 The last days I found the fat once swimming in the water. I also made a scientific discovery ... cat's are not color blind ! She only bathes her green mousies, never the red, yellow or black once ! Green must be her favorite color ! 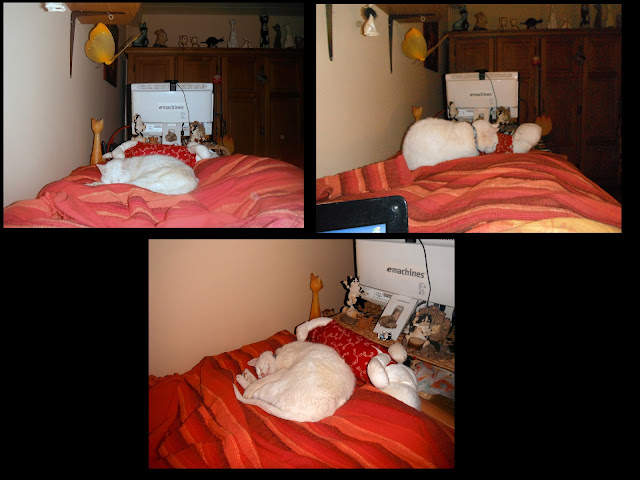 Arthur takes forces for the hopefully arriving spring ! He spends his days mostly sleeping on my bed, 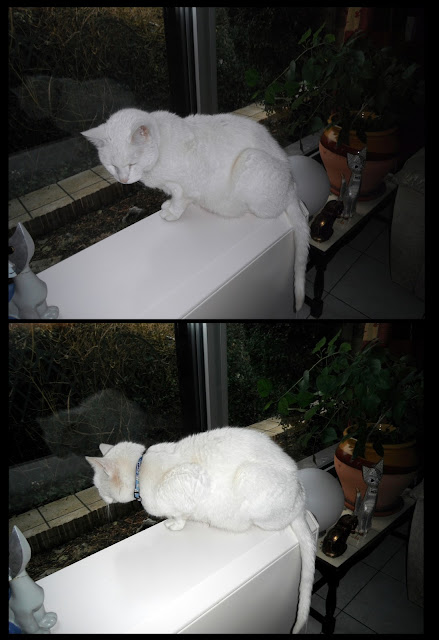 or watches birdies through the window, 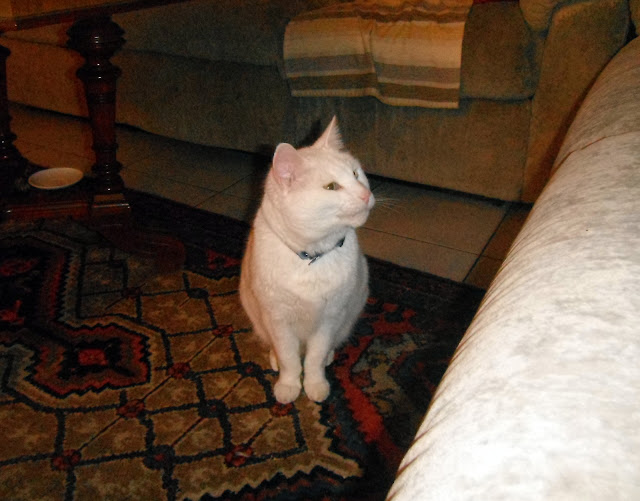 when he is not asking for food !

He is supposed to be a shorthaired cat, but still managed to produce two big knots on his back near his tail. We tried to cut them off, which was quiet a comedy. I wore garden gloves and hold him up and Mr. G. tried to cut the knots out of a struggling angry Arthur. Arthur is a good tempered cat but not when it comes to his fur ! There he shows his claws. Mr. G. managed to cut a bit, but it's not perfect and we have to repeat the whole procedure !

I bet I would love to be groomed! But yeah, like Kim, I would totally hate the journey.

I just love the way you describe about Kim~ Hahahaha~~ So classic!!

Hahaha. My clients say the same thing about their cats when they drive them over to me for grooming. LOL!
Maybe you could get a pet clipper then shaving off those mats on Arthur would take just 10 seconds. :p

Hahaha, we think Arthur's too fat to reach those places on his back to clean. Whether long or short fur, our human will comb us daily; a longer time for longer fur and a few strokes for short fur. Purrs!

OMC ! Me and Mom roll on the floor laughing how you explained your kitties' situation...Ha..Ha..Ha
I don't heard much about Kim but this post, she is a super star !!! Well, She sang like Celine Dion : )..tee..heh

Kim we hope the groomer didn't steal too much of your fur while you were singing.
Luv Hannah and Lucy xx xx

Maybe it's only the green mice that like to swim. That is pretty strange that he puts the mice in the water bowl, but only the green ones! Interesting. We do not go to the groomer, just the vet. That is enough!

What a cute post. Love the green mousies in the bath. Too funny! My cats love to be groomed, too but only by me. Oh that Arthur...I want to hug him. Have a nice day. Deb

Woof, did they make carpets out of Kim's furs, Gattina?

Or maybe stuff them to make new mousies for Rosie?

OMC ! So much fur !!
I agree with you that Kim must have been a sheap in her former life :)
Me too wash my mousies efurry night , never mix colours either !
I long for the spring too !
Today we have sunshine but the wind is really cold *brr*

Goodness does she have any fur left?
Love the washie Mousie routine!

Oh my, that does look like a lot of work to keep Kim groomed! Rosie is so funny with her mousies.

You should look into spinning Kim's fur into yarn and knit something out of it! Or crochet. I used to work at a fiber mill and they made all sorts of fur/hair/wool into yarn including a certain dog breed.

The mouse washing is too funny. Not sure if the green ones are her favorite, maybe she is trying to drown them? Our cats don't wash their toys, at least not often, but they prefer red toys over any other color.

Wow, look at all the fur that came off of Kim at the groomer's! We bet she feels much better now.

Arthur, you sounds like our Moosey. He is very sweet-natured, but he HATES being brushed.

Rosie, I wonder what it is about those green mousies? Why do only they get washed?

Pookie, we hope someone took those mousies out of the water, so that you can have a drink. :)

kim's such a silly furball *sorry for the pun*