This weekend was less stressing for my cats than I had thought. Grandson Toby with Daddy were on visit.

Kim had chosen a new place on the sofa just under the painting of the Grand'Place in Brussels. 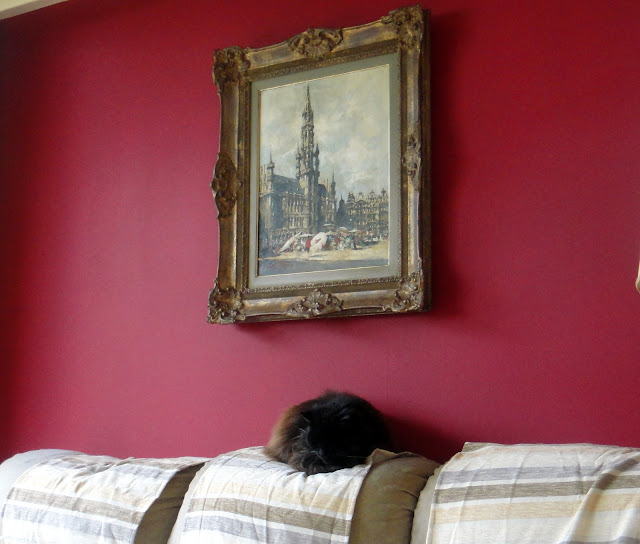 It was the first time that she slept there since she arrived in our house. She didn't know yet what would come !

Pookie's instinct told her that there is something wrong, the rugs had disappeared and also the cat statues, and decorations, strange things were laying around which she had to inspect. 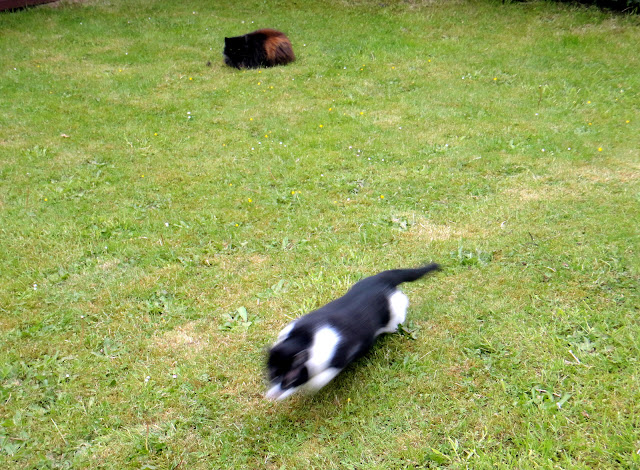 and then it happened ! Strange noises came from the house ! Alert ! a mini human was approaching !
Rosie escaped into the house like a flash and Kim disappeared for the 2 days our visitors were staying ! She only came in at night for food. 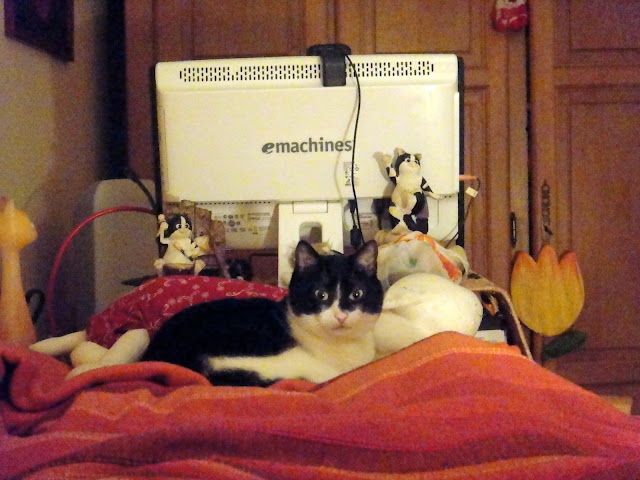 Rosie was offended, she doesn't like mini humans, they are noisy and try to pet her. She stayed in my room, but came out sometimes into the yard, to observe from far what was going on. 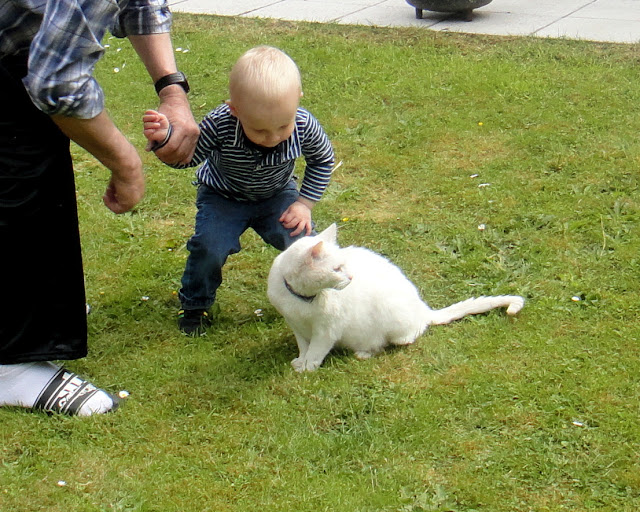 Only one cat wasn't bothered at all, Arthur of course ! He stayed cool and allowed to be petted. Toby was introduced to Arthur with the recommandation to be sweet and not to scream, and don't slap him, but pet him softly. 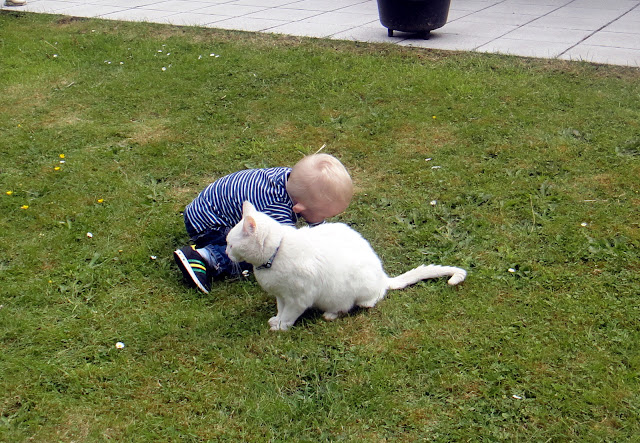 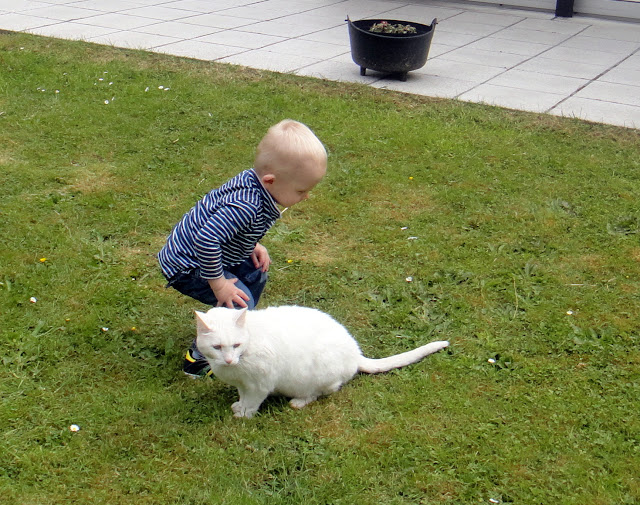 The result was this, they were very cute together. Only once Arthur hissed, Toby probably was showing his love too roughly, but this was the only time during the 2 days. 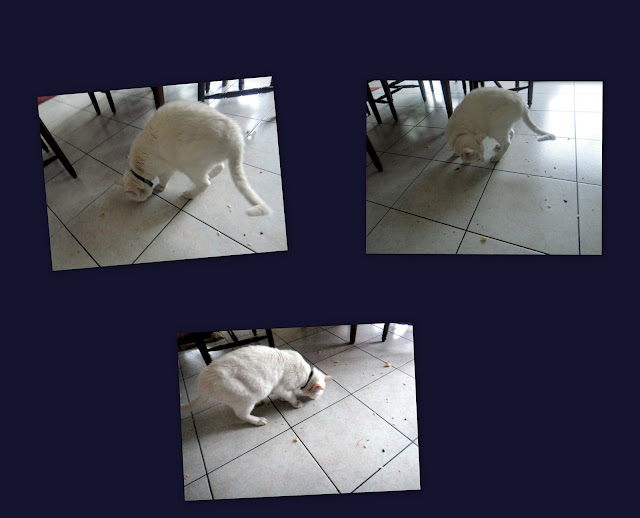 He actually loved this little guest, because he throw food on the ground and helpful Arthur cleaned it off, taking himself for a vacuum cleaner.

But that wasn't all. One morning I heard strange noises coming from the kitchen, I ran there and what did I see ? Arthur with a big croissant in his mouth running in the garden ! 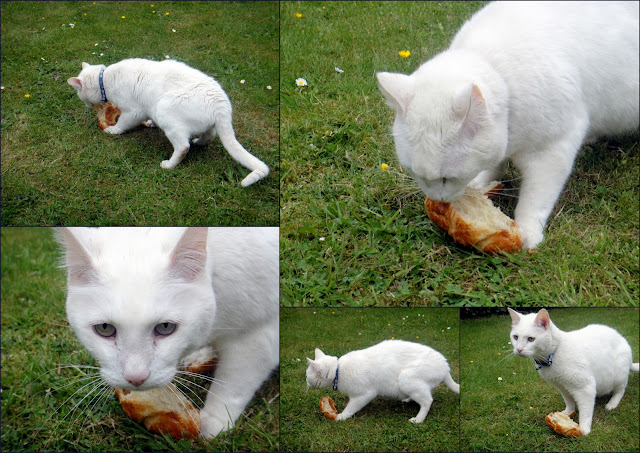 Where he ate it with gusto ! He watched that nobody approached him, he didn't want to share. The few crumps he left were later eaten by a crow ! Now waste in this house !

Now the calm is back again and everything returned to normal life.

If you participate, please leave your link here

That was very nice of Arthur to teach the mini peep about kitties, and it looks like he got a sweet reward! Good thing our Mica Minnie Moo wasn't around, he would have had to fight her off. She loves carbs!

How did I guess that Arthur would figure out the benefits of having a human kitten around? Rosie looks REALLY put out!

Oh oh. Rosie really don't like the little humans, eh?
Arthur and the croissant made Mommy laugh and laugh! What a cheeky boy!

Well that was a stressful weekend for 4 cats. Kim is pretending to be a ball of wool on the back of the chair. Pookie wants to run but doesn't know which way. Rosie is running like a streak of lightening then looking saucer eyed on the bed. Arthur is trying to be brave, then attacks a croissant. Get used to the cute little human all cats, he will only get bigger, faster and louder but he will always be kind to cats.

Toby and Arthur are great friends, it's adorable!
I love your new spot choice dear Kim, I think it's cozy and I would love taking a peaceful nap there.That painting is elegant!
purrs and love to you all,
Luna

Wow, that one picture of Rosie running is great ... she is like a black and white flash! :)

Kim, Pookie and Rosie do what our Moosey does whenever we have visitors. Arthur does like Sammy.

Toby and Arthur are very cute together. And that croissant is some great reward for being so brave and friendly, Arthur! :)

The photos of Arthur and Toby playing together are very cute. I like seeing cats and kids together :)

But it can be stressful for the cats - I know Luna finds a deep hiding place when kids visit here.

That Arthur is a trooper. He deserves his croissant!!

I agree wiff Austin = Arthur sure deserved that Croisant after the weekend with the mini-human ;-)

I think Arthur looks so cute with the croissant in his mouth! My cats also love bread!