CATS ON TUESDAY
For once most of this post is concerning Kim ! I had to take her to the groomer it was more than necessary. But as she is an autistic cat (I am sure of that), very intelligent but not social at all with humans. She is mostly outside not far, but when the weather is bad she comes in around 10 pm and sleeps at Mr. G's feet.

On the night before, we were both nervous and waited that she would come in. At ten she appeared and went to bed with Mr. G. I quickly shut all the doors, put a litterbox, food and water in the guestroom, and then returned to pick her up which of course was impossible. But she had felt something strange her instinct told her that there was something unusual going on so when she saw me she disappeared like a flash downstairs to get out of the house. Instead she found the door closed, ran into the guestroom and I quickly closed the door. We both pushed a big sigh of relief, she was inside !

Next morning we tried to get her out of the guestroom into the staircase where she would be trapped. I finally had to use the broom to get her out of under the bed ! Finally with a lot of desperate meows we managed to push her into the cage. We were exhausted ! 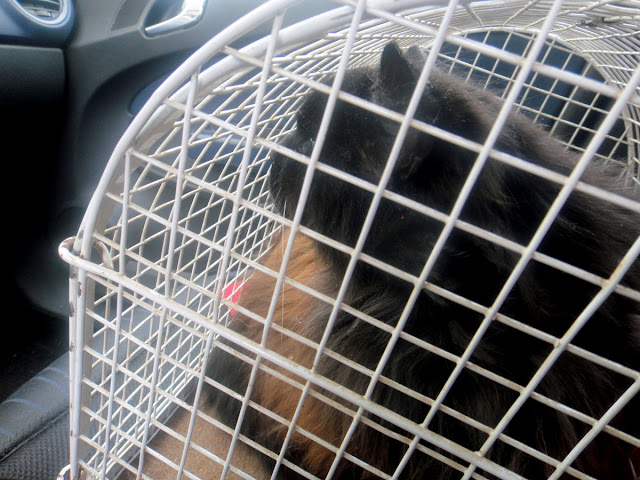 Kim not very happy in the cage, "sang" the whole way long in the car until I arrived ! 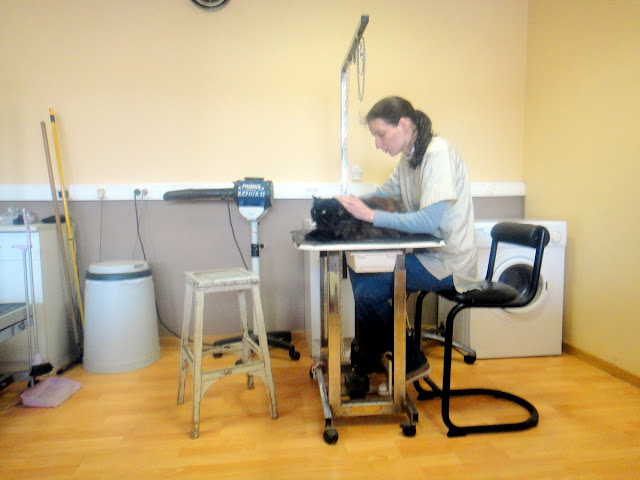 And then happened (as usual) something very strange. Sophie without any problem took her out of the cage, put her on the table and started working on her. And what did Kim do ?? She purred and purred as if she would get payed for ! 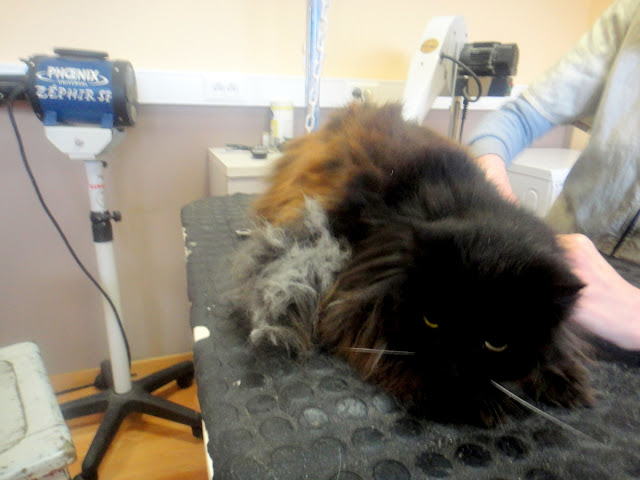 A big knot is hanging out here 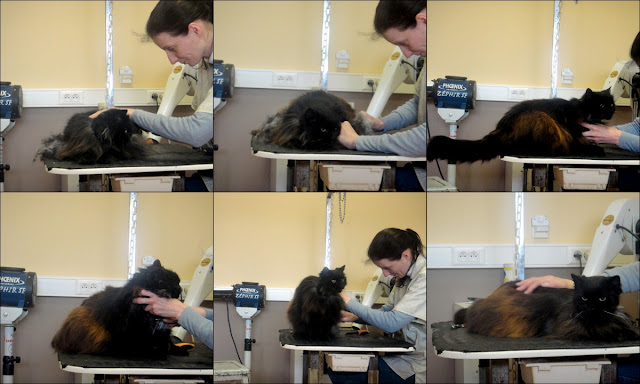 and then she was the best and most friendly cat in the world. She continued to purr, made pasta with her paws and stroke her head on Sophie's hands. Things she has never done with us ! It was offending ! 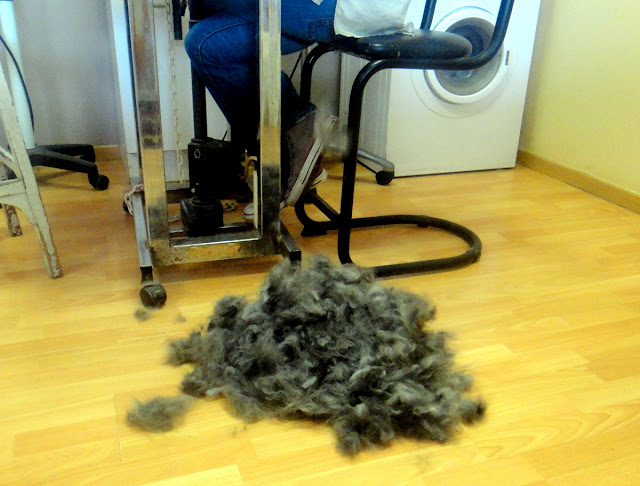 and this was the result, after nearly one hour of grooming an extraordinary patient cat ! Apparently as the winter was so cold the animals had more hair. It was enough fur to make coats for 3 naked cats !

As soon as we arrived home, she jumped out of the car and disappeared in the garden, and we only saw her in the evening again. 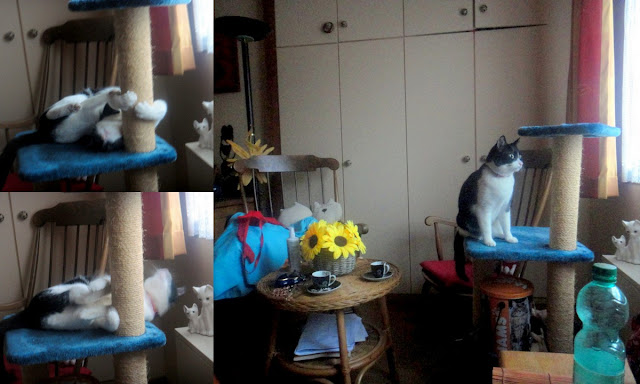 Rosie checks the weather after having done her morning gymnastic. Besides that she has catched a mouse again, and has put it with care into Pookies bowl, nothing special happened. 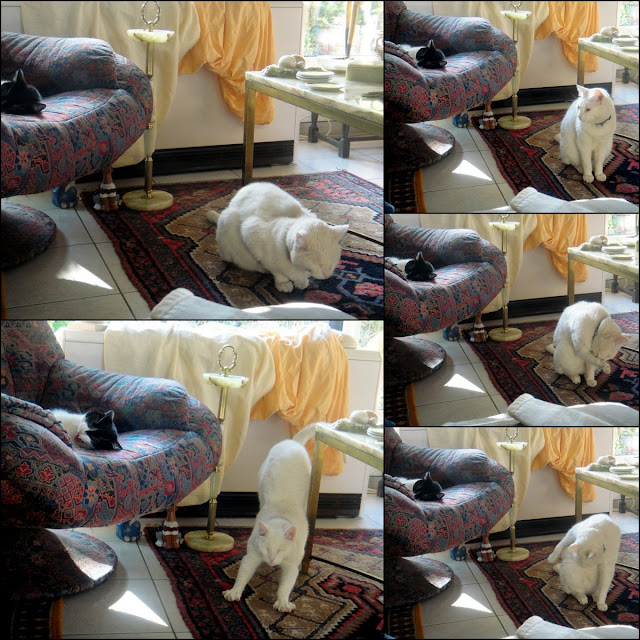 Arthur who thought he had slept enough and wanted to go out, did his morning cleaning and Yoga exercises, and then stated that it was raining, 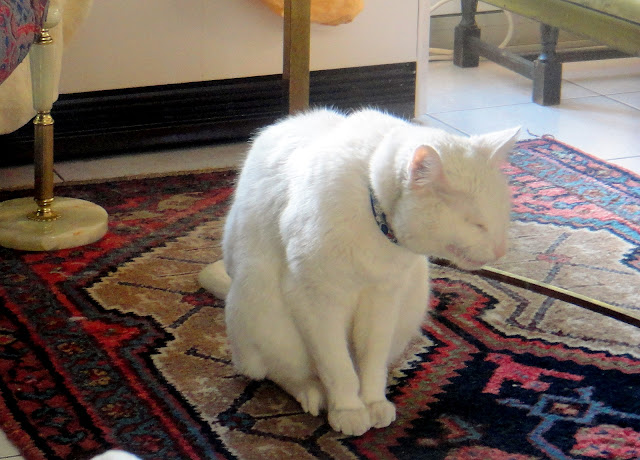 which made him very angry ! You can see it on his face.

But as he is a philosopher, he just thought he could keep company to the cushion until better days !

Pookie, rain or not rain, as volontary inside cat doesn't care about the weather. After having mistreated with energy,  the sofa with her claws, she collapsed on it for another napping round.

Please leave your link here and visit each other !

I can't believe how much fur came off Kim! Isn't it always the way that they undergo a complete personality change for other people?!

That was more fur than my human got off of Boodie to make Cousin It!

That's a LOT of fur that came off Kim. I'm sure she must feel a lot better now that the knots have been removed. :)

A very funny post! What more can I say? Except sorry about the rain Arthur and Kim at least that is over for another year. Just think of the cost to MrsG financially and emotionally of making you beautiful again Kim.

Wow, you got a hole new cat there. :-)
Have a nice day.
Inkan and The Ligue

OMC !
I think all that fur from Kim would have been enought to cover at least 5 naked cat´s *MOL*
Here it has been raining too , makes me angry too , just like you Arthur !
I have not seen a single little mousie here , Rosie :(
So I conCAtulate you on your catch !
Pookie , me too think the sofa is one of the better place´s too nap in :)
Have a great tuesday !

wow Kim, I'm impressed about your fur!
I think now you are light and it's great if the weather changes and the Spring arrives with delicious Sun!
Luna

Here is my blogadress
www.inkanochligan.se
If you click on my name under number3 you see it also.
Hope you find it. :-)

We were so surprised to see a post almost all about Kim! It is amazing that she was so well-behaved (and affectionate!) at the groomer. We are sure she feels much better now without all those knots and mats.

We are very impressed by Rosie's gymnastics. Quite a workout!

And Arthur, we are sorry, but your angry face made us smile. :)

Pookie, we like your consistency. We hope you had a wonderful inside nap.

Hugs to you all!

That is the MOST floof I have ever seen come off a cat! EVER. Kim must feel wonderful now!

So much fur. I had a long haired (large)black kitty, we would get mounds of hair from her too!

I'm joining for the first time!

Kim clearly has a fine sense of revenge: she made you look sooooo silly and just with a purr :-)

So glad she's OK and not freaked out by her trip to the hairdresser. Hope you have recovered too!

Purrs to your little rascal Rosie and her mousies and Arthur the handsome hunk.