At this time of the year my cats activities are really reduced to a minimum if ever this is possible ! 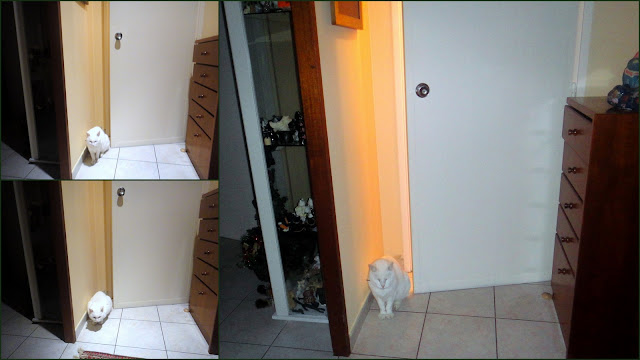 After having cared for Mr. G. when he had his flu, Arthur takes care now of his digestion and waits patiently at the door, to check if everything is OK. 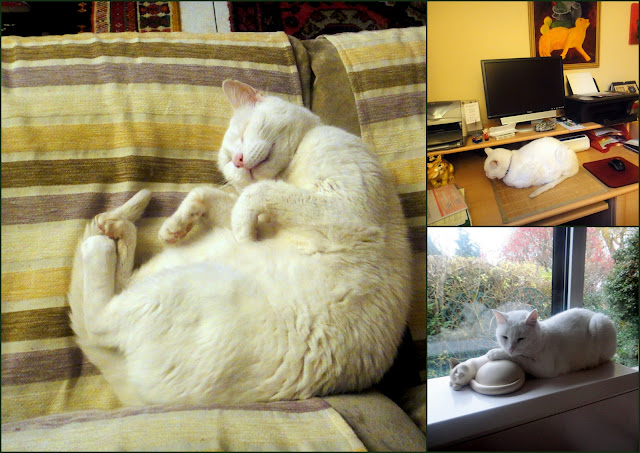 Then he returns to his most tiring activity choosing a place to nap, which is very difficult for him and demands a lot of effort. 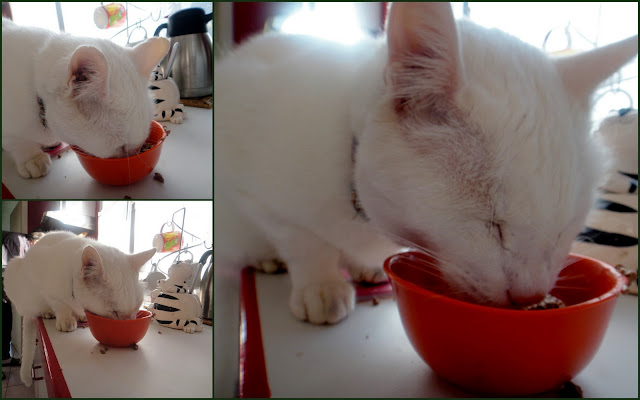 and when he doesn't sleep he has his head in the food bowl. Since he had his stomac troubles he now eats like a horse, fortunately he loves the food I buy now which is half of the price than the famous "Hills" food ! 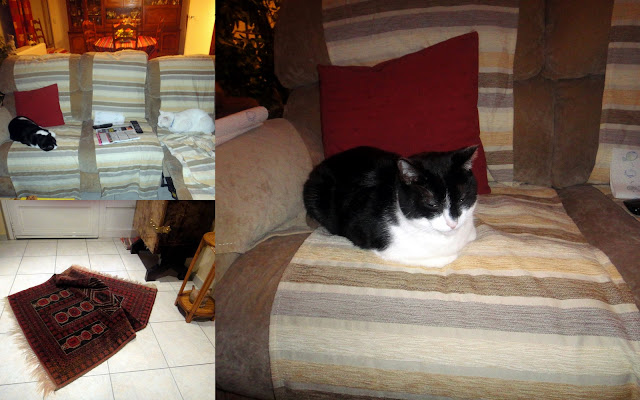 Rosie each morning runs through the house and and puts the rugs her way, which is not necessarily mine. When Arthur is too lazy to play, she also starts her daily nap, after having messed up the whole house (or nearly). 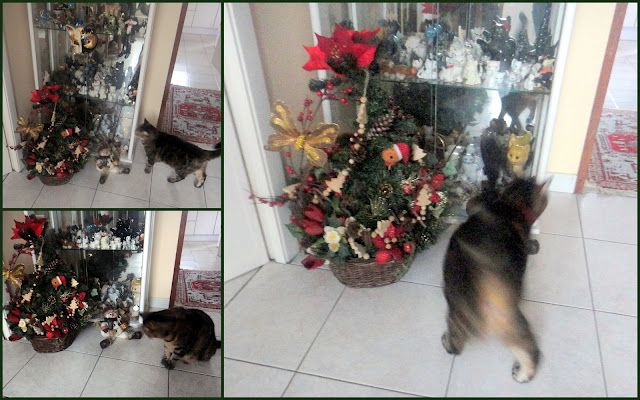 Pookie freed of her nurse job, is not so happy about this thing standing at the entrance.

I thought if my cats are already so lazy, they could at least model for Christmas cards, to earn their food. Of course they were not always cooperative ! 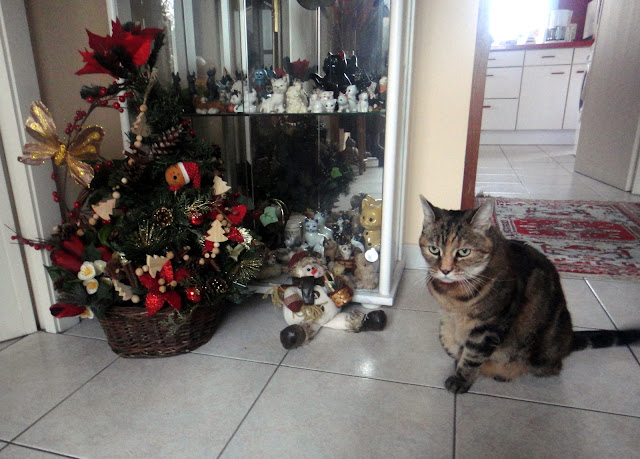 Pookie wondered what she should do 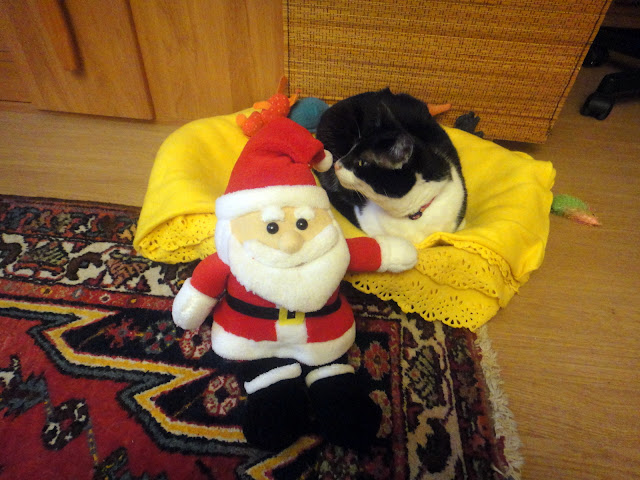 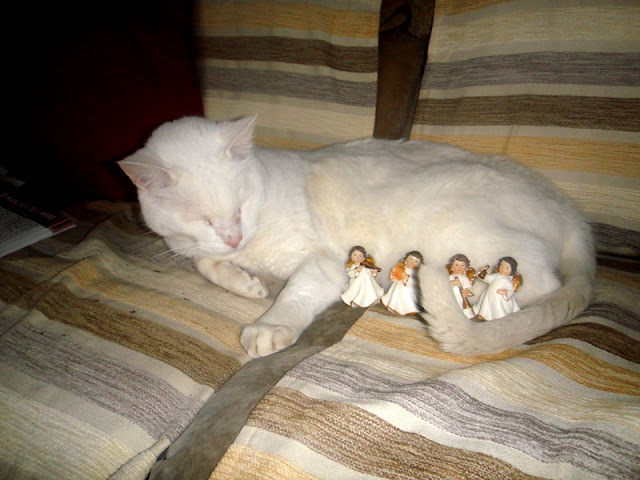 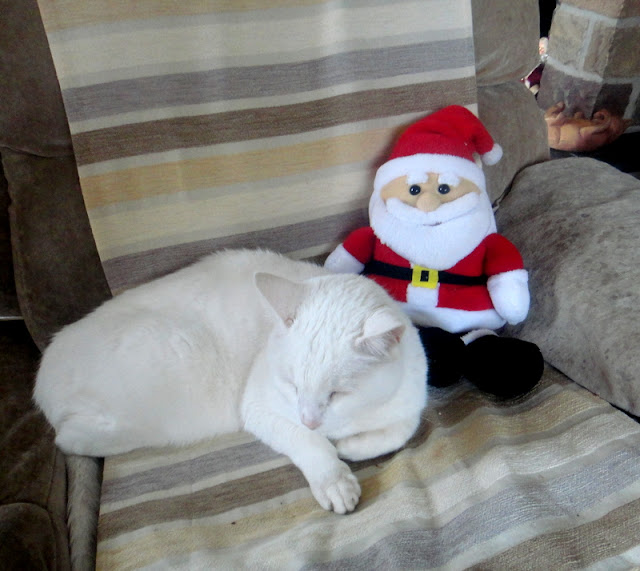 Finally I managed to take one quiet nice picture with Rosie before she ran away. 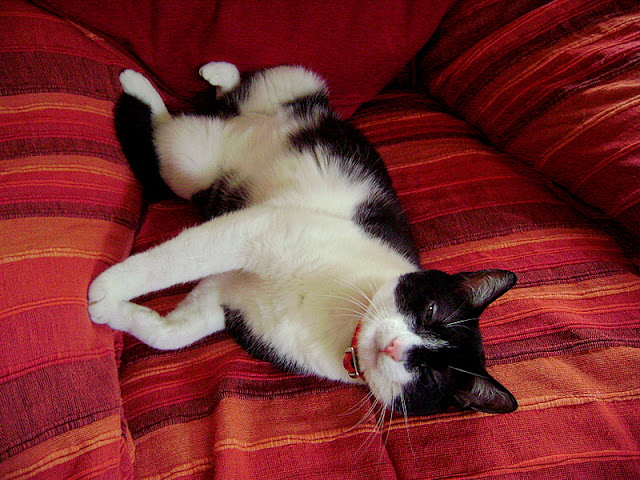 Since yesterday Rosie has a nice job again, as I have catched Mr. G's cold (he is very generous in giving) and she took the nurse job over and stays with me in bed. But if you think she would bring me a tissu for my running nose, then you are wrong !

We're so happy to see Arthur noming again like usual.

Hello to all the kitties.

Arthur's schedule is exhausting! What is Pookie up to with that Christmas tree? She looks as if she's about to attack it :O) I love that last photo of Rosie, she's smiling! Hope the cold goes quickly, I had one over the last week - not fun.

You kitties make us look like slackers! Keep up the good work.

I admire the stamina of Arthur.
He's named after a king and behave accordingly to his royal position. He's a wonderful sight throning in the window sill. White on white on white. Classy.

I think females generally are more the nursing kind.
I can rely on Amdidala jumping into my lap every time I feel exhausted. She also took very good care of my ill mother when she stayed with us.
I wonder what signals cats are able to receive?
They never stop amazing me.

Gattina, it is always funny how you decorate your cats!!!
Arthur is so cute. ...hehe eats like a horse ....

Gattina, the last month I had no time to play cats on Tuesday, sorry. I hope to comment here more the next time and play along one day again!!!

Kitties think everyday should be Christmas for them. Just substitute some nip for mistletoe.

Hooray for Arthur´s appetite !!!
I don´t really think he eats lika a hourse though :)
Do you get treats for putting up with your mom´s ideas about Christmasphotos ??!!
I must take a serious talk with my mom about that !!

We are happy to see that Arthur's appetite is back. I love your post today. I cracked up when I saw Arthur's protest against the nursing angels.

I think our cats would be quite happy if there were always a sick human in the house to nurse.

Glad that Arthur's appetite is back. Looks like he is enjoying himself and getting quite a bit of rest, too.

Yes, this is the time of year to wreck the house, eat and sleep
Kisses
Nellie

We are so glad to hear Arthur's appetite has returned! Even though the cats protest a bit, they did a fine job of modeling for Christmas. :)

Poor Gattina! Hope you recover quickly (but don't tell the cats I said that). So good to see Arthur eating like a pig in fur again. And saving you money too. He is a kind cat. Keep warm1 We're sending purrs.

Cat-attude...just can't beat it!! Hope all is well in your part of the world:)!

I watch with horror when the TV news reported the shooting in Belgium,

They all look contented and besides some holiday images are frightening to my pets as well! ;-)

Oh no, so sorry you've caught Mr. G's cold! It was probably inevitable. All our cats have pretty much become slugs or hibernating bears for the season. And I hear ya on the non-cooperation with Christmas pictures! Kosmo thought the artificial tree trunk could hide him!

Oh, I love all your photos! My cats have been very lazy so I haven't gotten any pictures of them lately. Plus, Mom is so busy!! I am visiting to see what all the other kitties have been up to, though! Glad Arthur's appetite is back!
Cindy, Buster, Rudy and Sam