Last week was a terrible week ! After having read all comments I have got for "Cats on Tuesday", I finally decided not to wait a second more and take the still not eating Arthur to the Vet. 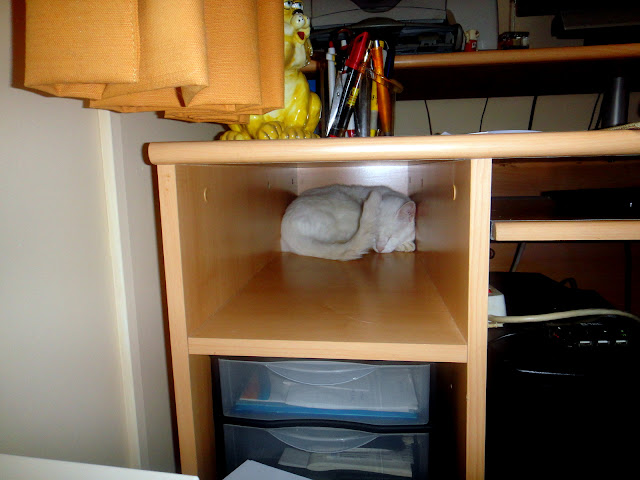 He was hiding the whole day in Mr. G's desk and even his favorite food he didn't eat. He also was rather apathetic and looked sleepy.

In the evening we put him in his carrier and I drove him to our vet lady. During the whole trip Arthur sang operas in all tones ! My head was exploding when I arrived and went with him into the waiting room. There 2 dogs started pulling at their leashes, but Arthur hissed once then took his King Arthur position to make clear who was the boss around here, which made the two dogs lay down at the feet of their owners. 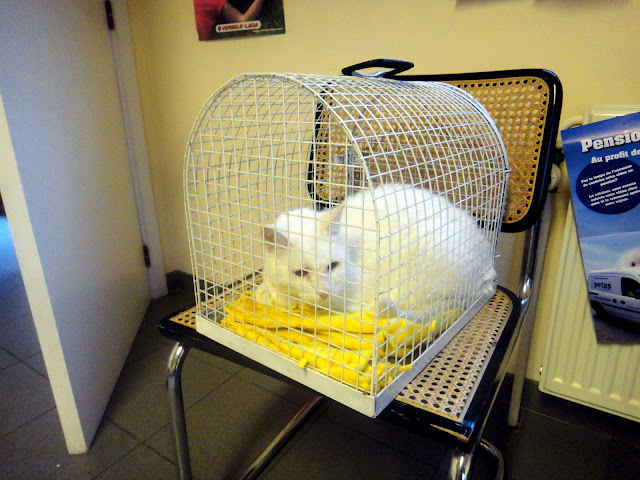 Arthur in his cage was waiting his turn. As soon as we were in the consulting room Arthur changed into another cat. He growled and hissed, I had never seen him like that before ! His ears flat on his head, the mouth open ready to bite and all claws out ! I tried to calm him down and with special gloves pull him out of the cage, but he attacked me and scratched and bit he would have torn off my hands ! I thought I would deal with a wild tiger ! No way to get him out. Finally the vet had to give him a shot through the grids of the cage to put him asleep, there was no other way to examine him.

I was shocked, really, I never ever had believed that my sweet, cuddly Arthur could be such a dangerous cat ! He never had behaved like this before at the vet, it was just the opposite, he was very social and friendly. Probably he remembered the time when his tail was bitten and he almost lost it and he had to stay there for 2 days.

Anyway, we had to wait until he fell asleep. 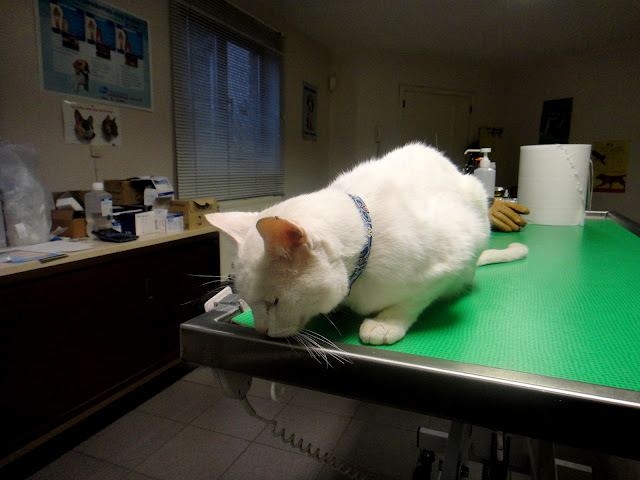 It took quiet some time, we managed to get him out of his carrier, but he wanted to jump off the table. Finally he was still. She took blood and examined his teeth and everything else, but couldn't find anything special.

I took him home still asleep and waited that he woke up again. Now we had to wait for the next evening when the vet would call me to give me the results of the blood test.

It was horrible for me. Each time I saw him laying there I thought the worst. At 6 pm I got the so expected phone call. Nothing special every test result was in the normal limit. So she asked me to come back the next day and she would give him a shot against infections. That's what I did. This time he growled and hissed already in the waiting room ! No way to get him out of the cage. She had to give him the shot through the grids again.

But then on the way back, I let him out of the cage and he settled down in the back of the car. 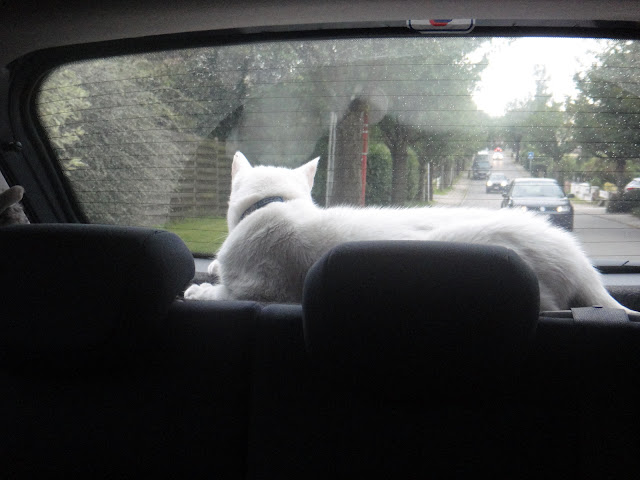 He performed a show for all other drivers and was happy to sit there and be driven around. My normal Arthur was back ! 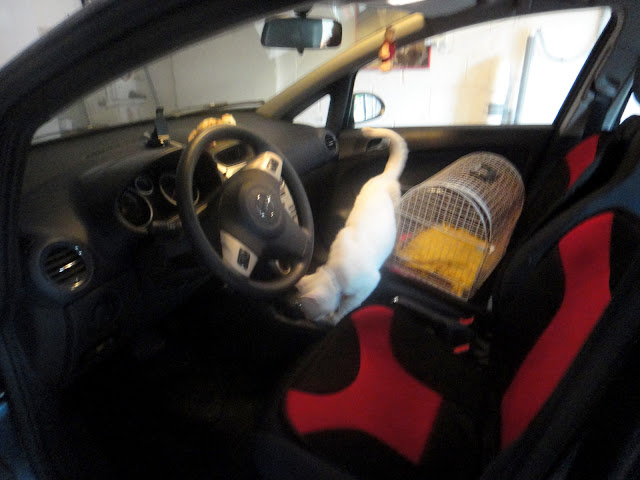 at home he went off the car, rather reluctantly I think he wanted to continue his sight seeing tour. 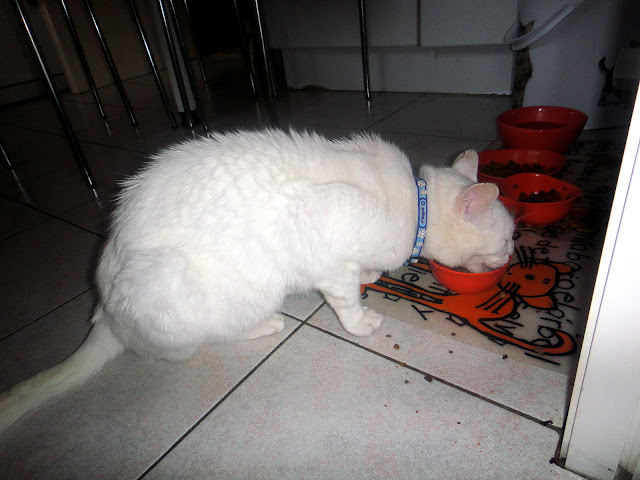 and the next day the miracle happened. He woke me up for breakfast ! that hadn't happened for a long time. And then he ate like a horse ! a whole can of chicken and chicken liver, after that minced meat with an egg. At noon he was again hungry and in the evening too !

During the night he even tried to get into the bin because I found the empty can and other rubbish in the middle of the kitchen ! 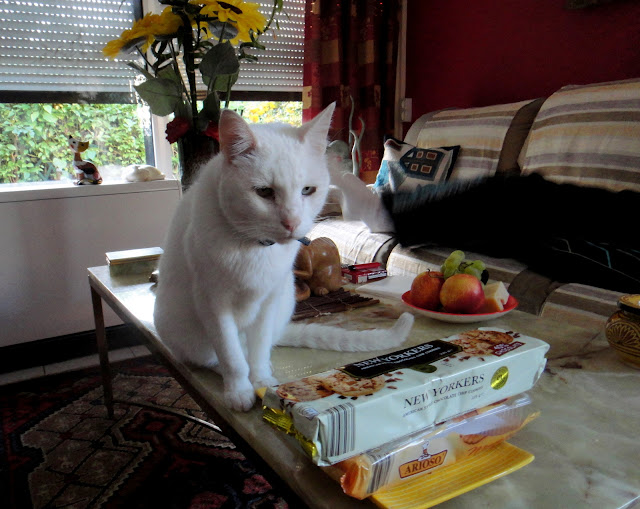 and here he is waiting that Mr. G. starts to eat so he could steel in his plate !!

I am so relieved ! Now I will fatten him up until he is back to his normal weight again. He probably had a stomac infection. Who knows. Unfortunately he can't speak !

Oh my, what a week you and Arthur had. I can't believe how he had a personality transplant and attacked you! So glad he seems to be back to his old self.

I am overjoyed that you are back to normal, Arthur! You must have been feeling awful, the way you behaved at the vet's! I'm glad that whatever they gave you there worked.

Oh Arthur. I certainly never thought you could turn into such a tiger! Poor guy. I'm glad you're eating again and I hope you get fatten up real nice and soon too!

Bonjour dear Gattina and friends,
It's a relief that Arthur is eating again, I was so worried about him.Poor little friend, I can imagine the stress in that waiting room at the Vet office, but sometimes we need to face it, as when I need to go to the VET office to take vacines ( that torture day once a year).
I'm sending love to Arthur and I'm here thinking of him!
Luna

So pleased to hear you are back to your 'normal' self Arthur and eating again. You had us all so worried. That was quite a performence you put on at the vet's, She was only trying to help you.

Oh thank goodness he's OK. But what on earth was it? How strange! And why all the growling and hissing? I wonder if he had a blockage like a fur ball that he had to pass before feeling better??? Or maybe just a little something that the injection fixed? Weird. But glad it's all good again. Now we hope that you and Mr G recover from this shock too!

What a relief he is better again. His behaviour at the vet I recognize very well. My cat always was very friendly to everybody, but at the vet he changed in a monster. I had several scratches when I went home with him. At the vet he had a
special warning in his history "Angry Cat"!
Give my love to Arthur.

Thank goodness Arthur is back to his old self. It does sound like he had some sort of ailment of the stomach. All of his actions - the hiding, the not eating - point to sickness, after all. Give him a big hug for me!

We are so relieved that dear sweet little Arthur is feeling better. You must have been so worried. We are sending him purrs to help him get his weight back to normal. xx

Hooray! We are so glad to hear that our friend Arthur is feeling better and eating again! He must have felt very sick to act as he did ... that was so out of character for sweet Arthur.

Sending healing purrs and prayers that he is back to his normal weight soon. :)

Oh, poor dear Arthur! I will keep praying that his health will return. Keep us all posted and tell Mr. G. to share his Mortadella!

We're so glad that Arthur is feeling better and eating again! We are sending healing purrs and vibes for him.

It's interesting how his character changed so much at the vet - but cats are quite intuitive and seem to know when something "bad" is going to happen.

What a week you had !
Glad you are feeling better again Arthur and that you eat like a horse :)

Now you can come back and read my ENGLISH post for Cats On Tuesday :)

P.S I have no idea what dad was doing with that dragon in the closet ??!!
But YES it´s good to learn math so I know how many mousies I´ve got ;-)

Oh Arthur how strange that you turned into a tiger while at the vets. I think you were maybe just very scared. I am so glad to hear that you are back to eating and hope that it was just a virus that you are now over. I know how mum worried when I stopped eating. Stay well arthur please... Hugs GJ xx

I didn't have any cat pictures for today but wanted to stop by to see how Arthur was doing. I am happy to hear that he is eating again. My Peanut behaves like Arthur did when we take him to the vet. He has to be sedated and sometimes that doesn't even work.

We are so glad that Arthur has got his appetite back, no one likes having to visit the Vet, no matter how nice a person he/she might be.
Keep a close eye on him though, just to make sure he is really feeling better.

As the Scots would say - "We have a moose loose aboot the hoose" right now, we don't know which of the three brought it in, but right now it is hiding under a very heavy sofa, but keeps nipping out to munch on a crumb even while we are sitting there, Calli just sat and watched it!

Oh, what good news. I was quite shocked by the pictures you showed last week. Had all kinds of black thought. Must have been a good medicinal compound in that vet shot.

We give our cat medicine against worms 4 times a year since she is catching mice.
A couple of weeks ago Gunnar found a tick as he combed our Amidala. Looks like it didn't do her any harm.
Best get well wishes to king Arthur.

doesn't matter what it was since his tests all came back normal...the most important thing is he is EATING and eating HAPPILY!

so happy to hear arthur is eating again. what did the vet say?

so glad arthur's better! bet he'll be up with his usual tricks in no time!

hola Arthur! hope you are feeling better. I dont like going to the vet either. Rio from Barcelona

We hope Arthur continues to be his usual self and doesn't revert to being a "mad cat". Does the vet have any idea what might have sent him like that?
Luv Hannah and Lucy xx xx

I continue sending my best vibrations to Arthur!! He will be fine forever!

Hello Gattina,
Mr. Arthur is surely a strong personality. Made me smile a lot that he wakes you up to get an early breakfast. I love his stories and wish you all the best for his soon recovery. I have a cat named Wiski and make a post every Monday. May be you will like it, also.
Best greetings, Johanna