It's cold and rainy again outside and the cats want all to sleep on the radiators. There are only two in the living room. Poor Arthur tried the first one, which was occupied by Pookie 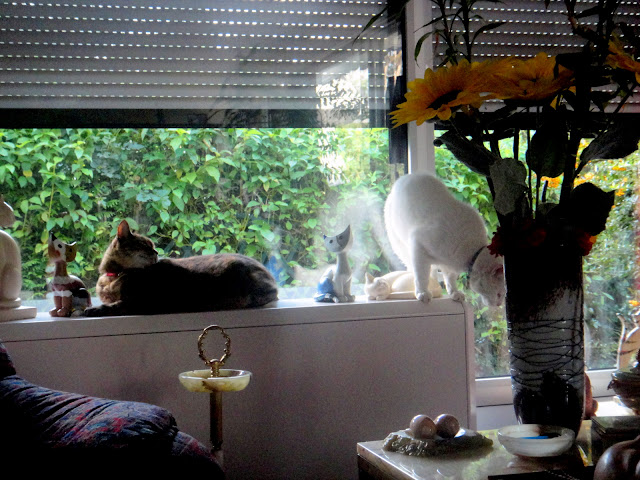 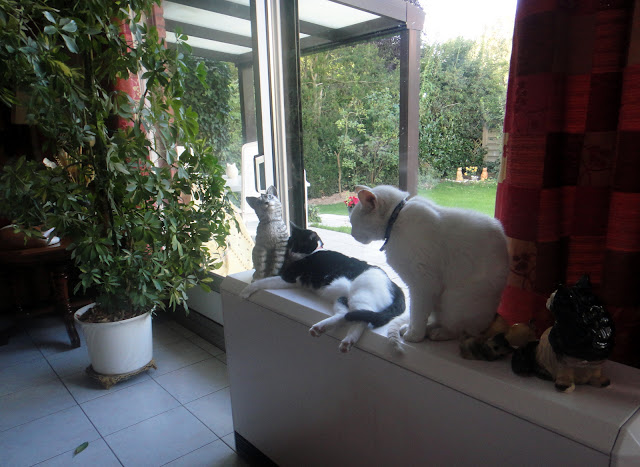 and he had no more luck on the second one, where Rosie lay in all her beauty. Both girls chased him away. It's hard to live in a Harem, thinks Arthur !

He behaved a little strange since a few days, I think he had a serious fight with a neighbor cat. His ear is scratched and he also has something at his right front leg. He hissed when I tried to check. He also didn't eat and I was really worried and thought about taking him to the vet.

At one time we couldn't find him nowhere in the whole house. We looked everywhere and suddenly 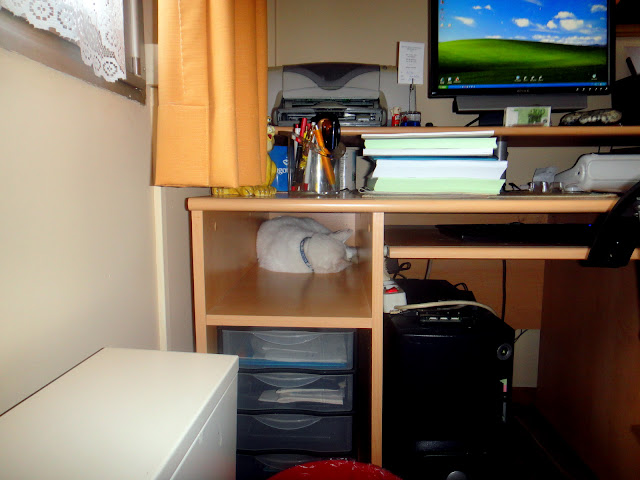 Mr. G. found him here in his desk, he had thrown all the papers on the ground to make himself a comfy space. He slept there for two days ! 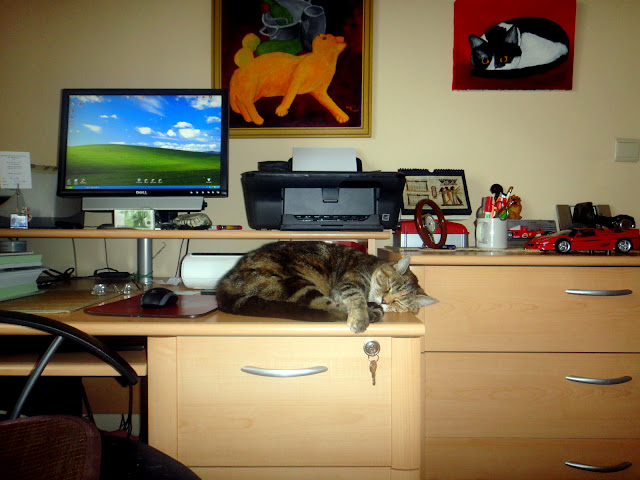 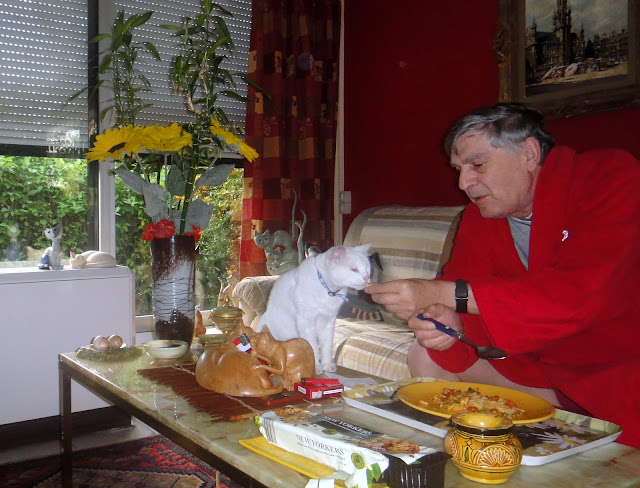 Mr. G. tried to feed him with small meat cubes, but even that he refused. 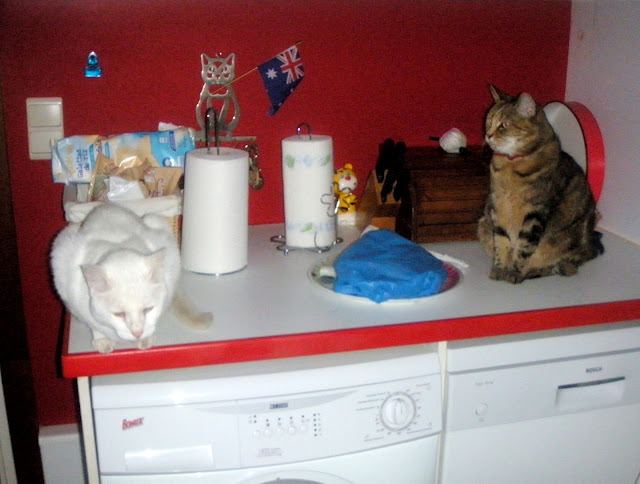 He sat in the kitchen and looked miserable. Nurse Pookie besides him. I tried to give him the diet food of Rosie the "Hills" sensible stomac, and .... he ate, was I happy ! Now he seems to be better and yesterday he stole a big piece of chicken from Mr. G's plate while he was looking for salt in the kitchen. We were so happy that Arthur stole again, that Mr. G' didn't regret his part of chicken. I think Arthur had just to recover from his Waterloo battle. It doesn't happen very often but sometimes he has serious scratches or was bitten, I wonder how the other cat looked like ! 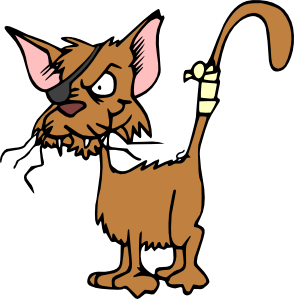 Oh Arthur! Please don't fight. One tiny scratch can cause an abscess and that will send you straight to the vet. And THAT's not good.

I'm glad Arthur is eating again. Please Arthur walk away from fights.
You're too cute to fight.

I don't think linking is working.

Oh dear, poor Arthur. Am glad that he seems to be on the mend, I can't imagine him not wanting to eat!

By the way, in one your photos I got a sneak peek of your garden. It looks lovely!

We are glad that poor Arthur is feeling better now, and we (Jet and Rappy) think he was very clever to tidy up Mr. G's desk by removing that paper. After all, as any good self-respecting cat knows, shelves and cubby holes are for cats to sleep on or in.

If Arthur continues to improve, that's good, but if he has a relapse and starts acting sick again, do take him to the vet. Sometimes these battle scars turn into abscesses. It happened once or twice with the cat before me - she was a fierce fighter!

Dear Gattina, I worry about Arthur !!! cause I used to fight a lots with neighbour cats, and I got bitten at my tail. I didn't let my human touch it and I just didn't eat much and just did lots of nap, Finally my dad took me to the vet and I got infection ! so I think it's a good idea to take him to check up. Paws Crossed and Purrs for him.
xoxo

Pleased you are feeling better and eating again Arthur. Tell Mrs G to put away some cat ornaments from on top of the radiators, then there might be space for 2 cats to share and get warm.

Oh gosh poor Arthur! Maybe he got a "cold"or something like that.This weather is terrible!
I'm happy now he is eating.I hope next time he can share the radiator with Pookie, after all they are good friends!
purrs and love to you all, please take care Arthur!
Luna

We are glad Arthur's better now. Bites and scratches can turn bad and make him sick.
Luckily Arthur has not thought of making space on the radiator by pushing all your cat figurines off! He only thought of pushing paper. LOL!

Perhaps Arthur slept while his boddy was fighting an infection caused be a bitey or scratch. We are happy to hear he is eating (and stealing) his foods!
Luv Hannah and Lucy xx xx

Oh Atrhur , sorry to hear that you have been in a catfight :(
Hope you will be just fine soon !
My mom say´s that maybe it´s a good idea to see the vet so you don´t will get an infection ?!

Arthur, you should Not Fight! That's how you can get bitten and sick. We are glad you are feeling better and back to your thieving ways.

Poor Arthur!!! In the next time stay at home, dear... is more secure of you!
Kisses

Oh Arthur you were gurt. I am glad that you are feeling better. Please dont go out and fight as I dont like to think of you hurt. Hugs GJ x

I'm so glad he's feeling better! Like a lot of people are saying, Arthur can get very sick if he gets an abscess. Plus, he might get seriously hurt. Arthur, you're way too cute and funny to have anything happen to you!

sending you cat purrs to get better soon, Arthur. your friend, Rio from Barcelona

Poor Arthur! Who would have guessed that he's a fighting kitty? he's always so relaxed. Glad he's OK again.

Poor Arthur. Purrs. We hope he gets well soon.