After a cold week with rain, summer suddenly came back for the weekend ! My cat family was happy to be finally able to work in the garden ! 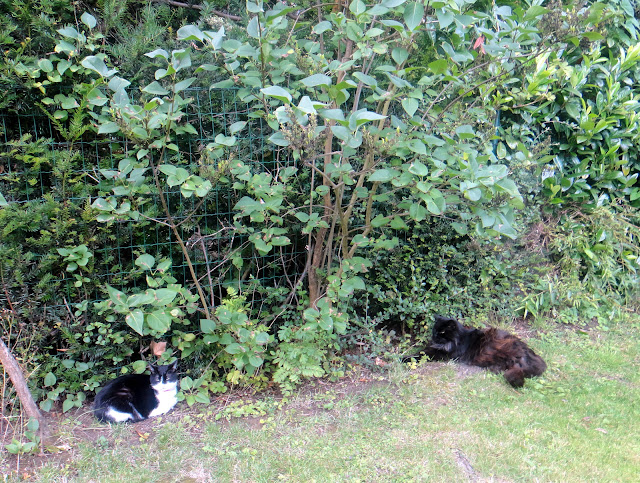 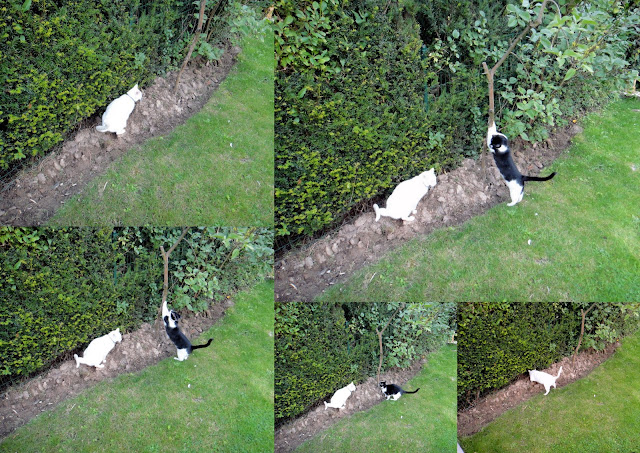 Arthur discovered the freshly spaded garden, thought it had been made for him as a new huge outside litterbox and immediately tried it out, while Rosie more elegantly did sharpen her claws and watched over Arthur's digestion.

But then suddenly their peaceful outside life was very much disturbed ! 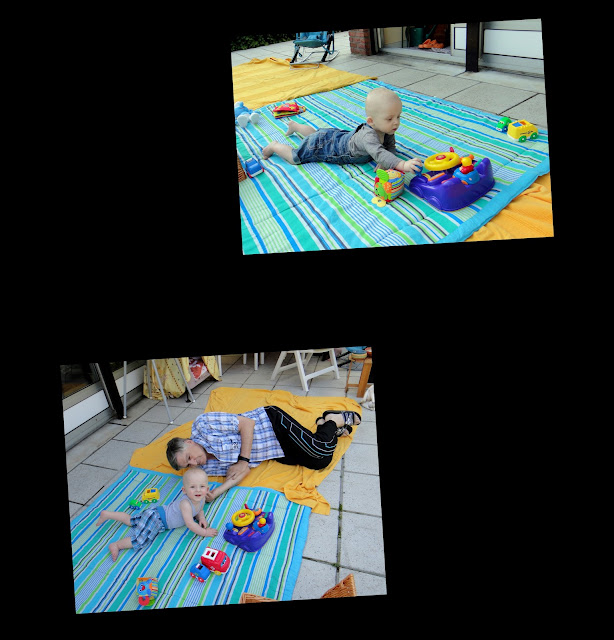 The culprit was little grandson Toby, making a lot of strange noises and a Mr. G. who behaved very odd rolling on the floor with this mini human. 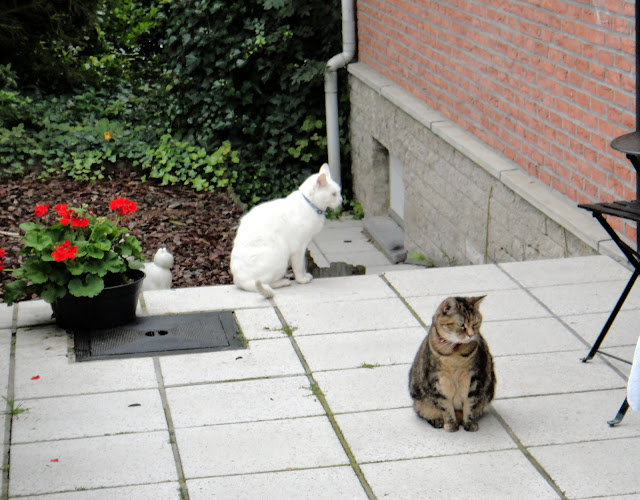 Arthur and Pookie had a discussion together and decided it was better to hide, because Mr. G. was in this very doubtful state and even had forgotten Arthur's Mortadella which really is a crime ! 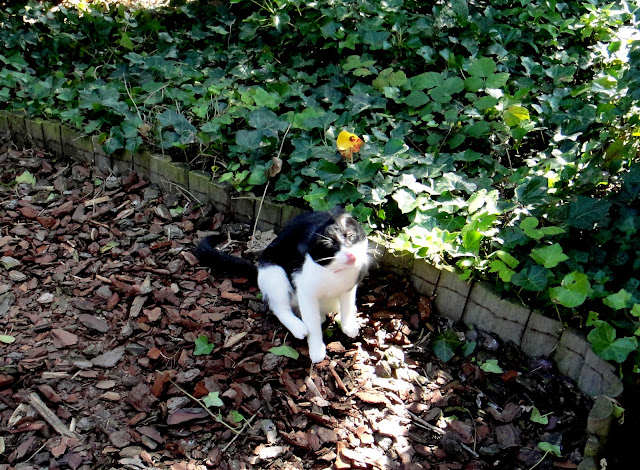 Rosie had disappeared and I finally found her in the "jungle" besides our house, well hidden under the bushes. She just came out to tell me that she would wait with the others until this strange noisy mini human would leave the house and Mr. G. becoming "normal" again, whatever that means !

That's why I don't have any pictures of Toby and a cat !

Please try to comment on at least 3 of other participants before or behind your own link.

Humans get weird when there are human kittens around! This is just more proof.

forgetting the mortadella is really serious.

I hope Mr G has stopped acting so weird and got back to being the good cat slave that he usually is!

Bonjour sweet cat friends and dear Gattina!
wow so nice to be here enjoying your adventures!Mammy Léia is still suffering from jetlag, poor mammy!I'm trying to help her sleeping by her side!It was a lonnnng way from Brazil to Luxembourg.
****Toby is adorable, cute boy! :)
Happy Tuesday for you all,
purrs
Luna

hola from barcelona to Rosie, Kim, Arthur and Pookie! hope you get your mortedella cheese treat soon. Rio

LOL! Arthur never let go of an opportunity to use an outside toilet!

Rosie, I would do the same as you do. The Babay is too scary !!!
Hugs
xoxo

Mr G looks so cute rolling with Toby. LOL. Glad the kitties got to play in the garden over the weekend.

We ALWAYS hide away from mini hoomans ~ it's the sensible thing to do.
Mr G made us laugh today though!

WHAT ??!!
Mr G forgot to give Arthur his Mortadella ??
That sure is a serious crime !!
This weekend we had summer in Sweden too :)

So nice to see your cats working in the garden.
Toby is of course a cute little visitor.
Hope Arthur finally gets his Mortadella...

Little humans can be quite scary for cats. The couple of times that I had children visiting, Luna went to hide as deeply under the bed as she could.

Our video this week might be a little bit disconcerting to cats as well, but it features at least one cat playing.

Arthur is too funny. Of course he had to christen his outdoor litter box!

Mr. G has us worried. Forgetting Arthur's Mortadella and rolling around with a strange (Mama says cute) creature? Hmmm...

We're so glad you had time in your lovely garden!

Share with human my purr angels, there are enough place for all of us!

Those tiny creatures are soooo strange, and apparently infected Mr G with it too! We'd steer clear for a while, too.

Humans are definitely weird, going ga-ga over mini humans, we run and hide when the bigger noisy ones arrive. We are glad that our mama and papa don't have any mini humans visiting too often.

I must say Arthur looks very offended at Mr G forgetting his mortadella!

Arthur, Rosie, Pookie and Kim you must get used to that little boy visiting. I hope you see him often and learn to make friends with him.

darn babies get all the attention...

We don't like mini humans - they get all the attention!
Luv Hannah and Lucy xx xx

Toby and Mr G are so cute together! Trixie hides when our grandkids come to see us and hisses if they get too close to her.

We've seen this strange behavior exhibited by Mr. G before. Mini humans seem to be the cause! :)

We hope you all have a great weekend.