At the beginning of last week it was very hot. Arthur thought he could cool down on the kitchen table, watch over the apples and still have the hope that Mr. G. comes by and gives him some mortadella, for that it's never too hot. 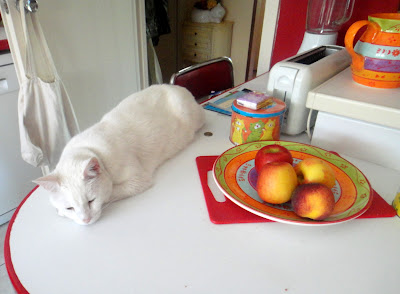 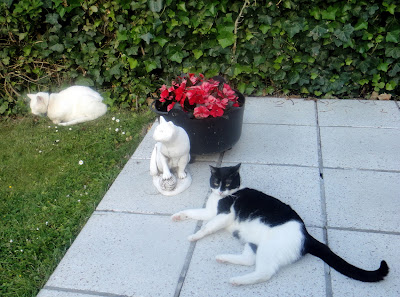 Since our living room had been repainted, it is not allowed to smoke in there anymore. No problem in summer because Mr. G. goes outside and of course the cats too, although they don't smoke (or maybe only behind my back) 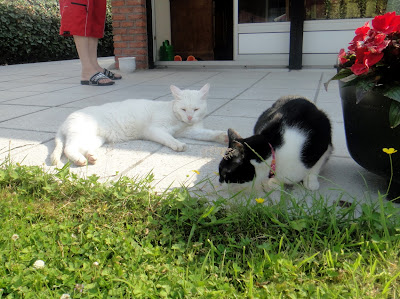 Here you see the culprit's legs, Rosie taking herself for a cow and Arthur just meditating about future crimes to commit. 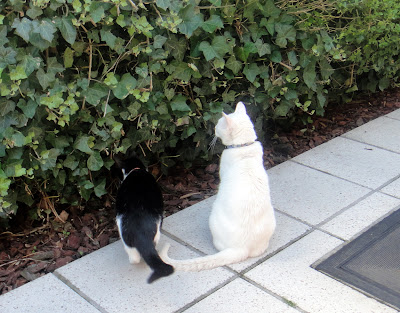 There was something going on in Dominique's garden ! They both watched intensively, I tried to look over the hedge to see if there was somebody, and suddenly a big pigeon flew over the hedge ! It's probably the one who took our garden table as its private toilet ! 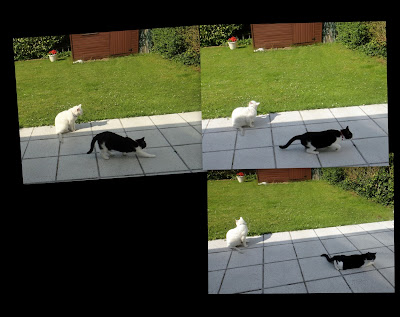 Because it was so hot, Rosie showed Arthur how to lay down with as little effort as possible. Arthur didn't even look, he prefered to scratch behind his ears. 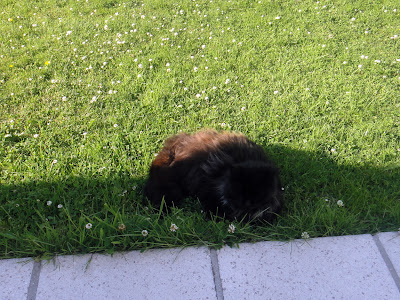 The whole day Kim is laying in the garden, she only changes spots from time to time, from a warm spot to a cooler one. For the moment she only comes inside when she is hungry. Strange cat. 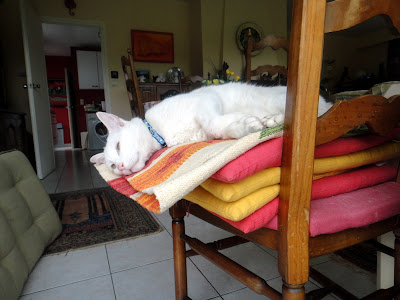 and then the weather changed and dropped by half. It rained and I had to put the garden cushions inside. Arthur found this a great idea, settled down and dreamed about better days. (or Mortadella !)

Please don't forget to see what the other kitties are doing !

Mommy giggled thinking about the cats sneaking a smoke...it's very hot here too and we are laying on the cool floor tiles.

Gattina, You are really funny. We cats don't do smoke behind your back but we can do something else..heh..heh .. Blowing heat !!!! ( I guess you know this word. We don't do by mouth but by butt..Ha..Ha )

Funny how all the cats deal with the heat in slightly different ways. :)

We especially love that picture of Arthur, waiting on the kitchen table for mortadella from Mr. G. :D

It's hot in here too kitties. We stay in the tiles all day. So hot.

Poor Arthur. It sounds like he never got his mortadella.

Bonjour GAttina and friends!The last picture is awesome, I think Arthur had a great idea, it's a cozy spot for a nap mainly in these rainy days!
I hope the weather can be better during this week.
purrs and love to you all
Luna

Love how Arthur is watching over those apples. I actually found Posky's little teeth marks in an apple in the fruit bowl once!

I bet they smoke, drink and do all sorts of naughty things when you're not looking :-)

Heeheehee. Just the thought of the cats sneaking a smoke made me laugh! The weather here has been really hot too and everyone's is way too lazy to move (including the humans!).

Arthur likes that pile of cushions it seems! Funny how they both went to the hedge to see the pigeon.

Of all, Kim is the smartest to relax on cool grass among those pretty little flowers.

I'm surprised only 2 went to spy on the pigeon! All 4 of mine would have gone for a little peek! Love your stories :)

It´s really hot and sticky weather here too :(
I´m glad that we have a AC to cool of under :)
So Arthur did you get any Mortadella ??!!
What do your mommie mean with that you are like a cow ??
Grass are nomnom to chew on and than you can deliver green furrballs on the floor :)
Lookes nice Kim to sleep in the shadow !!!
Happy tuesday to you all :)

What fun pics today. We love Arthur guarding the fruit best of all!

Arthur definitely blends into the table.
It's interesting to see how the cats deal with the heat differently. We had a rather hot weekend here as well.

I just love how all cats have individual personalities. Kim is so aloof; Arthur, mellow....