I had a quiet agitated week with my cats this time. We had noticed that Kim was again full of knots, and looked like a mop. Her fur was very thick, probably because the winter had been colder than usual. 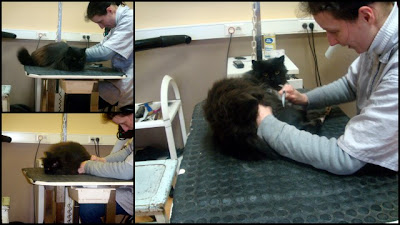 As none of us can touch her with a brush I took her too the groomer. It was a very hard work to get her in the cat carrier ! She slept in Mr. G's office, so we closed all doors except to the kitchen. Of course she felt that something strange was in the air so she ran in the kitchen and from there into the basement. But there too we had closed all doors so she was trapped on the steps. No escape possible and I could push her in the carrier. I tell you we were both exhausted ! 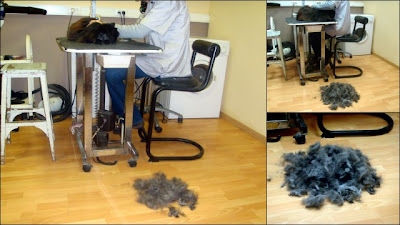 But it was worth the effort. There was so many fur coming out, I could have knitted sweaters for a whole army ! It's a pity that she is not a sheep.

It's also quiet offending when you see her there on the table. She purrs and makes "pasta" with her paws and the young woman told me that Kim is her easiest client ! She should see her at home ! Now Kim is a beauty again, but rather invisible. Once freed from her carrier, she disappeared in the garden. 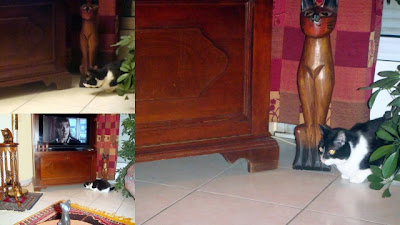 Coming next was Rosie bringing in a mouse. I heard bird chirping while we watched a movie, but it wasn't a bird it was a little mouse running through the living room followed by Rosie and hiding under the TV set. During the whole film Rosie sat there and watched, and then Arthur came too and they both waited for the mouse.

I wanted to safe the mouse so when we went to bed I closed all doors but left a little hole between the store and the window door so that the mouse could get out. I checked 3 times that I had no cat locked in the living room.

Unfortunately next morning when I opened the door, Arthur jumped out, I hadn't seen him and he had spent the whole night with the mouse enough time to catch and kill the poor thing. Mr. G when he sat down with his coffee found the mouse dead between his feet. Arthur is a generous cat he wanted to present him a morning gift. 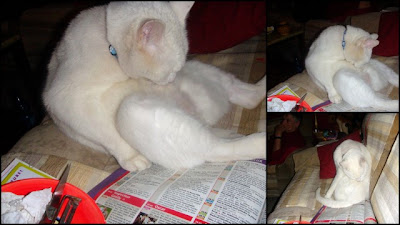 after the night with the mouse, Arthur had to clean himself before he started a long nap.

Pookie wasn't bothered by all these events, she did her Yoga exercises on my bed and continued to sleep.

Oh dear poor mouse - and clever Arthur. Generous too. Maybe since he's eating Mr G's sandwiches, this is Arthur's way of paying back. Looking forward to see a picture of your model cat with her new haircut!

Wow, lots of action going on at your house! I am not surprised Arthur got the mouse - he is bright like that.

Awwwww, poor mousie!!!!
I never thought that Arthur would have kill it!
I have to cut Lunas fur too. she has a lot of knots between her legs and under the tummy.
She is wild and never let me do the work.

Have a great day!

Pookie, we don't see enough of you, I think Arthur and Rosie are always stealing the show.

I'm glad that Kim is fine and beautiful! Poor girl!I imagine she is very sweet and now she deserves a good nap.What a story about that mouse, lots of adventures in your place! MOL
purrs and love
Luna

Oh miaow what a lot of fur !!!
I guess I´m not gonna complain when my mom is combing me :)

Yes, it's tiring catching the cat to put in the carrier.
Hey, with all that fur, you could make cat toy for them! Kim loves her groomer, huh? So you and Mr G are the bad guys! LOL!
Awww, Arthur loves Mr G. Look at Arthur's thighs -- fat turkey drumsticks!

You had a week of it for sure. I wait to see the outcome of the haircut when you are forgiven enough for photo's and Arthur was clever to hide so you could not find him. Poor mouse never stood a chance.. Hugs J xx

Poor Kim! My Snowflake worked out her kinks, but poor Lovey (also long haired) is in knots now.

Kim, I am so sorry about your tangles. I've got very long fur, too, and Mom says I am her first long haired cat that doesn't get tangles. (Maybe it's the snack oils on my tongue.)
Mandu