CATS ON TUESDAY - Winter time and a miracle

Since it is wet and cold outside, Arthur imitates the bears, he retired in his winter sleep. He became a real boring cat. He doesn't play the clown of the house to amuse ourselves and doesn't visit the neighbors either because anyway they are inside too. 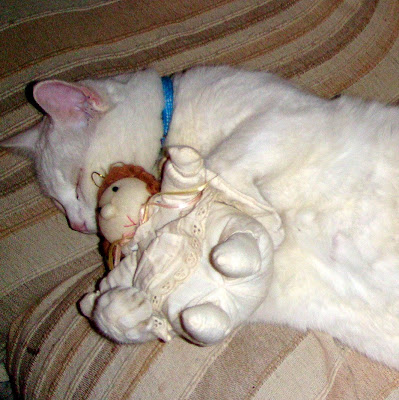 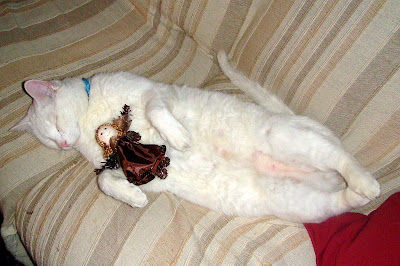 To amuse ouselves at least a little with this normally so entertaining cat, I decorated him with angels, but even that didn't wake him up !

Rosie is far better ! She at least is very busy with her mousies, I had to replace them all, because she had bitten off all tails and chewed on the rest. With 6 new mice she has a lot of work now to range them every evening around the bowls in the kitchen. 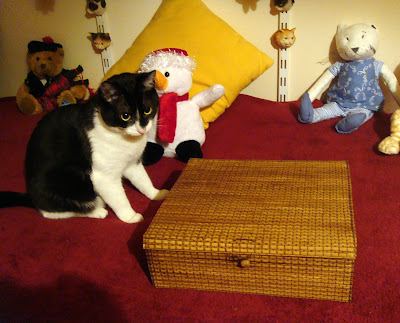 I bought this box, here checked 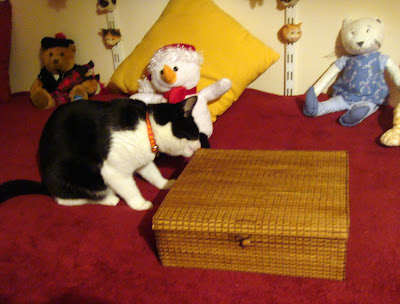 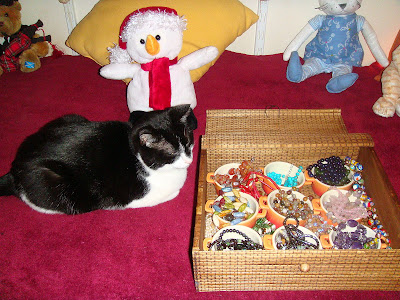 and approved by Rosie. I had put 9 little bowls in there and each contains one or two collars. 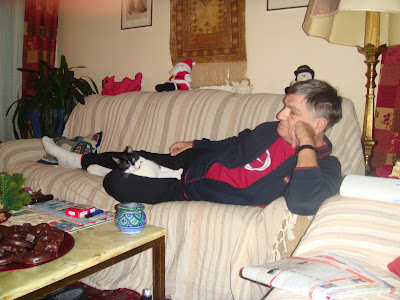 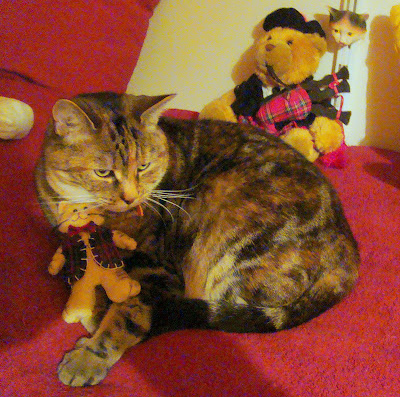 A miracle happened ! After one year of being angry with me because I brought Rosie in the house, Pookie moved back on my bed ! she even stays there again over night and she says nothing against Rosie who sleeps there too. They just ignore each other, but it works ! I am really happy about it !

I am so glad Pookie stays~!
This is really the best news of this year~!!! How wonderful~!!!!!
I think Rosie is growing and Pookie must has been thinking about this.
They will get closer, not one day or two. But one year or two. But it's fine, we can always have patient to wait :)

I am so happy for you that Pookie is back to her friendly self. What a lovely Christmas gift!

With all that hibernating, maybe Arthur is a bear?

I am glad to see Pookie is feeling
like her old kitty self! Since Miss
Nelly moved in, it has been kitty
play time. Everyone seems to be getting used to her! That's my
miracle this holiday season! :)

Ha ha! To think that cats also like to hug stuffed toys! Ha ha. Merry X'mas to U, ur family & also ur cats!

Isn't it funny how cats can hold grudges then, when it suits them (or when it gets cold), all is forgiven.

I´m so glad to read that Pookie moved back. So I can hope that it will be better with Luzie and Olli too.

Oh it is the same here with the older cats. They also sleep all the day here in the house in Winter. Olli is not yet outside. He don´t want to go out. but he is a active cat in our house. He plays arround all the day with all toys we have. Luzie and Luna never play with toys.
But of course I enjoyed the sleeping pictures of Arthur

Pookie! At last change has happened!

Well... it is that time of the year. I love the idea of decorating Arthur with Angels!

Glad to see that everyone is enjoying the indoors in the cold, each in their own way. And it looks like things are forgiven or at least forgotten with Pookie.

I'm so glad that Pookie is not mad at you anymore. That is a nice Christmas treat!

Arthur and Lucy have a lot in common, she barely gets out of bed all day!

gattina!! how did I miss this!!! where have I been? this is so wonderful

I love that Pookie finally is forgiving you for Rosie

I have a similar problem with Siren and Mia.

YES!!! I am happy too that Pookie is back on your bed WHERE SHE BELONGS, with her adoring mum!
Arthur is silly. Winter makes us soooo *yawn* lazy too. Even Pierro comes to sleep near me. No sun... soo dreary.
Rosie is your little helper and she likes jewelry too. girls...
I love your box, and it displays everything beautifully!